The third stop on our recent Euro trip was Lake Como, Italy. This has been an area that Alex especially has wanted to visit, as his great uncle Larry has a home there. Lake Como is situated in the northwest section of Italy and borders the Swiss Alps.

The lake is massive – something like 30 miles long and 3 miles across. There is an excellent ferry service that provides transportation across the whole lake, which is helpful to get from one village to another, given the size and landscape of the lake. It is hard to describe the beauty of Lake Como because there really is nothing to compare it to. Looking out across the lake you see giant grassy mountains protruding thousands of feet up from the water. The shore is dotted with small Italian villages that hug the water’s edge, not climbing too high up the steep mountainside. 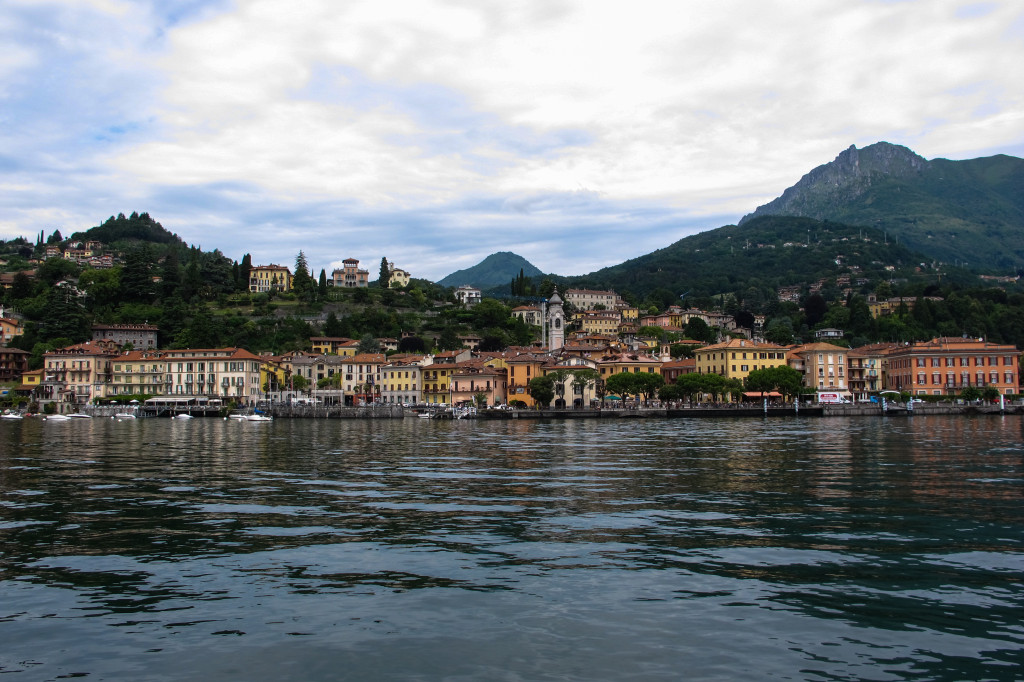 The water itself was constantly moving, waves crashing on the shore, sounding more like an ocean than a lake. Lake Como is the vacation home to the rich and the famous and has been the stage of several movies, including Casino Royale. 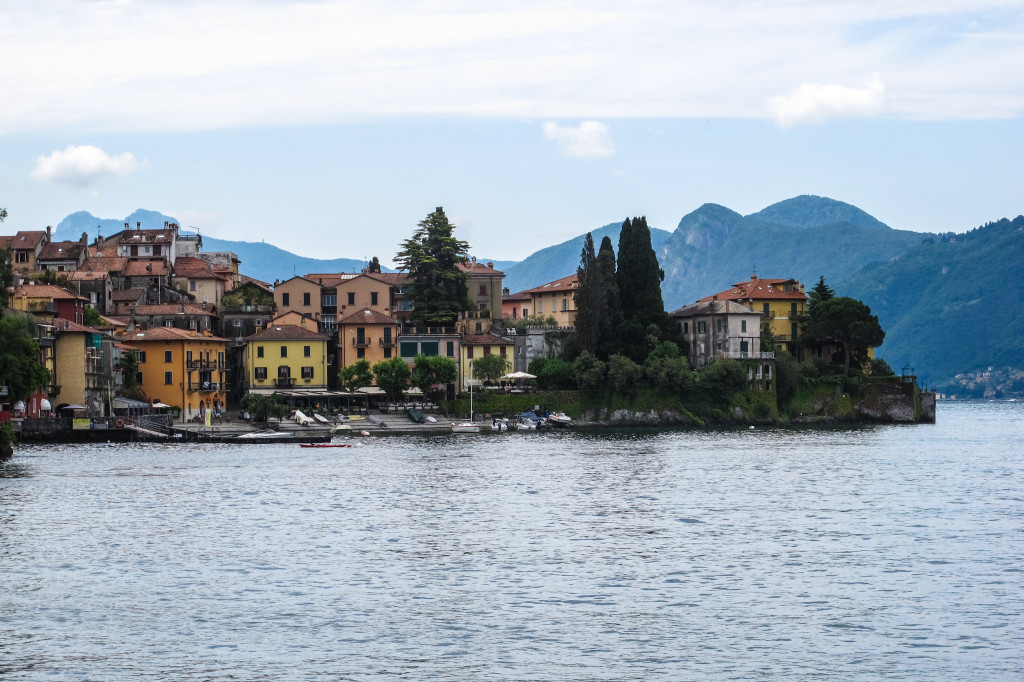 We arrived in Lake Como on a Sunday evening in the middle of July. The route took us through switchbacks and more than 10 tunnels before we arrived at Hotel Meridiana in Bellano, Italy. It was not the most pleasant of drives, given the topography, but Alex had fallen ill earlier in the day and spent the whole car ride nauseous and vomiting. Thankfully, though, he said the excruciating drive was worth it for the magnificent view we had once we arrived. He was back to himself by the end of the day.

Since we were all together at Alex’s sister’s wedding in Arqua Petrarca the day before, several of Alex’s family members, including his parents, Nana, Aunt Chris, Uncle Mike, Cousin Emily, Uncle Dave, Aunt Katie, as well as some family friends, Barb and Donna, made the journey over to Lake Como by train to join us for a few extra days. Alex’s great Uncle Larry and his wife Jayne have a vacation home in Bellano, the town we stayed in, and they were able to schedule some time there to overlap with our trip.

The first full day in Lake Como the rest of the family set out to take a ferry over to Bellagio to check out one of different villages, while Donna, Stan, Alex and I attended a cooking class. As a thank you for helping out with the wedding, Alina and Alberto gave us the cooking class as a gift. We were picked up by Moreno, the owner and chef, at our hotel and taken to his home and restaurant in the next village.

We were greeted with coffee and cookies {aka breakfast in Italy} by his wife and joined about 10 other cooking class attendees. 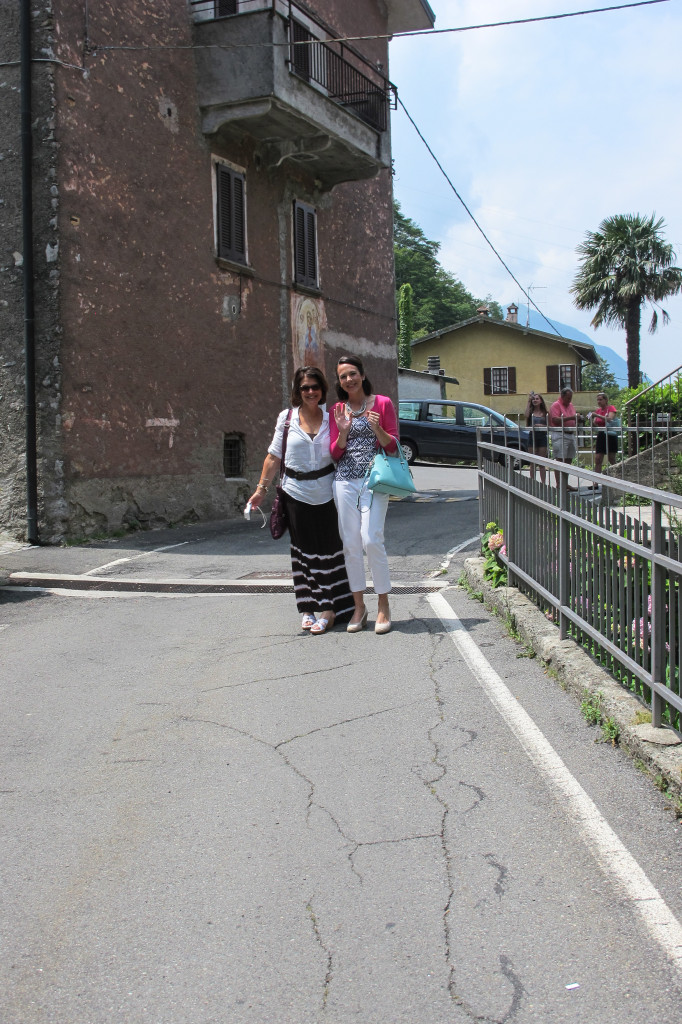 The class turned out to be more of a demonstration than a class, which at first I was unsure of, but then Moreno proved to be extremely entertaining and I really just enjoyed watching him do all of the work. He showed us how to make pasta dough, then while that was resting he prepared an herb roasted turkey breast and au gratin potatoes. In the middle of the class we were served a snack of prosciutto, cheese, crackers and bottomless wine.

Moreno showed us how to make a filling for our tortelloni {tortellini = small filled pasta, tortelloni = big filled pasta}, which consisted of milky ricotta, herbs straight from the garden and a smidge of garlic, but only rubbed around the inside of the bowl. We got to participate in shaping the tortelloni, which was good practice for when I prepare these dishes at home. Finally, he whipped up a butter and leek sauce for the tortelloni, cooked the pasta and served our first course. 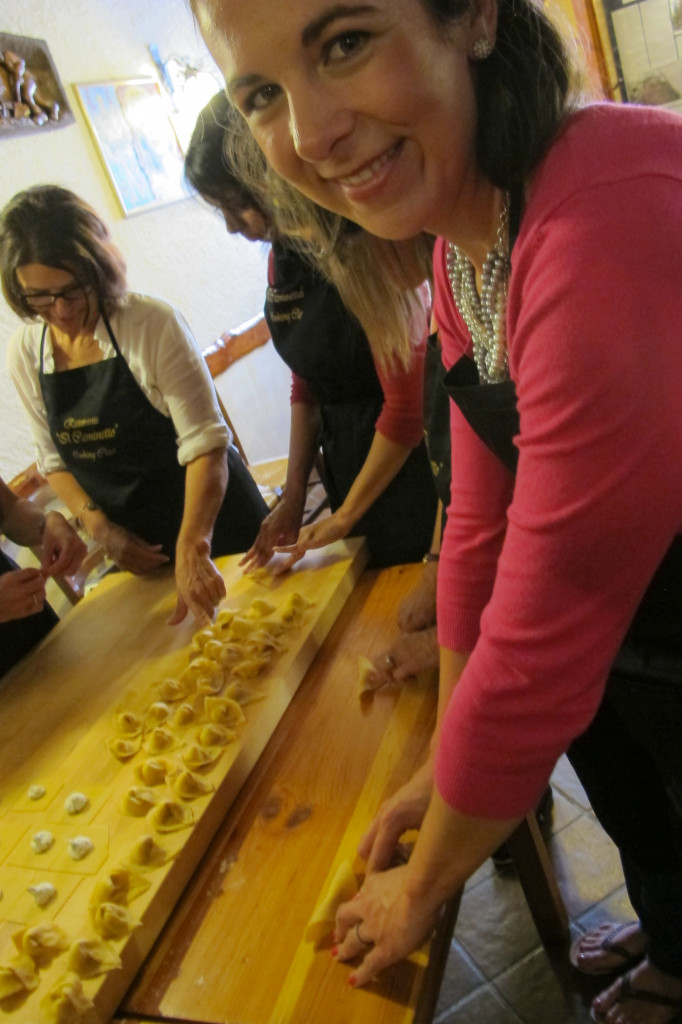 We all loved the freshly made pasta – that was my favorite part of the meal. Shortly after finishing the tortelloni we enjoyed the roasted turkey and potatoes. It didn’t seem terribly Italian but apparently it is. I am looking forward to making that at home.

One of the other attendees asked him about making a tomato sauce and instead of telling her how to make one he brought out the fresh ingredients and showed us all how to make tomato sauce.

Moreno is an extremely genuine person who clearly loves food and making people happy. He is hilarious, so that was just the icing on the cake. We had such a great time in the cooking class, which turned out to be one of the highlights of our trip. 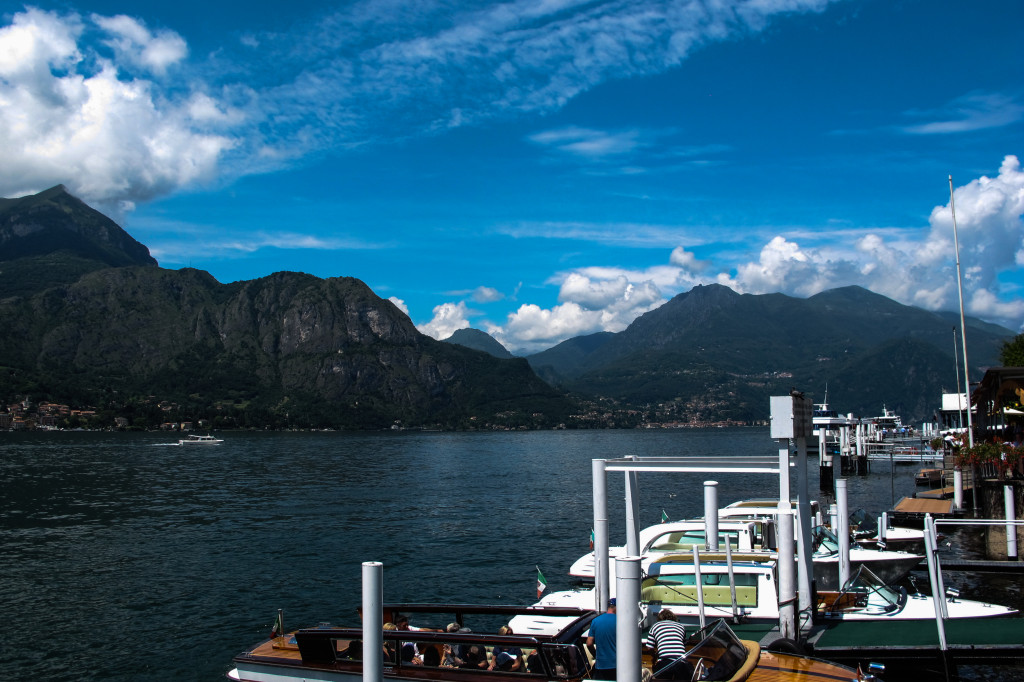 That evening Uncle Larry and his wife, Jayne, met us down at our hotel for dinner. We sat together at a long table overlooking Lake Como, watching a storm roll in. Thankfully we all made it back from our adventures before the sky broke loose. There was squall after squall of high winds, fierce raindrops, cloud to ground lightning and loud claps of thunder that kept rolling through all night. I enjoy storms and it’s pretty neat that I can say I watched one roll its way across Lake Como.

Throughout the week both Nana and Larry were feeling very nostalgic and shared many memories of their childhood together. We learned that their father was held as a prisoner of war and after he was released he ended up going to work for his captors on their farm with his family in tow. Nana’s given name was Desalina, which I knew, and her father crossed it out on her birth certificate and changed it to Maria, just like that. I had always thought she changed it when she and her husband moved to the US.

We also learned that their family’s surname was originally Iori {pronounced your eye} and they quickly changed the spelling and pronunciation to Yori {pronounced your-ee} after Larry got repeatedly punched in the eye by the Brits saying that his eye was theirs. Alex and I really enjoyed hearing Nana and Larry lament on their childhood stories all week long. We were happy to be a part of their reunion, as well. 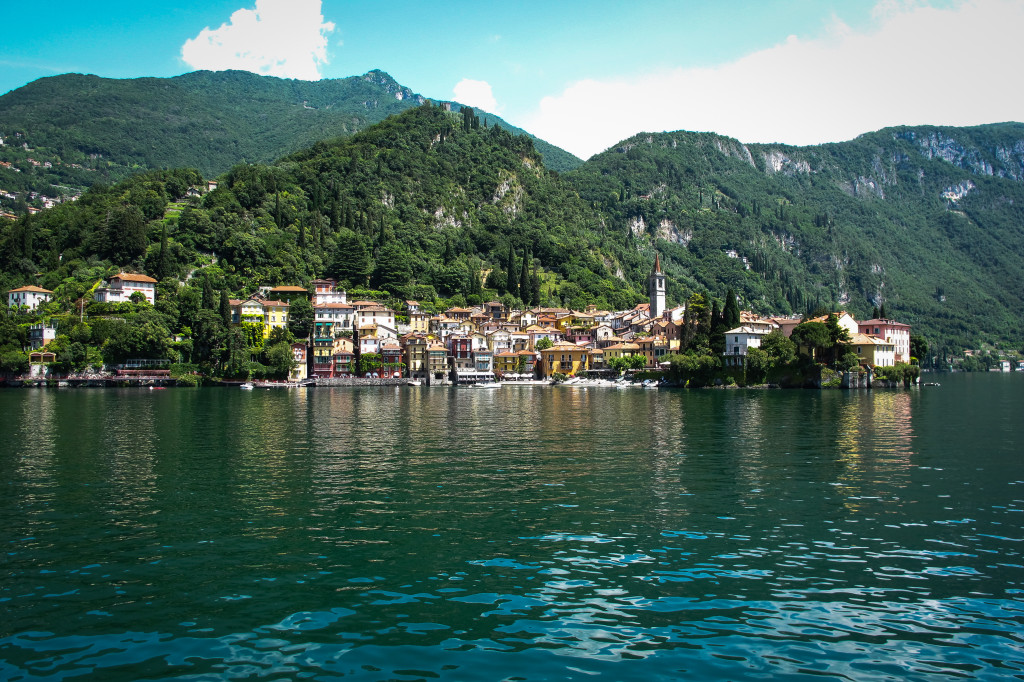 The next day was Tuesday and Alex and I decided to take a few hours to ourselves and head over to another village for the afternoon. We hopped aboard the ferry and enjoyed a lovely boat ride across Lake Como to the darling village of Bellagio. Some time when we were aboard the ferry the clouds parted and the sun found its way out. It turned into a spectacular day.

Alex and I loved strolling through the narrow cobblestone streets of Bellagio, poking our head into a few shops and admiring the pink and orange facades that made up the cityscape. Everywhere we turned boasted a view of Lake Como. 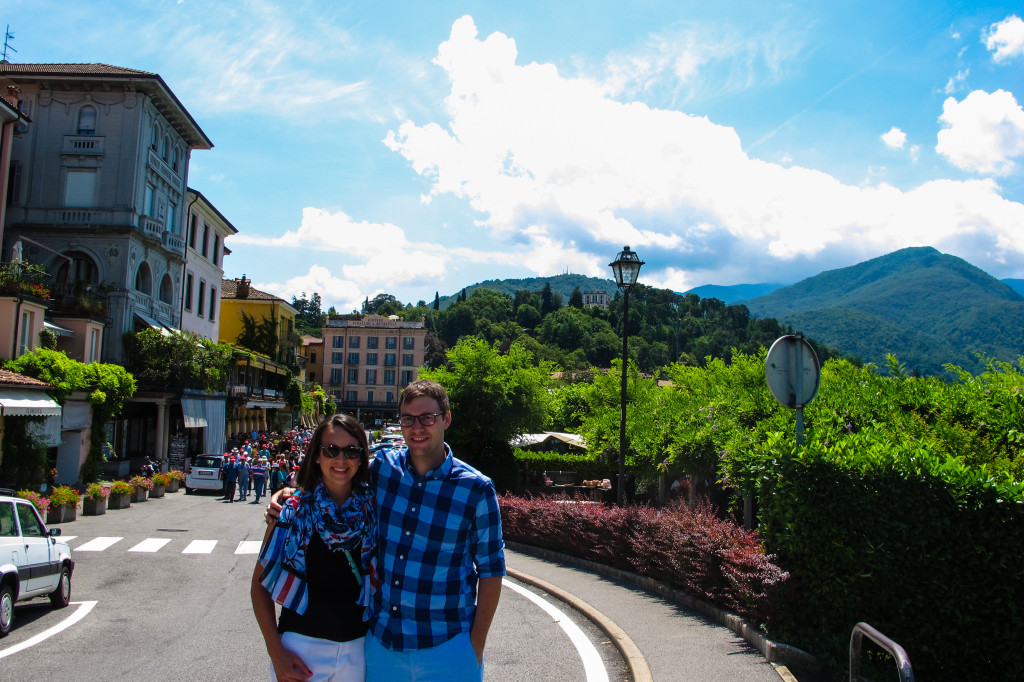 Our ferry ride back to Bellano was quite enjoyable. We found some seats on the sundeck and basked in the heat of the day. When we arrived back at the hotel we were greeted by the family outside sunbathing next to the lake. They had all just taken a dip in Lake Como together. We quickly retreated to our room to grab our bathing suit and join them. While we were looking forward to the evening ahead at Larry’s home, we were perfectly content spending as much time in the sun as possible. 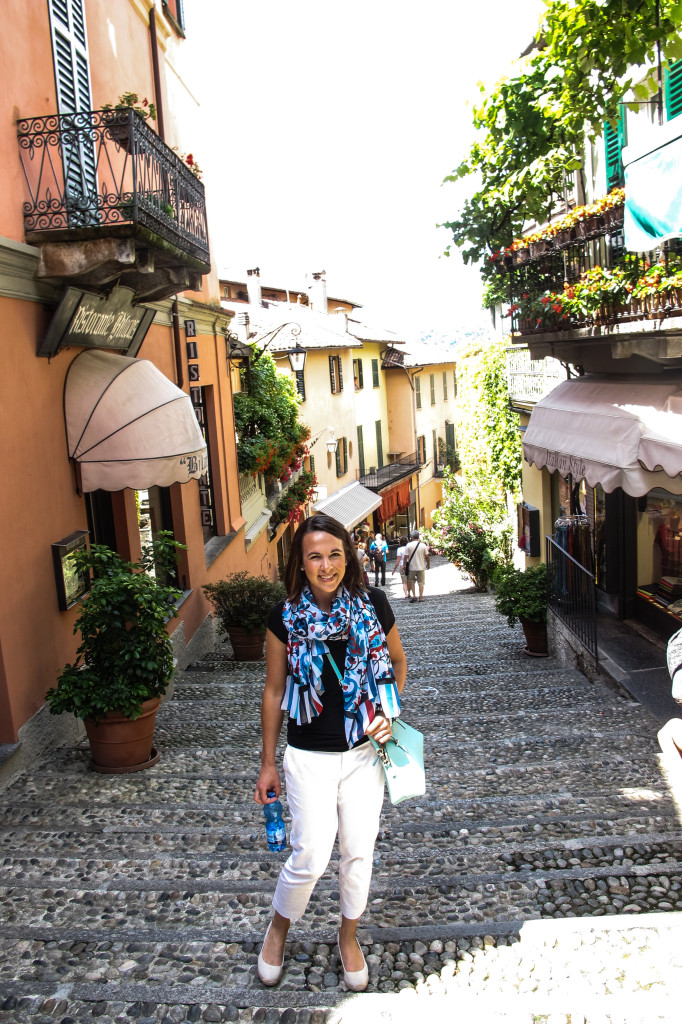 One thing I have heard Alex speak of for much of our relationship was his great uncle who has a home on Lake Como. Needless to say, he was very excited to get a chance to see this home for himself. Larry and Jayne’s home is situated up the hill with a 360 degree panoramic view of Lake Como and its surrounding area; it has a veranda that circles the entire house. If I lived there I don’t think I would feel the need to ever go inside. Nonetheless, Jayne has a beautiful state-of-the-art kitchen at her disposal. The kitchen has bright red accents and clean stainless steel furnishings. An Italian’s dream! 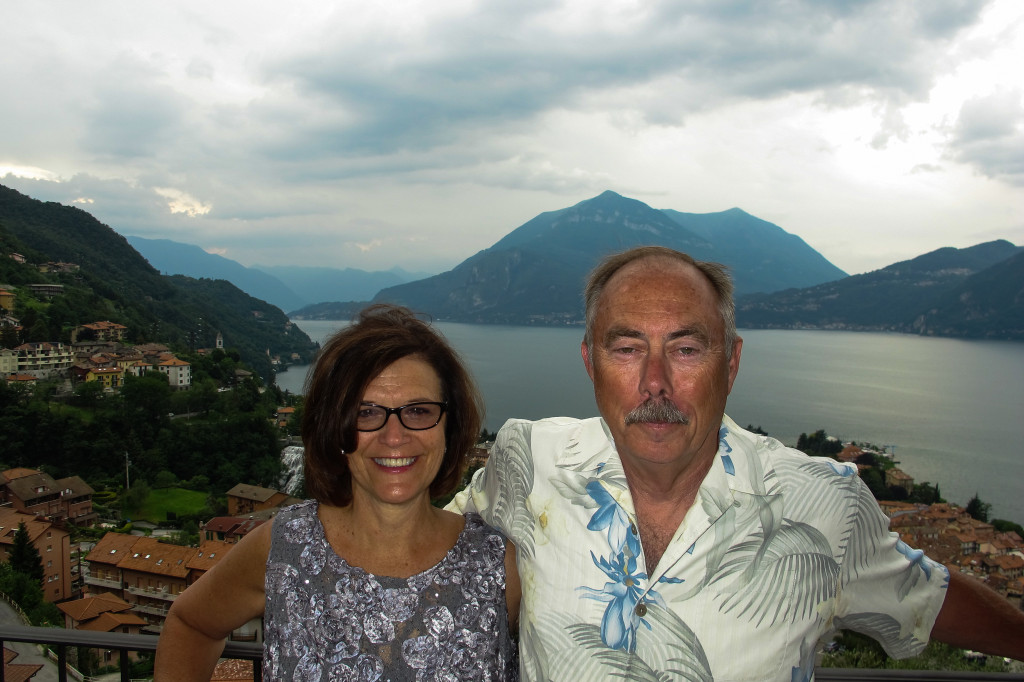 We were spoiled by Jayne’s culinary skills throughout the evening as she continued to feed us small bits to tide us over until the pizza arrived. Would you believe that Italian’s, too, order delivery pizza? We all were enjoying the view too much to want to leave and go eat inside a restaurant.

The evening was quite lovely. Larry serenaded us with his accordion and showed us photos of some old cars he had restored. We heard more stories of Larry and Nana’s childhood together, as well as how he and Jayne selected the plot on Lake Como. Somewhere along the line a burst of rain came in, and no sooner was it gone, leaving a vibrant rainbow in its shadow. We even got to see a double rainbow for a short time. Quite an evening, to say the least. 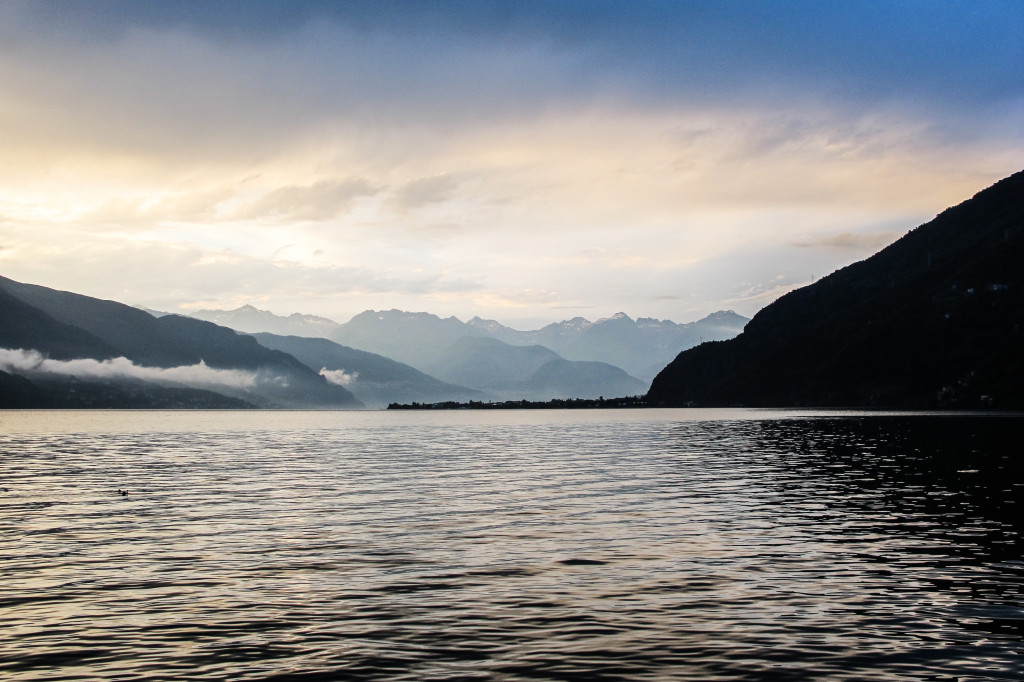 Our trip in Lake Como was a wonderful end to the Italy chapter in our journey. The next morning Donna and Stan graciously drove us across the border to St Moritz, Switzerland.