Italian’s know how to eat and they know how to have a party! We recently attended Alex’s sister’s incredible Italian-American wedding in Arqua Petrarca, Italy. Alina’s now husband, Alberto, was born and raised in a town not far from the village where their wedding took place which is what inspired the exotic destination. The newlyweds met in New York a few years ago when both of them were attending graduate school. Alberto had no plans to stay in the U.S. but Alina quickly changed his mind. 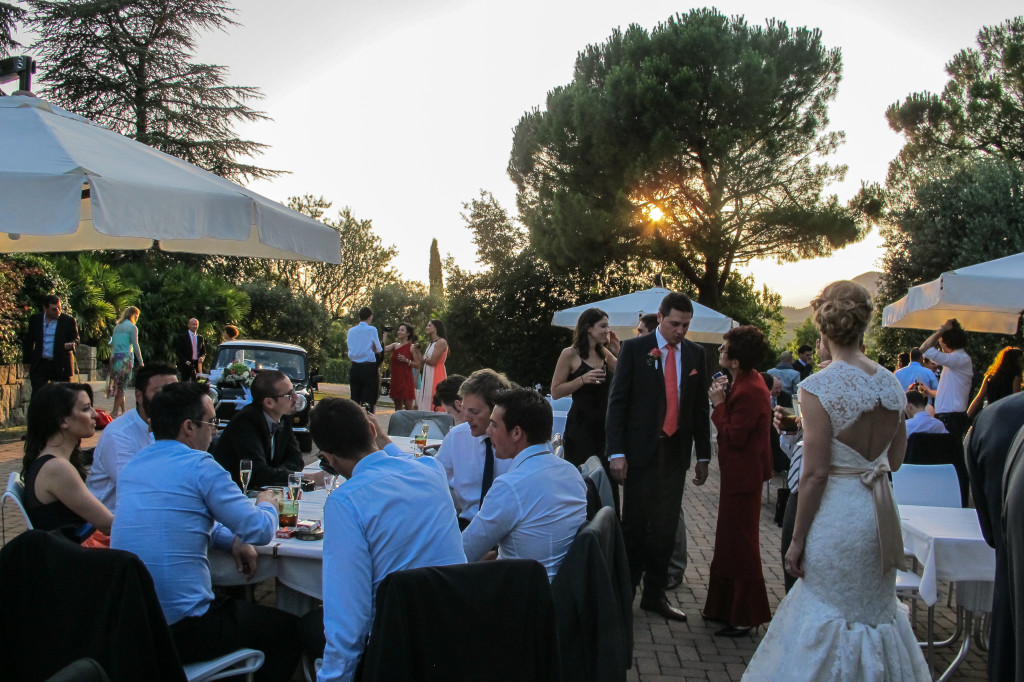 The wedding was a mix of Italian and American cultures and it seemed like it highlighted a lot of the best of the two. The wedding ceremony was a traditional but abbreviated Catholic mass. Alina and Alberto did not see each other until they met at the altar and boy was Alina a stunning bride. 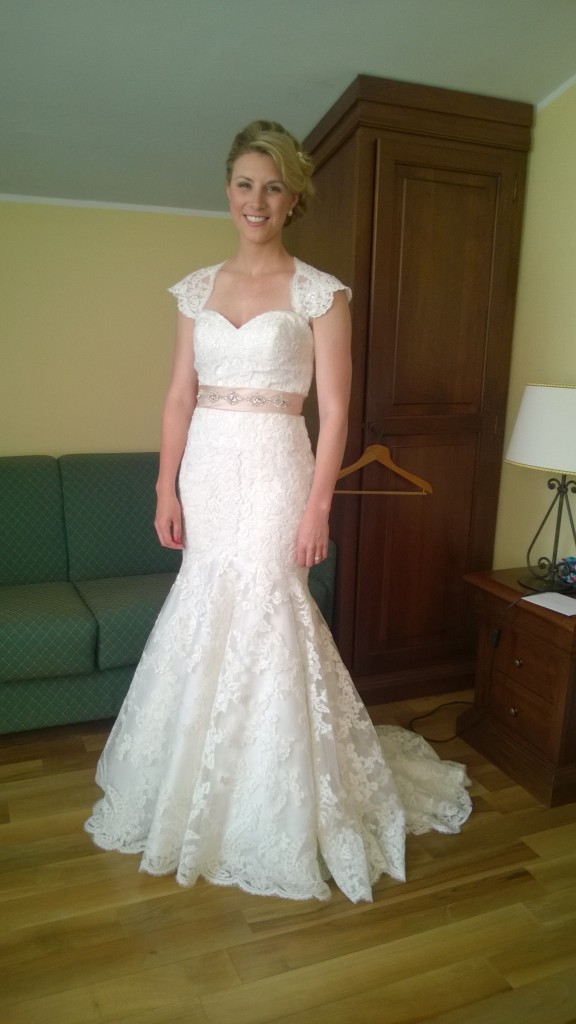 The church where the wedding ceremony took place was in the quaint town of Arqua’ Petrarca. The church itself is 900 years old. It has a gray stone façade and boasts a lovely view of the town.

In Italian weddings they do not have bridal parties, so there were no bridesmaids or groomsmen. Alex and I were honored to serve as Alina’s witnesses; however, and two of Alberto’s friends, Giulia and Lorenzo, were his witnesses. 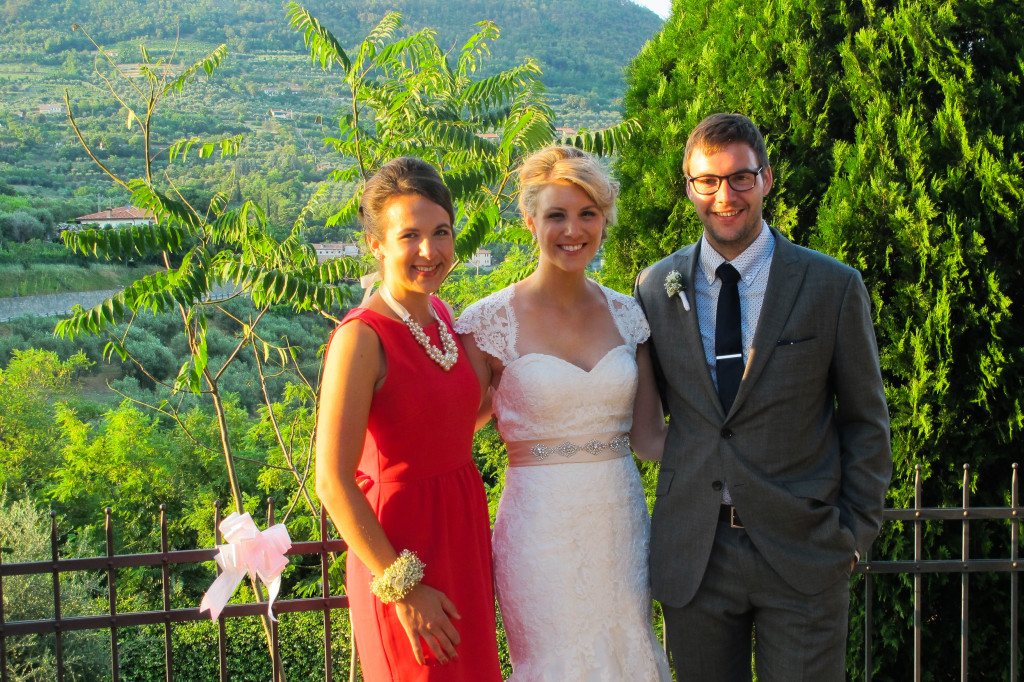 After the ceremony we relocated to Villa del Poeta, the hotel the Americans were staying and the site of the reception. The reception took place out on the veranda which overlooked the Colli Eugene valley. It was a quintessential view of Italian wine country with the fields of grapevines, rolling hills and small Italian-style homes scattered about the countryside. The veranda was extremely large and dotted with olive trees. 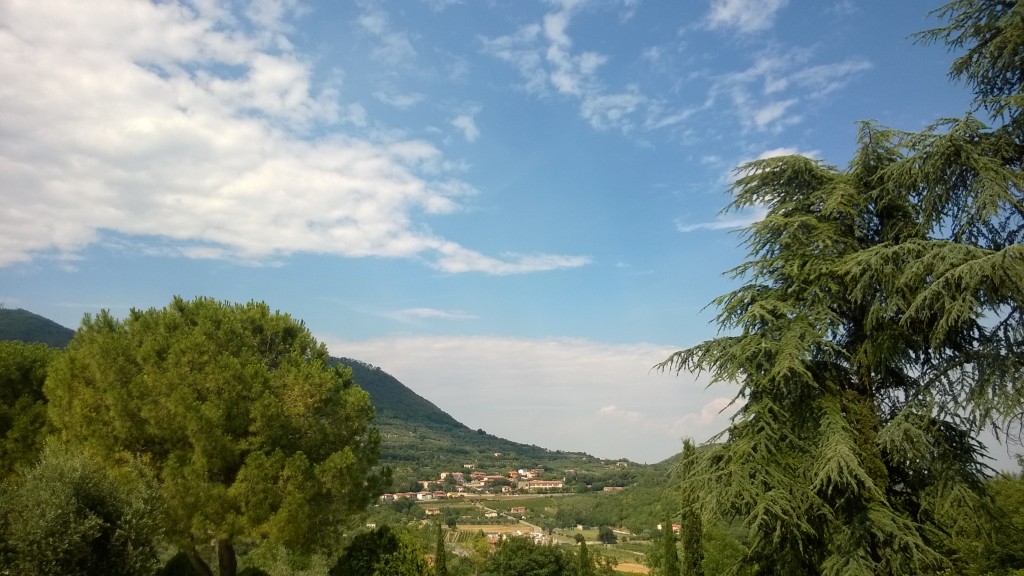 Upon our arrival at the reception we found two enormous tables covered with plates and trays of appetizers, as well as a cocktail table that hosted spritz {aperol, Prosecco and soda water – a drink that is traditional to the region} and Prosecco. We were overwhelmed by the selection of food. There were probably 30 different appetizers to choose from, including, of course, cheese, prosciutto, breads, bruschetta, fried olives, fried zucchini and some crostinis with various spreads. Everything was terrific.

We mingled until around 8:00 when we were shuttled inside to begin the four hour long dinner.  Did I mention that the Italians love to eat?

Our dinner began with a vegetable risotto for the first first course {yes, there were two first courses} and was followed by a delicious ravioli. The first second course was an incredible pork dish with a thick and flavorful demi glaze and the most amazing roasted potatoes on the side. The second second course was beef Wellington.

Throughout dinner, the Italians kept starting cheers and chants and singing songs to get everyone excited about Alina and Alberto.

After the meal we headed back outside for cake and the fruit course, and of course dancing.

Alina and Alberto’s first dance was so fun to watch. They put together a compellation of a few different songs and choreographed a dance. From there, the rest of the reception was a mix of dancing, chatting and random pranks and jokes from Alberto’s Italian friends. It is an Italian tradition to play jokes on the bride and groom at the wedding, and Alberto’s friends pulled out the best ones. They wrapped Alberto up in saran wrap then put a silly hat on his head with a lit candle attached to it and gave the bride a squirt gun to put out the flame {yes this is normal, I guess!}. They also lined up 8 or 10 ladies and blindfolded Alberto to see if he could pick out which foot was Alina’s. Alberto remained a very good sport throughout the evening charades. 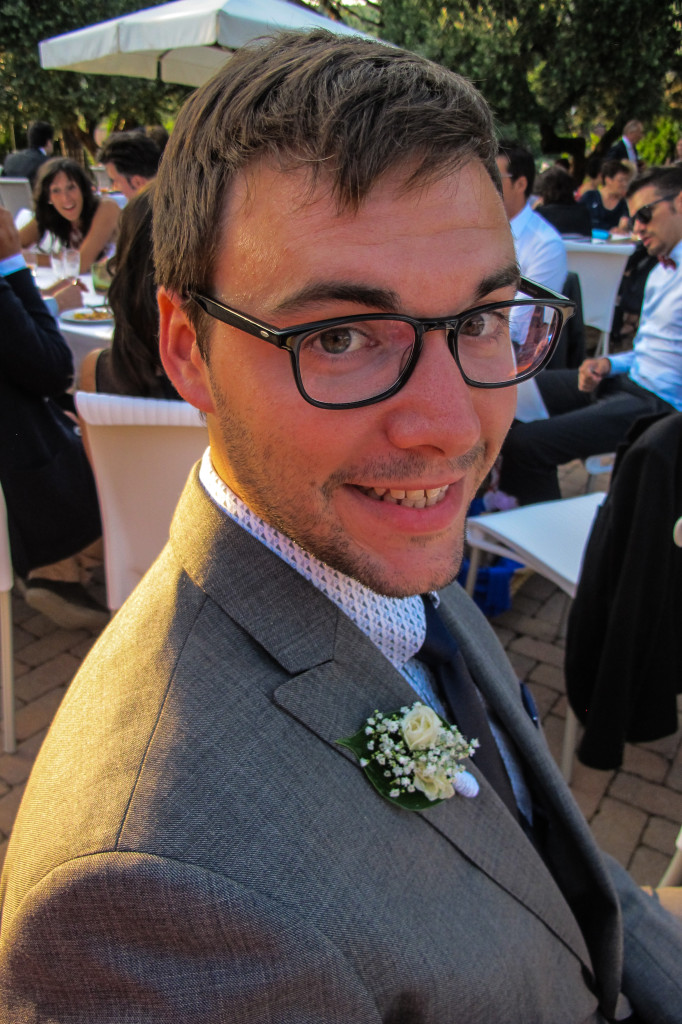 In Alberto’s family no one had ever attended a wedding with a DJ, but needless to say his friends and family sure knew how to bust a move. The wedding wrapped up around 3:30 a.m. when everyone decided they had had enough and were ready for bed.

We had such an awesome time at the wedding. It was so fun to spend the day with my sister in-law and help her get into her dress and go get our hair done together. Everything was incredible!