The second to last stop on our trip to Europe was London. Neither Alex nor I had been to London before and both of us were really looking forward to a change in culture and cuisine. 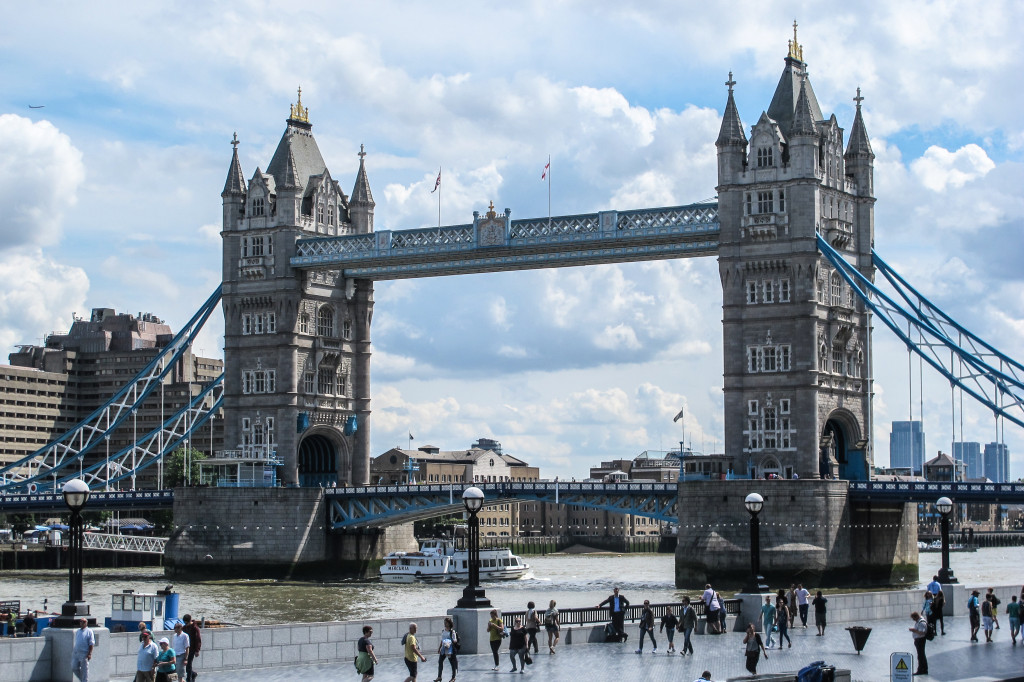 The trip to London started in Alicante. Not having had our coffee yet, were off our game that morning. We didn’t have enough cash for the bus so we ended up having to take a later bus, making us a little frazzled. Once we flew through security and settled on a place to have coffee and breakfast we also realized that we were short on cash yet again. Thinking it was a give a penny, take a penny jar, Alex grabbed a few coins and handed them to the cashier who looked at him shaking her head. Indeed it was her tip jar.

Once we had our coffee things were a bit more smooth but it was a much longer and more tiring travel day than we had expected. I forgot that we had a time difference so the flight was twice as long as I had expected it to be and then there was an enormous amount of walking once we landed in London. It was all worth it, though, because we both loved the city.

Upon getting checked in at The Beauchamp Hotel in the Bloomsbury neighborhood we set out to find ourselves some lunch, now that it was 3:00 and I was hours past the point of being hangry. We found a cute British pub not too far from our hotel that we settled into. We eventually learned that there is a restaurateur in London who buys the greatest pubs in town and produces the same mediocre food at each location. 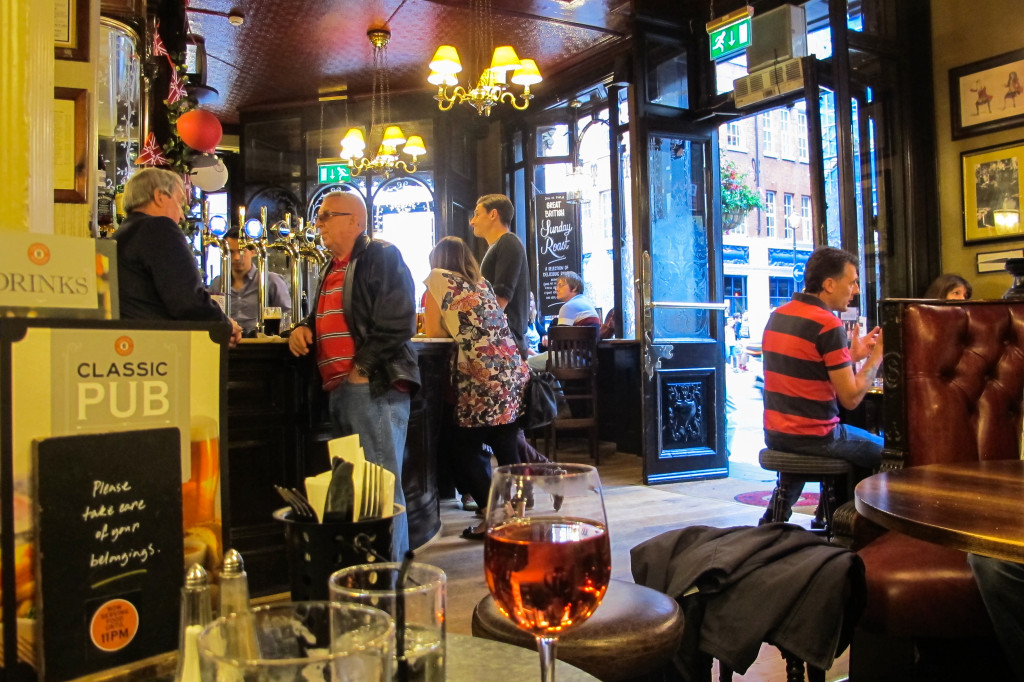 With full bellies we were ready to take on the city. Except it was raining. We headed back to our hotel to get unpacked and come up with a game plan. 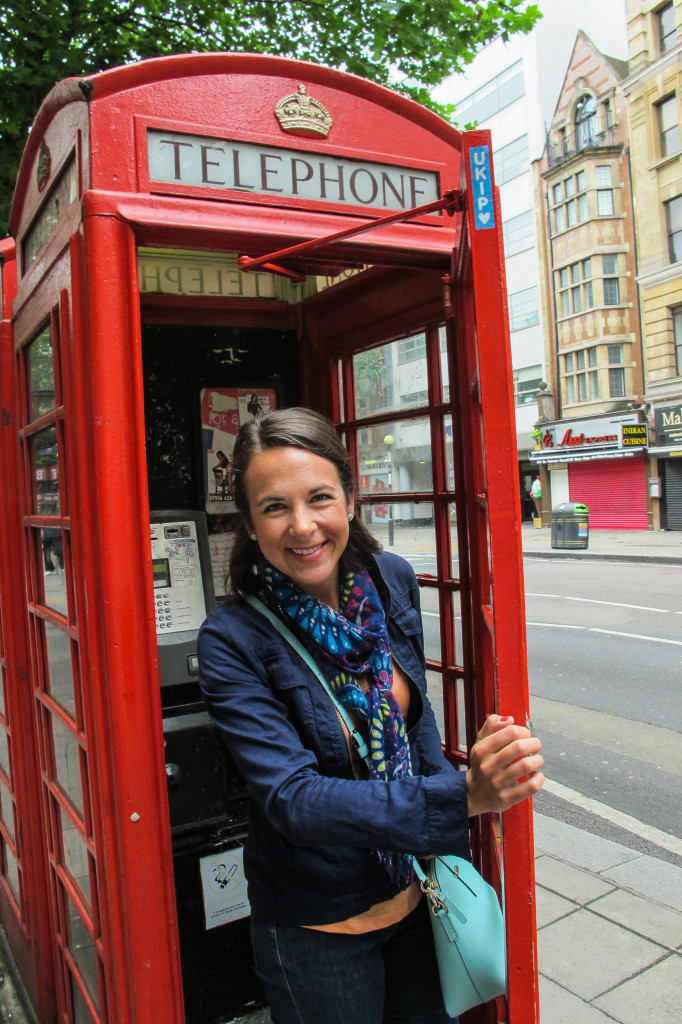 Our first dinner in London was much better than our lunch. We found a quaint little restaurant called Mother Mash that specialized in bangers and mash. You got to pick the type of potato, sausage and gravy for your mash and then a delicious plate of your custom creation arrived at the table. 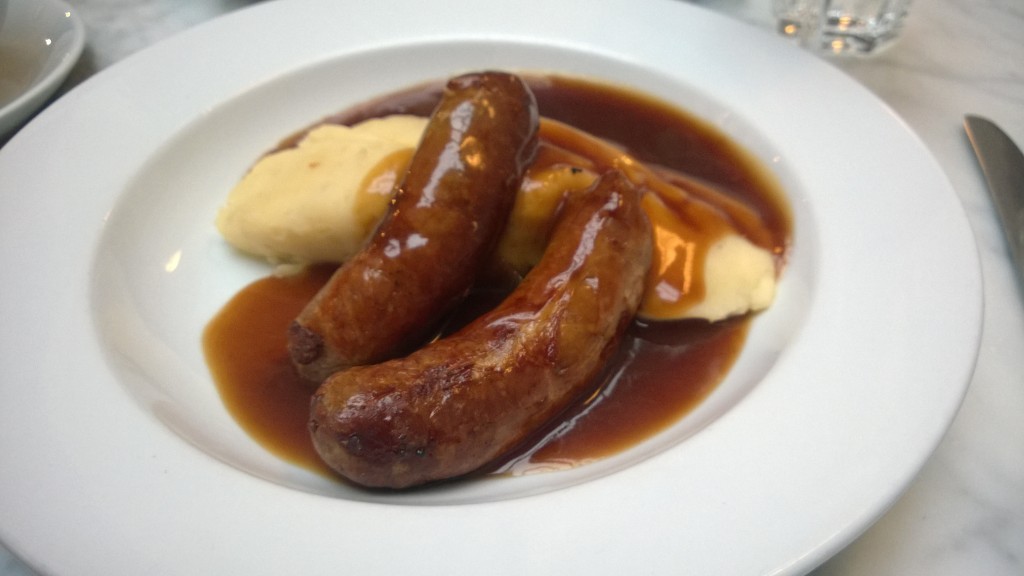 When we woke up the next morning we were pleasantly surprised to find a note from the hotel manager apologizing for the fact that our shower had fallen apart the night before so he decided to comp our WiFi {this was the only hotel we stayed at that didn’t have free WiFi} and give us breakfast each day. We really appreciated the gesture, especially since the breakfast was really good and saved us a fair amount of money.

Our first day in London was a very busy one. We started by walking to Trafalgar’s Square and taking in our surroundings while en route. We stopped for a few photos at an iconic old phone booth and took a picture of a double-decker bus. Once we arrived in Trafalgar’s Square we realized that the Tour de France was slated to pass through London the next day. Who knew that the Tour de France wasn’t just in France? 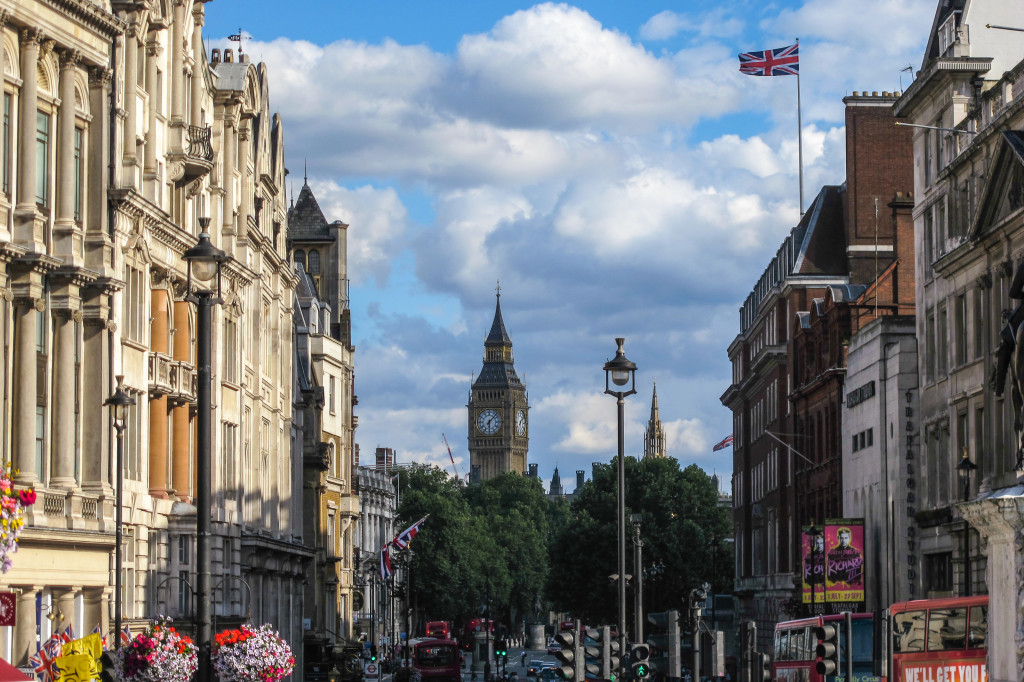 From Trafalgar’s Square we set out towards The Mall which led up to Buckingham Palace. 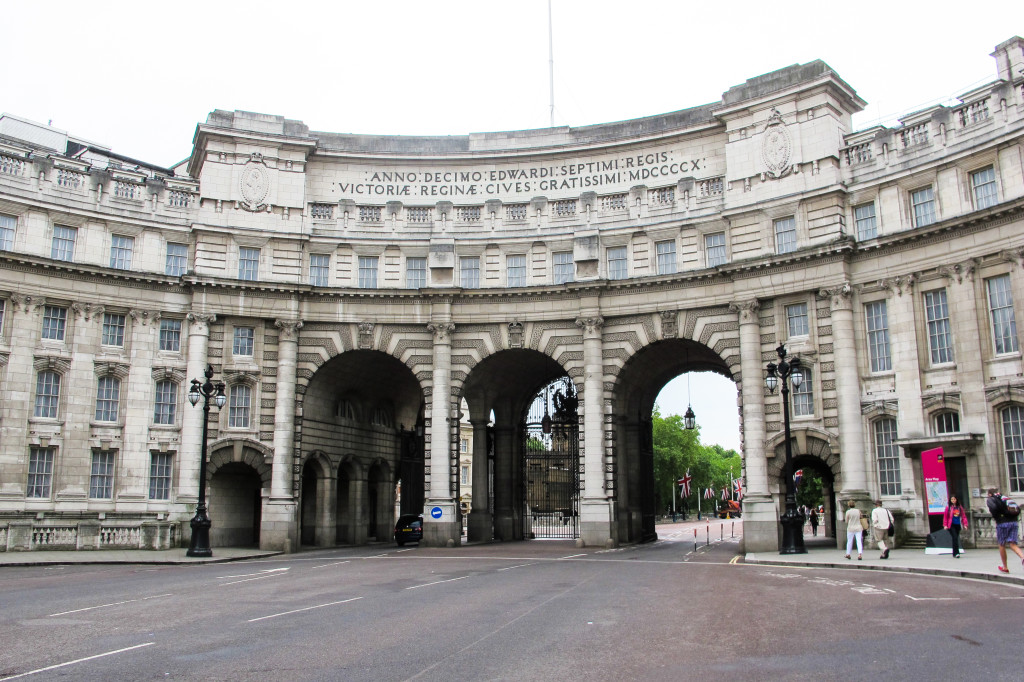 We saw the marching band passing by on its way to collect the new horses as we made our way to the Palace. We arrived about an hour or so before the changing of the guards took place and thoroughly enjoyed some good quality people watching.

The police officers were very patient in managing the crowd of what they called 10,000 people, but nonetheless, it was quite hilarious watching a bunch of gaping tourists all with their phones, cameras or iPads sticking up in the air trying to get a good picture, all while missing the action on its own.

The changing of the guard ceremony was fun to watch. We saw the two different bands and guards approach, both playing different music and entering at different times.

We weren’t able to see the actual changing of the guards, mostly just the guards marching inside the palace walls. It is definitely something to do while in London.

Hungry, thirsty and tired, we headed to Harrods to explore the luxury department store and have lunch. I was surprised how packed it was, but I suppose, just like us, everyone wanted to see the hurrah of the famous store for themselves. 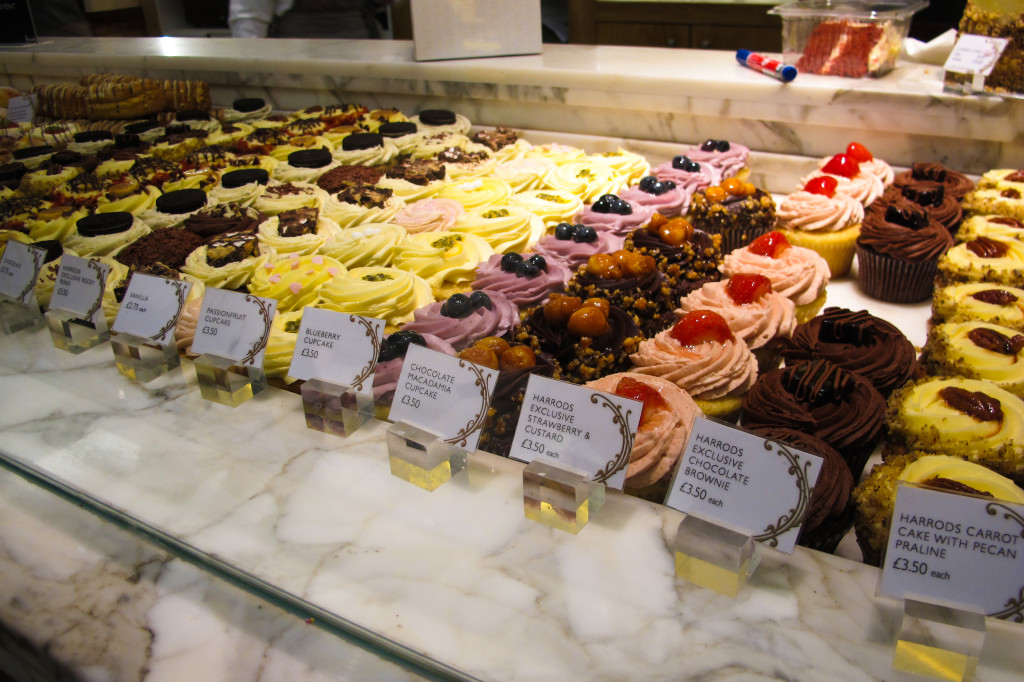 We walked through the luxury accessories department, which puts Nordstrom to shame, then came upon the deli and bakery. I have never seen so many perfectly displayed pastries and cupcakes. They were stunning. What we were really interested in, though, was the wine shop. Harrods has a famous wine selection. We also found a little wine sniffing kit that comes with 50+ different jars of aromas found in wine. This is to teach your senses what scents you would find on the nose of a wine. The kit comes with an explanation of the scent and also a list of wine varietals and regions you would find that aroma in. 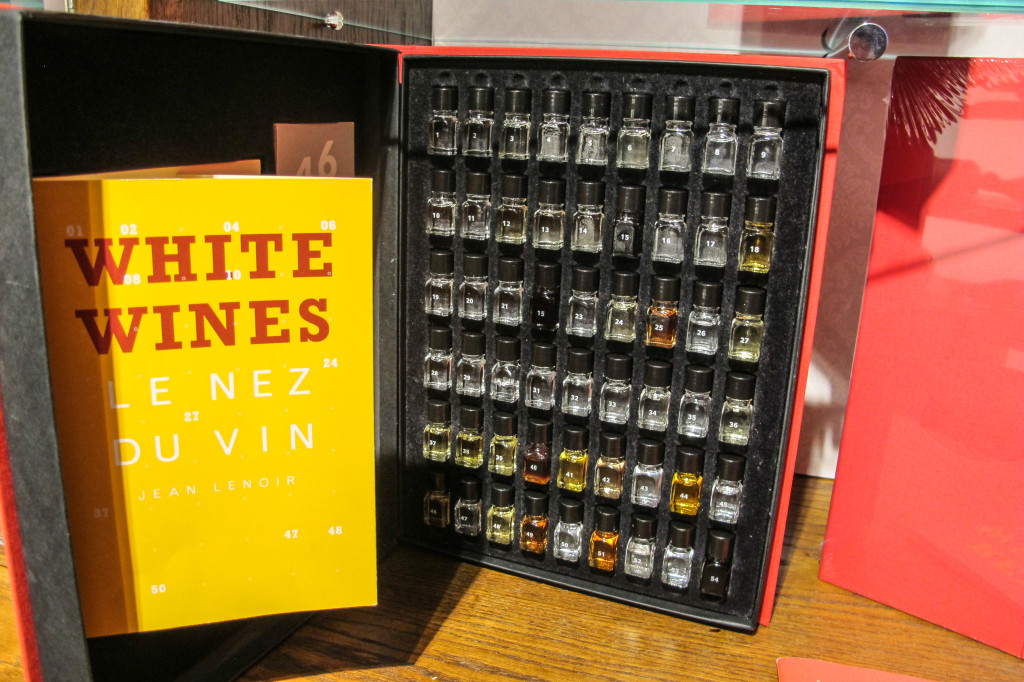 Since it was lunch time we decided it would be a good idea to sit down and do a wine flight and eat some food to re-fuel for the rest of the day. 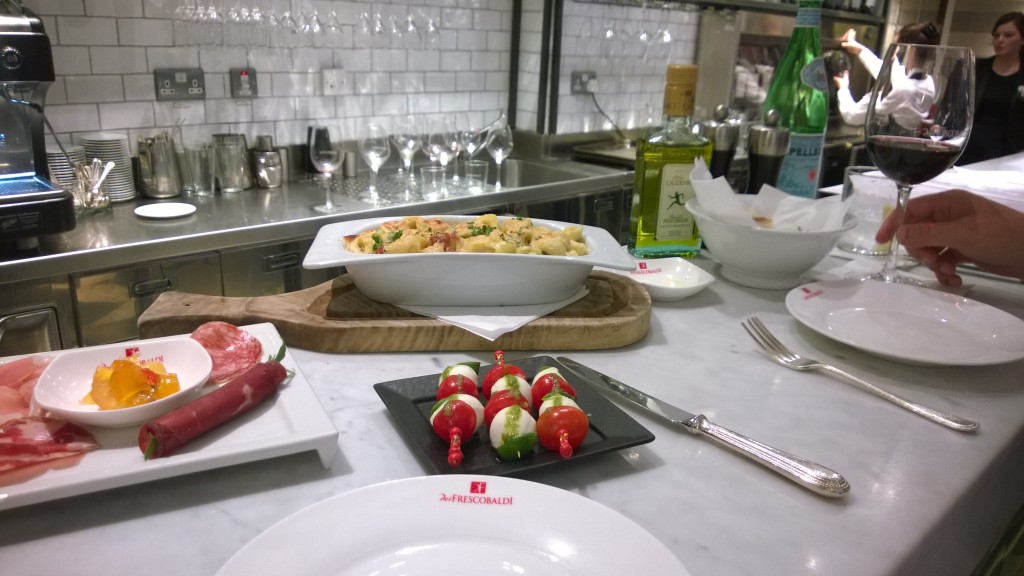 After lunch it was time to head to Westminster Abby and check out Big Ben and the Parliament Building before heading over to see the London Eye. 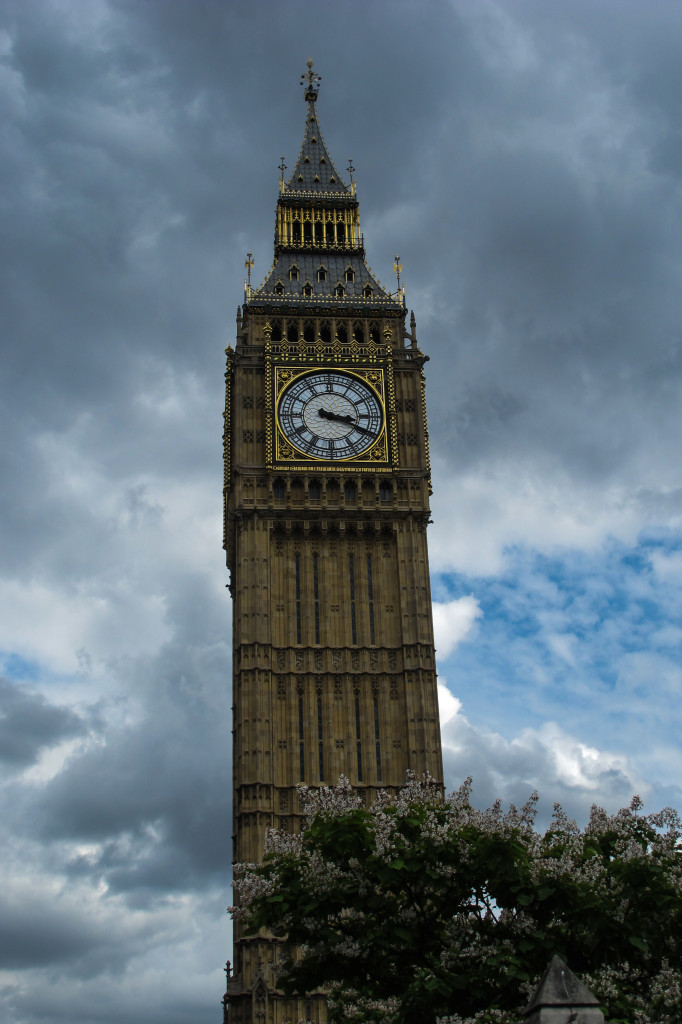 We loved walking through the streets of London. The culture and architecture there is so different than it is in the other cities we visited. It was refreshing to be back in a place where everyone speaks English. While there are a lot of similarities in the building materials, the London architecture felt a bit different than the Italian and Spanish. I guess it’s just English architecture. 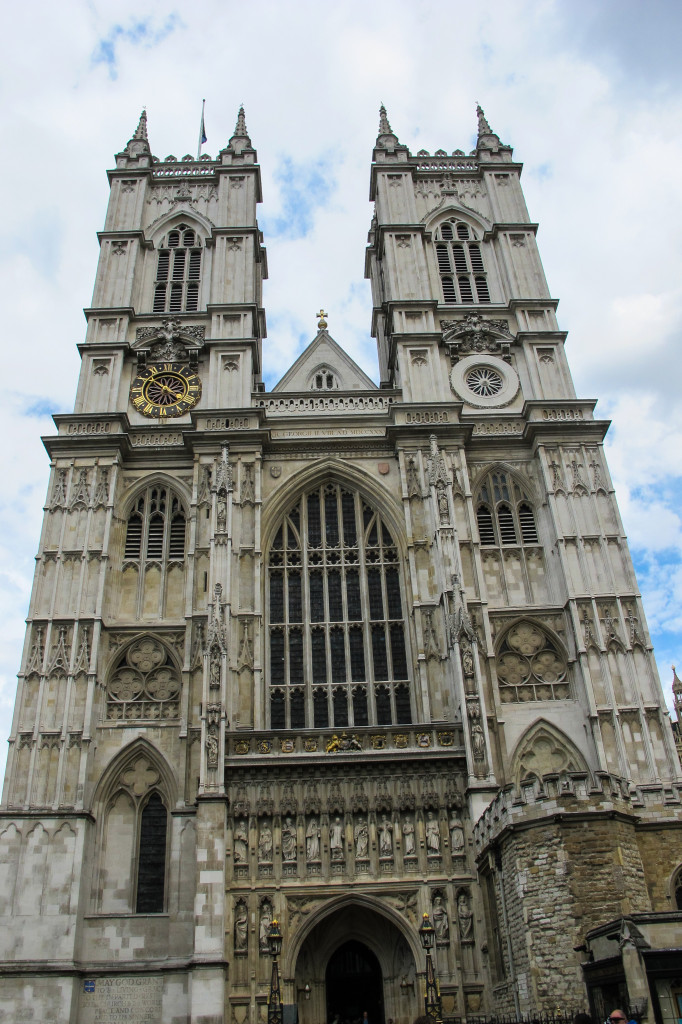 One surprising element of being in London was not knowing which way to look when crossing the street. Thankfully for us Americans they have it painted on the road.

Day two in London was another busy one. When we woke up the sun was shining and it was forecast to be a beautiful day. Our first stop was St. Paul’s Cathedral. 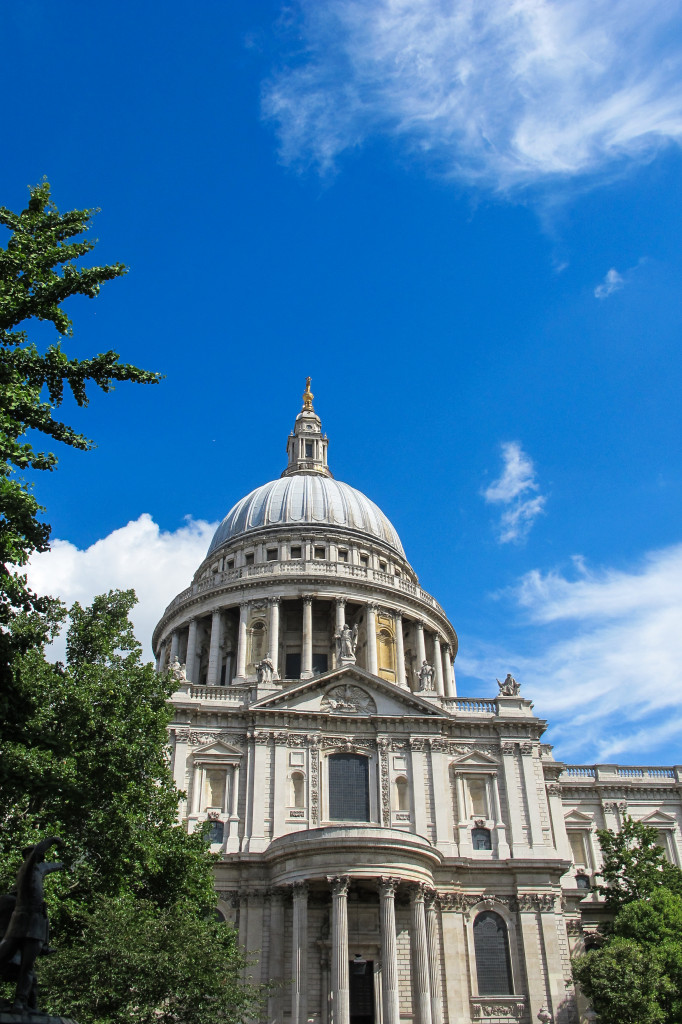 From there we walked across the Millennium Bridge to the Borough Market.

It was a bit early for us but we had planned on having lunch at the Borough Market. 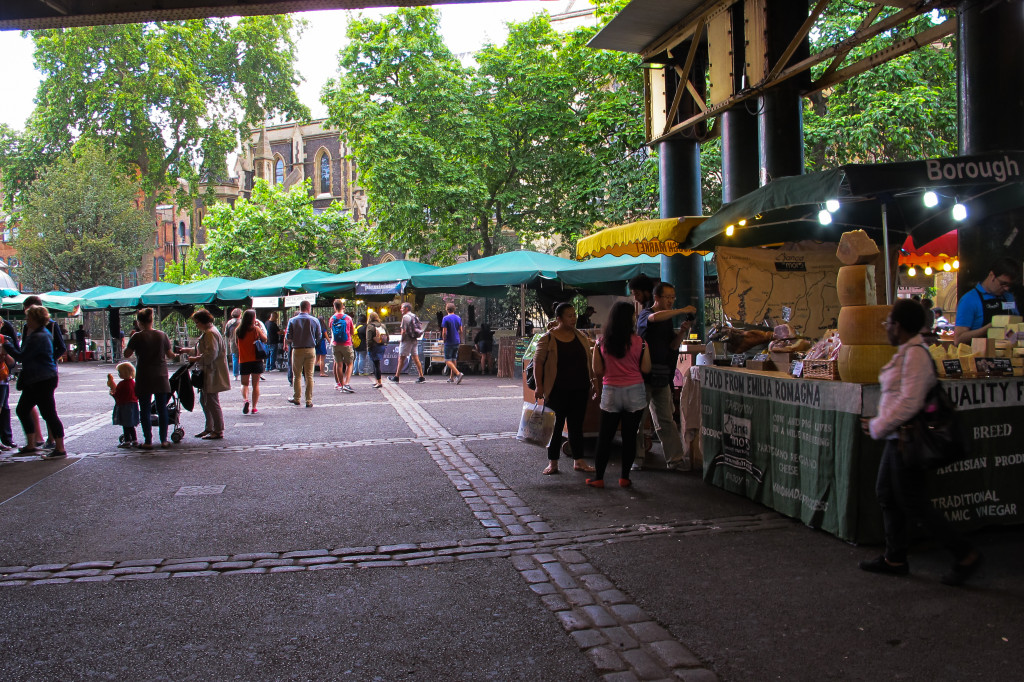 While on our way to cross the Tower Bridge we came upon some different street vendors selling churros with hot chocolate, the one food in Spain that was on our list that we never had. Of course we stopped to get a dessert of churros con chocolate. 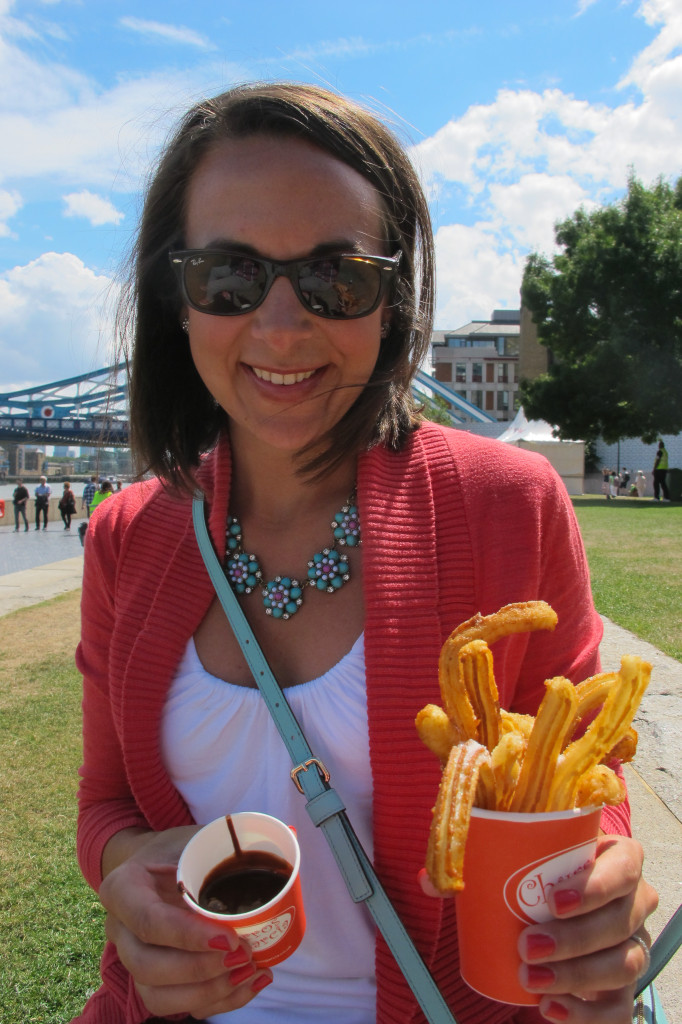 Crossing the Tower Bridge was great, but it was more fun to look at it from a distance. It is quite a magnificent bridge. 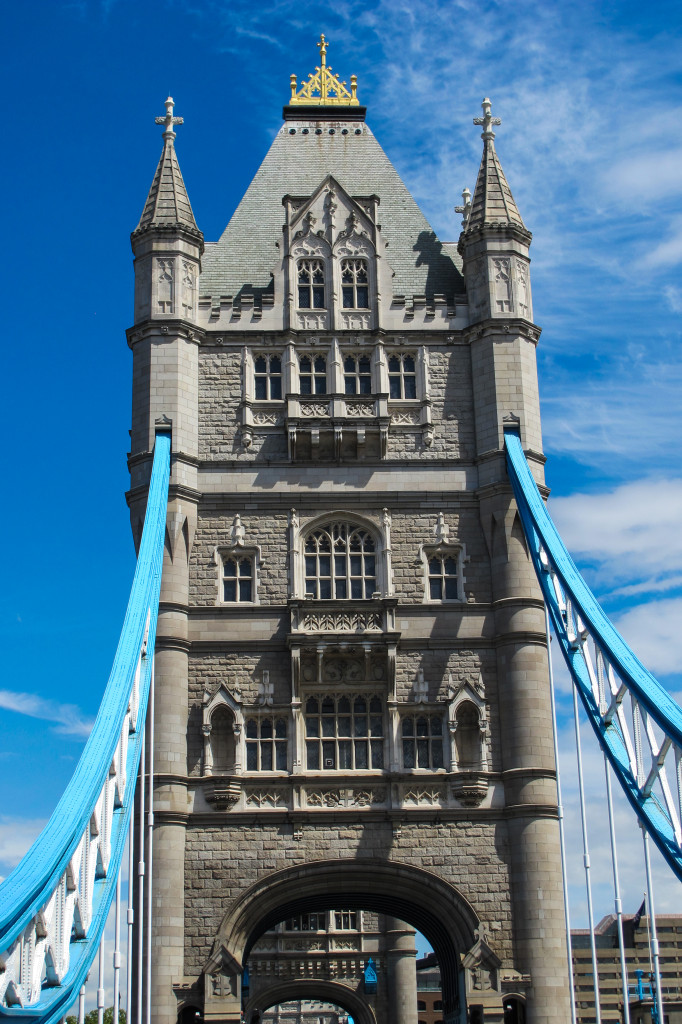 Just on the other side of the bridge is the Tower Museum. This is apparently London’s most visited {read: crowded!} attraction. Neither of us knew much about the museum but Alex decided we should probably see it. I don’t think I would go out of my way to go to a museum. I just don’t have the attention span for museums or the patience for the people who come with the territory. Yes I realize how uncultured this makes me sound… just being honest! 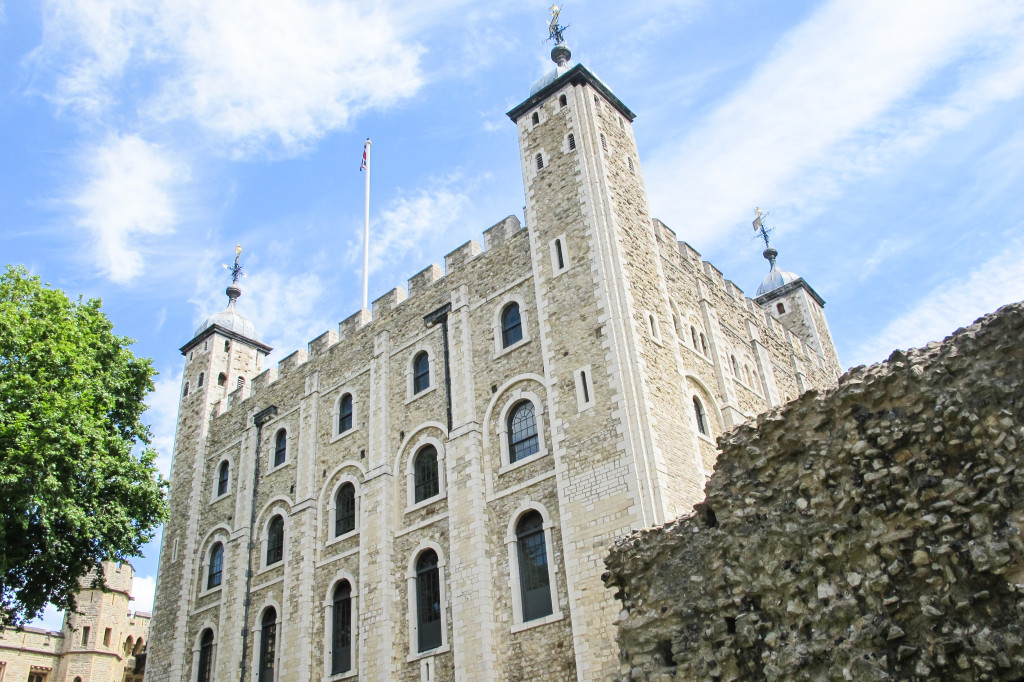 The Tower Museum is basically an old fortress {I want to say built in the 1100s} that has been repurposed into holding the secrets to London’s history over the years, including stories about the famous royalties and warriors, the crowned jewels, the ancient coats of armor that protected the soldiers, and a lot of history. 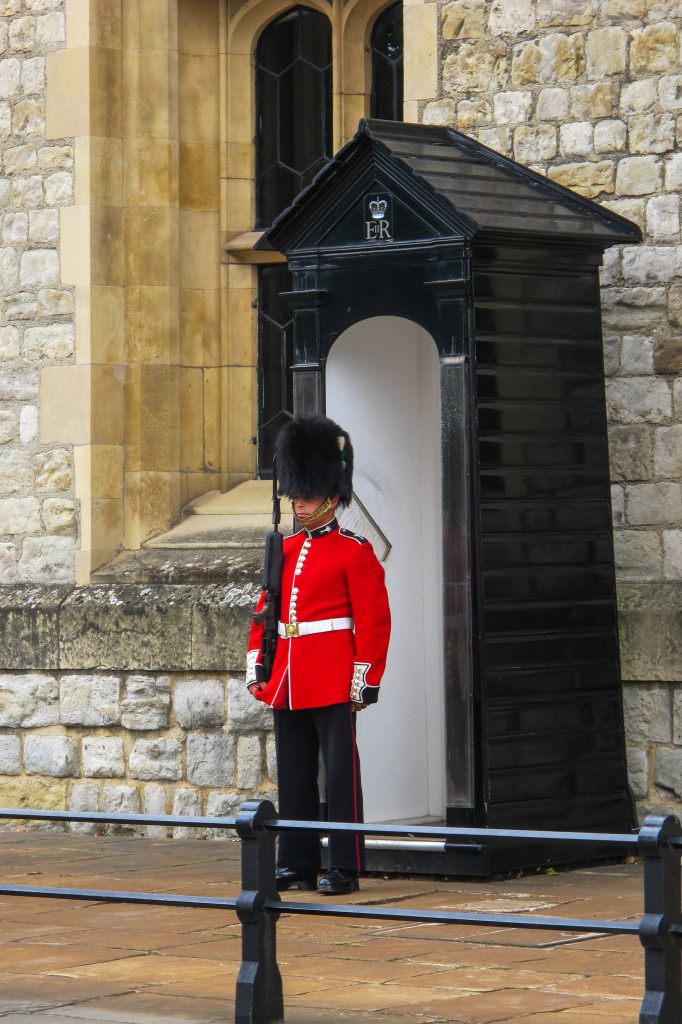 I was perfectly beat after walking through the tourist-filled museum so we found a little café at Katherine’s Dock to recoup at before we posted up to watch the Tour de France pass through. 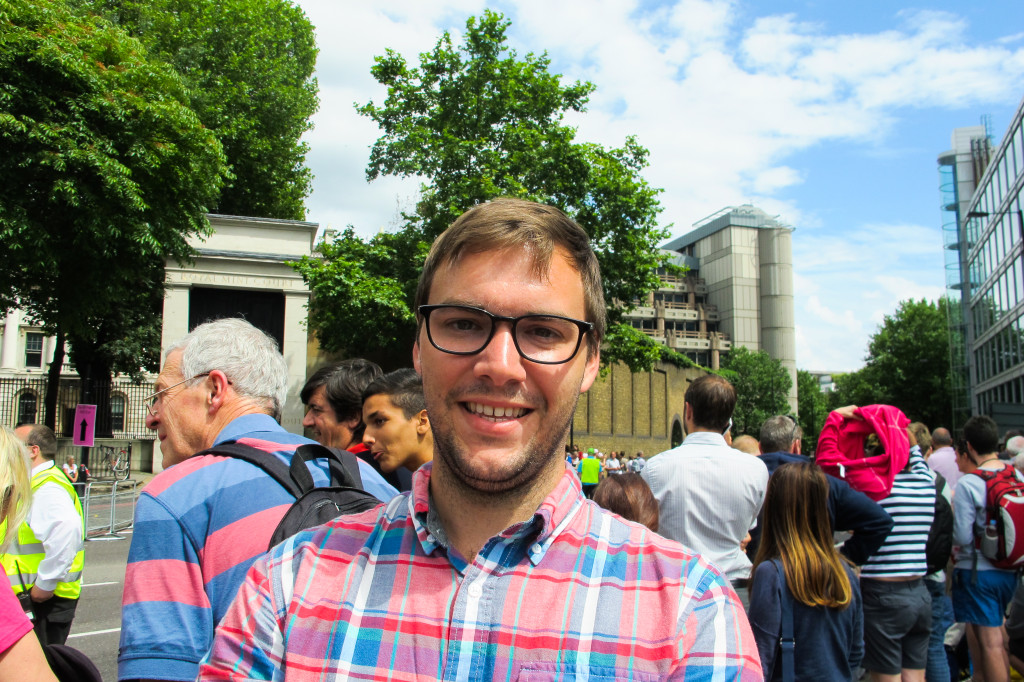 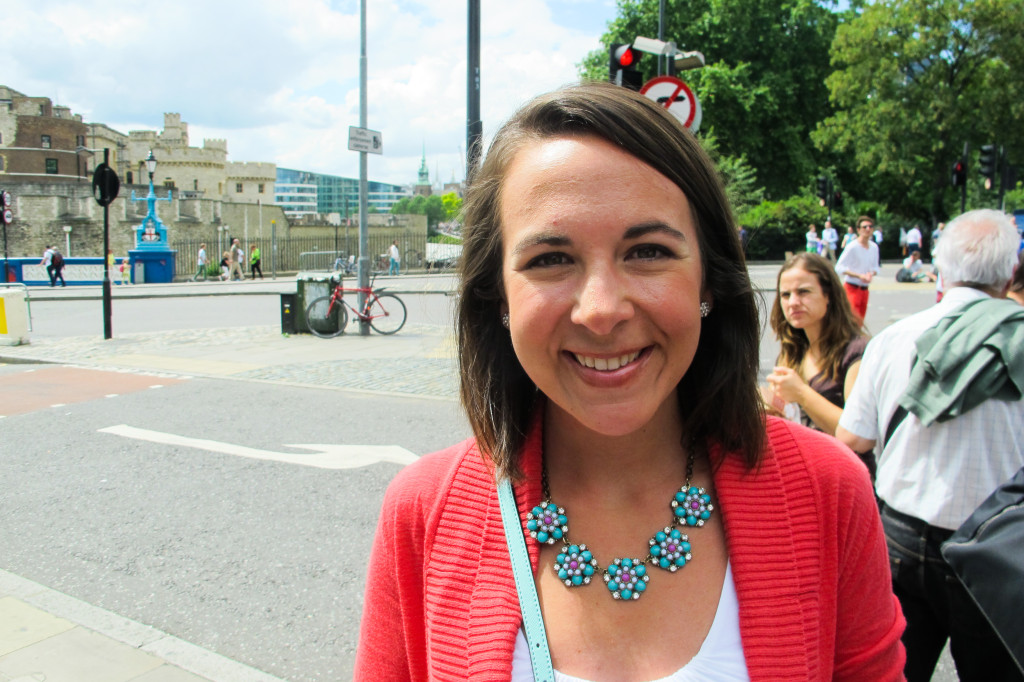 About 20 minutes before the Tour came through the sky opened up and it started pouring. We all stayed put, completely soaked, and remained until the cyclists came through.

We couldn’t believe how quickly they passed by. Literally 200 bikers flew by in a matter of about 30 seconds. And then it was over. 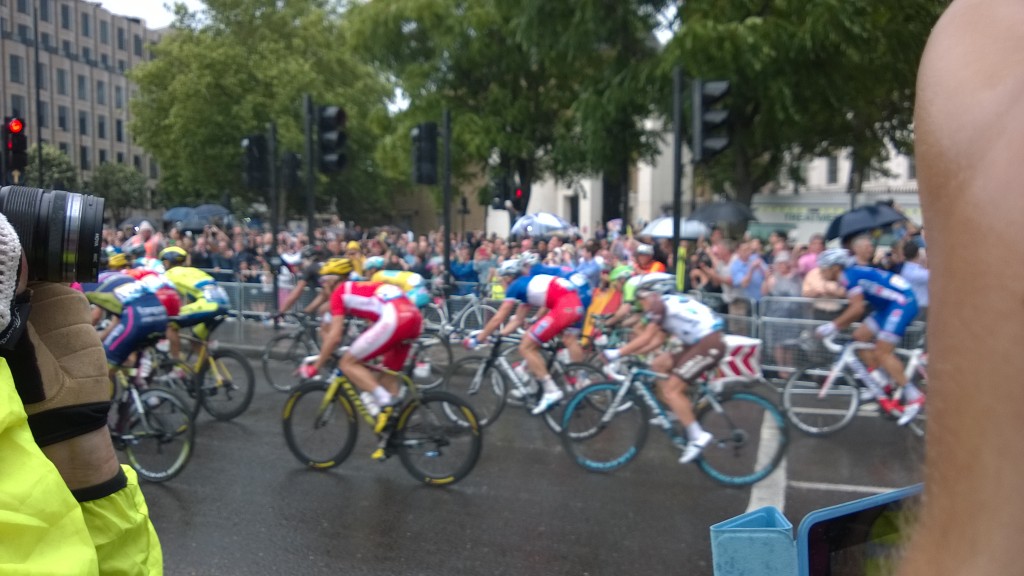 While it was a brief encounter it was definitely a highlight of the trip to get the opportunity to be able to see a small part of the Tour de France. 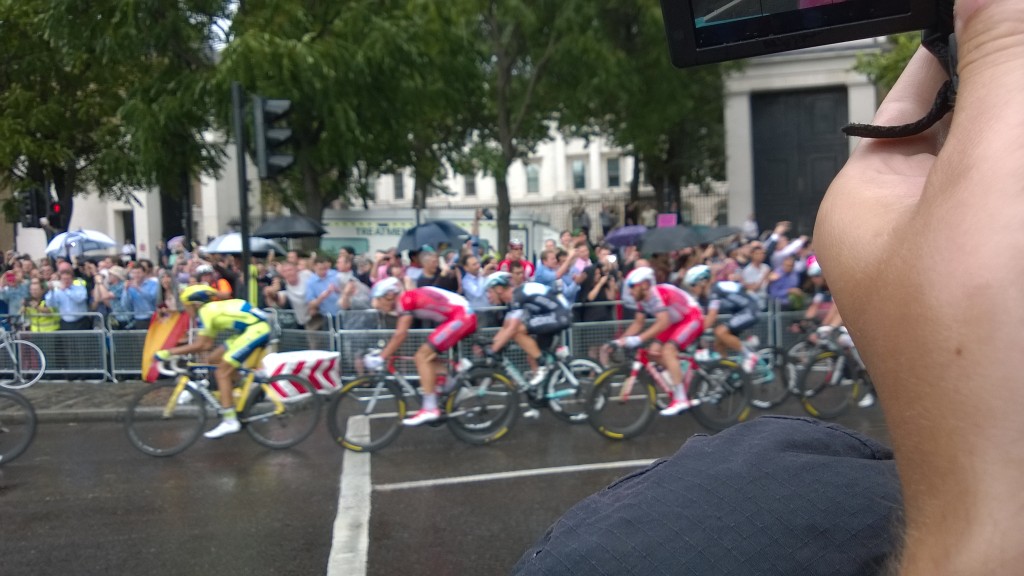 For our last dinner in London we went to a small but fabulous Indian restaurant called Gopal’s. Alex loves Indian food and since London is known for their authentic Indian cuisine we couldn’t pass it up. I had never really had Indian food before but was happy to try it and even happier to find that I enjoyed it. 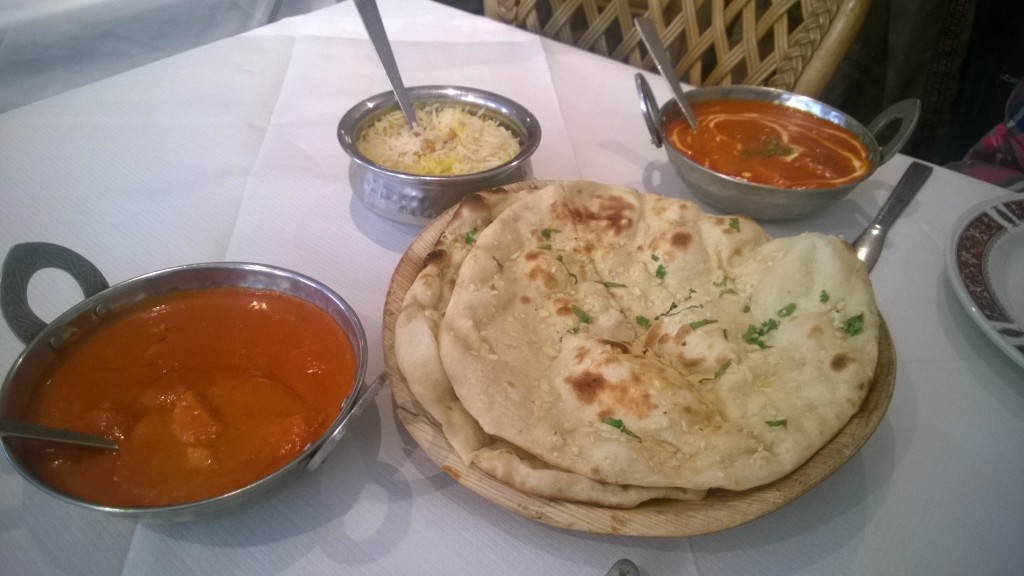 We shared some garlic naan, butter chicken and a chicken tikka something or other {not chicken tikka masala}. Everything was wonderful! 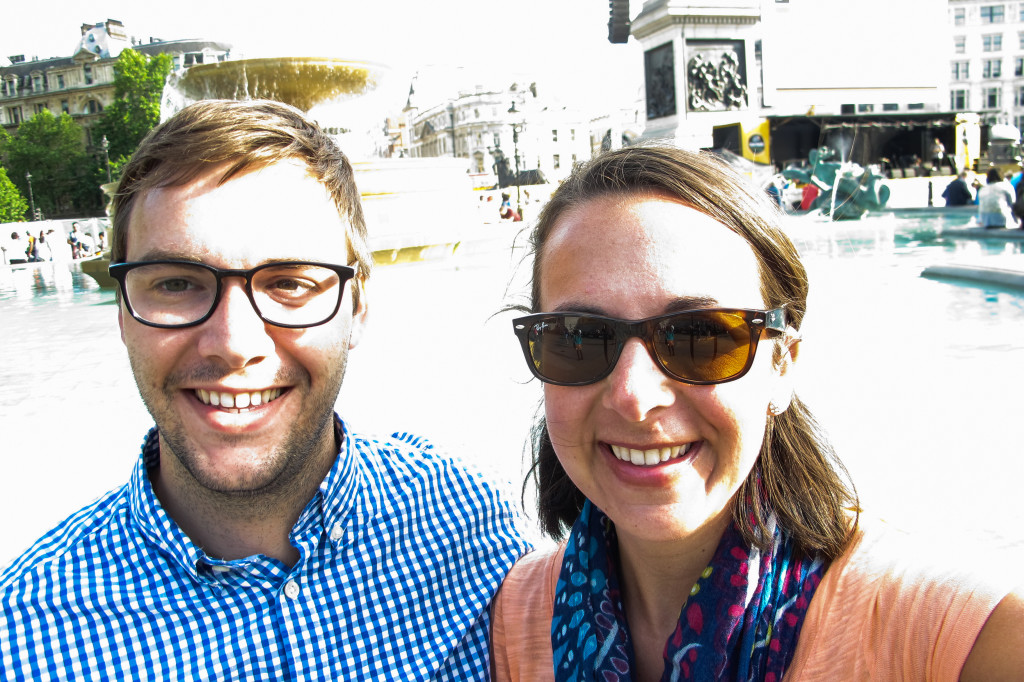 Our evening of Indian food was a great way to cap off our whirlwind trip to London. The next day we were on to our last European city before heading back to the US.