The toddler years are in full force over here — our little Benjamin Ames is THREE! He sure is acting like a bigger kid these days – he is becoming so independent, opinionated and chatty. Ben is so much fun to be around and dang, he is the sweetest. 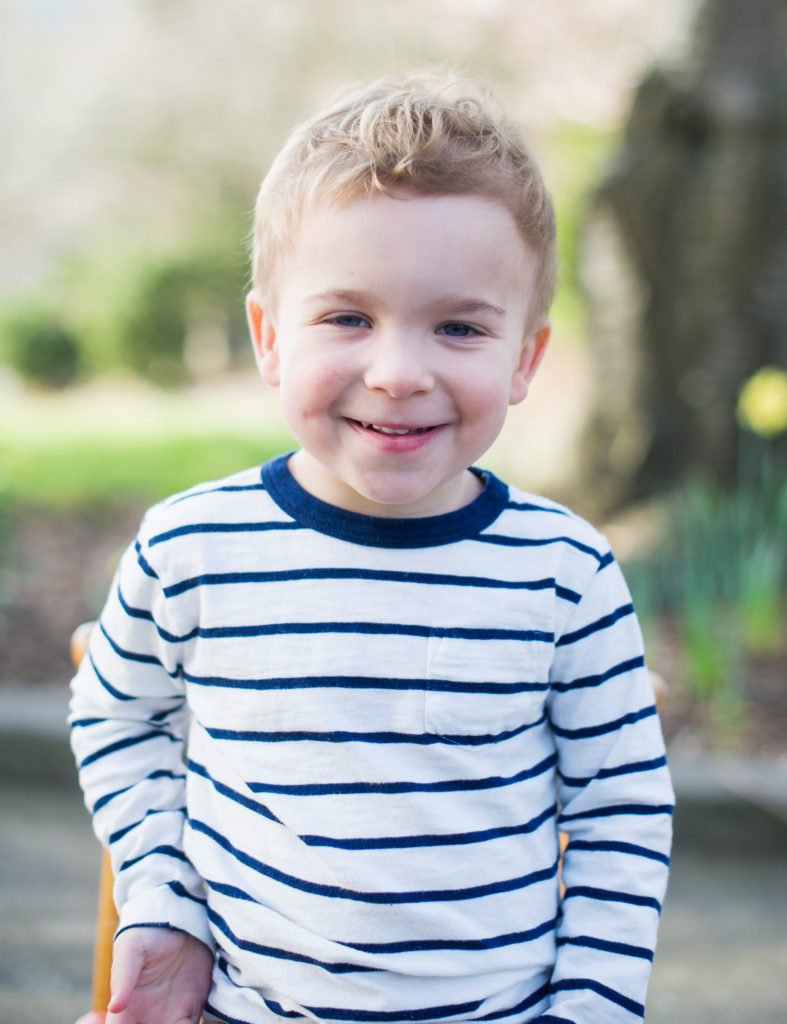 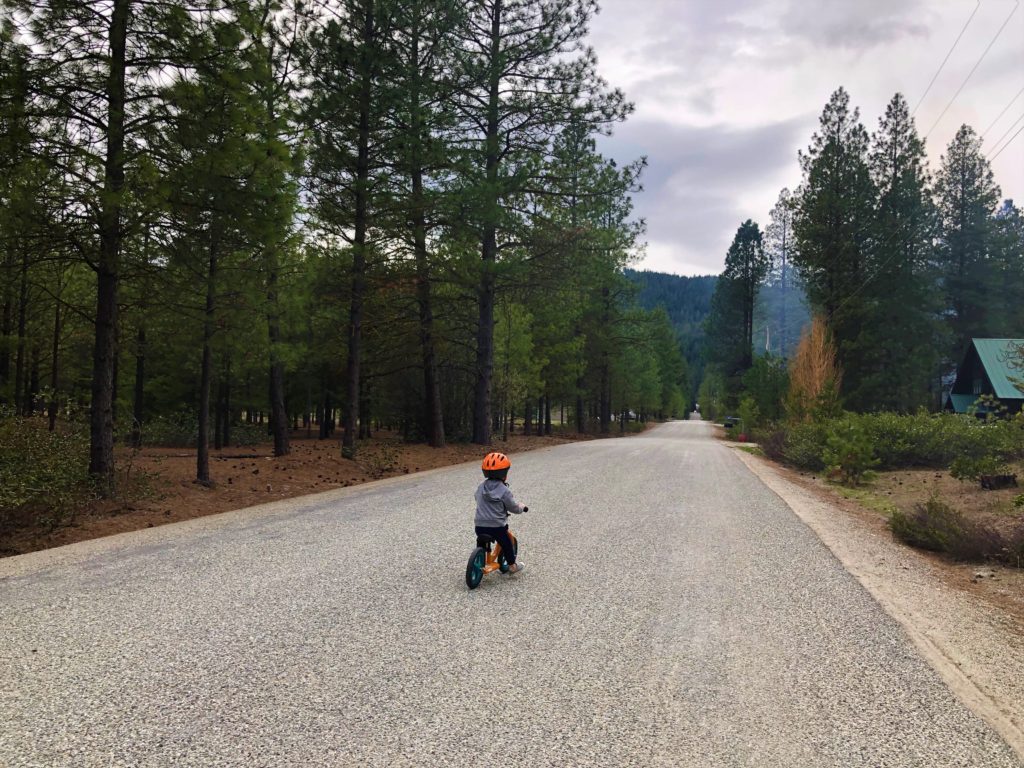 So many of the little nuances we’ve seen along the way in Ben’s personality are really starting to shine. Ben is a blast! He is such a fun kid and I feel like his personality is really infectious. He is just the absolute sweetest boy – I just love his innocence and his confidence – the combination is so endearing. Ben is both extremely goofy and gets a kick out of making people laugh and he’s also really serious. 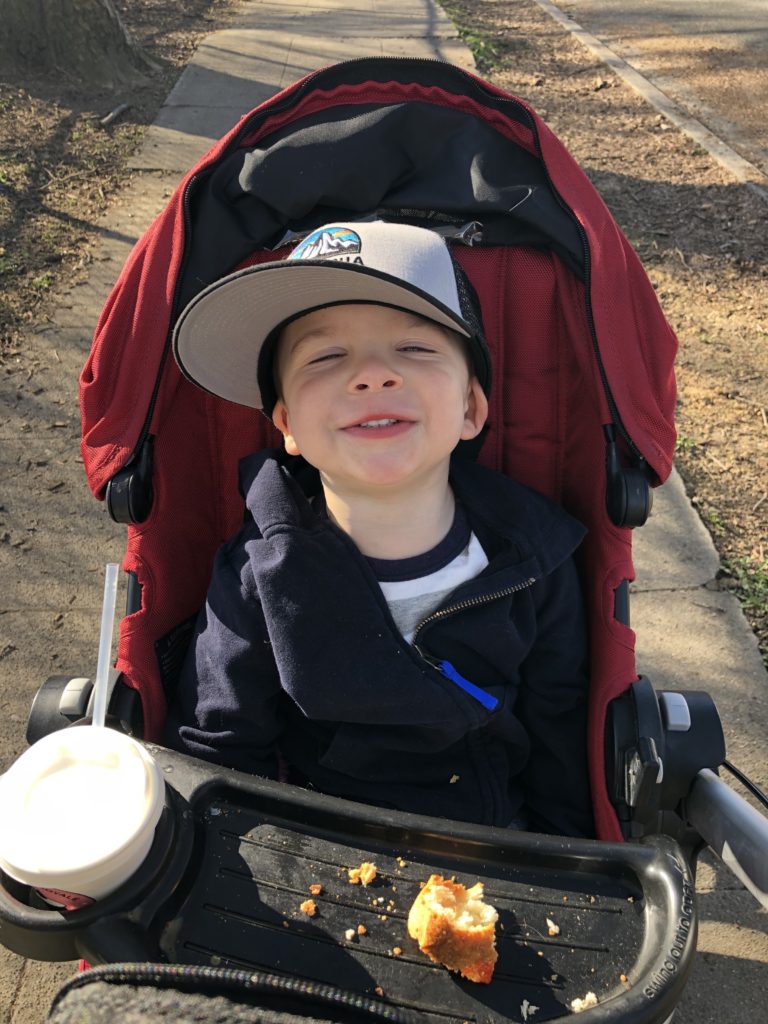 Ben has a lot of leadership qualities and loves to be in charge. He likes to tell us the exact order of how and when we do things or where to put things – fair warning: don’t put something in the wrong spot or you’ll have to answer to Mr. Ben! 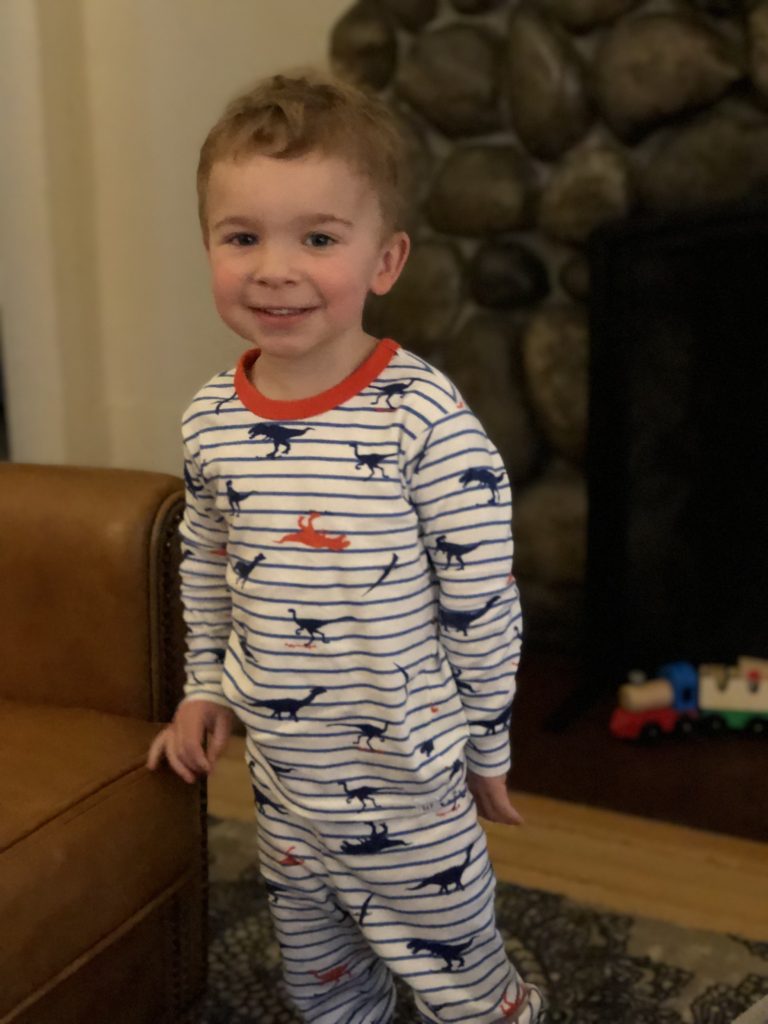 As a three year old, Ben is still extremely active, as he has been his entire life. He is very, very physical and needs big body movements every day. He loves to run, ride his bike and climb on things. While he’s super active he is very capable and happy playing quietly pushing his cars and trucks around the house, reading books and coloring. Following directions; however, is not currently one of Ben’s strong suits. I find he has very selective hearing these days. 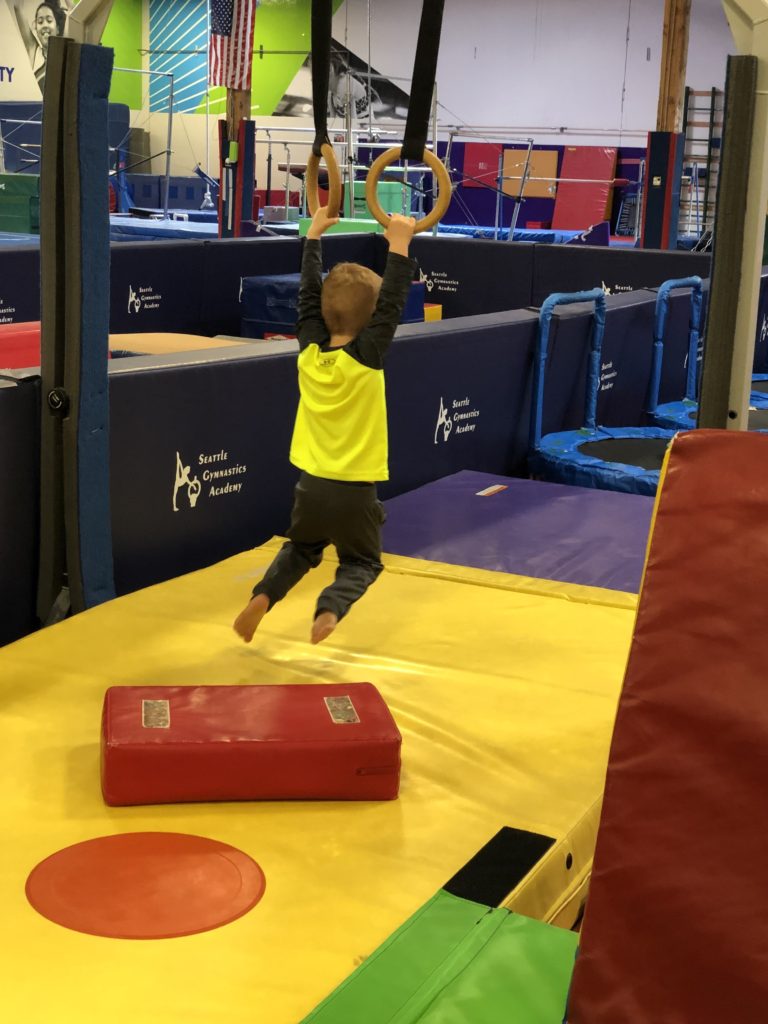 One of my favorite things about Ben is how athletic he is. His confidence has been beaming lately because he has been so successful in new physical activities. Now that he’s a little older I love watching him climb at the park, challenge his body at gymnastics and fly around the sidewalk on his bike. He got a scooter for his birthday and that has been a source of tremendous pride for him and joy for me. Swimming lessons started recently and that, in addition to the scooter, has been so heartwarming to watch. I so enjoy sitting back and watching him learn a new skill. 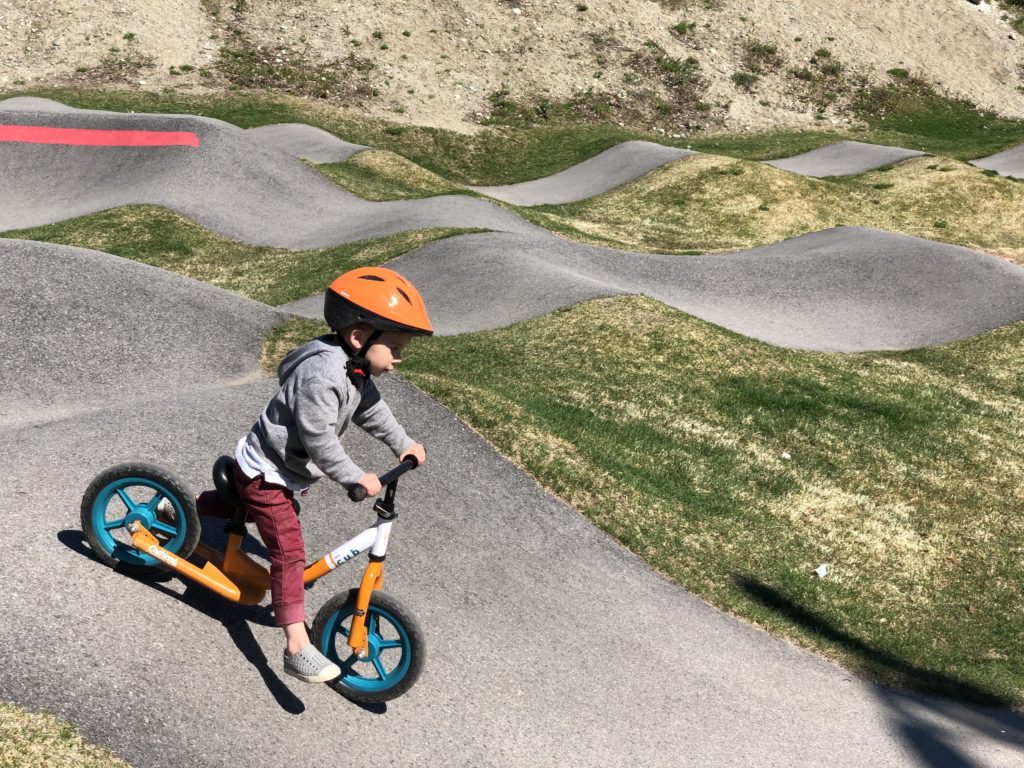 Ben is very friendly and rarely seems shy. He is quick to offer a greeting to an adult we pass by, tell a story to his teacher at the start of the day or go introduce himself to a kid of any age at the park. He is quite the chatty Cathy! Sadly, though, he’s started to notice when adults don’t say “hi” back – so, if you’re reading this, pay attention to the little ones waving at you and don’t crush their spirit by not saying hello – or better yet, just be friendly and say hi to everyone you pass along the way – be like Ben. 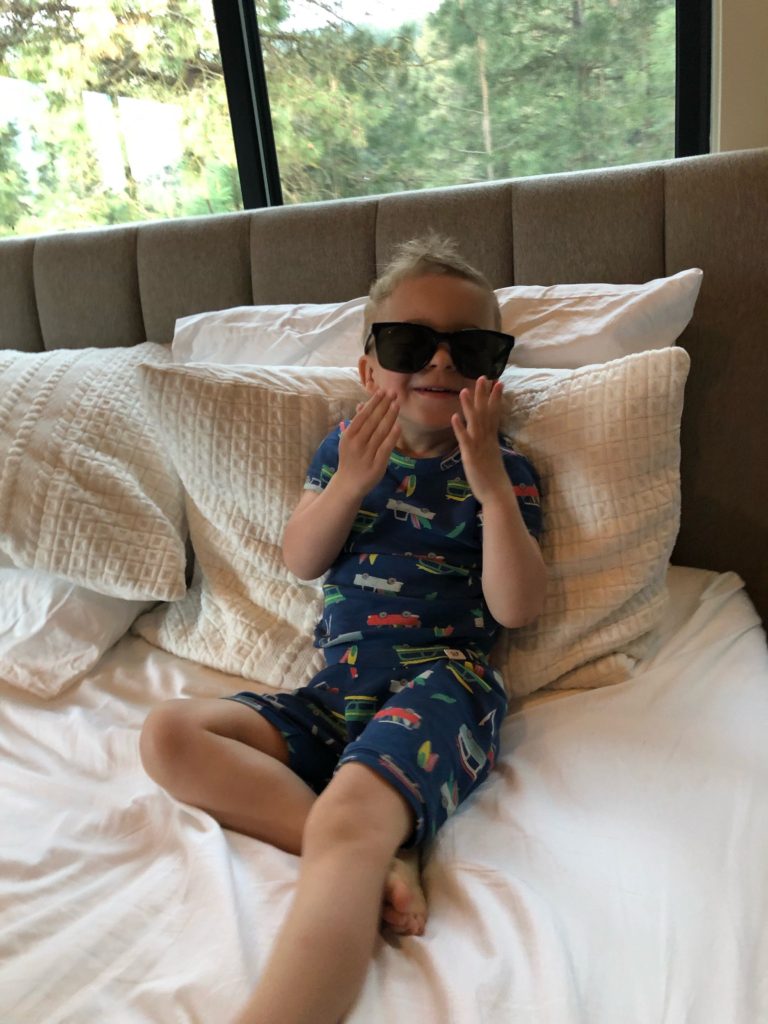 As with most toddlers, Ben’s emotions run strong and can change at the drop of a hat, especially when tired or hungry. We’ve been so impressed with how well Ben does most of the time at regulating his emotions if they’re getting out of control {unless of course he’s hungry or tired}. He loves reading books by himself or pushing his cars around and finds these activities very calming. Thanks to the show Daniel Tiger, he has learned some songs that he can sing when he needs to settle down, or even when he needs to remember how to be patient while waiting. 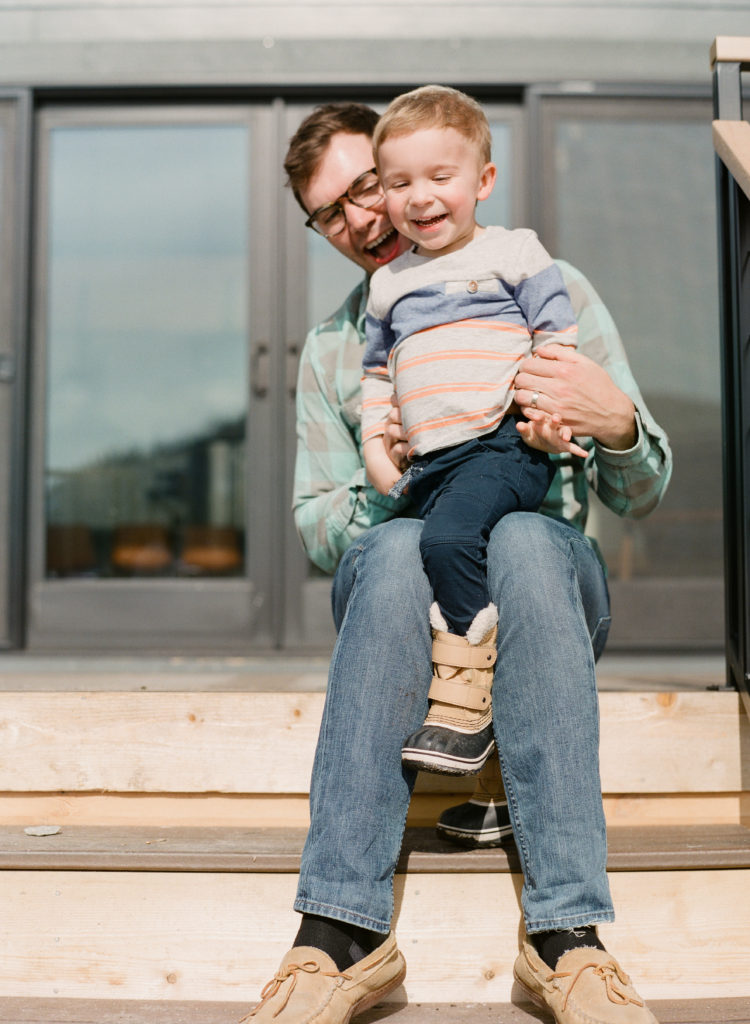 Lately we’ve noticed a big uptick in Ben’s emotional intelligence. He has been labeling his feelings so much recently. It is so, so cool to hear him say “I’m SO FRUSTRATED!” or tell us when he’s feeling a little upset because of something that happened, or nervous about something that’s about to happen. 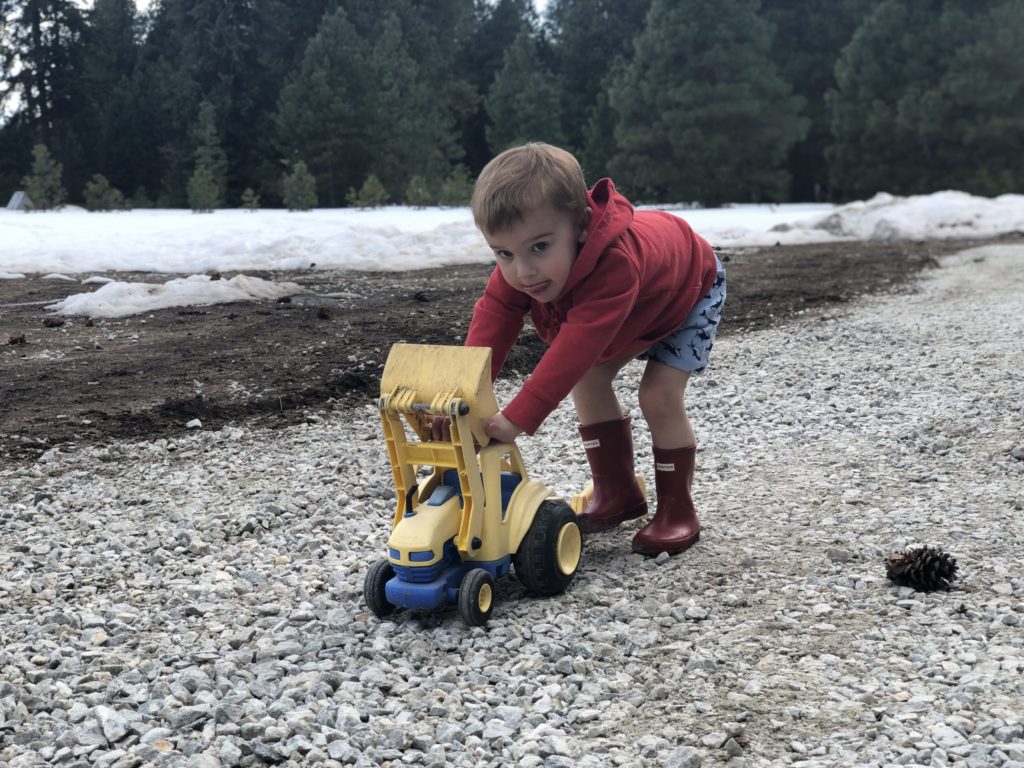 Very recently we noticed a change with his compassion and empathy. Instead of jumping to say “sorry” after an offense, we’ve been coaching Ben to come over, pat the person on the shoulder and ask if they are ok and if there’s anything he can do to help/make them feel better. It actually is so much better than a quick “sorry” {or worse, “sorry, not sorry”} then back to playing and it truly creates a special moment. He’s begun to do this on his own and also in situations he’s not even involved in. 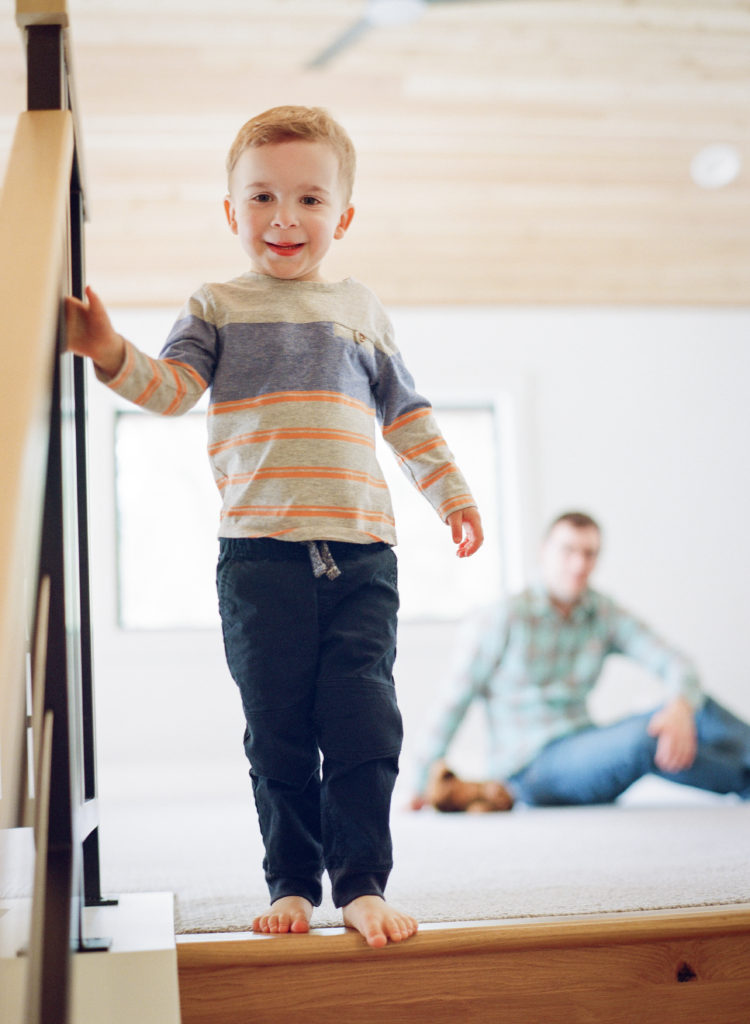 The other day Jackson ate some of Hannah’s food while we were having a picnic and I was trying to model for Ben how I would deal with that. I told Jackson that I was really upset with him for eating Hannah’s pasta and very frustrated that happened. Ben came over and gave me a kiss and asked if he could help. It’s the sweetest darn thing! 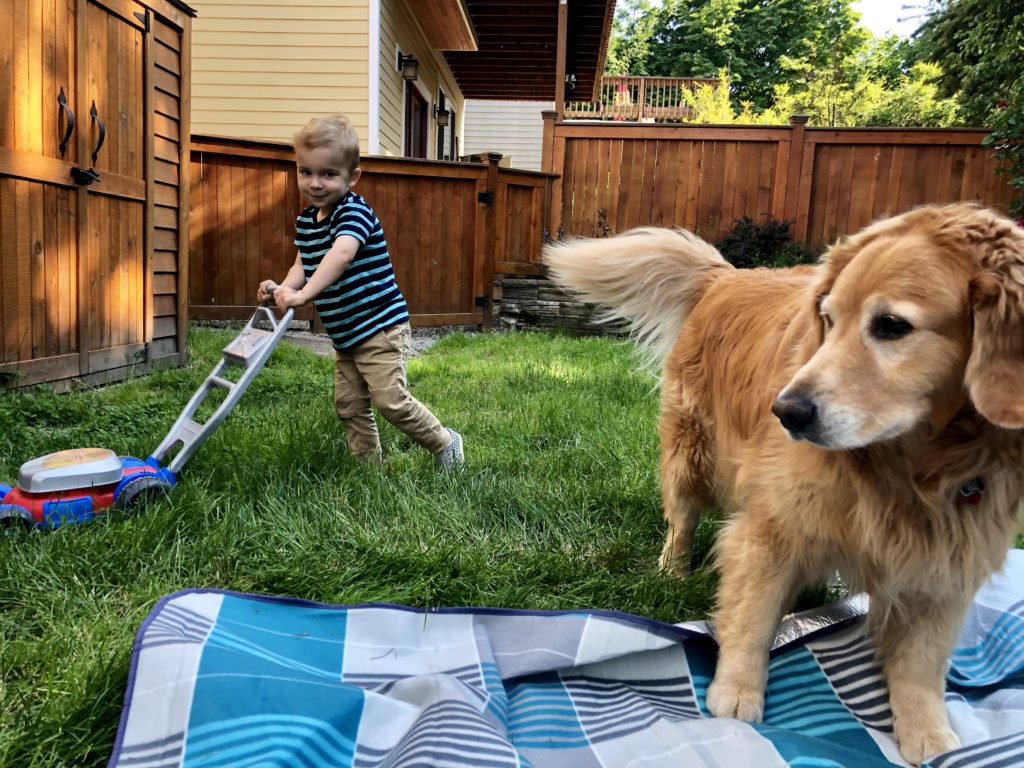 Speaking of Jackson, oh my goodness, Ben and Jackson are becoming such great pals! Ben is SO good with Jackson. He’s learning how to use our commands and hand signals with Jackson and when we’re out at The Lodge he will throw the ball for Jackson. A few weeks ago Jackson ran out the front door in our Seattle house and Ben was the one who got him to come inside, easy peasy. 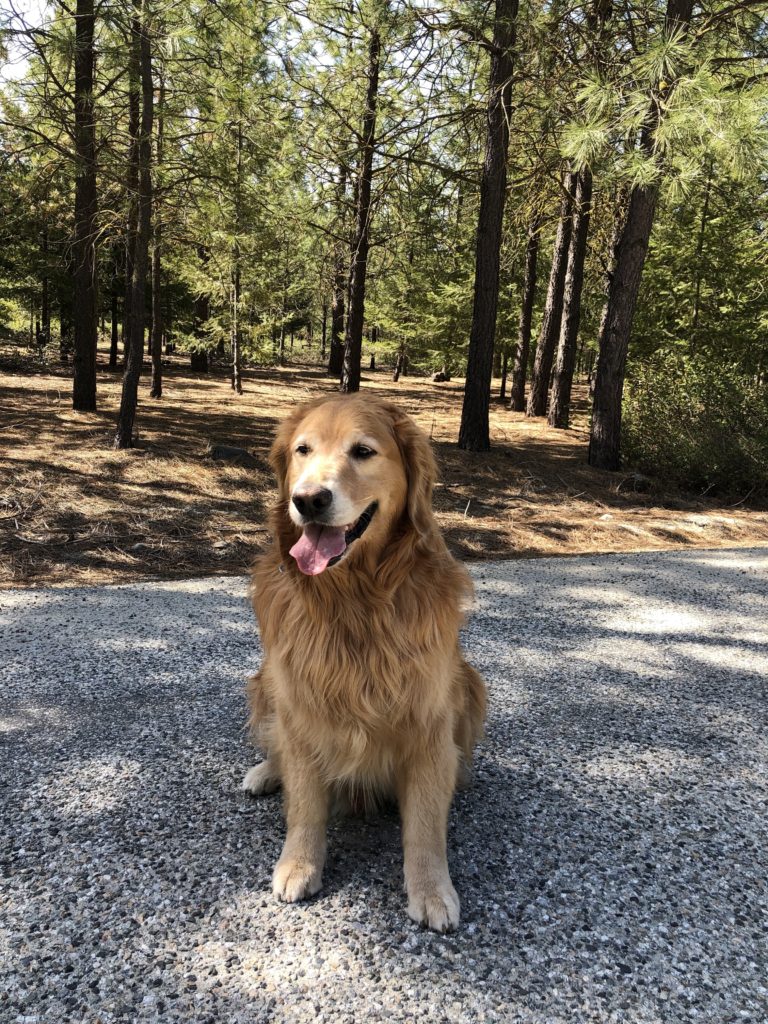 In addition to being a super sweet brother to his dog, Ben is nailing it in the big brother department to his baby sister. He’s starting to figure out how to play independently near her without her trying to grab his toys and he’s also beginning to engage with her in a toy he’s playing with. 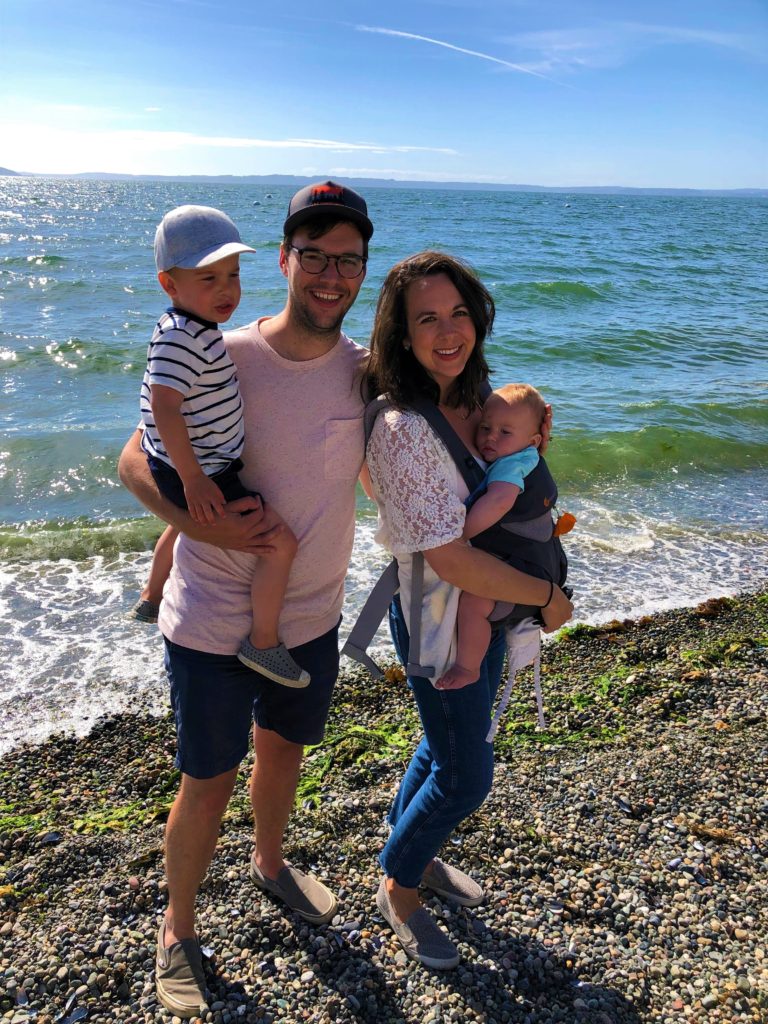 I continue to be amazed that most often he can hold it together and stay patient and calm when Hannah is driving him crazy and trying to steal his toys. The moments when he comes up and tickles her, makes her laugh or helps her absolutely melt my heart. I’m so excited about the sibling dynamic and I coach him a lot about how to help Hannah and teach her how to do things and how to talk to her or give her a different toy to play with when she wants to play with what he has. Sometimes I’ll catch him say “Hannah, you’re still learning! I know it’s frustrating!” and gosh that makes me feel like I’m doing something right! 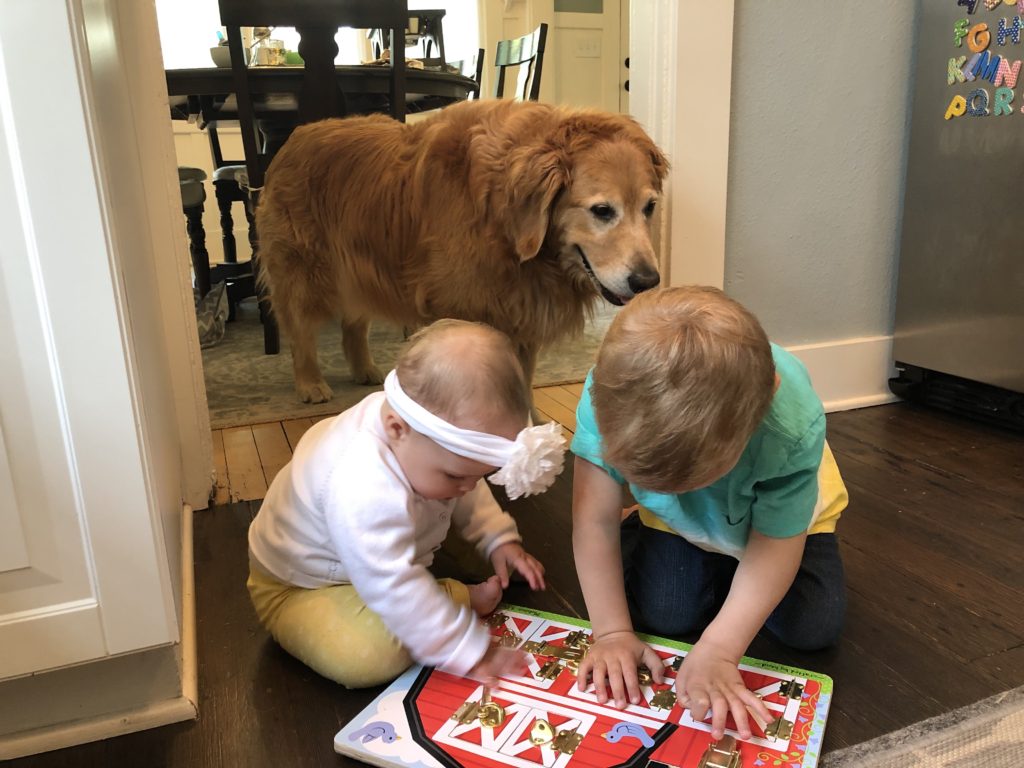 One of Ben’s biggest recent accomplishments is that he has become potty trained! It was a long road getting to that point and we are so proud of him for figuring it out. We spent 8 months trying to rely on intrinsic motivators with limited success and honestly within the first few days of using gummy bears as a motivator he nailed it. We haven’t started tackling overnight potty training but recently Ben has started to protest wearing a diaper at night so I think we’re probably close… 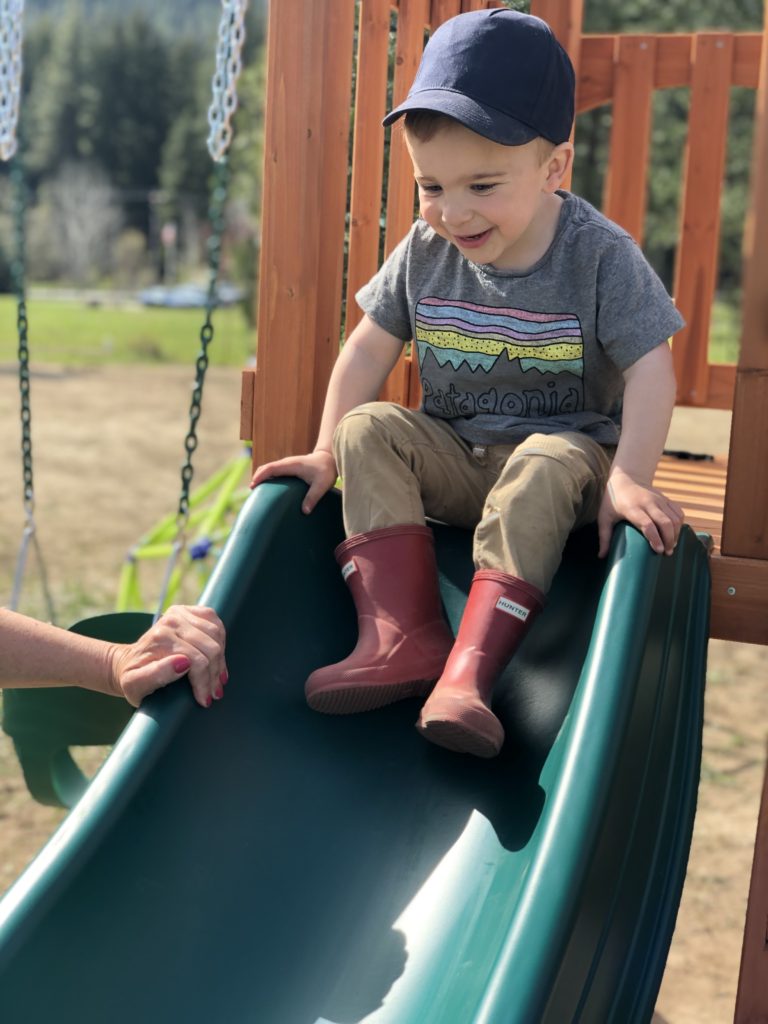 The other day I asked Ben if he could help me and he stared blankly at me and said “No, I can’t. I’m too busy standing here.” There are days when I swear he’s training to be a stand-up comedian with a dry sense of humor – he keeps me on my toes with the things that come out of his mouth. He’s really starting to understand one-liners and more mature responses. “Yeah right, I don’t think so!” 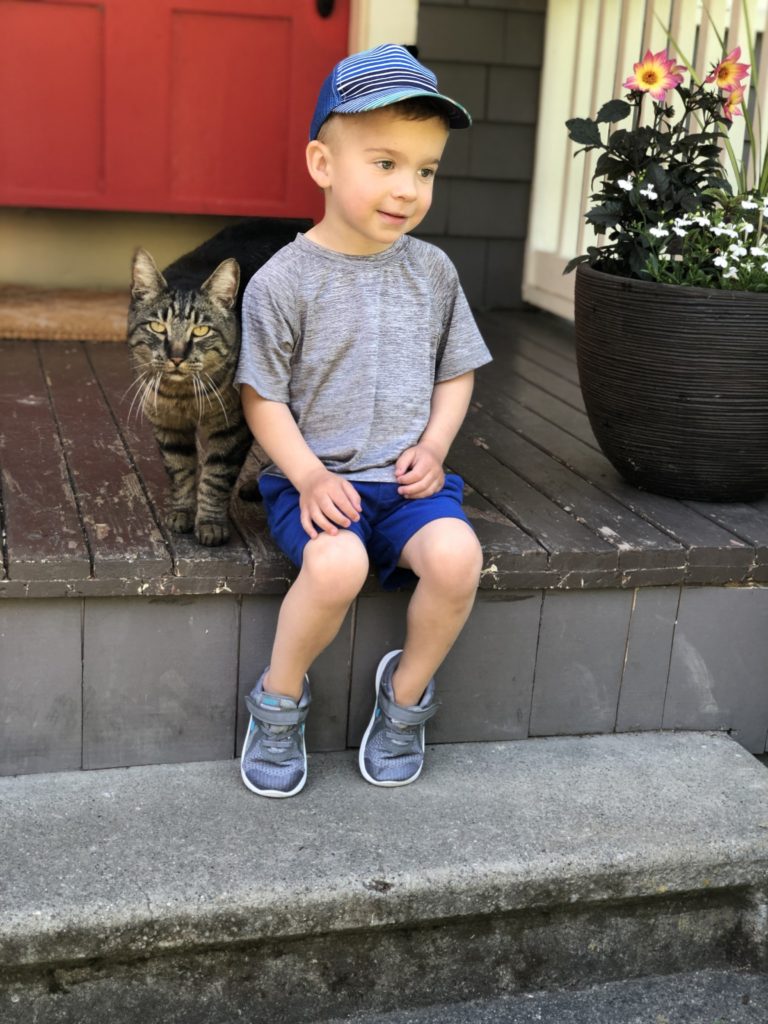 Ben is becoming so independent. Sometimes it’s hard to remember to let him do things on his own since I’m so accustomed to doing them for him or for Hannah. Recently Ben has started to say “please don’t” when we’re providing help unnecessarily. Just the other day he unwrapped a little Babybel package of cheese completely on his own from start to finish, and the day before that he grabbed a little cup and filled it up with water from a big Gatorade water jug at a mountain resort after a hike. These little reminders keep me in check with how big he’s becoming.

Somewhere around 2 1/2 we noticed how dang observant Ben is – holy cow, the things he notices are shocking sometimes. While on a walk he noticed a Tesla and asked how you open the doors because the handles were different. Ben is very detail-oriented and he appreciates things in order, always knows where things belong and, not surprisingly, appreciates some predictability and routine. 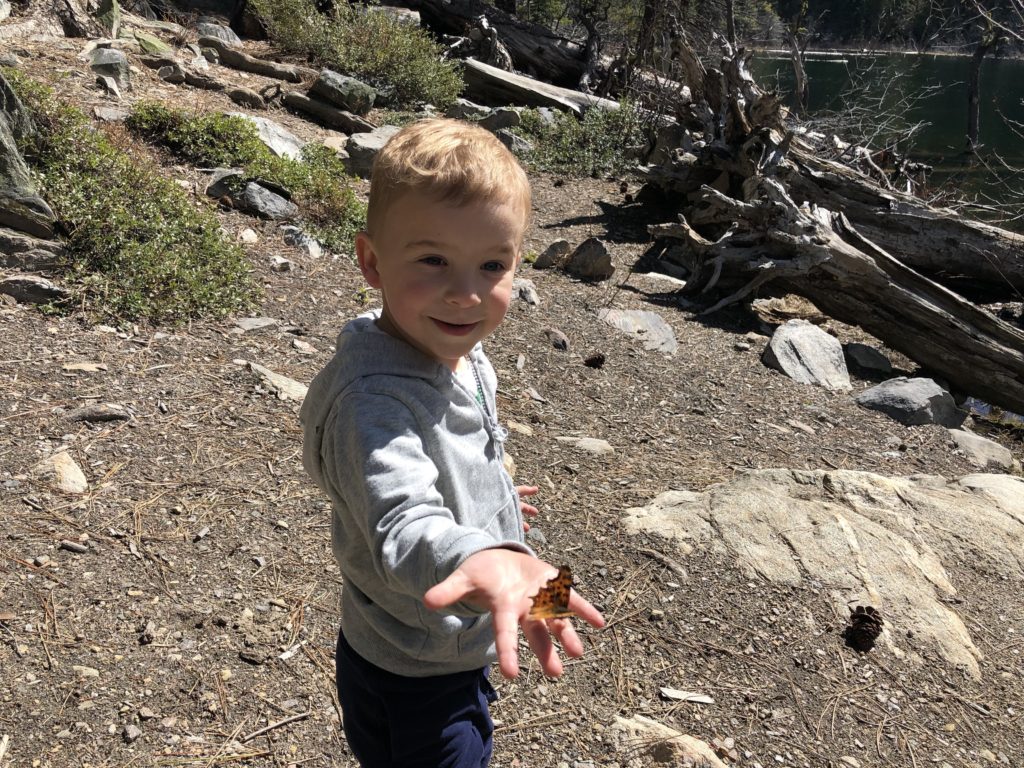 We have absolutely entered the “why?” phase and I LOVE it. Sometimes I’m at a loss for words as to how to explain why something is the way it is and it makes me really have to think. It is so much fun seeing how curious he is and hearing him engage in something enough to ask questions. Sometimes Ben will ask me to “say that again” I think because he is cataloging it in his little brain. His memory also blows me away – some of the experiences or minute details he can recall are so surprising for someone so little.

Ben is about to finish out his first year of preschool {he already finished co-op}. It’s been a big deal having him comfortable being dropped off at school without us, after having spent nearly his first two and a half years at home during the day. Ben loved his two schools and has made some really nice friends and become a part of two sweet communities. It brings me so much joy hearing him talk about his friends from school. 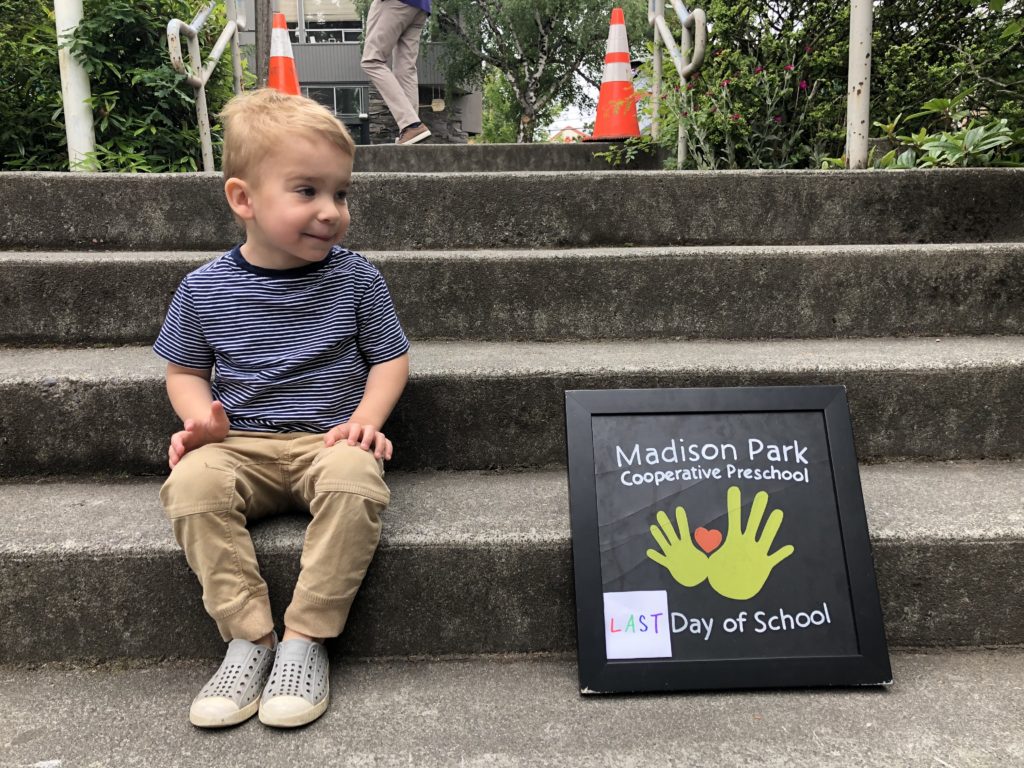 From preschool to gymnastics to swimming lessons to riding his balance bike, Ben has been working really hard at becoming a big, independent kid. He’s had such a confidence boost recently and seems to be starting to figure out who he is. 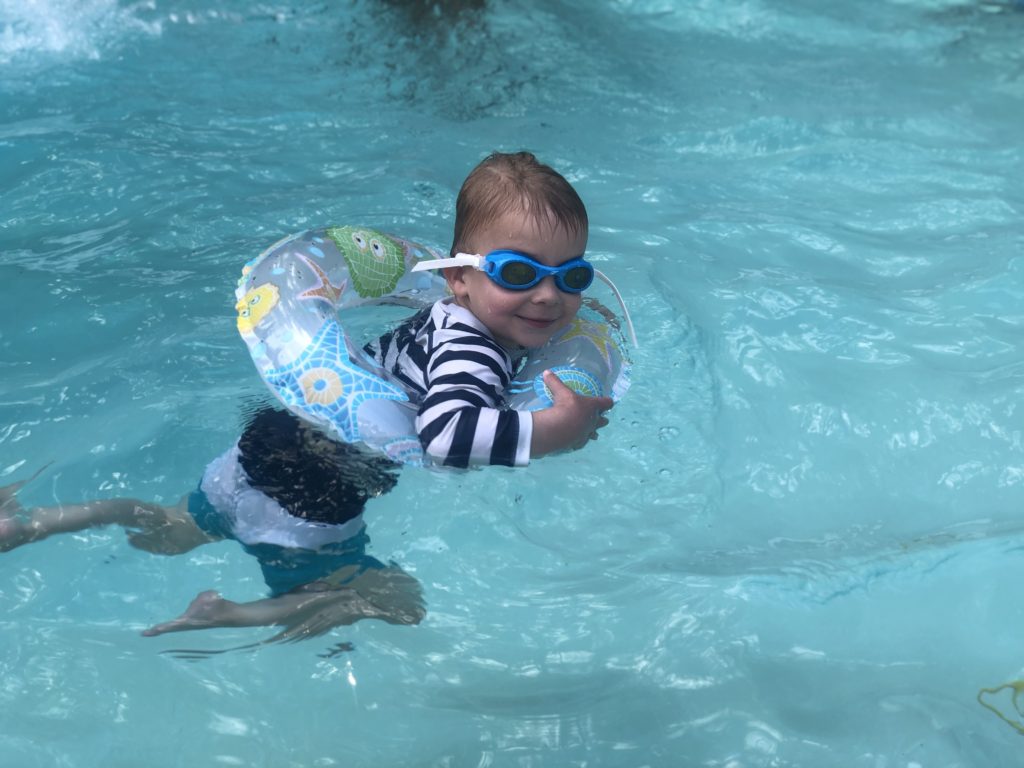 It’s been so heartwarming to see the transformation from playing alongside other kids to playing with them. This really has started happening over the last three months or so. Occasionally at the park he’ll go up to some other kids and they’ll play together – he’s usually comfortable going up, unprompted, and introducing himself to them. He seems to prefer to play by himself most days at the park. He loves push around the dump trucks or ride his bike. He loves the days when I coordinate with his friend Olive’s mama and Olive can come ride her scooter with Ben. 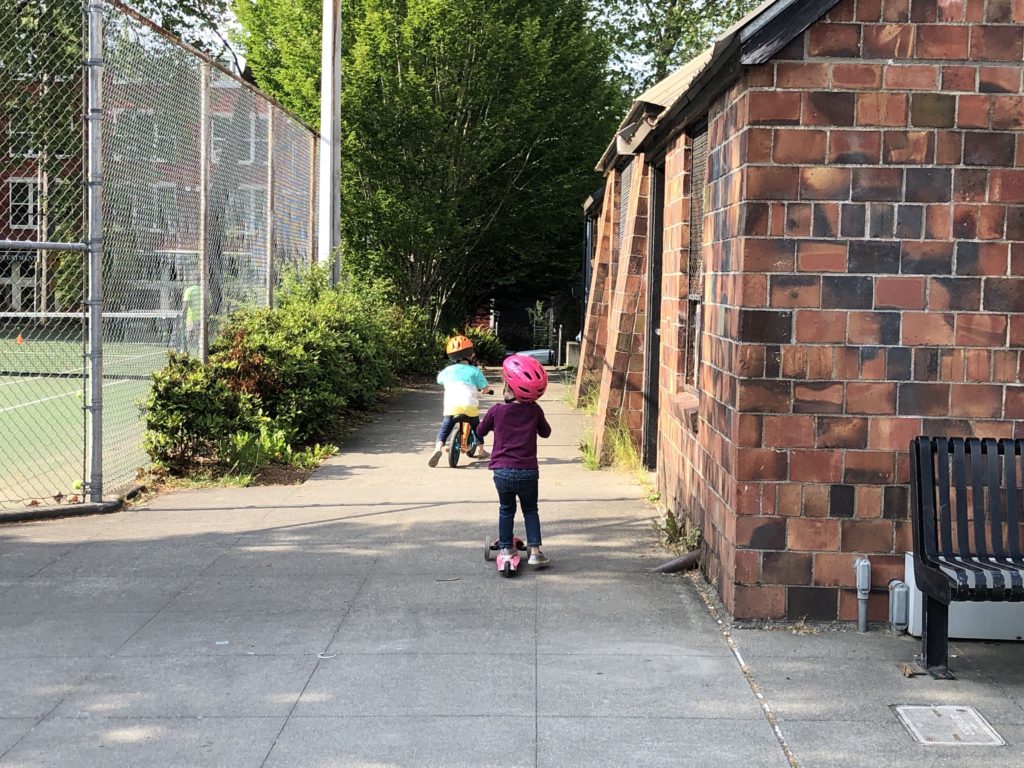 Ben loves his new big boy room – he even calls it “my big boy room.” The transition to his new room and bed has {so far} been much easier than I expected. I think that’s also been a big confidence boost for him to have that space that is *just* his. He also had the opportunity to weigh in on the room – he helped pick some of the decor and the furniture and it seems like he appreciated that we went with a car theme for his bedroom. 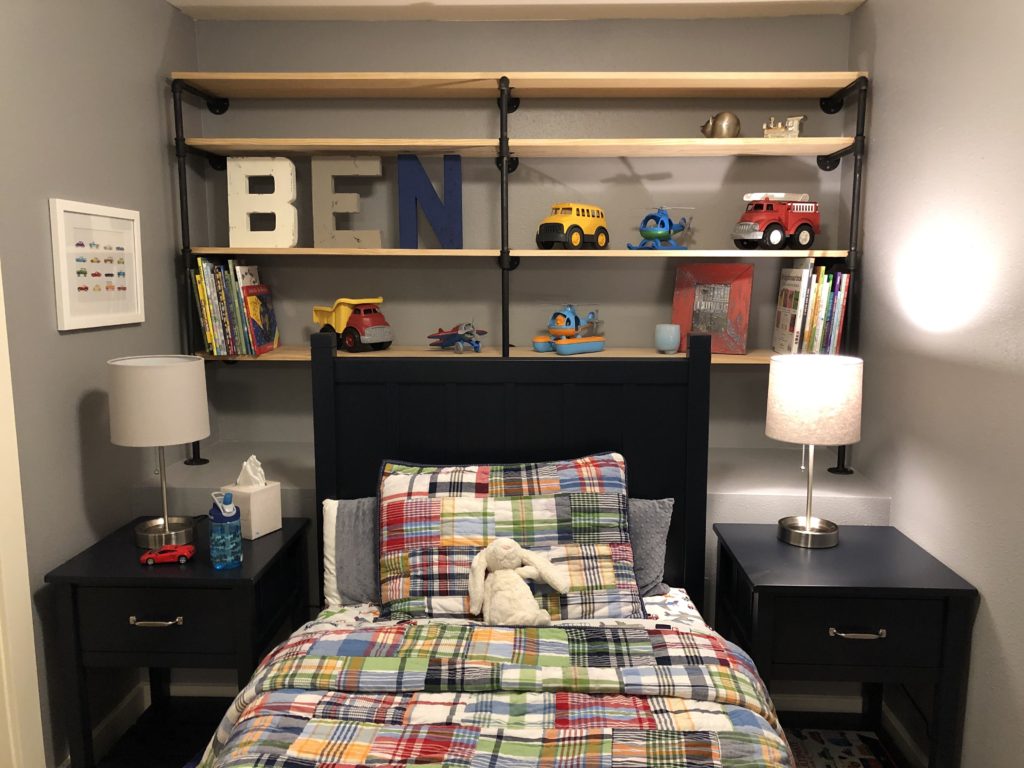 I could go on for a really long time about what Ben is up to these days. He is a ball of fun and energy and he’s just an all-around great kid. Three hit him like a ton of bricks – we’ve seen so many changes in the last week or two and it’s been really fun to see the development.  Ben is acting like such a big kid these days. I am so excited for summer with a three-year old!