We celebrated Ben’s second birthday last week with a big family trip over the mountains to Leavenworth, followed by mini celebrations all week long to honor the sweet little life of our boy. It seems like he’s grown up and changed so much in the last week – he really turned two. We’ve had a lot of firsts and are so excited to see what the “terrific twos” are all about. 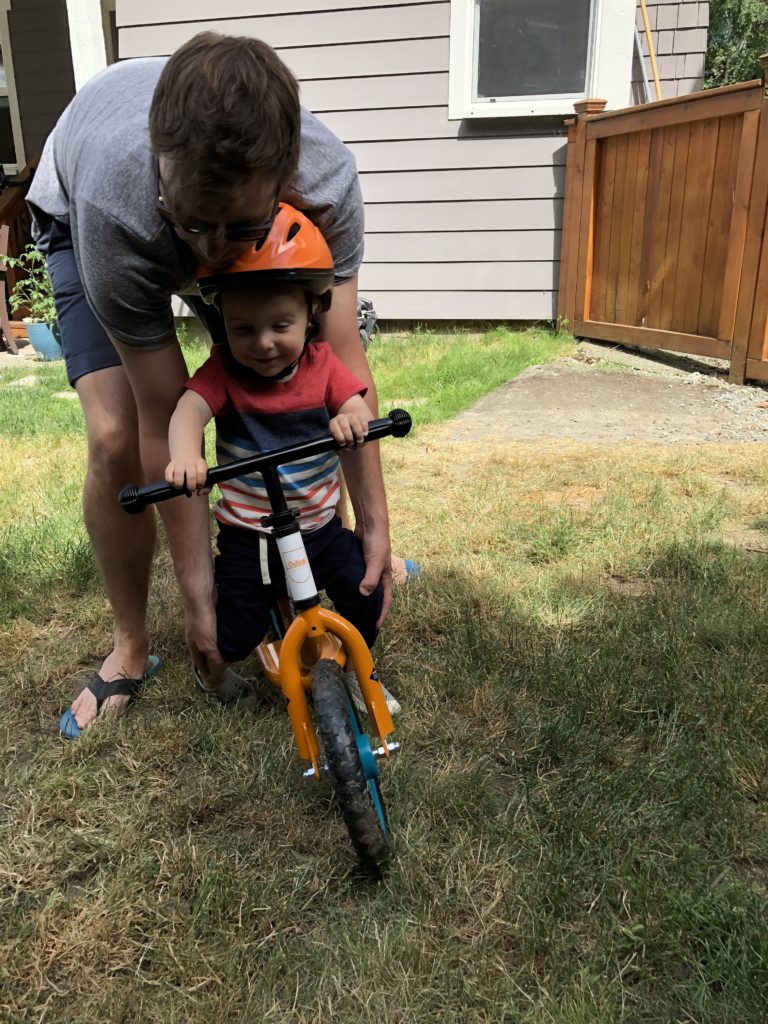 In the last month Ben has turned into “Bossy Ben” which, for now, is hilarious. I love hearing his very strong opinion about certain things – for example, that it’s not okay for anyone but dada to sit in dada’s spot at the dining room table. Ben is very good at expressing his opinion and preference. He very freely says “no way” and we’re starting to work on that becoming “no thank you” though it’s still pretty funny hearing him say “no way” all the time. 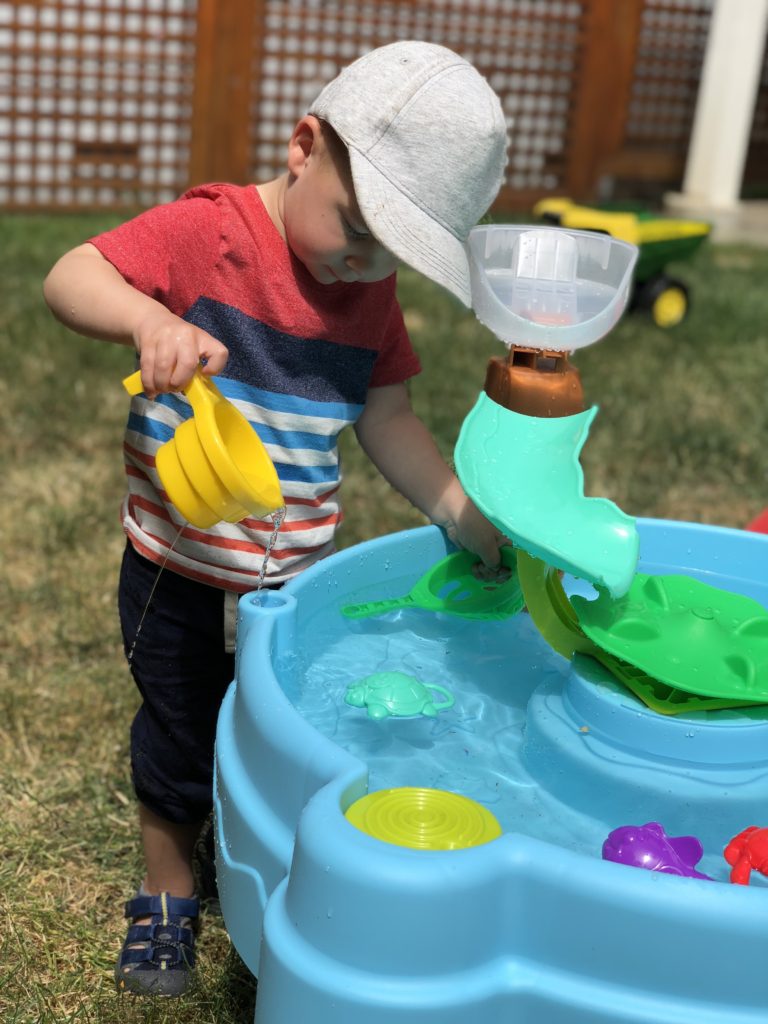 The big themes we’ve been seeing for the last 6-8 months have been around communication and that’s no different right now. We’re working on pronouns {btw – I’m done referring to myself in third person – once I mostly stopped that I realized how ridiculous it is. I think all it does is confuse him!} and complete sentences that include please and thank you. Ben has been asking “did you hear that?” or “what is that?” alllllll the time, which is so fun to start to get a closer glimpse of what’s going on in his mind. 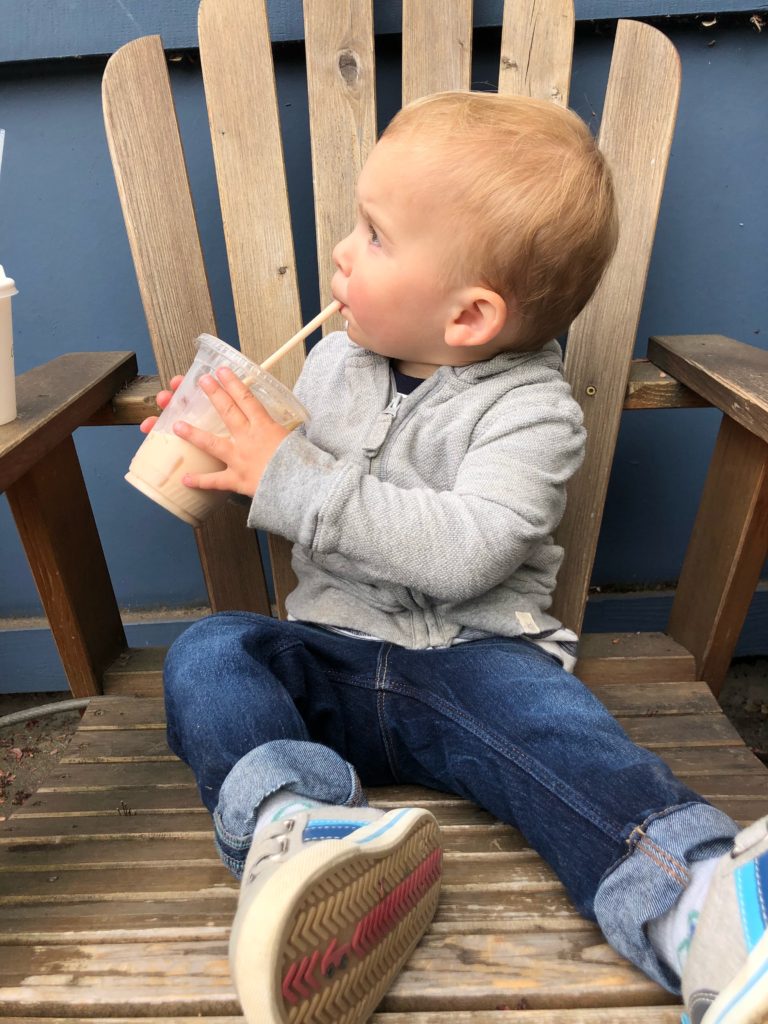 Definitely along with the bossiness and communication comes manipulation, ignoring us and tantrums. Ben’s doctor told us that with his vocabulary and communication abilities he’d start to try to manipulate us earlier than most kids – yeah, we’re already there. It’s really funny. Tantrums are mostly avoidable at this point but of course depending on the circumstances there’s no way around them. Ben is very strong-willed and stubborn and has clear preferences, so talking him through things in difficult-for-him situations is critical. Alex is really good about diffusing the tough moments – mostly through humor or doing something to annoy Ben {not sure how that works but it does!}. Naturally, as a toddler, Ben feels feelings very strongly, though it’s also very mood/sleep/hunger dependent. 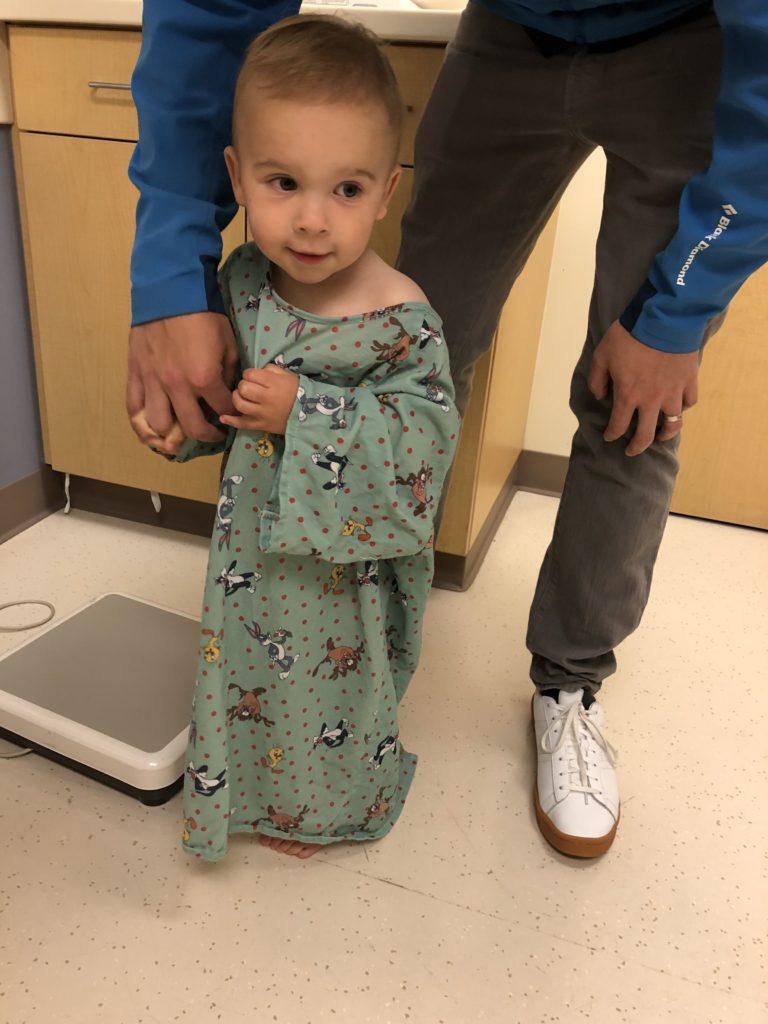 Finally it seems like learning colors is starting to click with Ben! That’s been really fun – up until about the last week or so I didn’t think he had any understanding of what different colors were, but now it’s clear that he’s getting it. I’ve been really working on it, so it’s nice to see the concept sinking in. 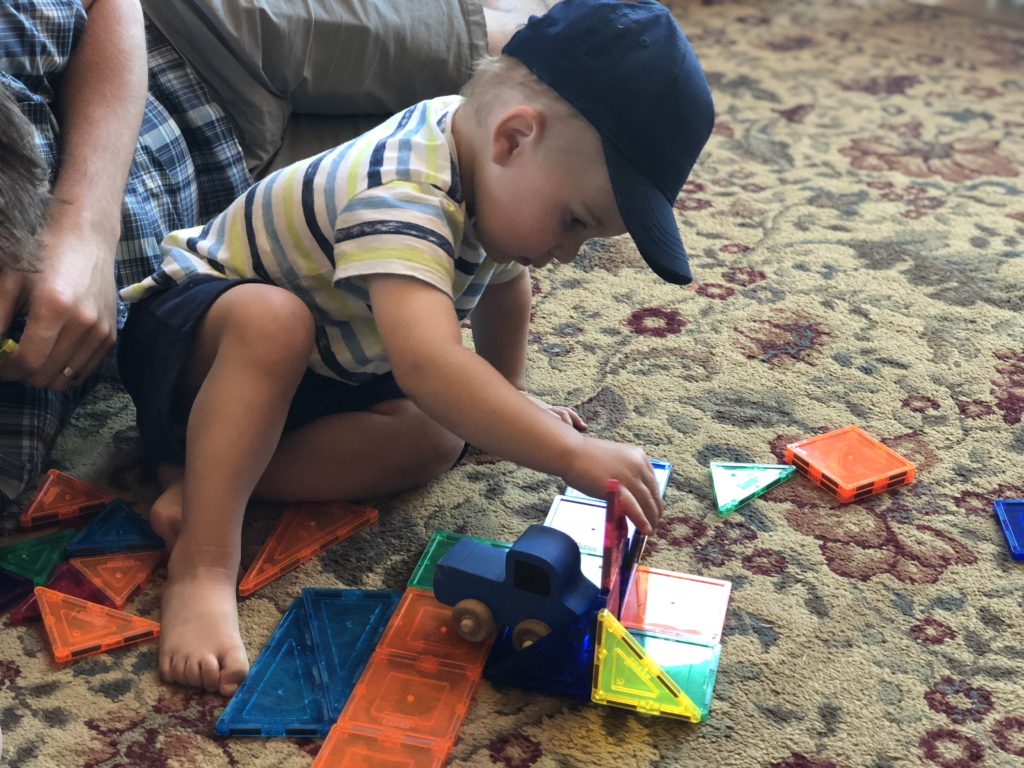 We just ordered a little glider board for our stroller because Ben wants to be an independent walker and not always a rider. The glider board goes under the parent push handle and is like a little spot for him to stand and hold on, rather than sit in his chair. He frequently requests to to get out and walk, so this is sort of a happy medium if we are out on a longer walk and he needs a ride but doesn’t want to sit.

Over the weekend we went for our first family walk without the stroller. We took Jackson up to the park on Sunday morning and per Ben’s request, left the stroller at home. Ben was a stellar listener and stayed with us and asked to hold hands when we crossed the street. It was wayyyyy less exhausting and chaotic than I expected! 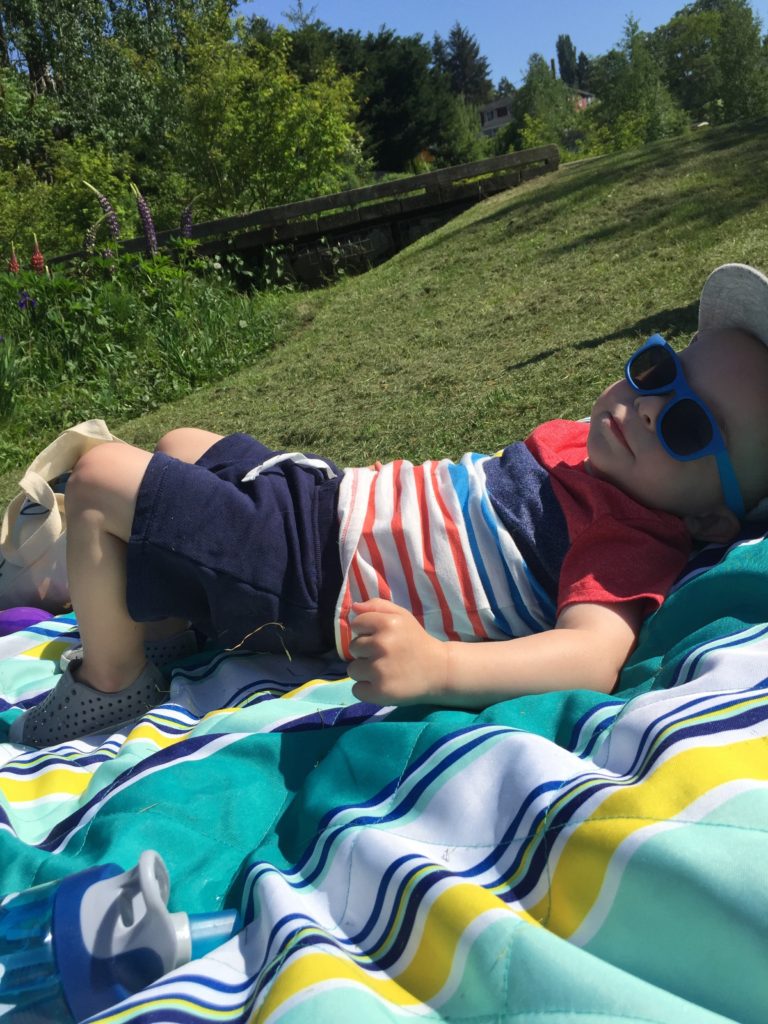 For the last month or so we have been sloooooowlyyyy pulling off the bandaid of providing way too much support to Ben when he goes to sleep at night. Last weekend we ripped that bandaid right off and Ben is officially putting himself to sleep unsupported. I was 100% the barrier and finally when he turned two I became ready to put him in his crib, say goodnight and then walk out and close the door. We had a lot of conversations with him about the change and he handled it so much better than I expected! When we left the room he just laid down, cuddled up with his stuffed animals and fell asleep. There was absolutely no issue whatsoever. I guess he’s been ready for a while!

We are approaching the end of diapers! Alex and I are pulling the plug and starting potty training this weekend. I’m pretty excited to see how it goes and how he grasps the concept. It is so fun to watch him learn a new skill and see how proud of himself he is. We’ll do a two-phase approach where wake-times are diaper-free effective immediately and forever, then sleep-time will still be with a diaper for the time being since Ben still sleeps in a crib. Wish us luck!

Our little mover has become quite the climber! Ben is so agile and athletic – I continue to be amazed by him at the playground. He’s getting stronger and able to climb and pull himself up on things, hang from bars and be more sturdy all the time. He tested out the “big kid” swing for the first time when we were in Leavenworth and while we’re not ready to push him very high, he’s totally got it. 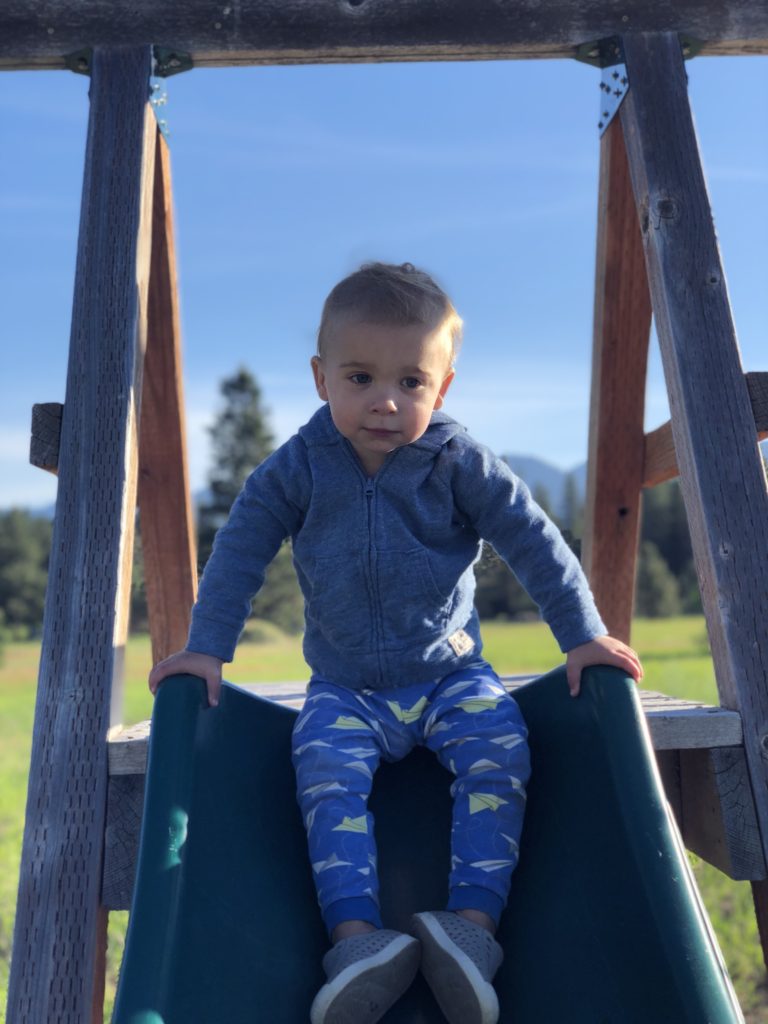 I can’t believe all of the “big kid” things that Ben is doing now. He really, really turned into a two-year old.

I think this will probably be my last month-by-month update about Ben. Having this blog as a way to keep track of our family, watch Ben grow and help our family stay on top of what’s going on with us has been so wonderful. I sometimes use it as a journal, tracking things for myself, and other times use it as a way to spread the word about what’s going on in our little lives. Thank you for reading!