Alex and I got to meet our little boy, Benjamin Ames, earlier this week on May 31st. Ben was born at 33 weeks 2 days gestation and weighed 3 pounds 3 ounces and was 15 inches long. The story of his arrival, including the days and weeks leading up to it is quite a dramatic one, but thankfully since he’s been in the outside world, all of our lives have calmed down and are forever changed for the better. 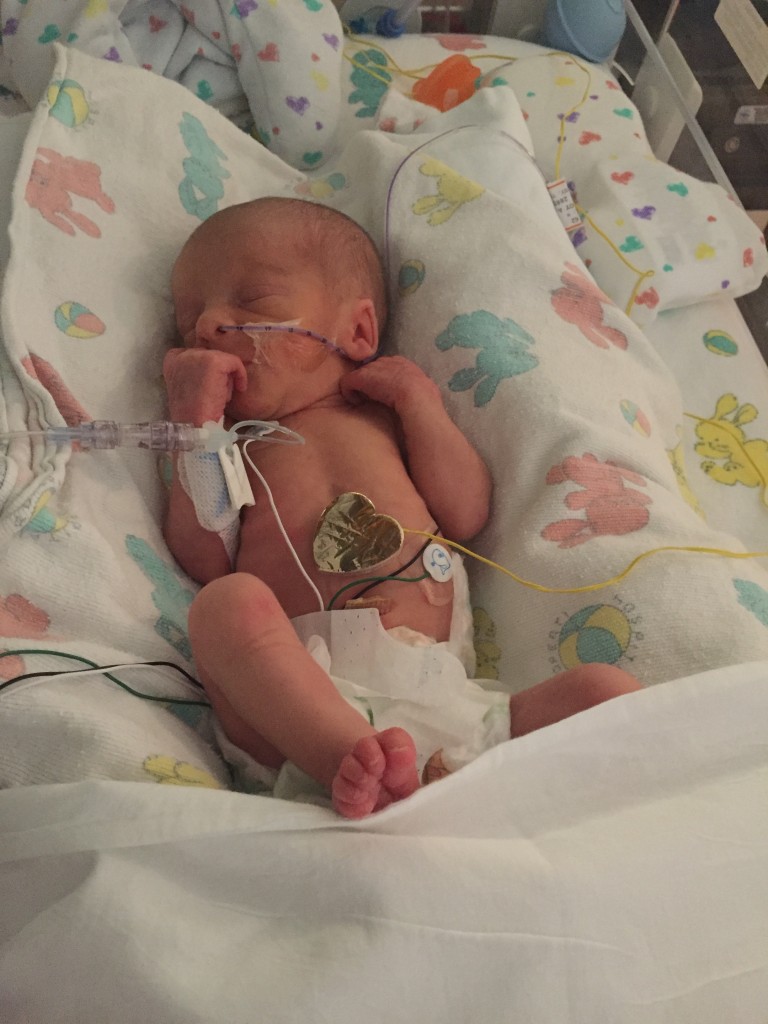 After knowing for three and a half weeks that our babe had a “growth restriction” in utero and spending two and a half of those weeks in the hospital we had mentally prepared ourselves for pretty much anything. Throughout that time, the baby was being regularly monitored to keep track of his heart rate, the amniotic fluid levels and the flow restriction and rate from his umbilical cord. We knew at any time if any of those elements changed for the worse that we would get to meet our baby. The doctors were simply waiting for the moment when the tables turned and it became safer for our babe to be born than to stay inside.

The evening of May 30th was a rough one for me and the baby – I was hooked up to the monitors for several hours throughout the night and kept having contractions. The baby couldn’t handle the contractions very well, so the monitor was picking up an unusually high number of heart rate drops that night. It was really stressful and I was uncomfortable and nervous about the situation. The next morning I had an ultrasound and the results showed that the amniotic fluid levels were at the very low end of normal and that there was an absence of flow from the umbilical cord. The doctors made a quick decision based on the ultrasound and the baby’s heart rate from the night before that it was time to deliver the baby.

I had about two hours from the time they made the decision until the time I was in the operating room, so it didn’t feel terribly rushed. And yes I’m being serious that I didn’t feel rushed – my hope for the situation was that I had an hour and that it wasn’t an emergency, and I had both! Alex and I had a couple moments to ourselves to process what was going on and we got to let our parents and a couple close friends know that we were going to meet our baby that day.

The whole process of delivery was really surreal. The nurses had prepped me in advance to know what to expect for the c-section and that was really helpful for me. Because of the baby’s prematurity there was a whole crew of people in the OR waiting for him to arrive – the neonatologist, a few nurses for the baby, a respiratory therapist for the baby, plus the anesthesiologist and the surgeon and nurses and all of the residents and fellows who were assisting {I was at a teaching hospital} in the process. I think there were probably 12 doctors and nurses altogether. 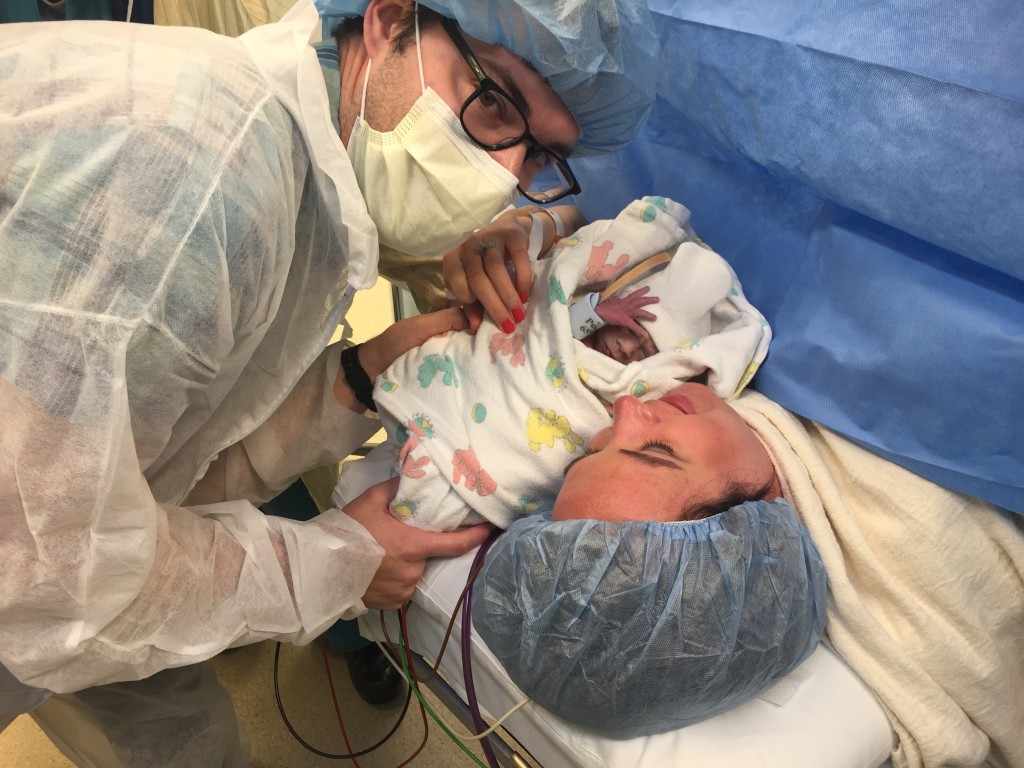 Everything happened rather quickly – once I was numb it was really less than 30 minutes until the baby was out. I was really just laying there and all of a sudden I heard “they know it’s a boy, right!?” and then the baby let out his first cry. A few moments later they carried the baby over to a baby bed to assess him and make sure he was okay, meanwhile he was crying the whole time, which was terrific to hear because I knew it meant that he was okay. It was an overwhelmingly emotional moment knowing that our baby had been born. 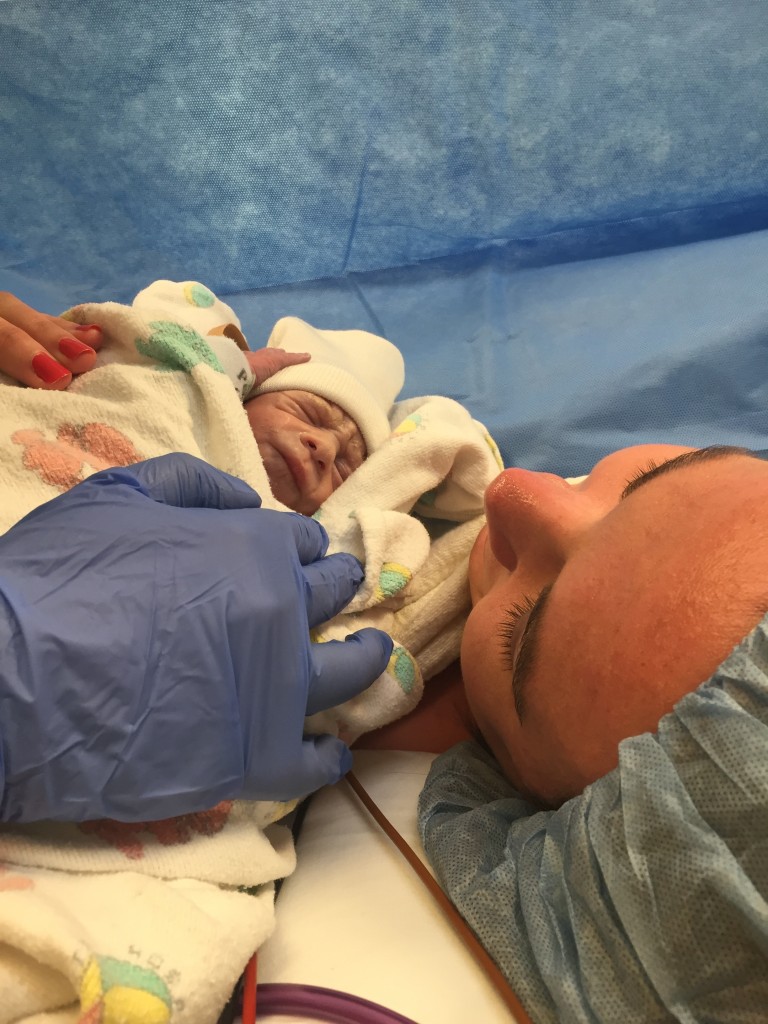 Benjamin Ames Allen was born at 11:21 that morning. His Apgar scores were 8 and 9. He weighed 3 pounds 3 ounces and was 15 inches long with a 29 cm head circumference. After they did the initial assessment of him they wrapped him up and brought him over to see me briefly before they took him up to the NICU. 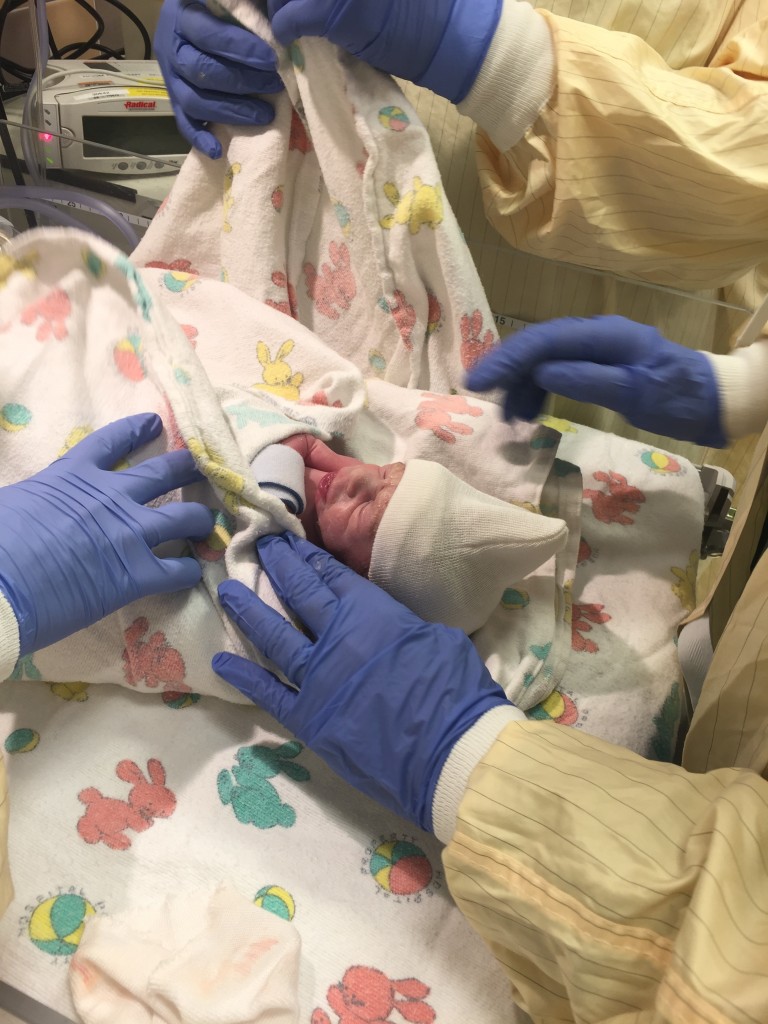 Alex went up to the NICU with Ben while I stayed in the operating room getting put back together and then I spent a couple hours in a recovery room. It was a really weird experience for me because everybody just kind of left and I was just hanging out getting stitched back up. 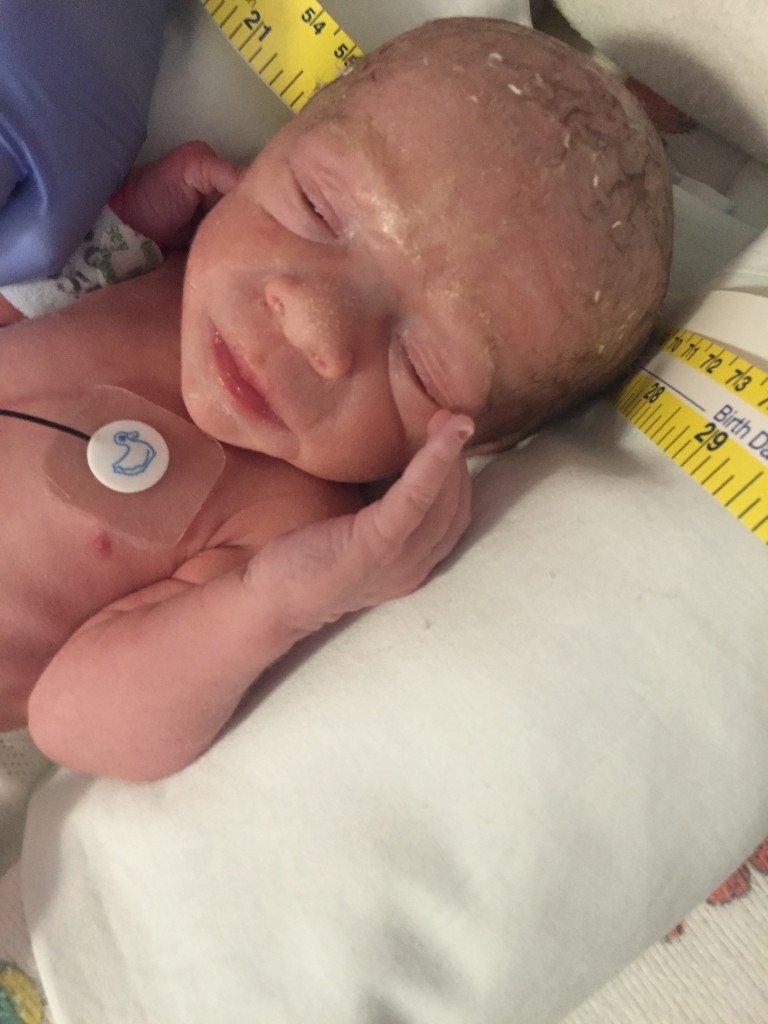 Alex got to participate immediately in Ben’s care and learn first-hand what was going on with him. Because of Ben’s prematurity he will be staying in the NICU for a while – they’re not able to give us an accurate estimate yet because they’re still evaluating him, so for now they’re saying we should plan for him to stay until his due date. 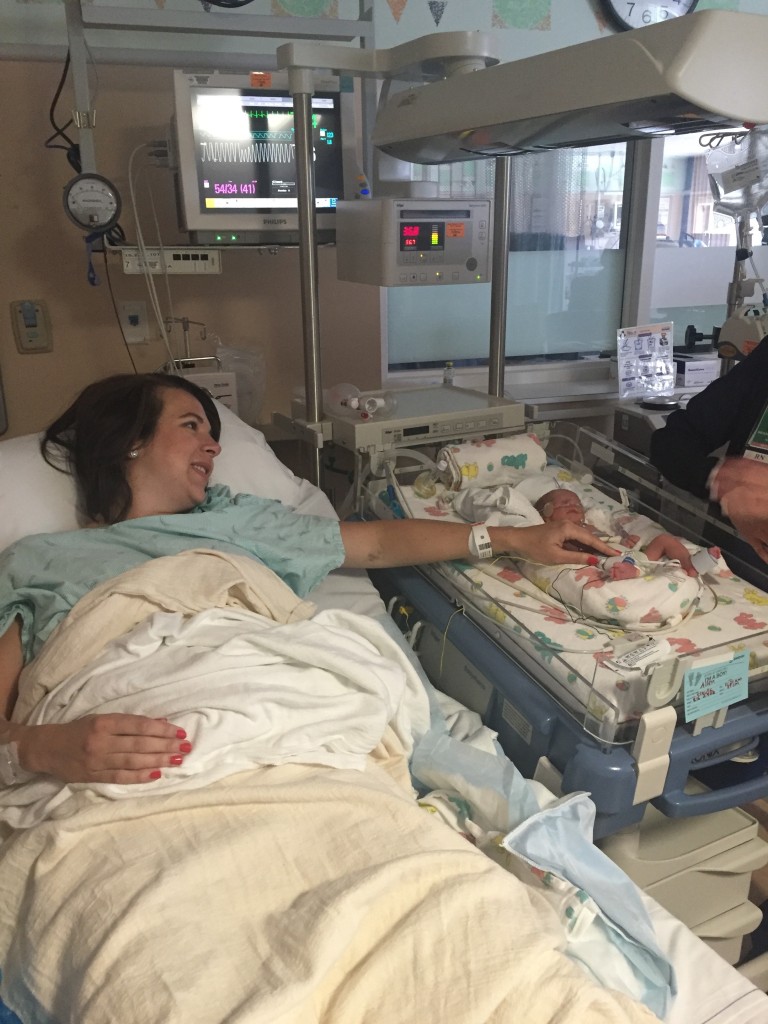 So far, in Ben’s first 72 hours of life he is showing tremendous strength and is doing exceptionally well. We’re not surprised with this at all given how well he put up with the less than ideal circumstances while he was in utero. We had two names picked out for him {no we aren’t sharing the other one} and we opted for Ben over the other name because it’s a more easy-going, calm name and we felt like throughout this whole situation he was so resilient and strong and just kept right on going even though his environment was really awful. We think he’s going to be one tough little cookie who will keep rolling with the punches. As for his middle name, Ames, we chose that because Ames is the town that Alex and I met in Iowa. 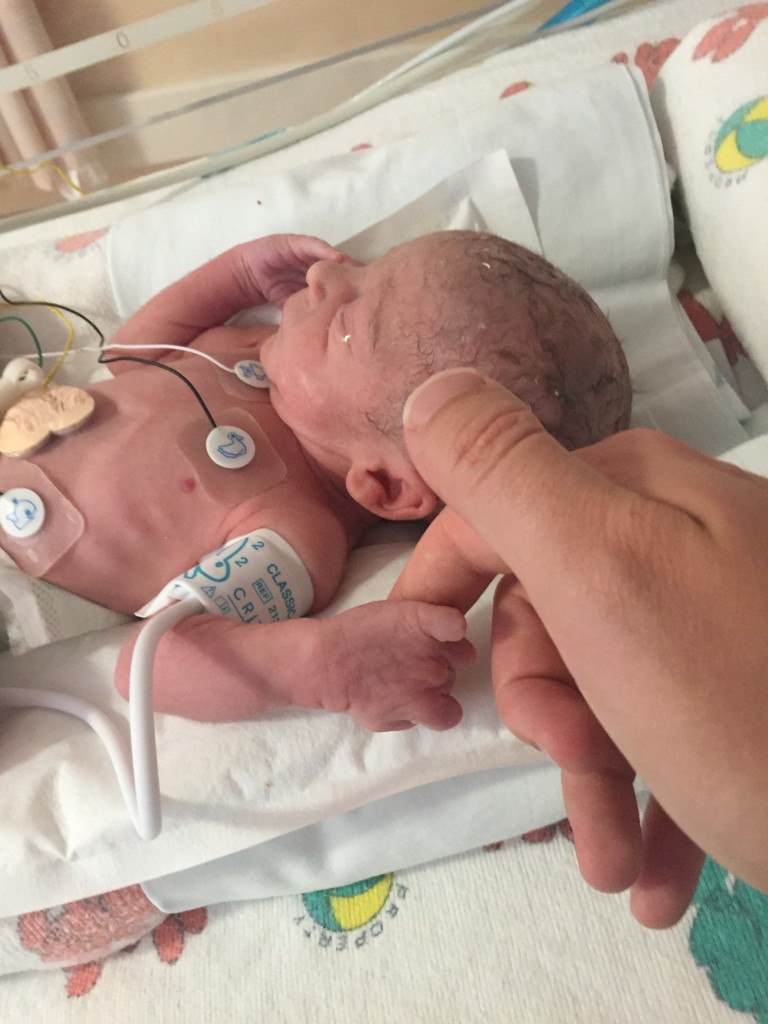 We are so proud and overjoyed to be Ben’s parents and to have gotten to meet him already. While the circumstances surrounding his birth have been stressful and extremely difficult we are treating the situation like we’re getting a little sneak peak into meeting our kiddo early while he’s still “cooking” in the NICU for the rest/most of the rest of the third trimester. 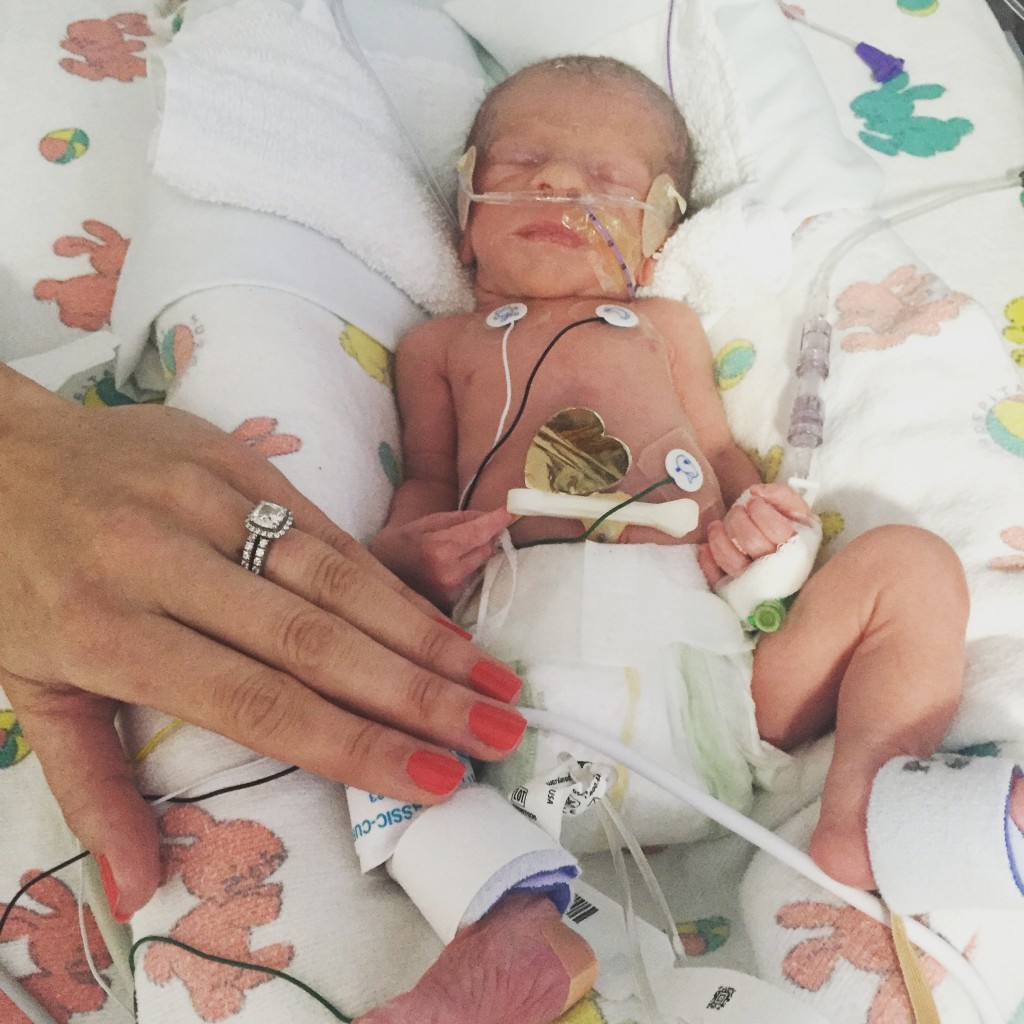