We are on day 15 of a rollercoaster ride with our little babe right now. Just over two weeks ago, I/the baby was diagnosed with Intrauterine Growth Restriction {IUGR}, which means that there is something causing him to not grow properly. Our baby is currently below the first percentile for his size. In the early days after the diagnosis the doctors were trying to figure out what was going on and determine the threshold for when he would be safer inside my uterus versus outside in the world. I underwent a ton of testing and monitoring and spent 5 of those days in the hospital. The doctors finally have something to go off of now.

Yesterday at my regular check-up the ultrasound picked up some changes in the resistance of the umbilical cord flow. This is called “absent intermittent end diastolic flow” and it means that sometimes there is an absence of flow between the placenta and the baby. Because of this change, I have been admitted to the hospital indefinitely – likely until I deliver the baby.

The doctors want me to be on more continuous heart rate monitoring {of the baby} to make sure that his heart rate is stable and he’s still content inside. They are looking for him to have a normal baseline heart rate, but also for his heart rate to have accelerations, which happen when he is moving around. If he was too lethargic to move around he wouldn’t have the accelerations and that would become a cause for concern. 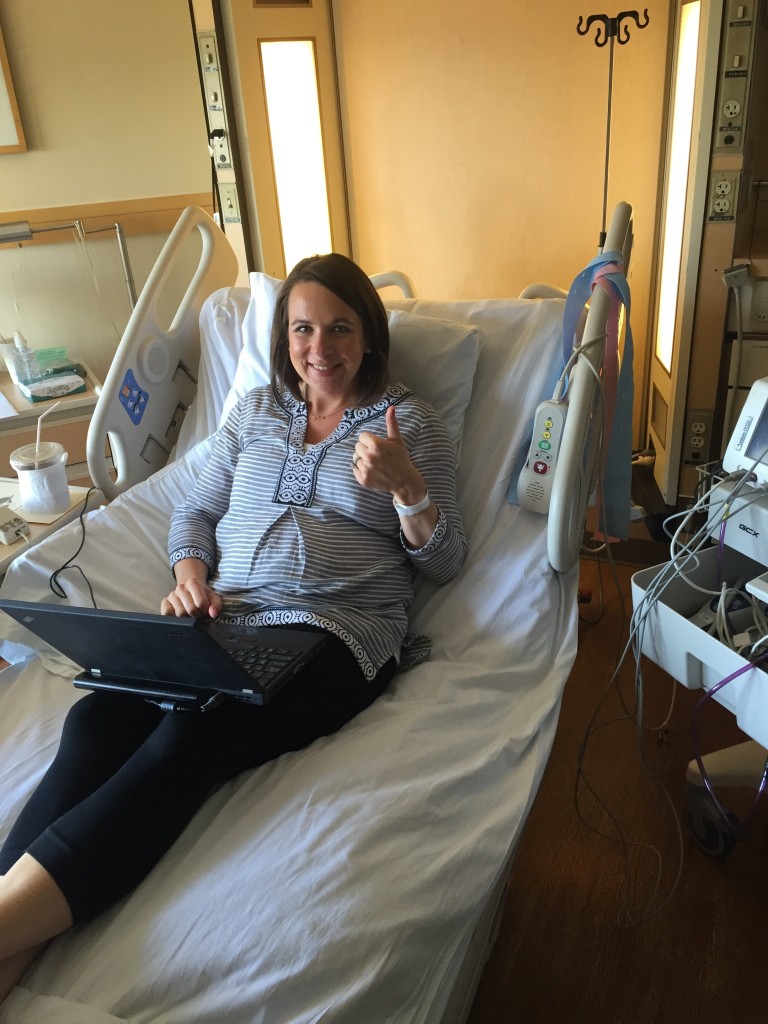 Last night while I was being monitored the baby had a major drop in his heart rate and it took him 6 minutes to recover {that is a long time}. This caused an emergency situation – I ended up on an IV and oxygen within the first 2 minutes and getting sent over to labor and delivery for an emergency c-section. Thankfully while we were en route to the OR the baby recovered and I avoided that situation. I spent the following 14 hours immobile and hooked up to the monitors making sure he was still okay. We almost met our kiddo yesterday evening!

Aside from that big drop, right now, the baby is showing us that he’s still able to thrive inside and that he’s still stable. There are a lot of signs, though, that say that the time where the threshold will shift and he’ll be born is approaching. I’m currently 31 weeks and 6 days pregnant and 34 weeks seems to be the end of the line at the absolute latest. And yes, every day really does count.

It would be fantastic if we could hit all of these milestones because every day that the baby stays inside is a great day. Sometime between 32 and 34 weeks, though, the doctors will determine that they can create a better environment for the baby in an incubator than my uterus can right now.

Once the call to delivery is made, it will happen extremely fast, except for maybe if he doesn’t grow, then we may get a little bit more of a “planned” c-section scenario. The doctors are not ready for him to be born yet, but once I cross the 32 week mark I think they’ll have less risk tolerance for keeping him inside. After the baby is born he’ll spend some time in the NICU because he’ll be premature and tiny. I’m waiting to get a consultation from a neonatologist, hopefully today, to talk to me about some of the things we can expect with a NICU baby.

We don’t know where we are on this rollercoaster ride, but I have a feeling that parenthood is just going to be a continuation of it! Maybe we’ll never get off?