It hasn’t felt like a particularly busy last few weeks but I guess things are happening and making time fly by, as per usual. Here are the happenings around the Allen household this week:

Alex enjoyed a ski tour with Carrie and Patrick last weekend. They skinned up a trail somewhere near Stevens Pass, took a break at the top and then skied down. Carrie and Patrick are some of our favorite people to ski with and now Alex is elated that they’re getting into back country skiing, too.

We have got ourselves a VERY naughty puppy. Month 9 has been one of the most difficult months so far. I think it’s been so tough in part because Jackson hasn’t been neutered yet, but also because we have been having a really inconsistent schedule and routine the last few weeks. It’s also hard because we know how darn good he can be and when he behaves like a jerk we know that it’s not his true colors, so that makes it all the more frustrating.

In other Jackson news, our pup had his first grooming appointment earlier this week. We had taken him to the groomer a few times a while back to get used to her and to get a bath, but this week was the first time he got a haircut and all that good stuff. He came back looking even more handsome than usual! Now if only she could groom some good manners and behavior into him, it would be even more worth the $70 price tag.

Henry has found a new spot to sleep recently. He’s been curled up next to the pillows on our bed and couldn’t look sweeter if he tried.

We made it a year without having cable TV! I really shouldn’t brag about that because it certainly doesn’t mean we didn’t watch TV over the last year. We canceled our cable package and relied on Hulu Plus and Netflix for our TV fix. With the X Games this weekend and the Olympics in a few weeks, alongside my love of watching the Food Network, we decided to get a cable TV package again. It’s literally $13 more each month {why did we cancel in the first place!?} than our current Internet package, plus $10 for an HD DVR, and we’ll be canceling our $15 Hulu Plus account, so it’s basically a wash. I am looking forward to having cable again!

The weather has been sooooo nice this week! It almost feels like spring {sorry Minnesota friends/family!}. We have sunny skies and flowers and trees starting to bud and flower here in Seattle. This nice weather in Seattle does not make for great ski conditions, though, so I’m going to be okay when the rain and cooler temperatures come back so that we can get some snow in the mountains.

Alex stayed home from work two days this week because he got the nasty bug that’s going around. He is on the mend and back at work now but still isn’t 100%. Finally after 18 days my cough turned a corner and has now almost subsided; however, my abs feel like I’ve been doing nothing but sit-ups for those 18 days and I can’t hardly use my upper ab muscles. Oh the joys of being sick!

This week was my second Pilates session with Mary, my friend and new Pilates instructor. I am so happy that I’m able to take some time out of my week for a Pilates lesson. I am loving it! 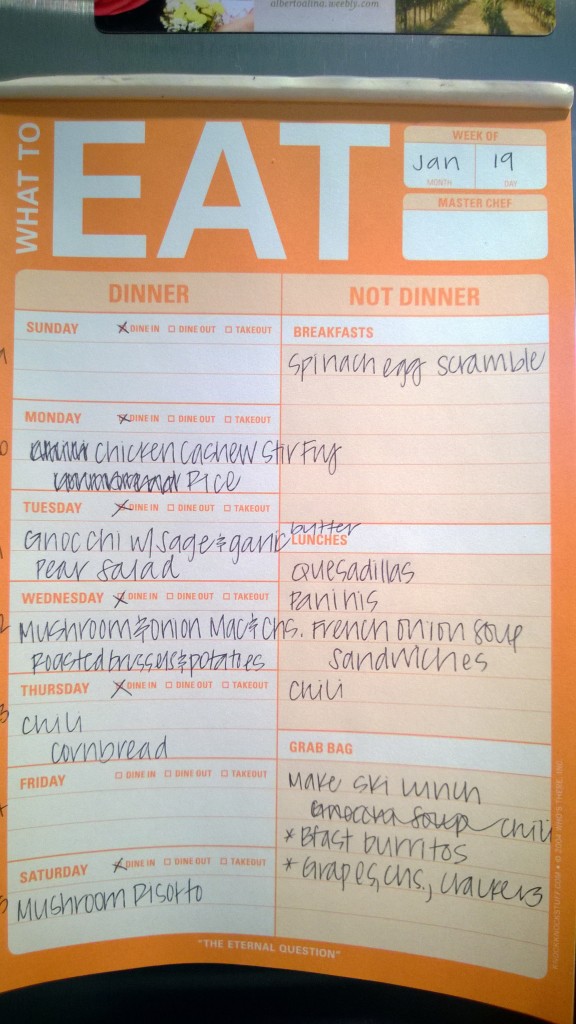 We’ve got some good food on the menu this week. I am excited to take some chili with us to the mountains this weekend. It’s such a great lunch on a ski day!