The weather sure is changing here! We’ve had SUCH a nice fall – so many gorgeous, crisp days! Now we are bracing for a big “storm” that is approaching now and is supposed to last through the weekend… 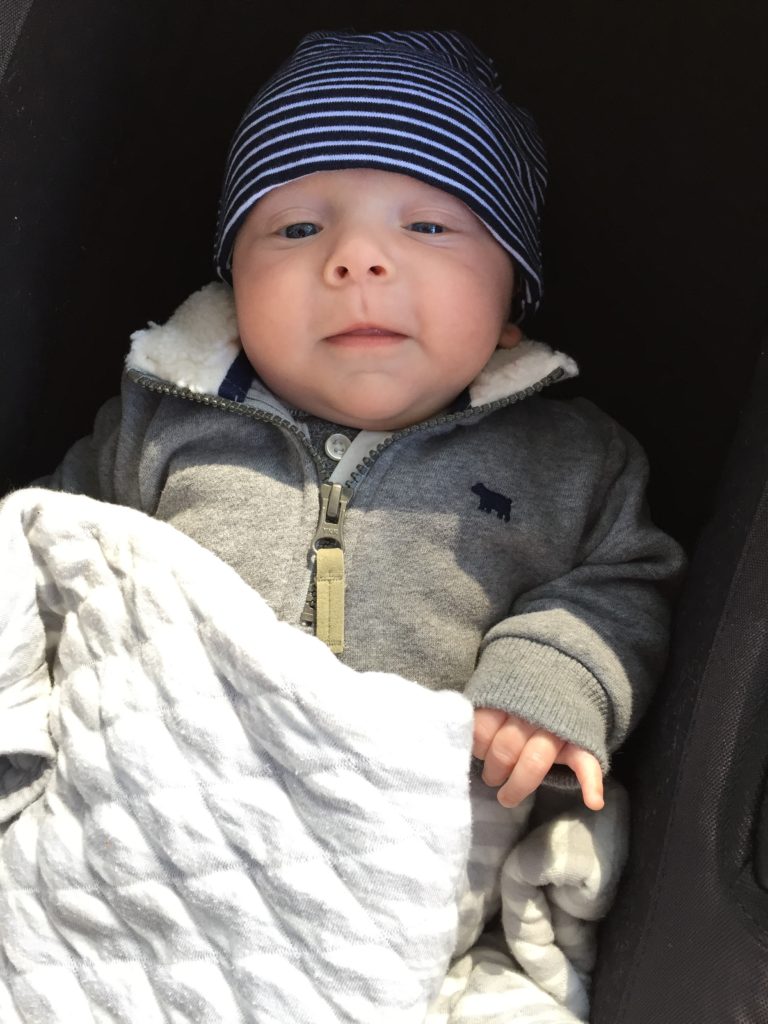 We’ve been adjusting really well to our new schedule with both Alex and me being back to work. If I’m not mistaken this is my fourth week back and Alex’s sixth. Our nanny continues to impress us each day with her sweetness and enthusiasm. Ben is in such good hands! 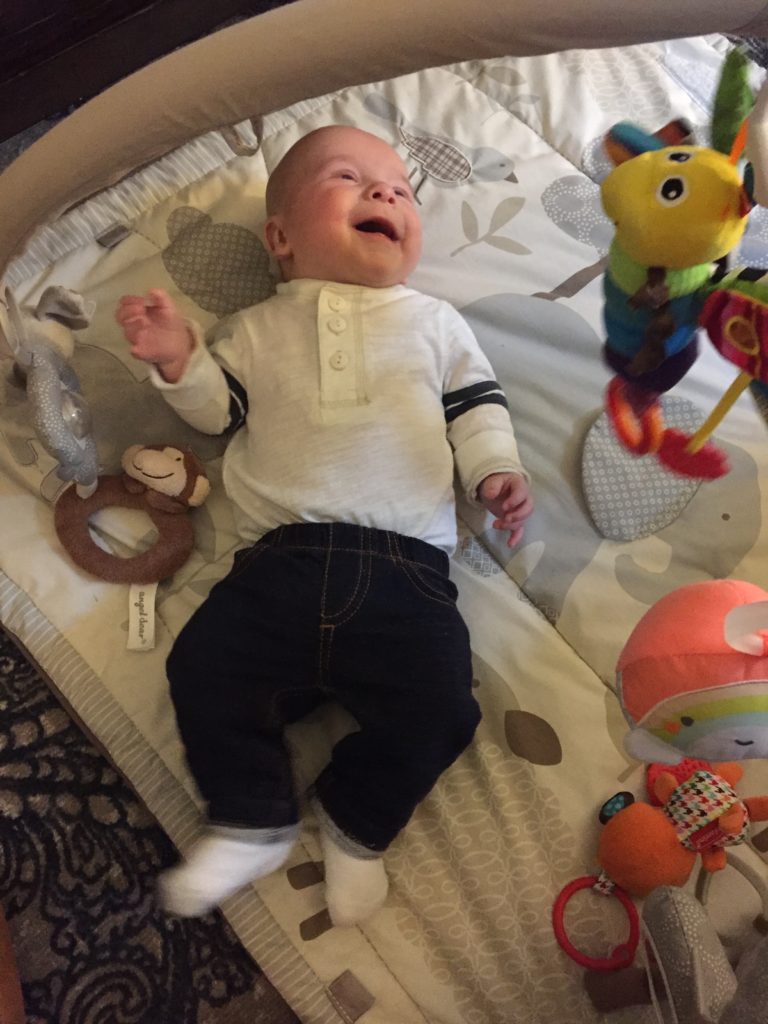 I am loving working part-time because it allows me the opportunity to spend Mondays and Fridays with Ben. And as it turns out almost all of my friends in Seattle with babies have one of those days off, or they don’t work at all, so I’ve been unexpectedly social on my days off. Most of my friends’ babies are around the same age as Ben so that makes it extra fun! 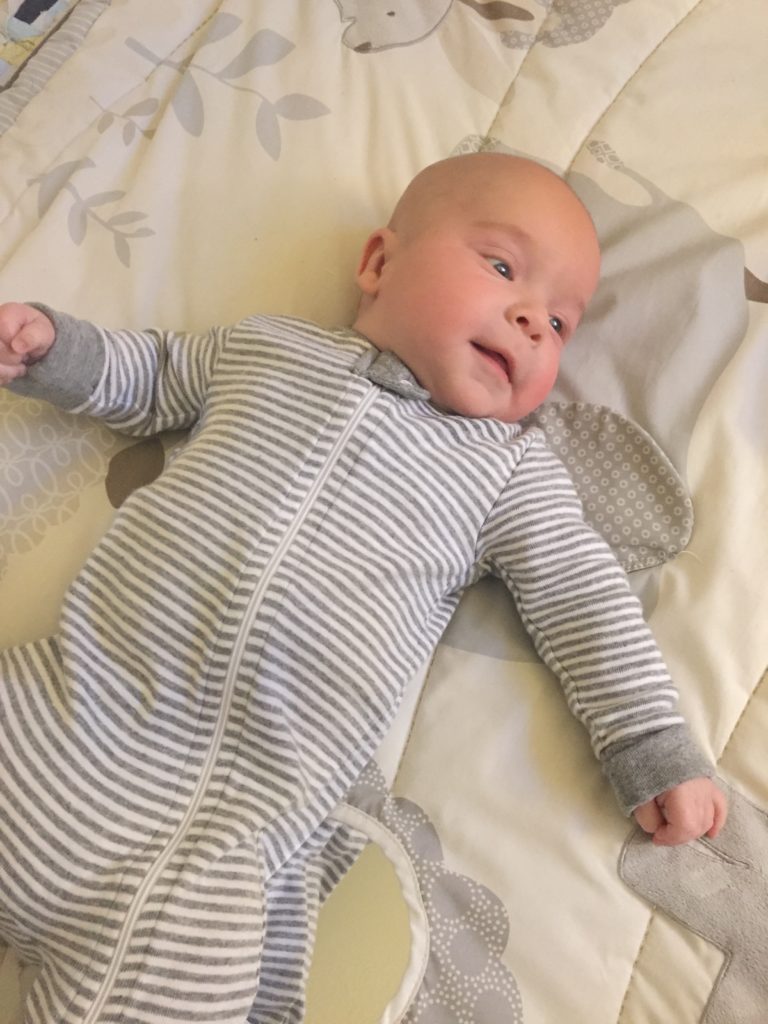 Speaking of extra fun, this last week or so has been a major developmental change for Ben. I keep hearing from friends that it just gets more and more fun, and that is certainly holding true for us. 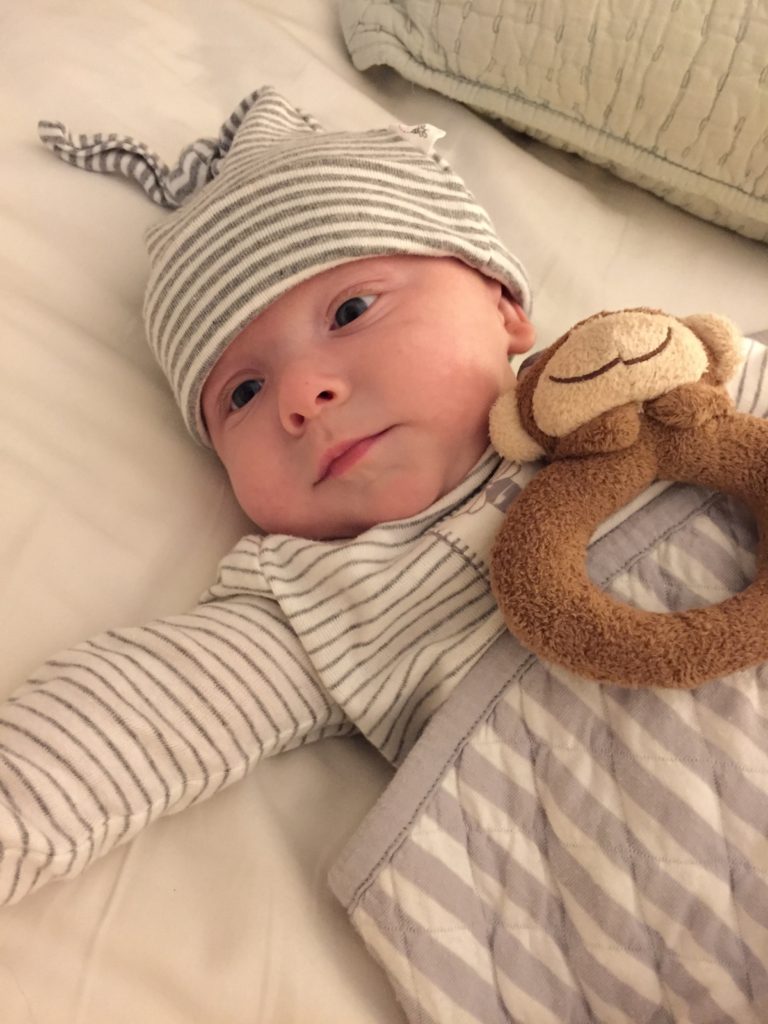 Last week at Ben’s doctor’s appointment he grabbed a tongue depressor from the doctor’s hand and brought it to his mouth – that was the first time I had seen him do that with intention. In the weeks leading up to that he had been exploring his hands and was becoming obsessed with sucking his thumb, but he hadn’t quite figured out that he could put other things in his mouth. 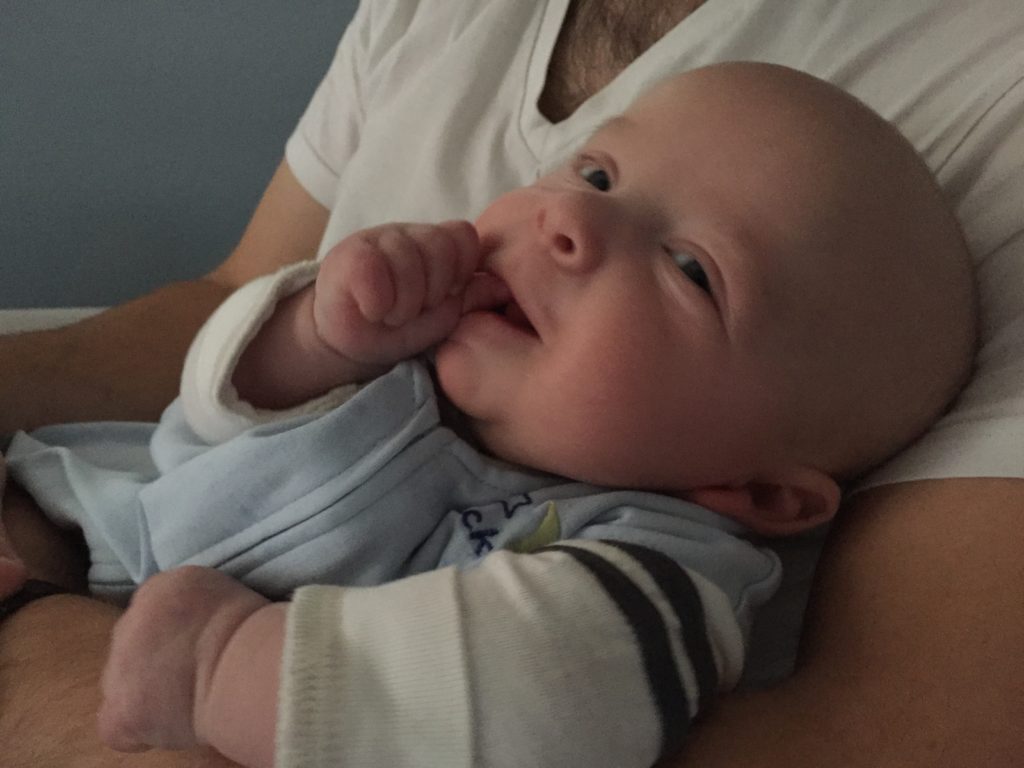 It’s been quite helpful now that we’ve gotten confirmation that he’s teething. He has been a little more temperamental, but at the same time, he’s had so many moments of enjoyment for longer and longer periods of time. We’re still figuring out how to help him manage any discomfort with teething, but so far it seems like he’s hanging in there – some times more so than others! 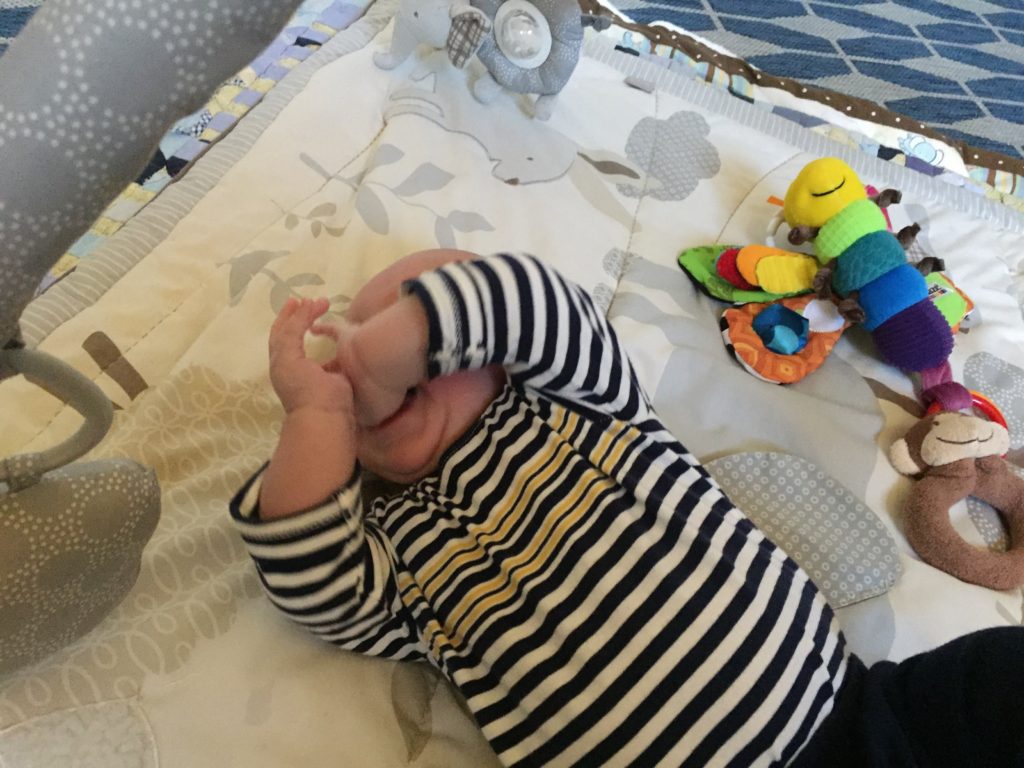 Ben is SO close to rolling from his back to his tummy. He gets up onto his side and teeters a little bit and then hangs out on his side. One day soon, we keep saying, he’ll roll all the way over. He seems to have really good body control and awareness, but we’re not sure he knows it’s a possibility that he can roll over all the way. We’re confident he’ll figure it out when he’s ready. 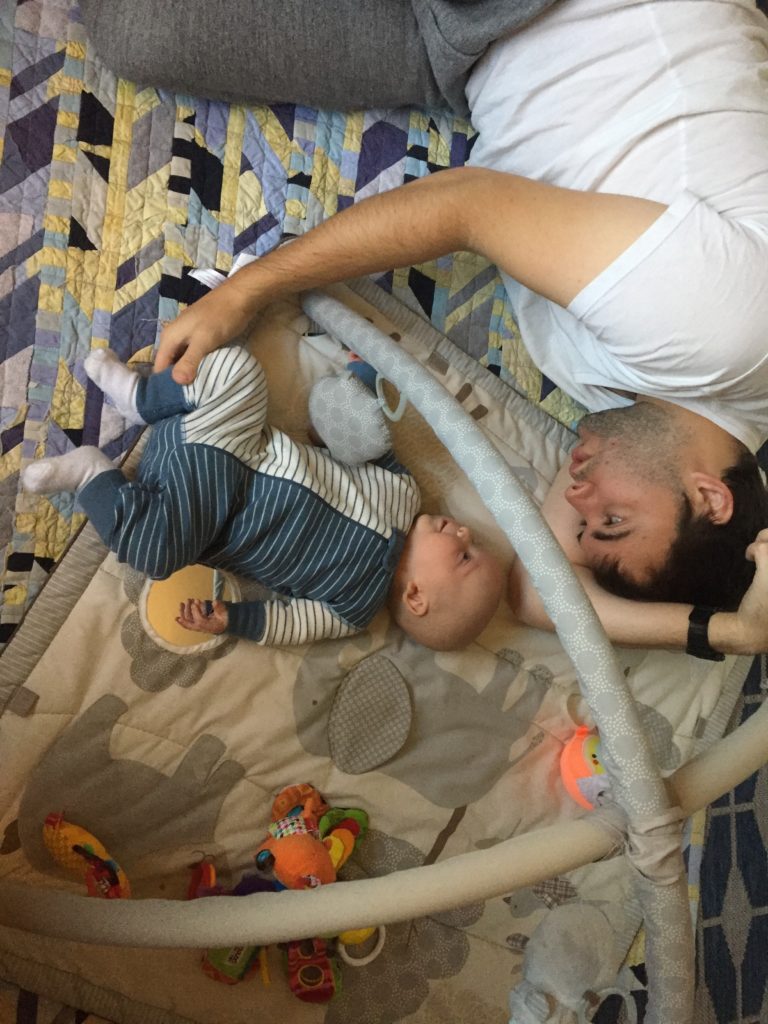 These last few weeks have brought more sleep for us all! Ben has been inconsistently sleeping through the night – I’d say on average every other day or two. My first night of getting 8 hours of uninterrupted sleep was amazing!

Since I started back up at work I have also been carving out a little time to go to a Pilates studio in my neighborhood. I’ve done Pilates at six or seven studios around town and this one is by far my favorite. The instructor/owner is incredible and I am so excited to have found her! The best part is that it’s 3 blocks away. Alex and I have also been running whenever we can – I usually just run once a week on the weekends and Alex takes Jackson once or twice during the week too. It’s so important to us to make the time to exercise. 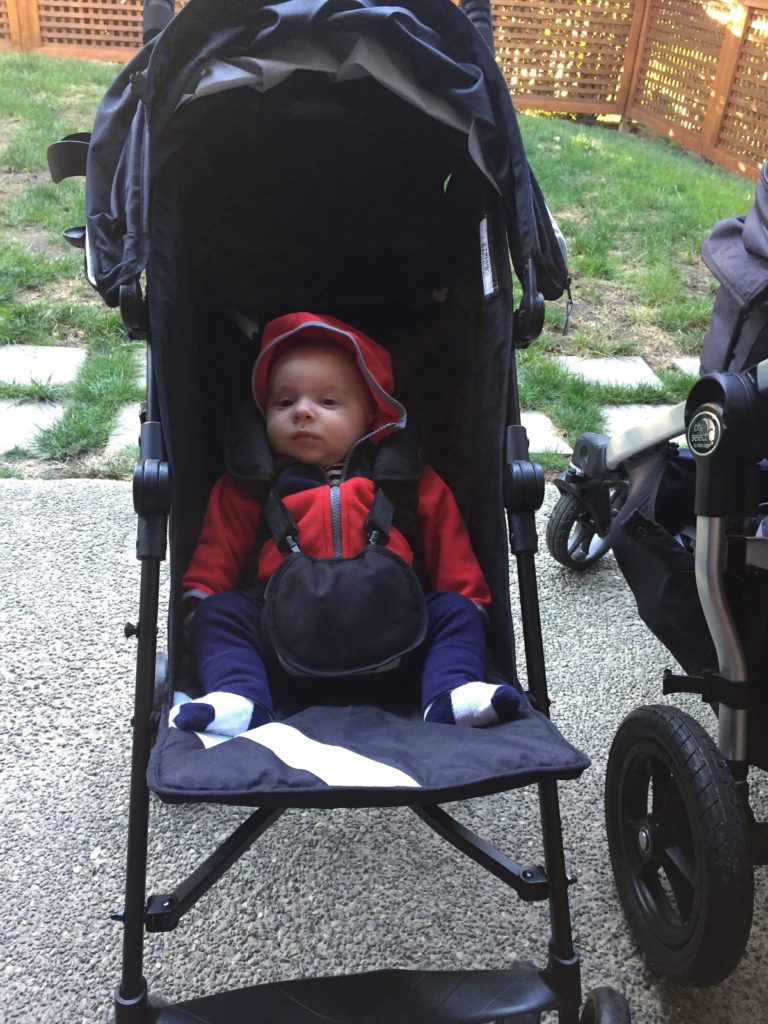 Ben got a new stroller! We opted to get a second stroller for easier transport. Our normal, primary stroller {the Baby Jogger City Select} is amazing and I absolutely love it, but it’s really big and not super easy to take to restaurants or to run errands or throw in the back of the car. Our new umbrella stroller is also great, but it serves a different purpose. Ben won’t be able to sit up in the stroller seat of our regular big stroller, but he can in this new umbrella stroller, so I think he’ll enjoy being able to look out more. 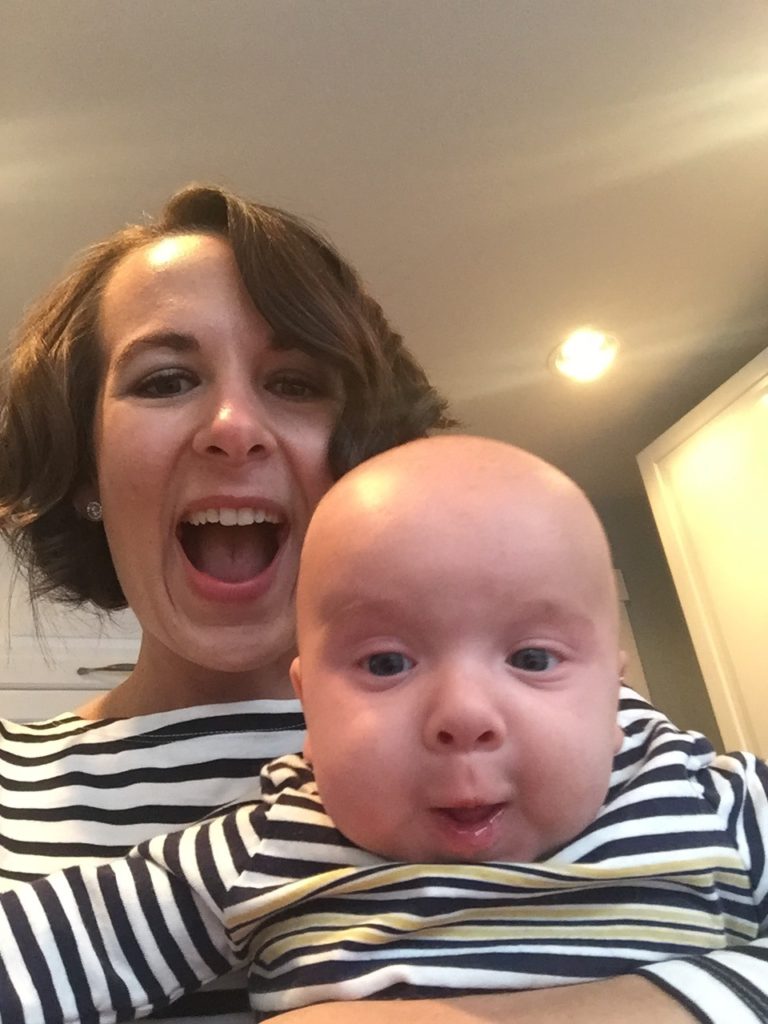 We’re having a good time over here 🙂