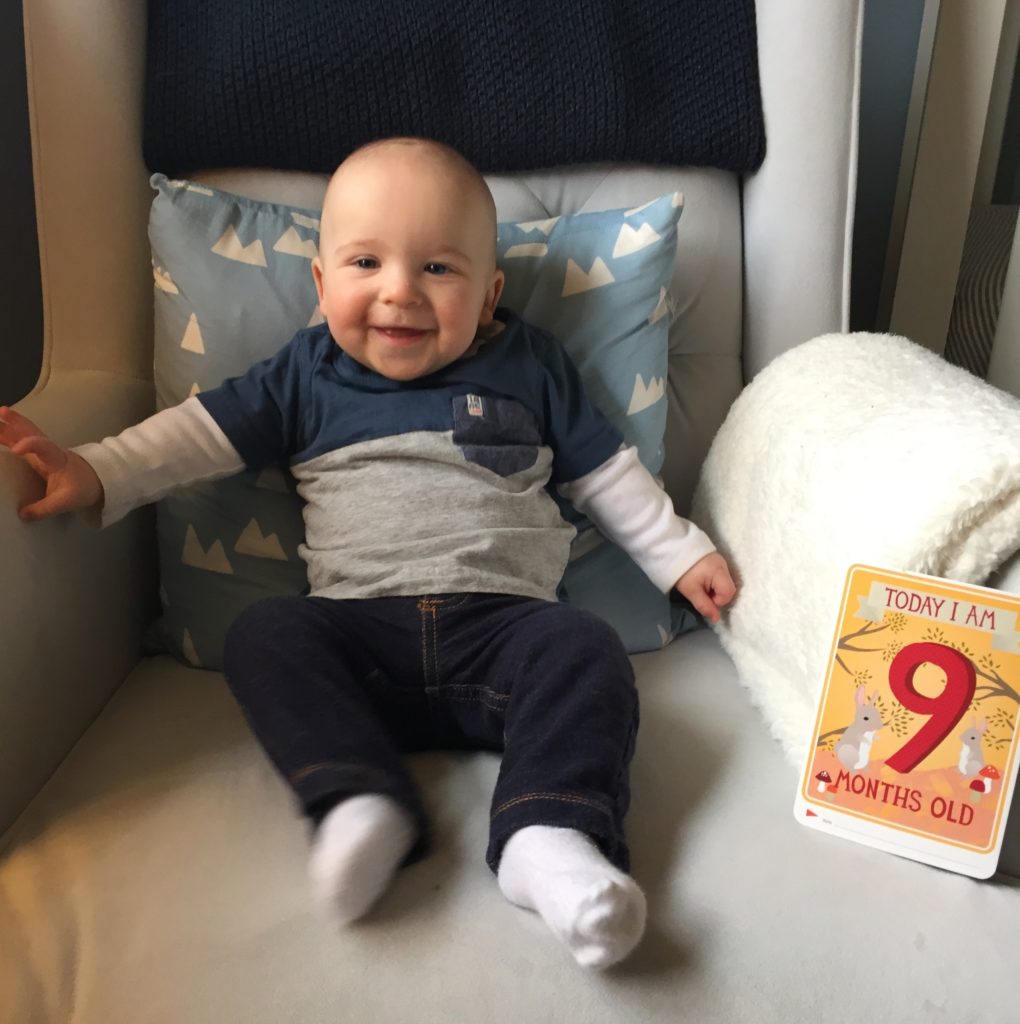 Ben just had his 9-month check up with his new pediatrician {we switched doctors to one that was closer to our house}. We love the new clinic and I really like Ben’s new doctor.

As with the last several months, Ben has become a new baby each week with all of the growing and developing he has been doing. As a 9 month-old he is crawling (!!!), giggling, chatting and wiggling his little body all over the place. We are now on our toes more than ever before! 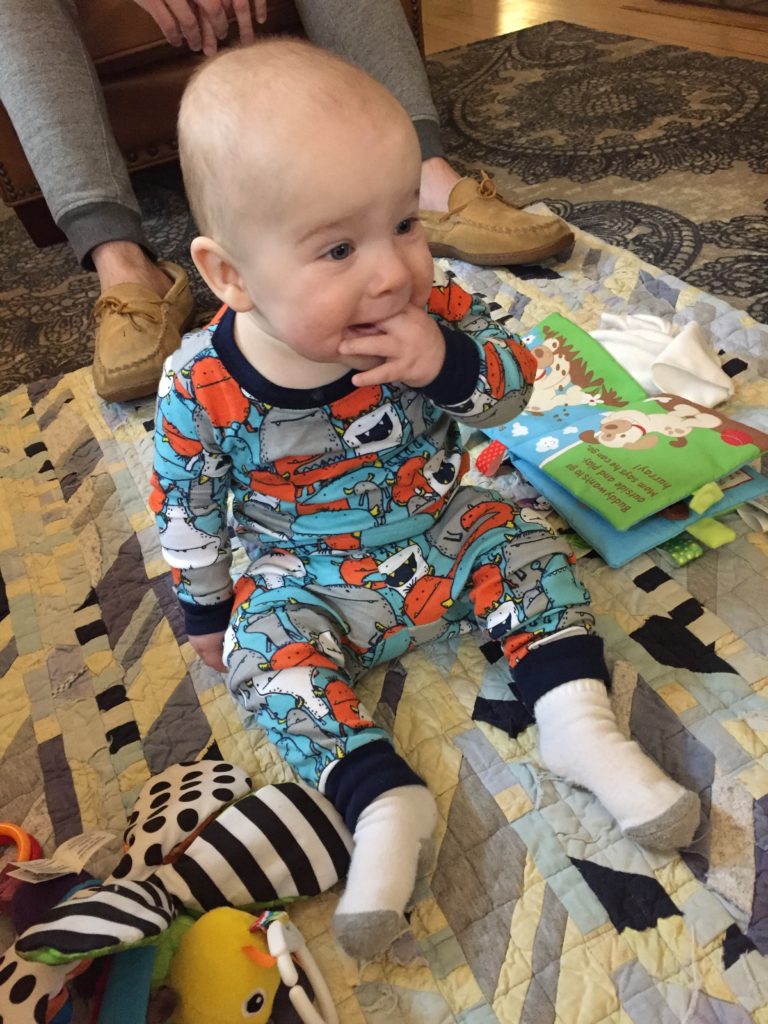 It was so fun to watch Ben figure out how to crawl. It was such a slow and steady progression over the last 6 weeks or so. First he started scooting backwards and then one day after countless days of rocking back and forth on his knees, lunging himself forward and rolling to get to something he figured it out and took his first few crawling steps forward. Even before he started crawling he began to pull himself up on some things around the house. It’s hard to believe the next major milestones will be standing and walking.

Ben continues to be an absolute delight. He is so happy and gives us oodles of smiles. His grins are still toothless and adorable! Ben is a total wiggle worm and full of curiosity. He always wants to see what’s going on.

His personality is so fun and sweet. He’s even becoming a little more cuddly. On a rare occasion he’ll lift his arms up and let you know he wants to be held. That’s the best! And when he snuggles his head into my shoulder I just melt!

Ben has been giggling a lot {mostly at Jackson!} and is generally super smiley. Despite having an ear infection followed quickly by a cold, he had a terrific attitude through it all. No “man colds” for this little boy! 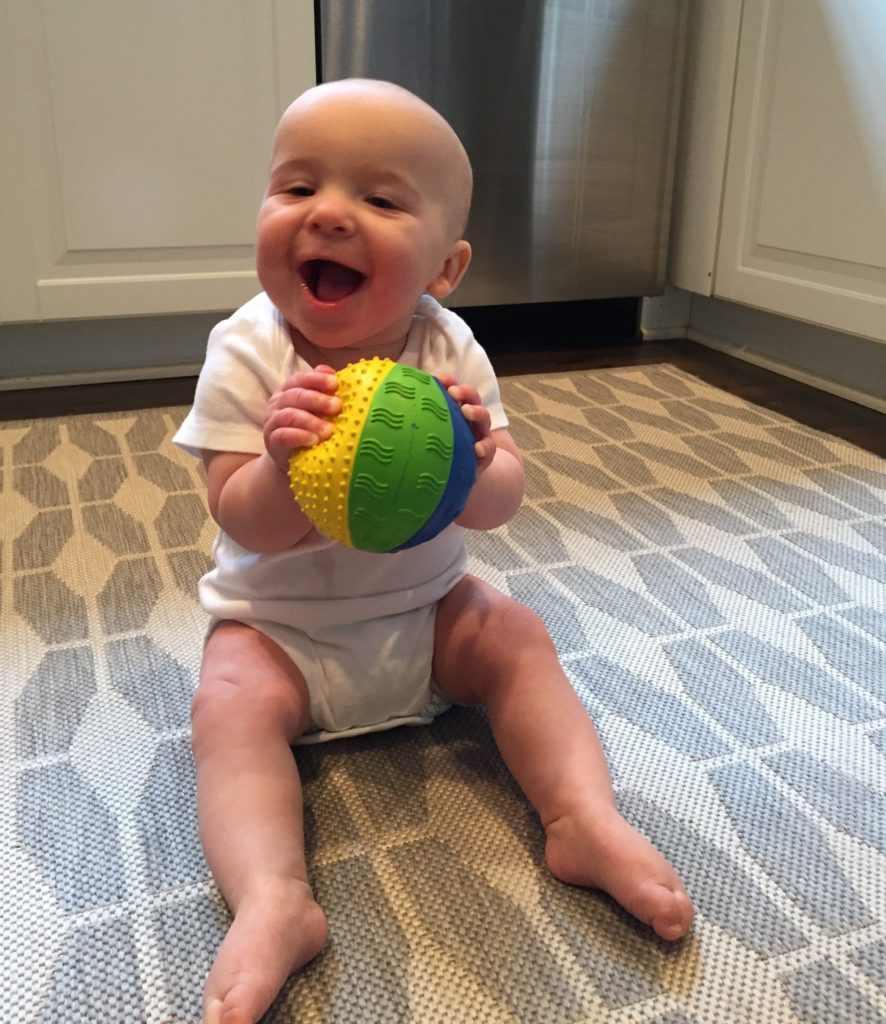 Lately Ben has been eating more food that is not in the form of a puree. Some of his new favorites include pickles, french fries, cheese, chicken and anything with a tomato base. 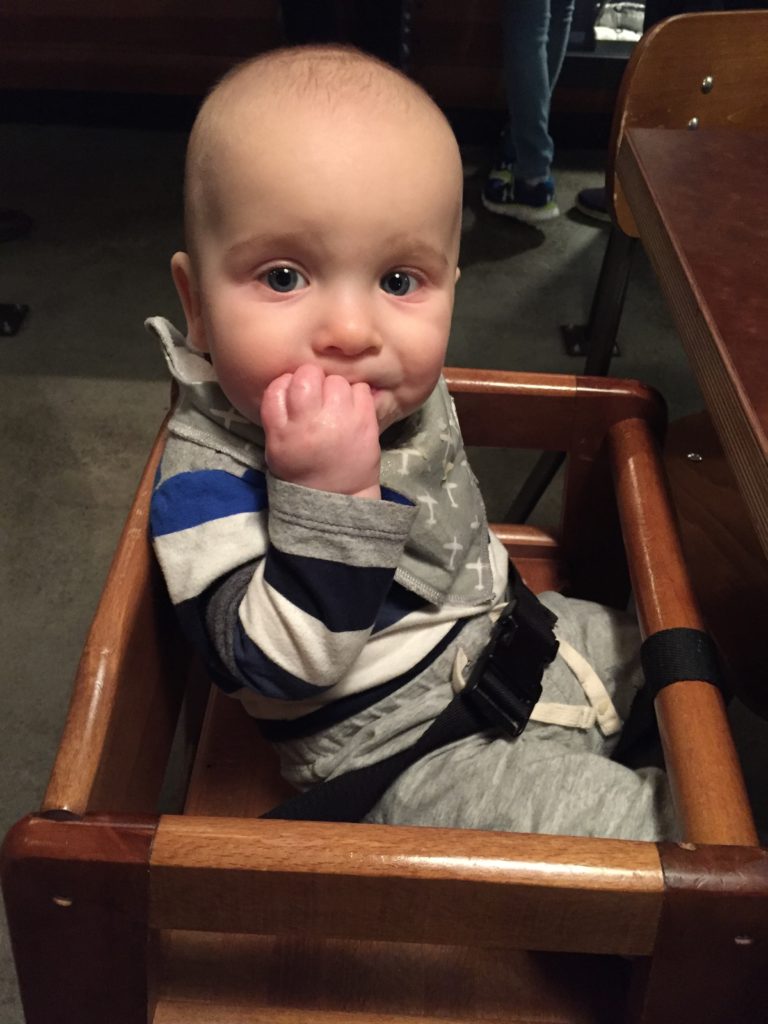 While we were traveling recently I picked up some store bought baby food pouches of pureed food, similar to what we make at home. Turns out, he loved them! I think the consistency is a little bit more thin and smooth than what we do at home. He devours them in about a minute or two! 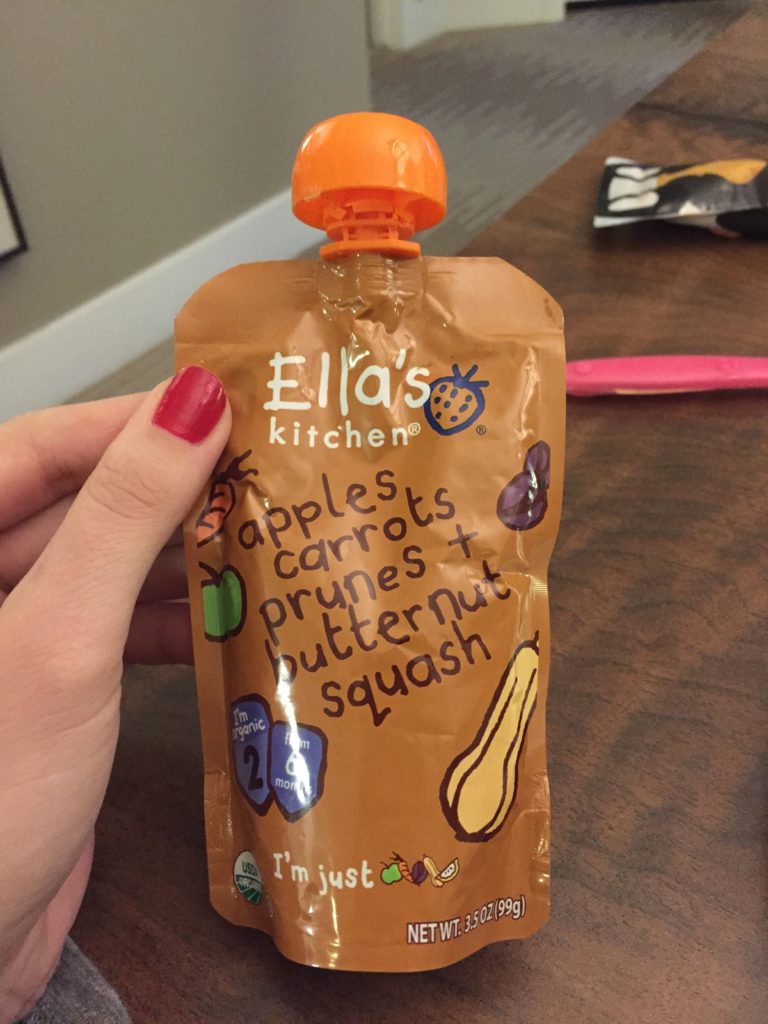 While he was sick and while we were traveling Ben didn’t eat as much solid food as he usually does, which meant that he needed more milk. My supply of milk has been declining over the last couple months so we’ve had to transition him to having a bottle of formula every day. It was a really difficult transition for us all but I’m happy to report that he usually takes the formula without much issue now. 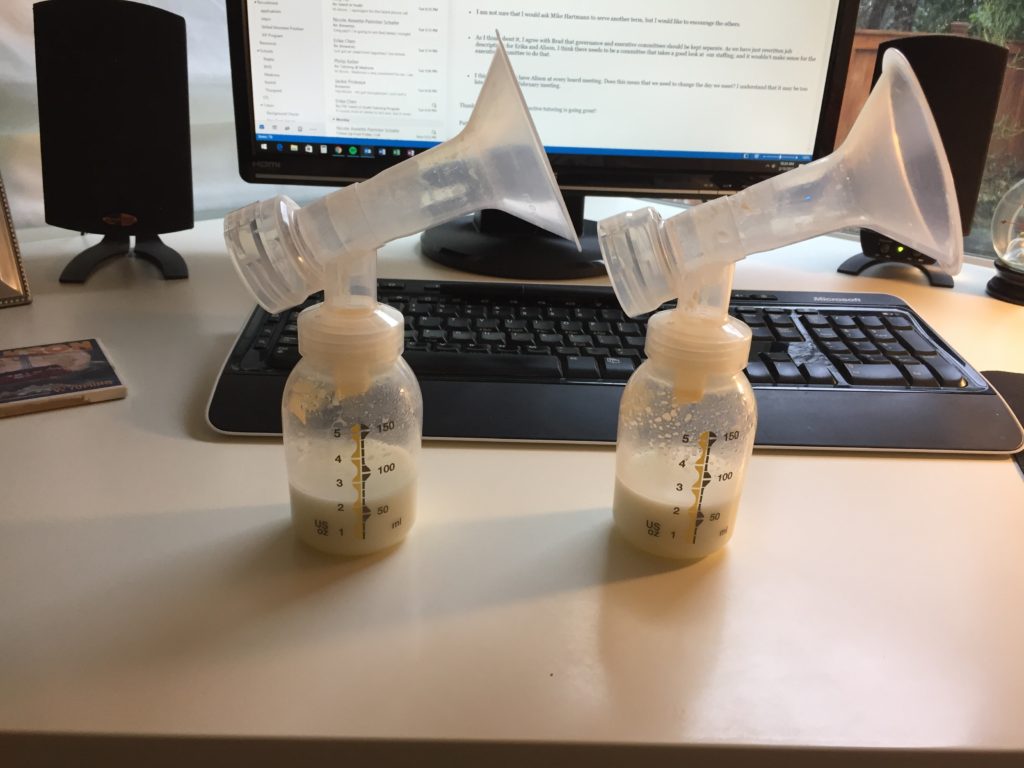 Lately Ben has been really engaged in reading. He has a few favorites, but mostly I try to mix things up a bit. He has quite a library! I’ve been trying to read him more animal books and talk about animal sounds a bit more. I’m thinking that Ben’s first trip to the zoo is going to happen soon. 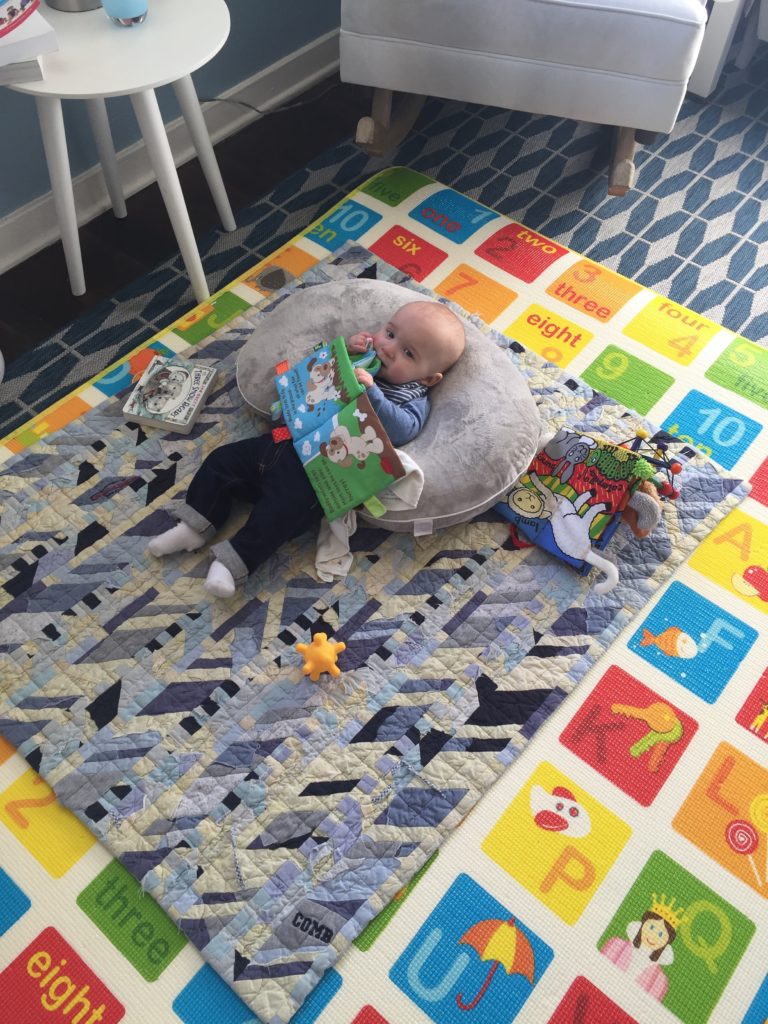 We’ve tried to have a lot of social time for Ben to get to play with other babies. Since he doesn’t go to daycare we’ve got to make up for the social interactions. A couple weeks ago we got together with some of our close friends and their kiddos, all of whom are close to Ben’s age. We love watching Roslyn grow – she’s only 4 weeks older than Ben and they both had IUGR. 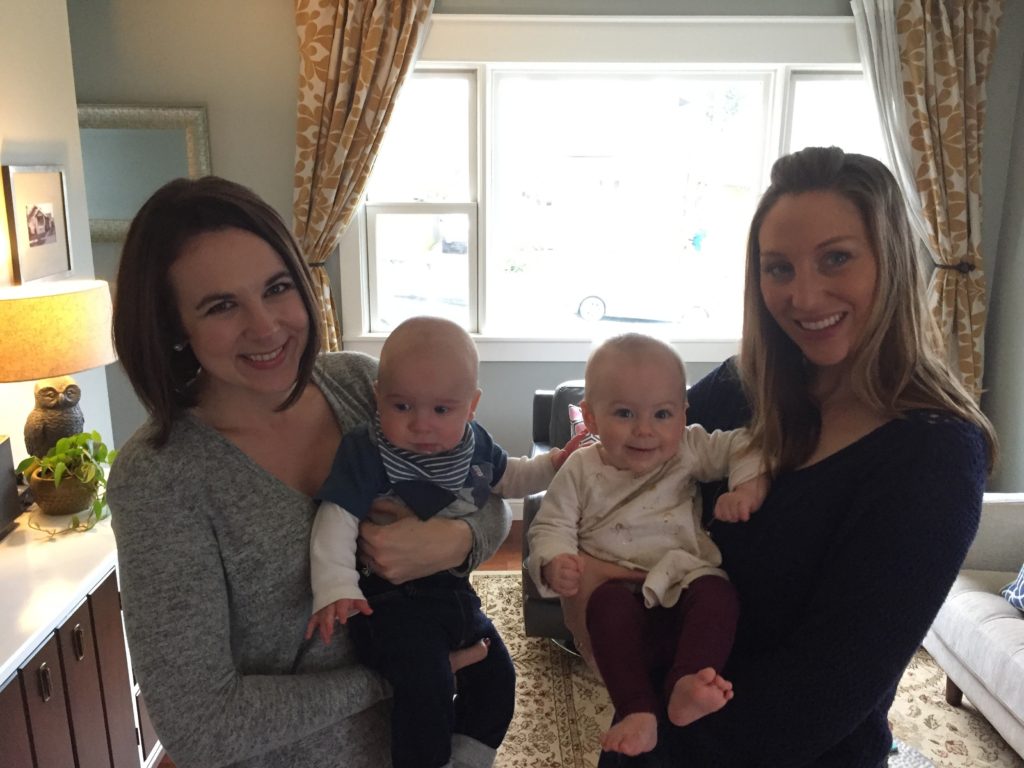 Sleep has been really hit or miss the last month. Since Ben had his first ear infection plus a cold plus a trip this month his sleep has been intermittent. Overall, though, aside from the ear infection, he’s slept pretty well, though. 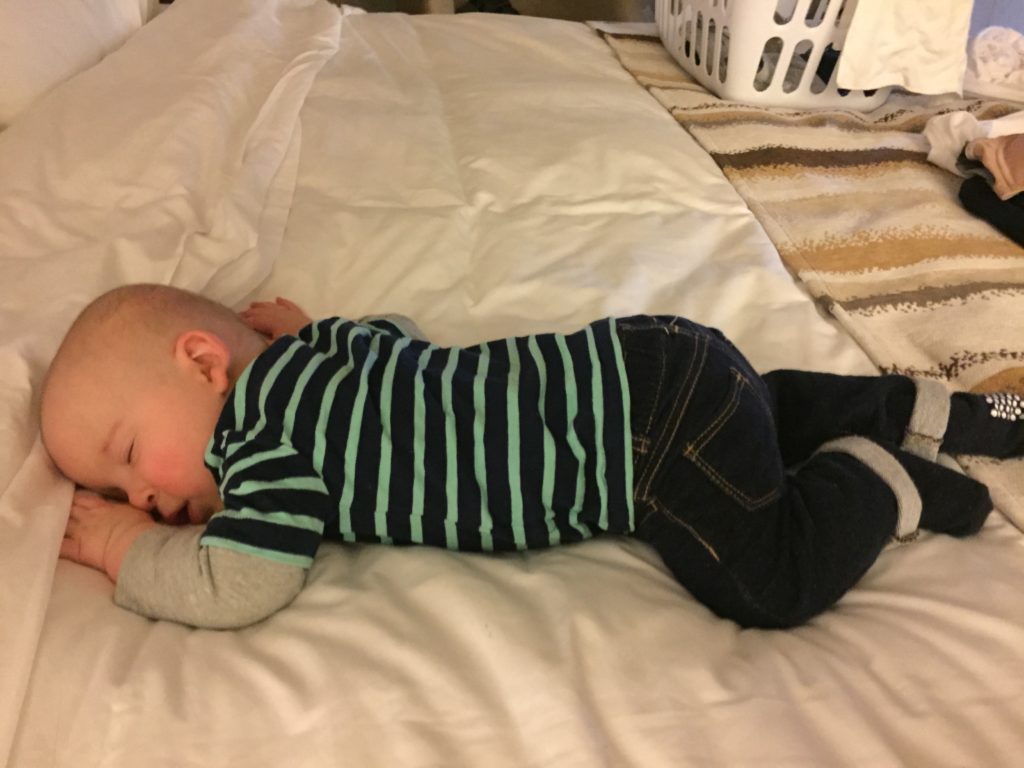 The one and only time Ben has ever fallen asleep in a real bed was one morning on our recent vacation. Alex and I are really cautious when it comes to sleep for Ben so one of us was glued to the side of the bed making sure he was okay while he was snoozing. 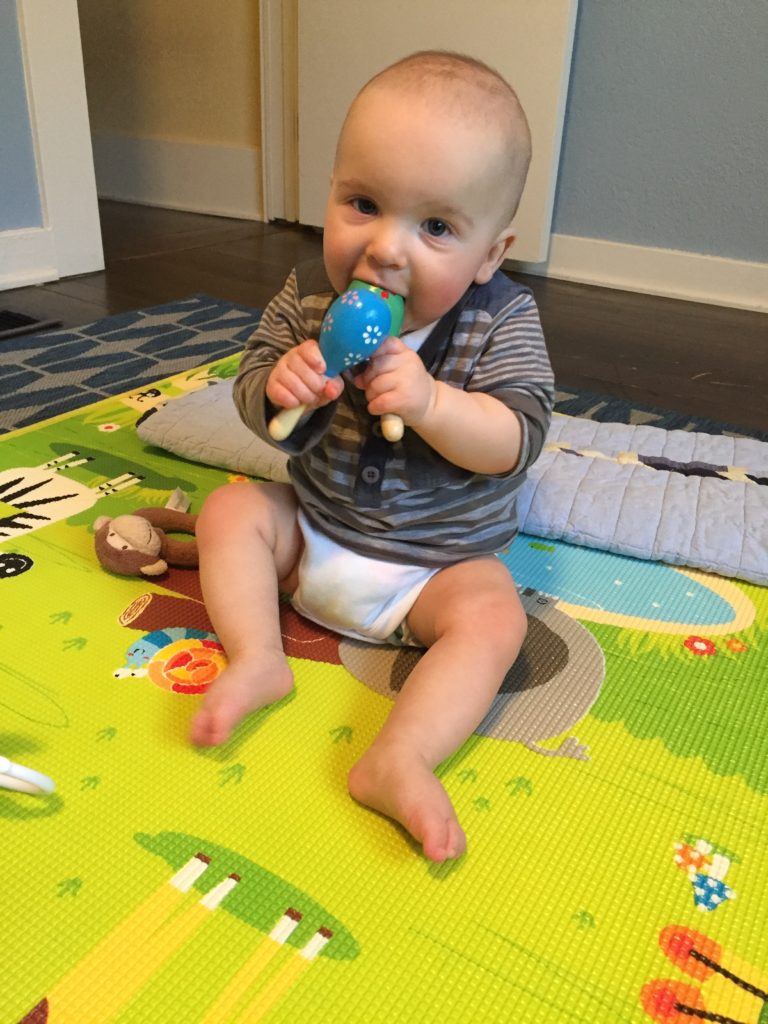 We’ve loved how delightful and fun Ben has been this last month! We’re having a blast with him and can’t wait to see what this next month has in store for us all.