We are rounding the corner towards age 2! It’s sort of funny – for about the first time ever, people are accurately guessing Ben’s age. Parents at the park or random strangers will say “oh, is he almost two?” Typically when someone guesses how old Ben is they are wildly off, but lately it seems like he’s started “looking his age” I guess!? 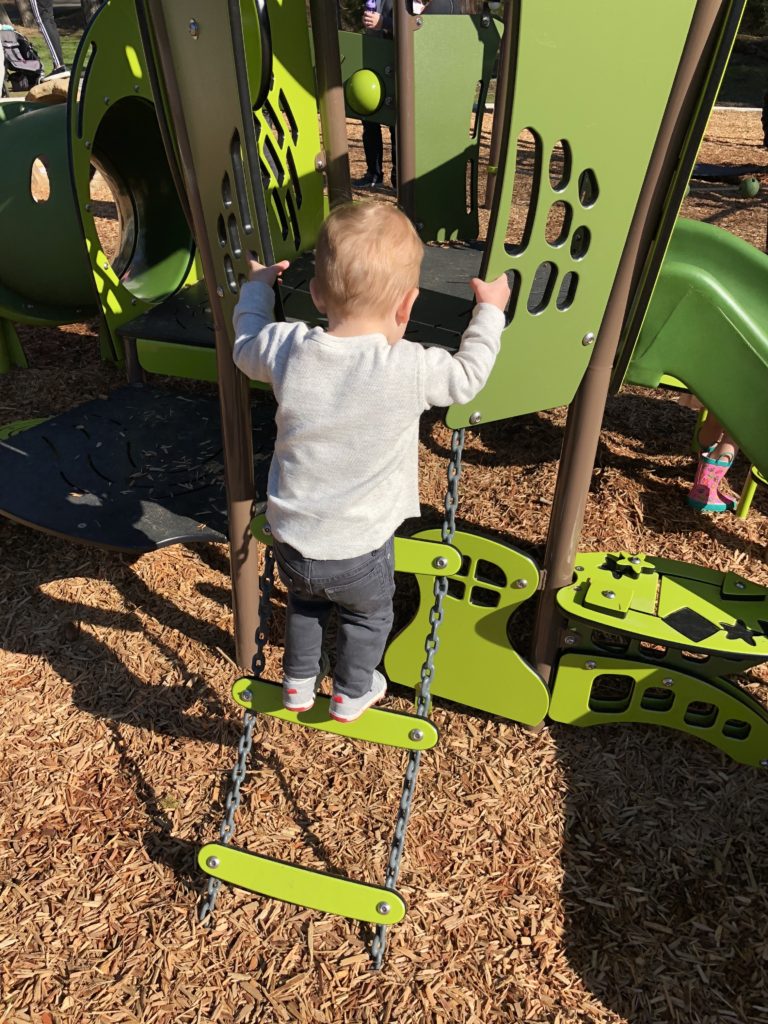 I feel like the theme of Ben’s last month has been fun and talking, talking, talking. Maybe talking will be the theme for all of toddlerhood!? Boundary testing is most definitely another theme lately. We’ve employed the “ok I’m going to count to 5 and then we’re going to be all done with xyz” which has been surprisingly effective so far.

During the last month Ben spent the better part of a week on vacation with Alex and me – we had such a fantastic time just the three of us. Ben has been a dada’s boy a lot more in the last couple of months – it’s been so sweet to see. I just love watching those two together. There are few things more endearing than seeing a dad and his kid having fun and living in the moment. It melts my heart. 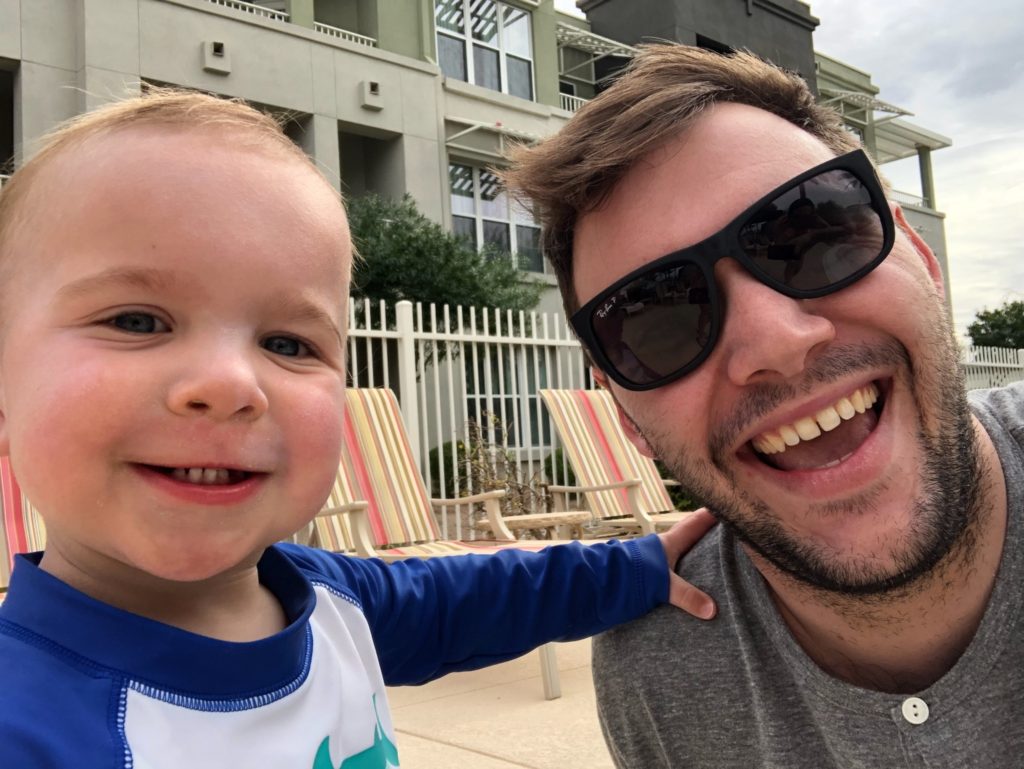 We signed Ben up for swimming lessons, so he’s been able to be a little fish a ton in the last month. He loves jumping in the pool and is working on blowing bubbles, kicking his feet and scooping his hands. Aside from when he’s jumping in the pool he is suuuuper calm in the water. It’s so funny to see that part of his personality come out since he’s basically never calm or sitting still. I think he loves swimming lessons and will regularly talk about “swimming in water” throughout the week. I only wish the water and locker rooms were a tad bit warmer! Brrrrrrr. 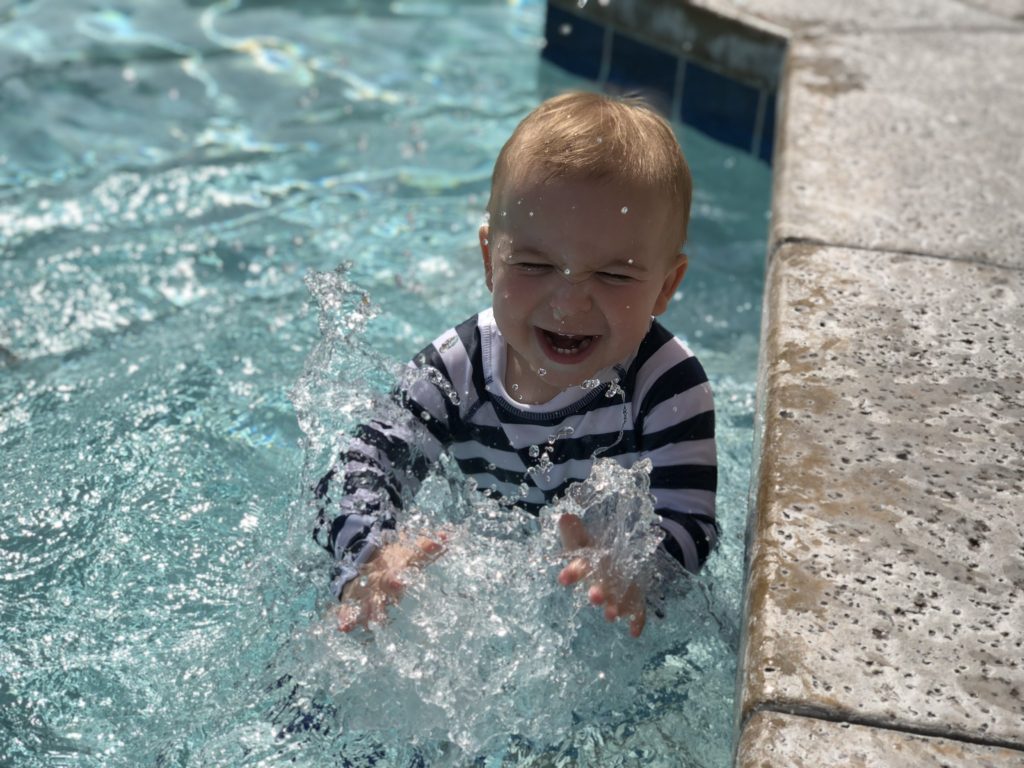 Ben was an early talker, for sure, and in the last month we’ve seen another major leap in his vocabulary, speech and general language development. He’s more forward in talking to strangers and he is stringing together much longer sentences and his overall vocabulary and understanding has exploded. He’s asking questions now, which is basically the coolest thing ever! I can’t get enough of hearing him talk. Some of my favorite things he has started saying are:

Additionally, Ben has started singing songs – multiple verses, too. He sings the Wheels on the Bus, parts of pat-a-cake, parts of Old McDonald. He loooooves music. He’s starting to string together the Spanish ABCs and he’s working on counting to 10 in Spanish {and English, though his Spanish counting is oddly better!}. Colors are basically a lost cause for now. 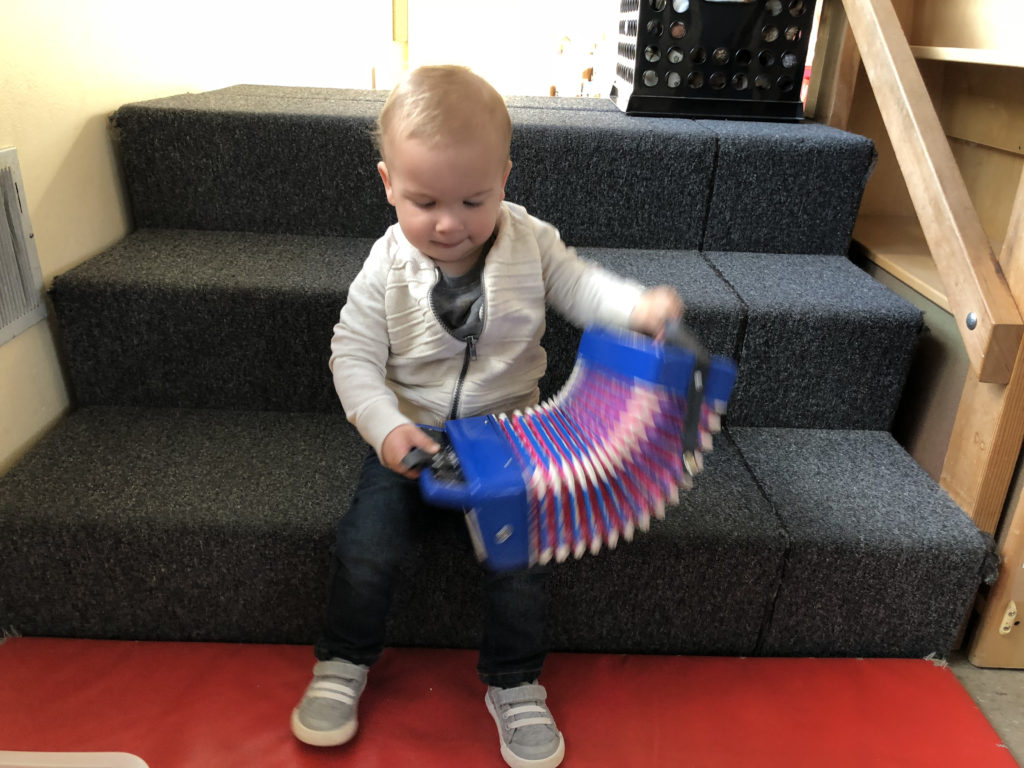 In addition to singing, Ben has become quite the dancer. He’s been a little entertainer for quite a while now, but his new show includes dancing. The other day we were at Starbucks and there was some upbeat music playing and he went over to some girls, said hi and then started dancing for them. It was hysterical! He is such a flirt and really loves to be the center of attention. 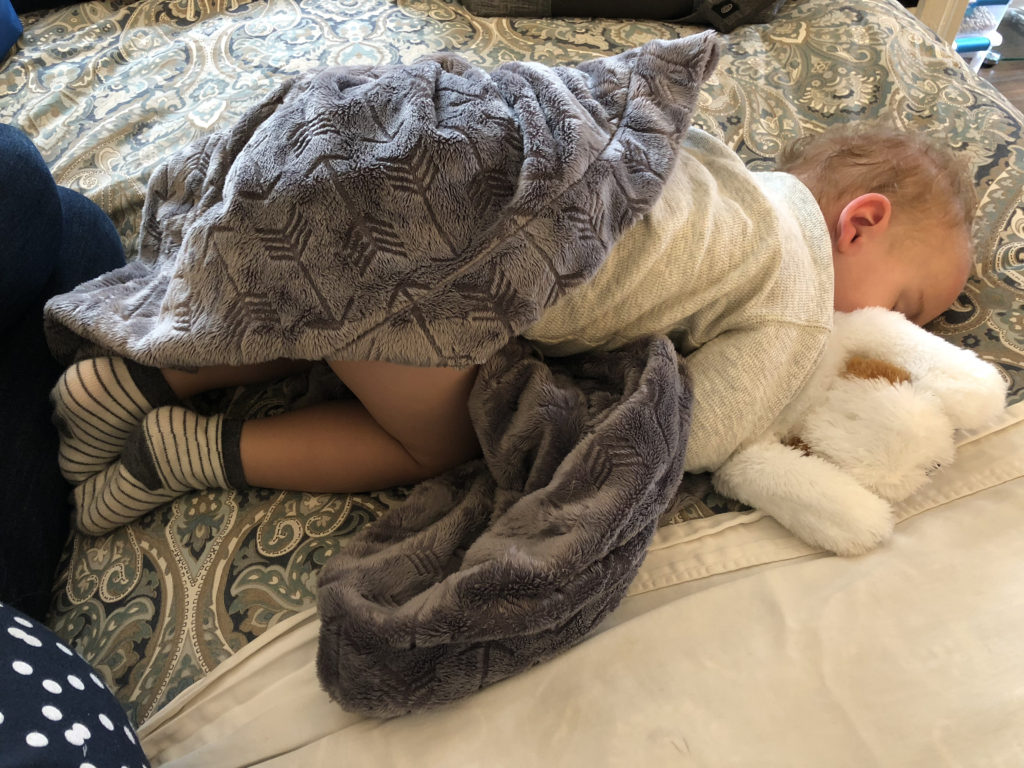 I love watching the associations he makes with things. We were talking about an alligator recently and he “snapped” his arms like an alligator and associated that with a song he sings at school. It’s been interesting seeing him make the association from his three caregivers – we can tell he’s connected some type of parallel between them. 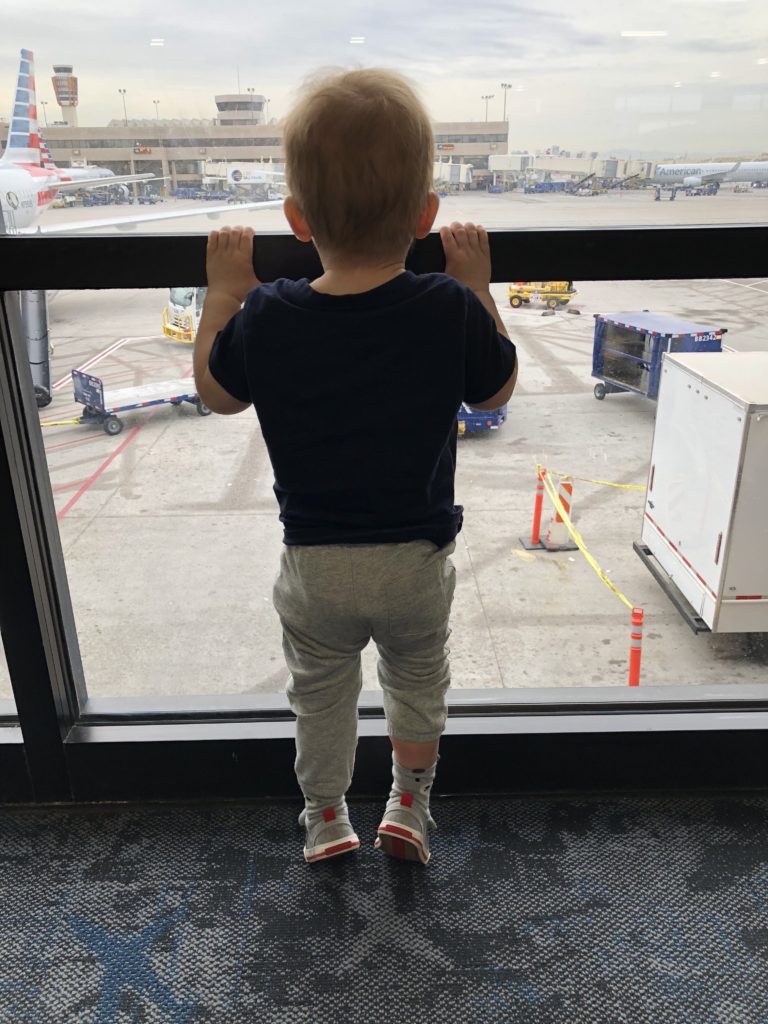 We’re preparing to say “bye bye” to Ben’s high chair. He is protesting it like none other. So far in his 22 months he’s been receptive to our rule that he needs to remain in his chair until everyone is finished eating {trying to instill good manners!}, soooo… we’re working on coming up with some new ideas, likely including a booster or a cool kids chair of some sort. 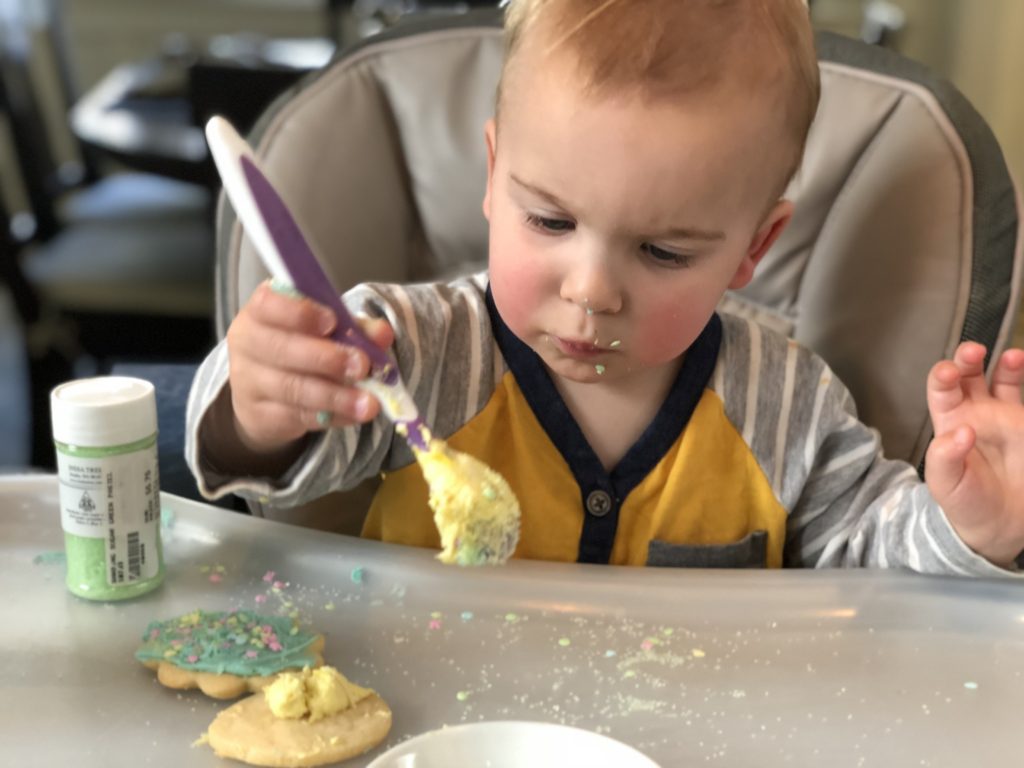 Another thing we are working on is re-setting Ben’s naps. The last three months Ben has been a terribly inconsistent napper. Two hours is an ideal naptime for Ben – lately, he’s been waking up very upset, clearly not ready to be awake, after exactly an hour. We’re establishing some new naptime habits and using our handy dandy Hatch light to help Ben to know when it’s okay to wake up from his nap {hint: the light turns green!}. So far the first week is going well and he’s been much more calm when he wakes up. 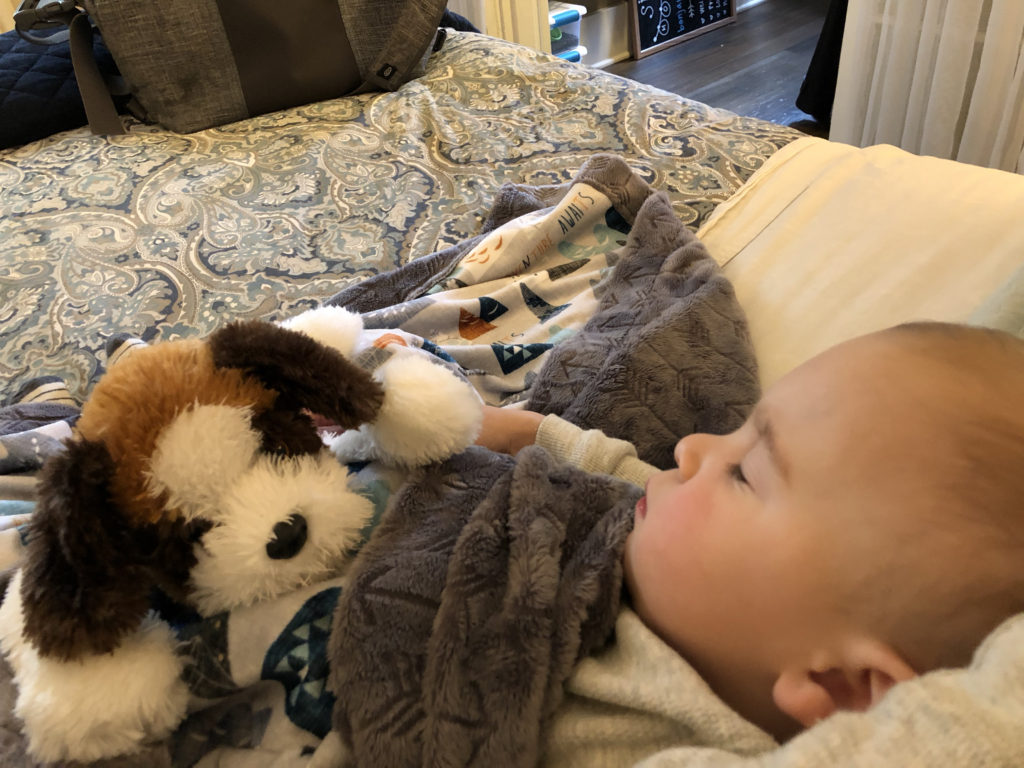 We are so excited about the recent change we’ve made to our childcare situation – we are feeling very positive about Ben’s new au pair and the care he is receiving throughout the day. We’re hoping Ben will continue to make leaps and bounds as we move closer and closer to his second birthday.