My friend from Minnesota, Sarah, and her husband, Mike, flew out to Portland and we spent the weekend together in McMinnville, Oregon, right in the heart of the Willamette Valley. We rented an adorable house for the weekend – this house is one of my favorite vacation rentals to date. It was really roomy, had a ton of charm and a fantastic backyard for us to lounge in and for Jackson to run around. The location was just a block off the main drag, or shall I say “the gut” of the town. During our stay in McMinnville, the locals had an event called “Cruise the Gut” where they drove their vintage, sporty, loud or just regular cars down the “gut” of the town. 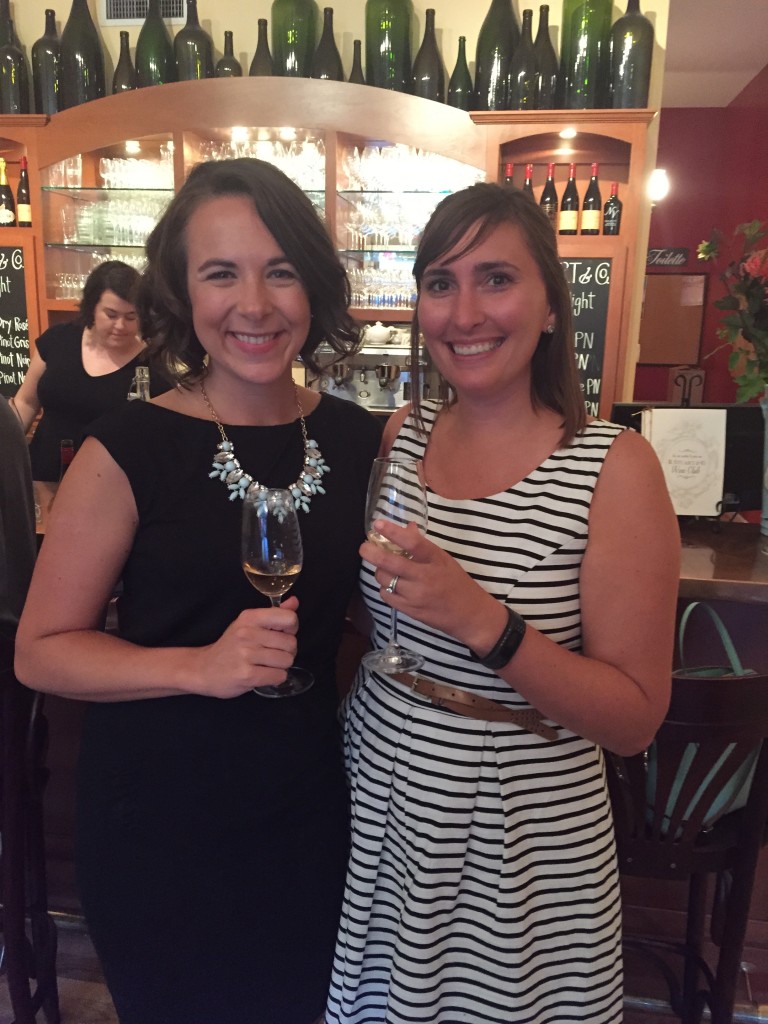 The town was really cute and had several restaurants, wine tasting rooms and a few little shops. We spent our Friday evening checking out the tasting rooms before settling in at La Rambla, a Spanish restaurant, for dinner.

As a way to break up the wine drinking, we headed to Cannon Beach on Saturday for a full-day excursion. Cannon Beach is on the Oregon Coast and was about a 2 hour drive away from where we were staying. We weren’t aware of this initially, but similar to the fires in Washington, Oregon was experiencing several wildfires during our stay. The skies were extremely hazy on Saturday and Sunday. 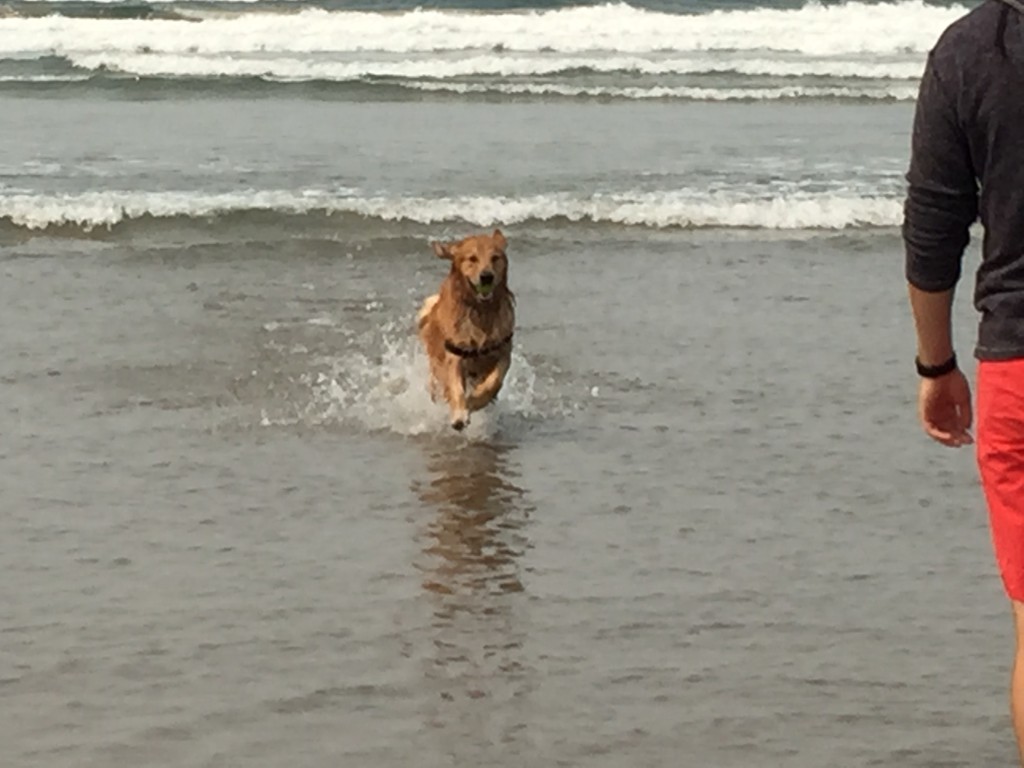 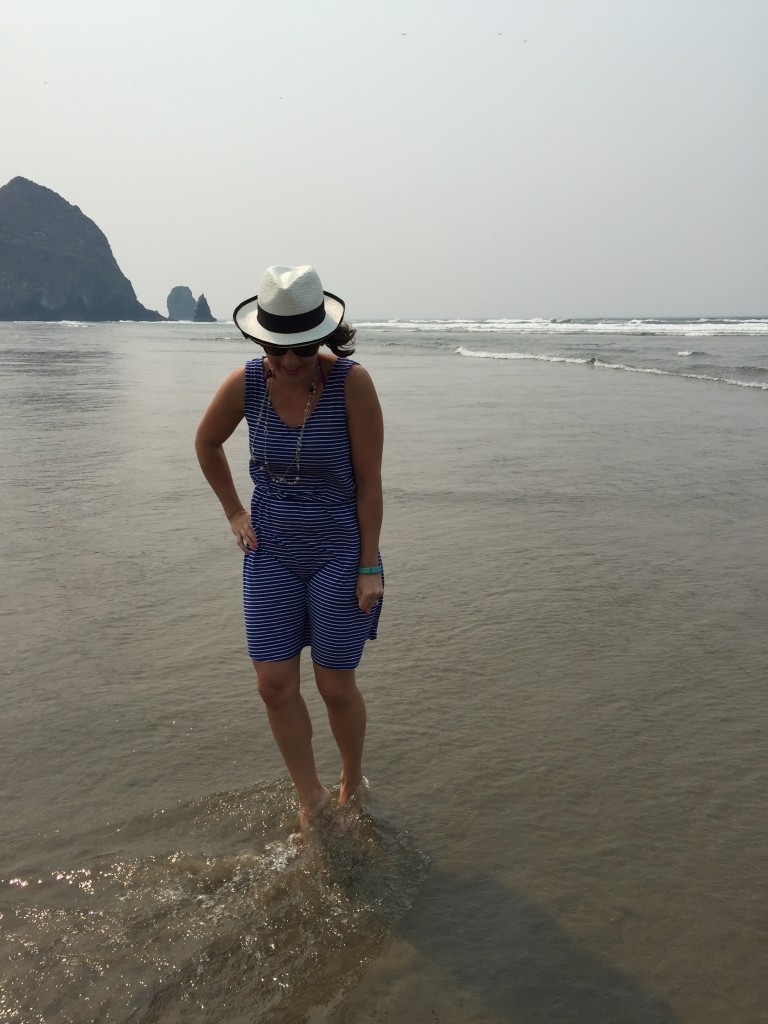 Cannon Beach was different than I expected. Haystack Rock, the infamous rock jutting out from the beach, was at least three times as large as I imagined. The beach itself was super sandy and the sand was so soft! Most/all of the beaches on the Washington coast are completely covered in rocks. While I knew the beach was enormous, the town was a bit bigger than I realized it would be. There were tons of shops, restaurants, cafes and beach houses. It was really Cape Cod-esque but with a little Pacific Northwest flare. 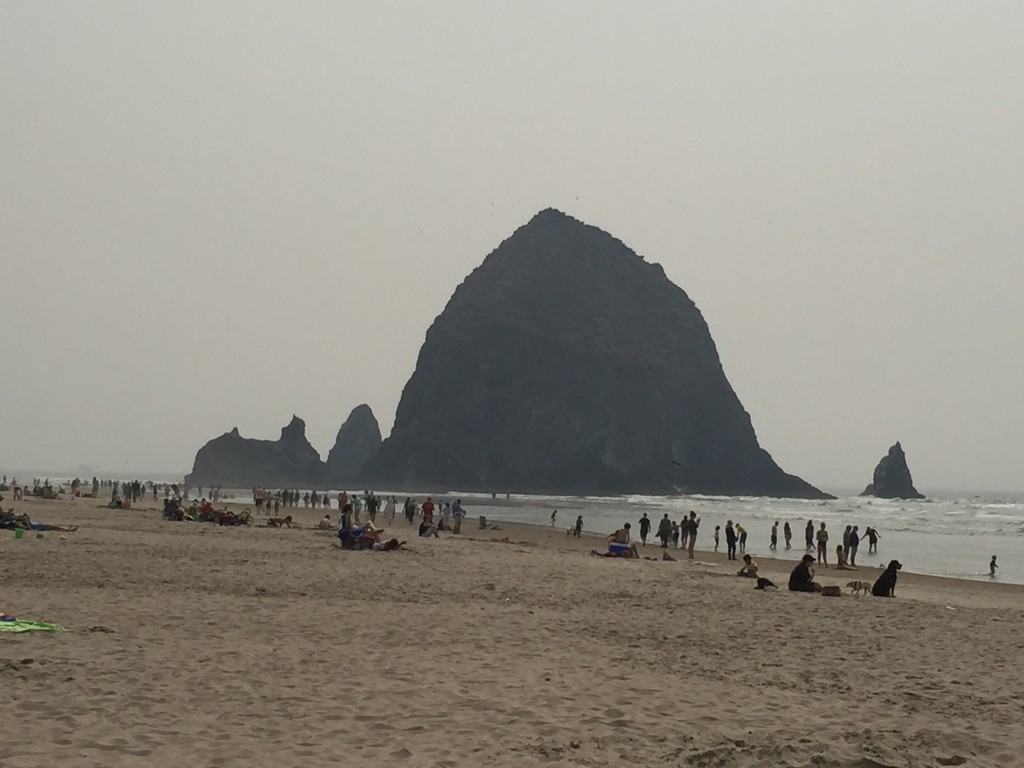 Our next big adventure was Sunday’s excursion to Dundee Hills, one of the AVAs {American Viticulture Area} in the Willamette Valley. The Willamette Valley looks a lot different than the Washington wine country areas we’ve been to previously {Yakima and Walla Walla areas}. It’s much less deserty-feeling in Oregon, there are more trees, both coniferous and deciduous, and more rolling hills. The haze from the wildfires really prohibited our view – a few of the wineries boast views out to Mount Hood, which we didn’t get to enjoy on our trip. 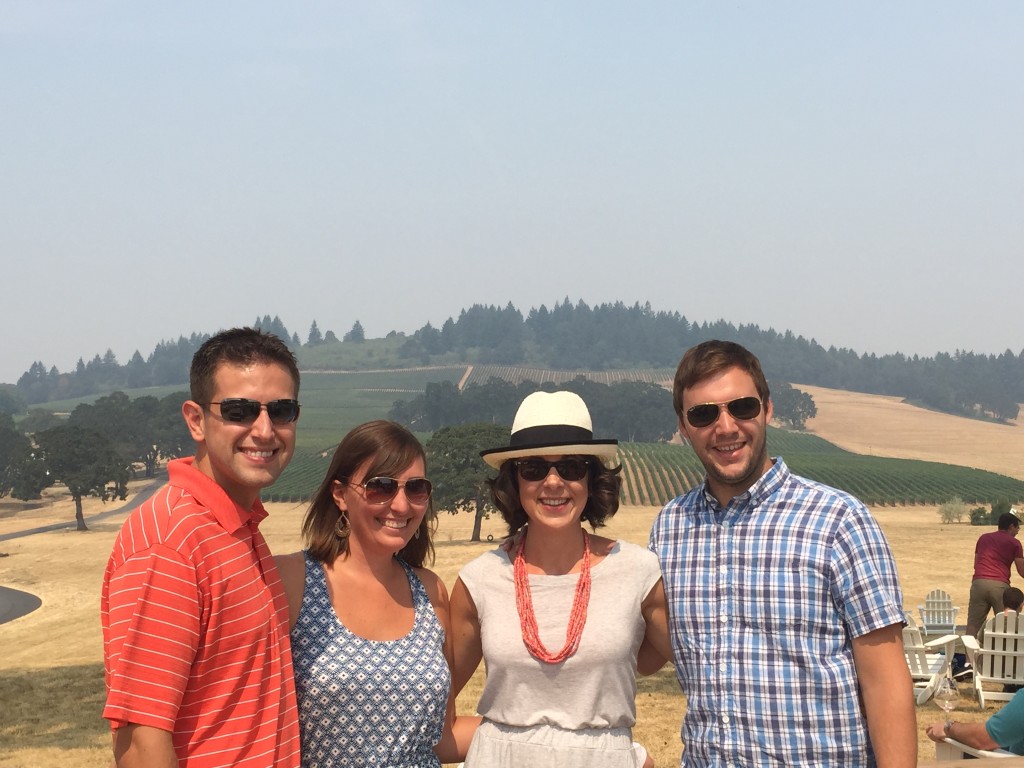 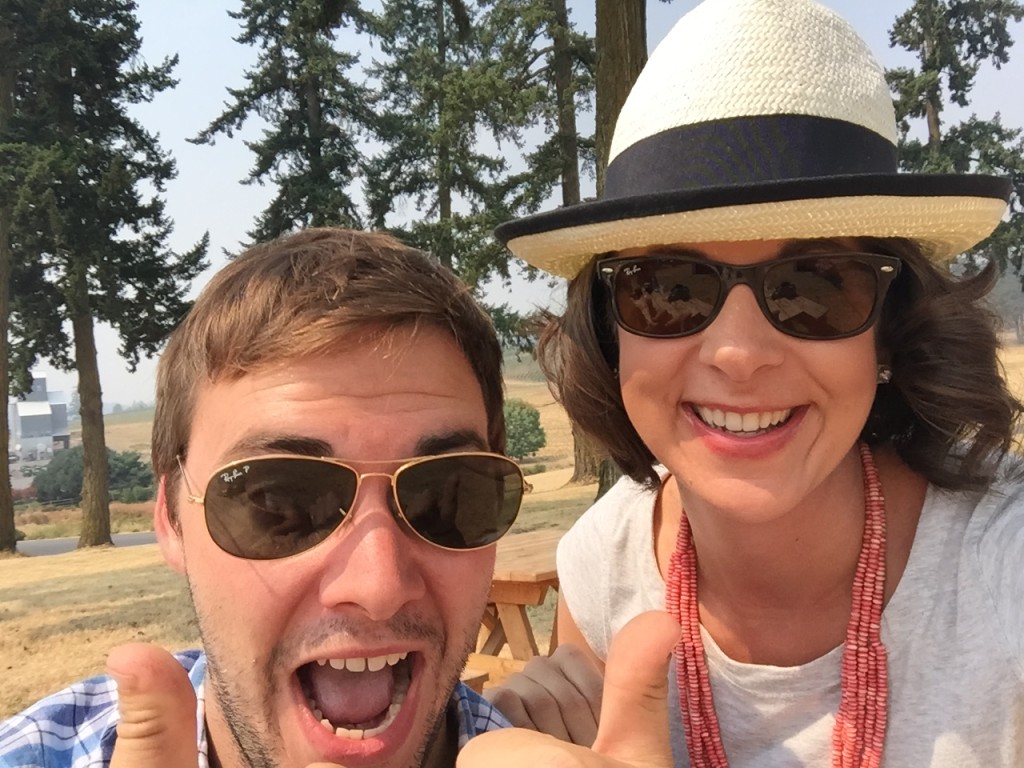 Each of the four wineries we stopped at on Sunday offered a different experience. We all shared similar sentiments and seemed to favor Purple Hands for wine and service, Stoller for view, Sokol Blosser for space and ambiance and White Rose for overall wine quality.

Another thing I was surprised about with our Willamette Valley wine tour was just how much pinot noir we would drink. I guess I had it in my mind that our experience would be very similar to our previous experiences in Washington, where there is quite a variety of wine varietals, but honestly, the only red wine we drank was pinot noir! I like pinots, but they’re not a wine I tend to favor when presented a choice. And similarly, the white grape varietal of choice was a chardonnay, which tends to be my least favorite. We did have a couple chardonnays that I enjoyed; however. 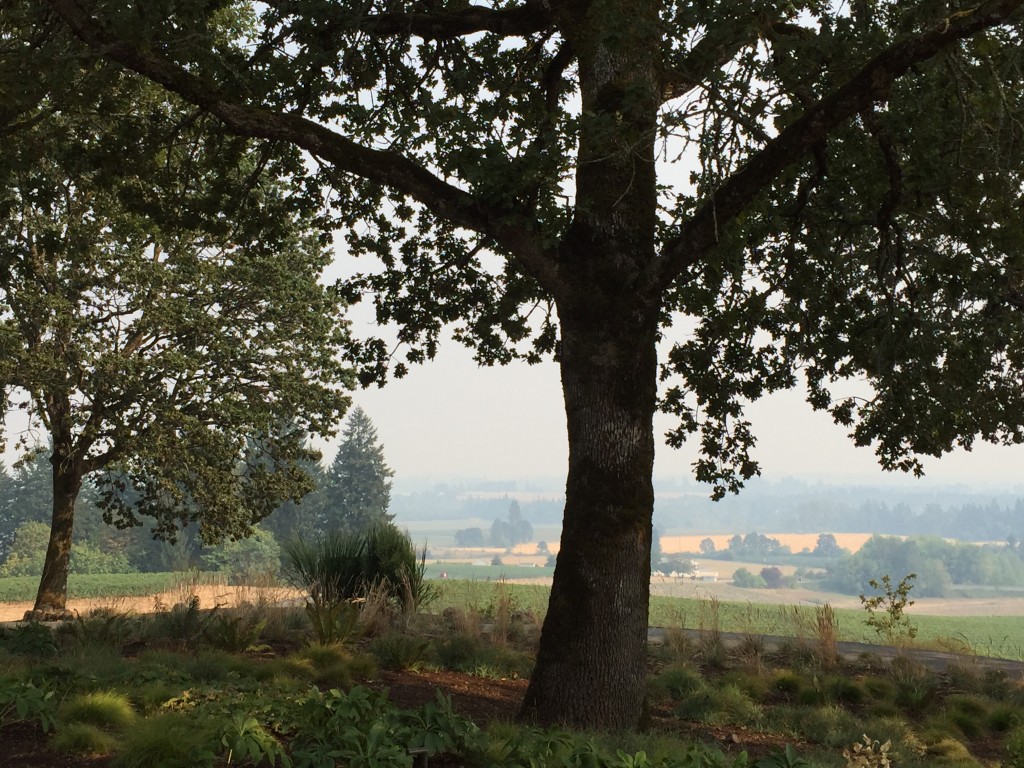 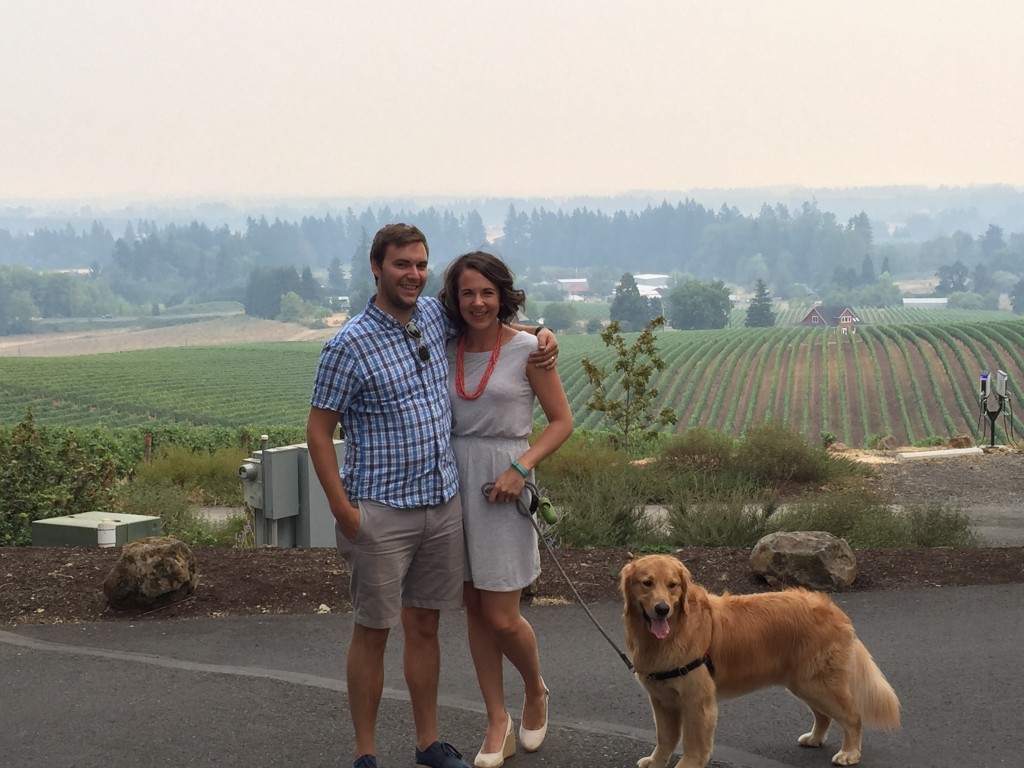 We had one more winery on our list for Monday, our last day in Oregon. This was a winery I was particularly excited about because it was a more private, intimate tasting, and I had read reviews on Trip Advisor that people agreed it was the best wine tasting experience they had ever had. We pulled up to Soter Vineyards just before our reservation time and were already blown away by how beautiful the tasting room and the grounds were. That was even before we were greeted by our host with a glass of amazing rose – our group favorite of the trip.

Being a big wine lover, I really enjoyed our wine tour and getting to explore this new region we had never been to before. That said, though, one of my favorite parts of our trip was the time we spent in the backyard of the home we stayed at. The backyard was fantastic and the temperatures were so mild that we stayed warm late into the evening. We used that time to catch up and just chat about life. It was really nice to have several days to spend with Sarah and Mike. I think those are the best get-togethers – the ones where you take a vacation and get to spend that much quality time together. 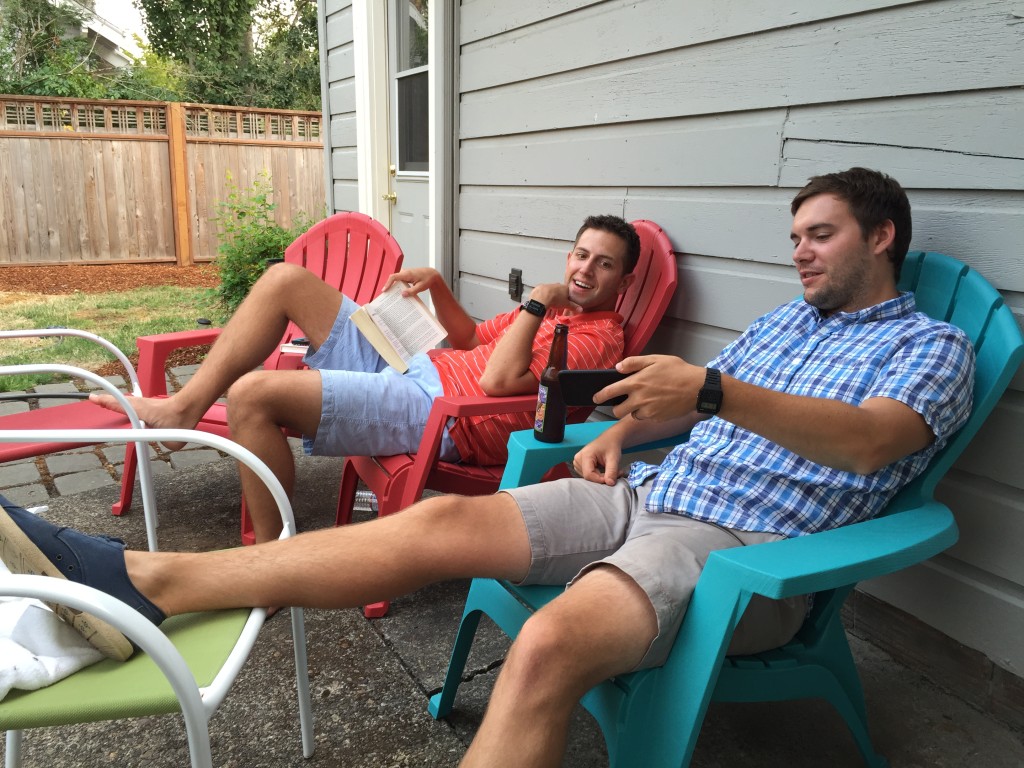 Sarah and I, who have been best friends since high school and served the role of each others’ maid of honor, typically talk several times each day, whether by text, email or phone, and we always know what’s going on with each other even though we only see each other a couple times a year. Technology has been so instrumental in our long-distance friendship. With those visits to Minnesota, I typically only get a few hours with her, so I really enjoyed the duration of time we got to have together. Hopefully we can take another trip soon 🙂