Alex has been going up to work in Vancouver lately. One of his trips happened to end on a Friday, so Ben and I decided to head north and join him for a quick International trip. 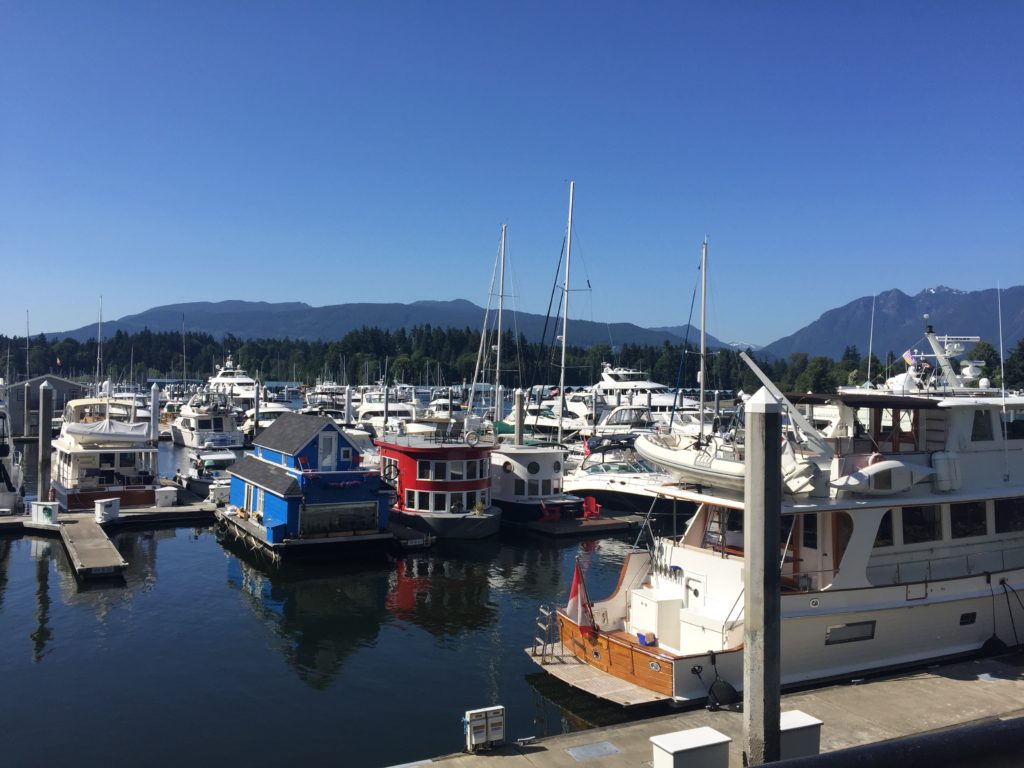 Alex and I both love, love, love Vancouver – it feels like a big, urban city, yet intimate. Surprisingly, the population of Vancouver is very similar to Seattle {about 650,000}, but it actually feels like a big city. We both agreed that this is one of the only other cities we think we would live in {and boy would that be incredible!}. I think it has to do with the parallels to Seattle and of course its proximity to Whistler. 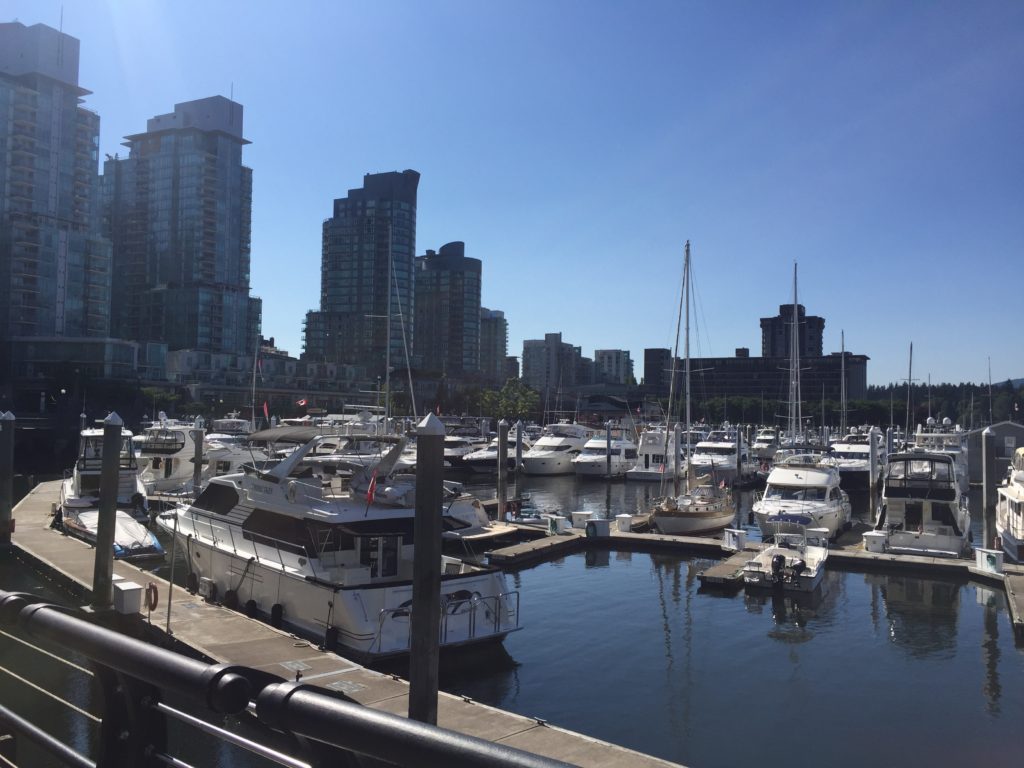 This trip we stayed on the waterfront at the Fairmont Waterfront, right across the harbor from Stanley Park {Vancouver’s version of Central Park}. I loved that location – it was close to shopping, restaurants, the Gastown neighborhood, Stanley Park and, obviously, the water. 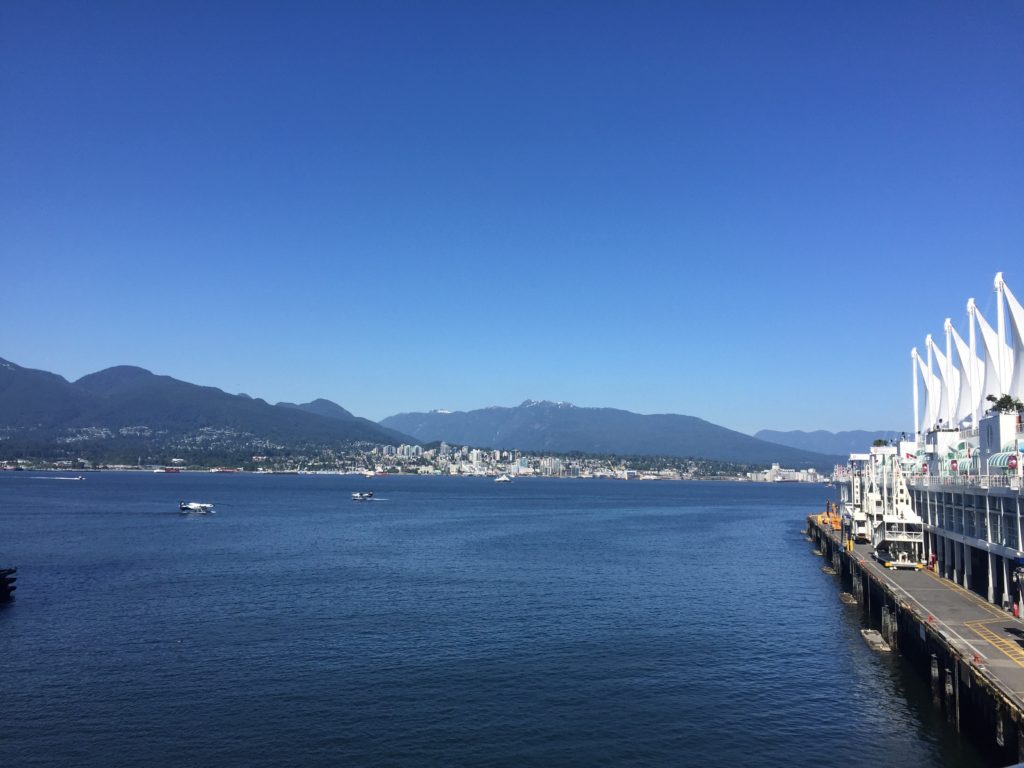 Ben and I were on our own for most of the trip. I got very organized and packed up in advance and then just in time for Ben’s morning nap, we were on the road. My one regret: not stopping for coffee on our way out of town!

Similarly to most kids, or so I’ve heard, Ben is not particularly fond of being strapped into his car seat for any length of time, let alone 2-3 hours. For our drive to Vancouver, Ben was testing out his new car seat for the first time. It seemed like he may have been more comfortable, which helped make it a successful drive. 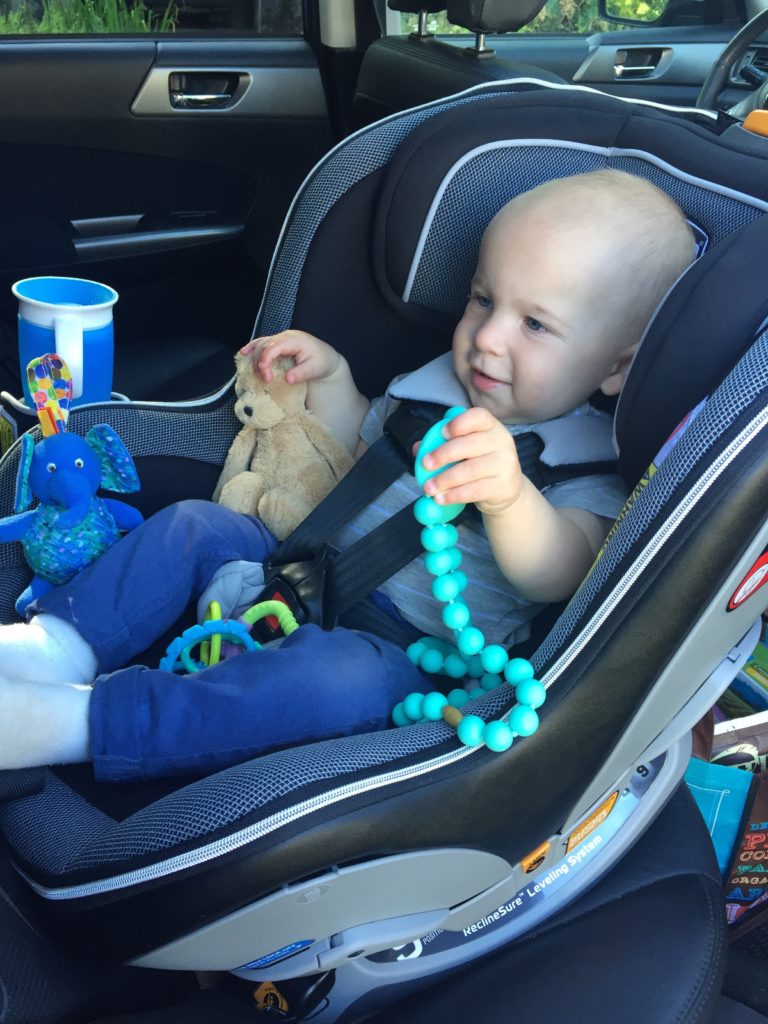 Additionally, I opted to pack a little “car bag” of fun toys I could just throw to him in the car seat if he got antsy and much to my surprise, he didn’t even need any of them! I loved my idea, nonetheless, and will certainly plan on doing that for our next car trip.

Another new idea I had was to stop at a playground for a picnic lunch and to stretch our legs. While I was waiting in line to cross the border I searched for a nearby playground and ended up finding Redwood Park in Surrey, the town on the other side of the border. This park was AWESOME. Ben was too little for most of the equipment but he sat on the grass watching all of the big kids play and loved practicing walking {while holding my hand} all over the park. 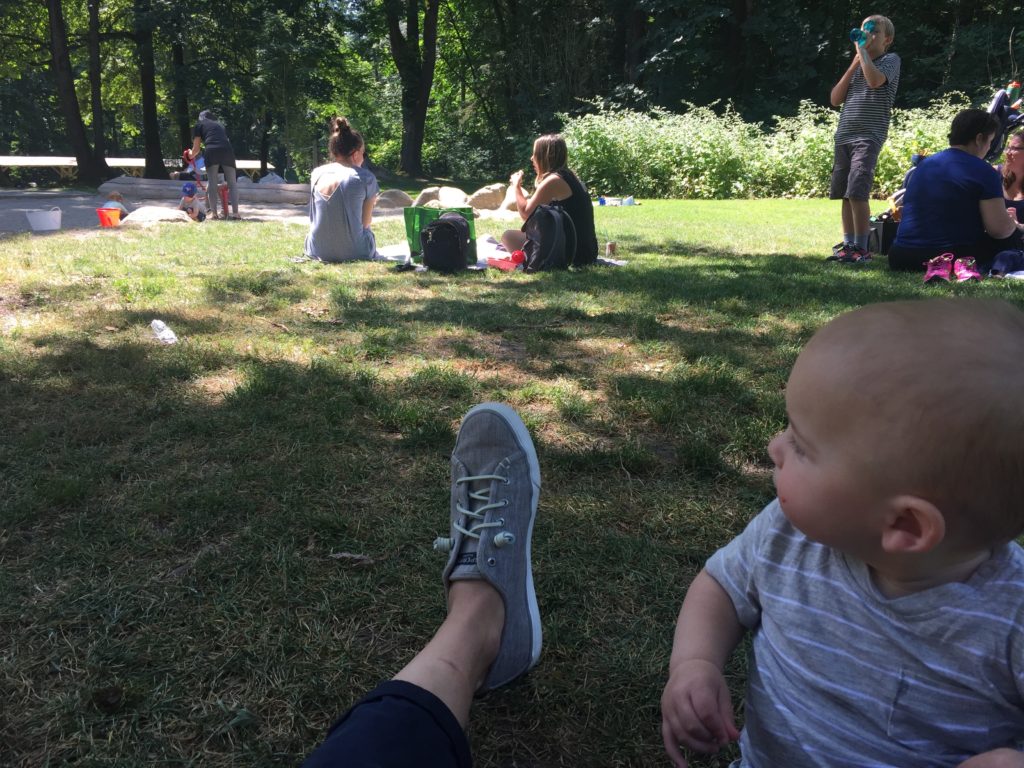 Edina had packed us a little bento box lunch the day before and Ben loved his peanut butter and jelly sandwich. When did my baby become a little boy!?!?!

Side note: one of the first things I noticed at the park was how nicely the other moms were dressed! Boy was I glad I opted against the cute and comfy athleisure get-up I had initially considered wearing. I saw ZERO leggings – you read that right – ZERO leggings – at the park! This theme carried through our trip – the folks up in Vancouver sure know how to pull themselves together. 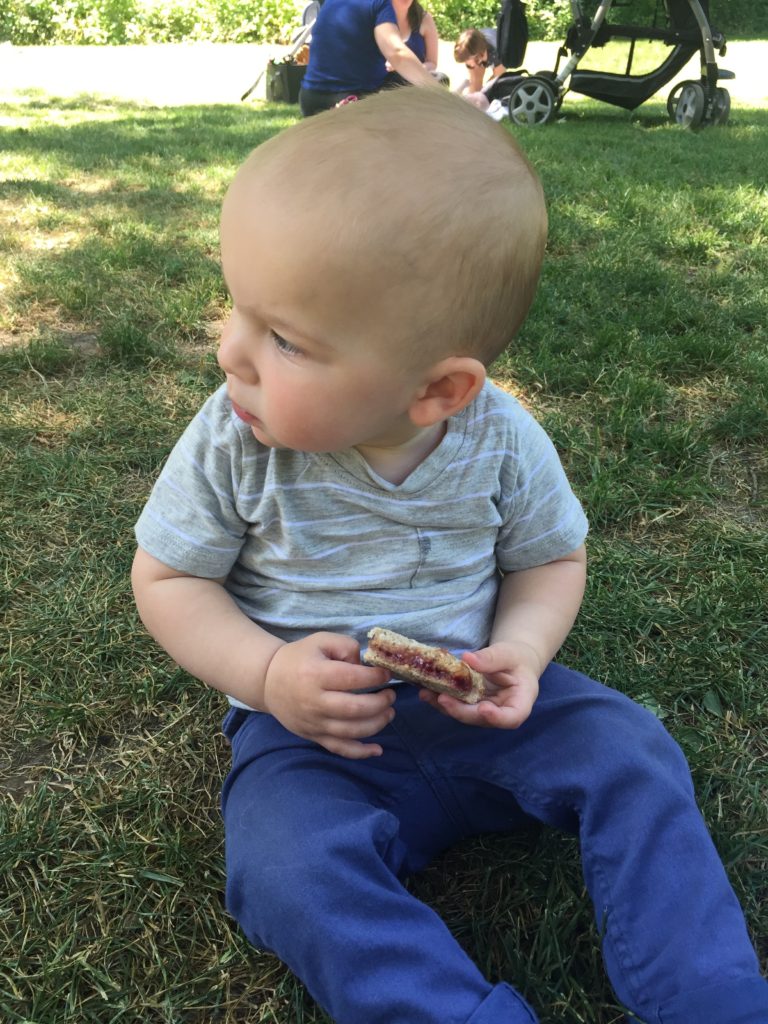 Our first stop after getting checked into our hotel in Vancouver was the pool! This pool was fabulous and overlooked Coal Harbour with the Coast Mountains in the background. It was absolutely stunning and the weather was perfect! 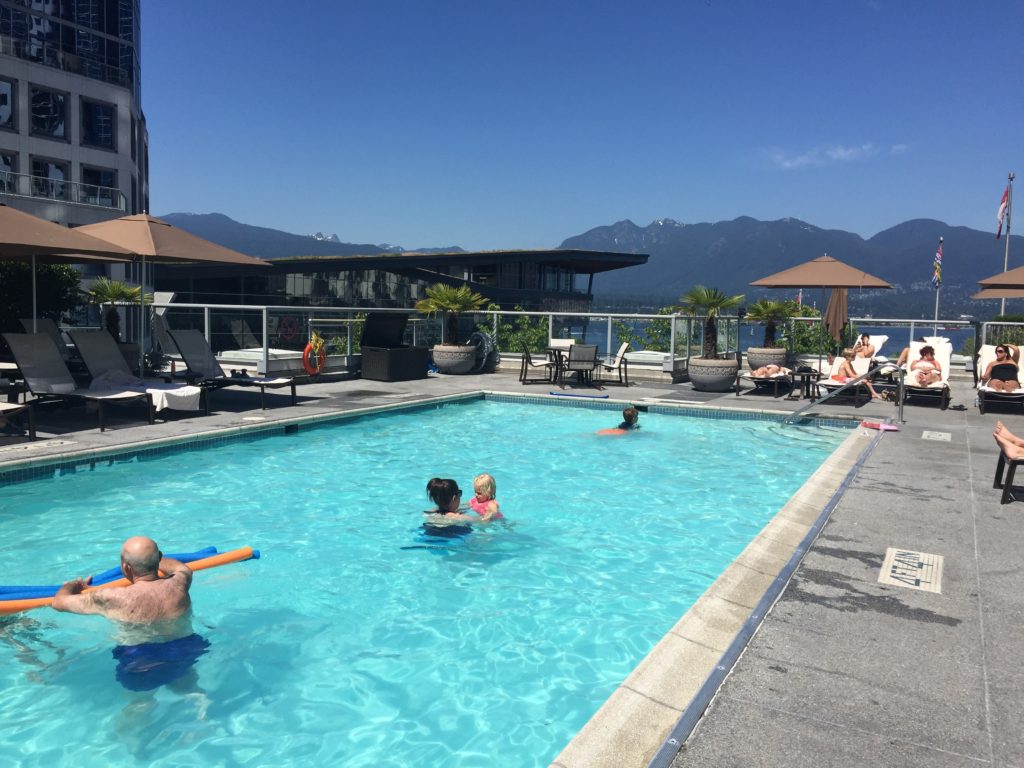 Ben LOVED swimming. We have a little swim float that he sits in and he was happily kicking and splashing as we cruised around the pool. Everyone was getting such a kick out of his adorable giggles and cheesy grin.

We had such a fun day together. We strolled along the waterfront and watched the seaplanes take off, gawked at the cruisers {we stayed across the street from the cruise terminal} and practiced waving at strangers. We even had some gelato 🙂 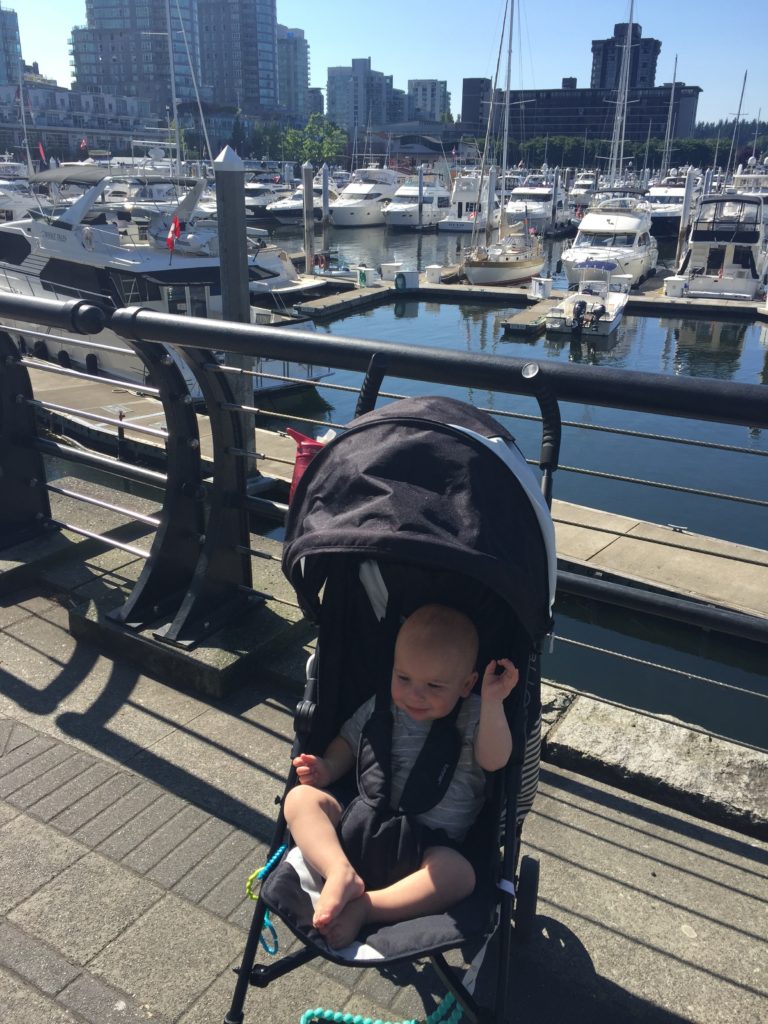 In an ideal hotel set-up, we’d have a separate bedroom for sleeping children, along with a refrigerator that can accommodate bottles and snacks. A super perk would be a high chair with a tray, but we’d compromise with a high chair + a table that the high chair can pull up to, thus allowing the child to feed himself. 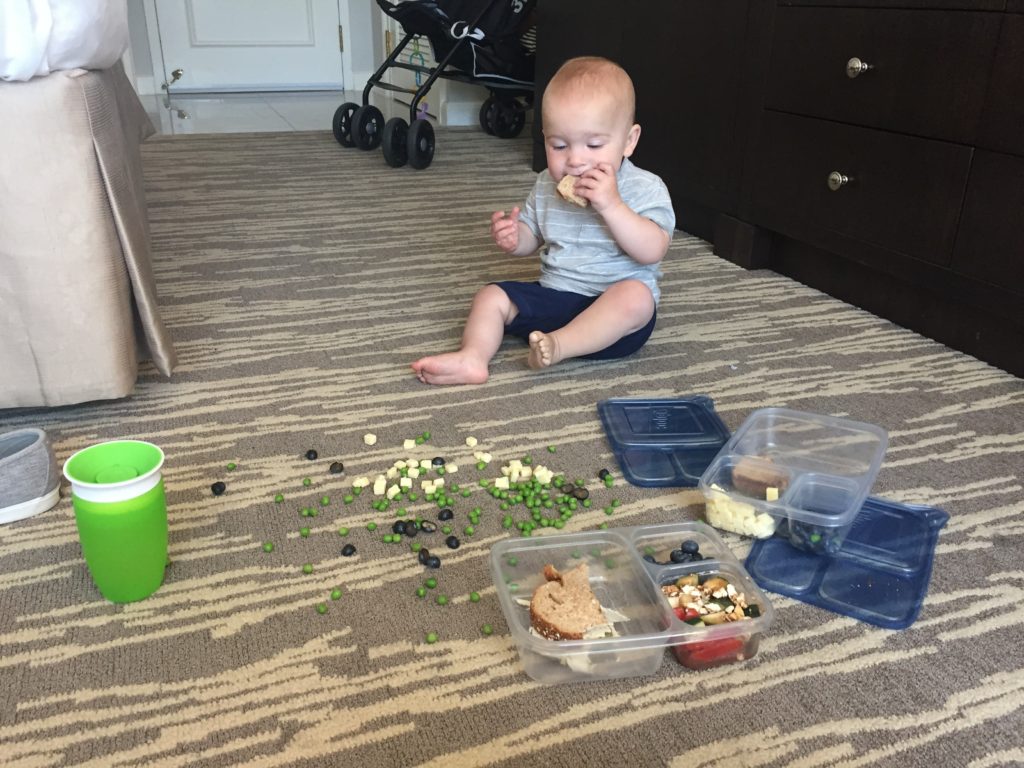 Given that we had no good high chair set up {after we finished dinner, the hotel staff brought up a standard restaurant high chair but there was no good table to pull it up to} we had several picnics on the floor. It was pretty cute, other than the mess that was made when Ben picked up his lunch box and started waving it excitedly in the air. It also made me think of this sweet video about a parent’s normal being a child’s magic. I really enjoyed this trip for the opportunity to be creative and think outside my normal parenting box. 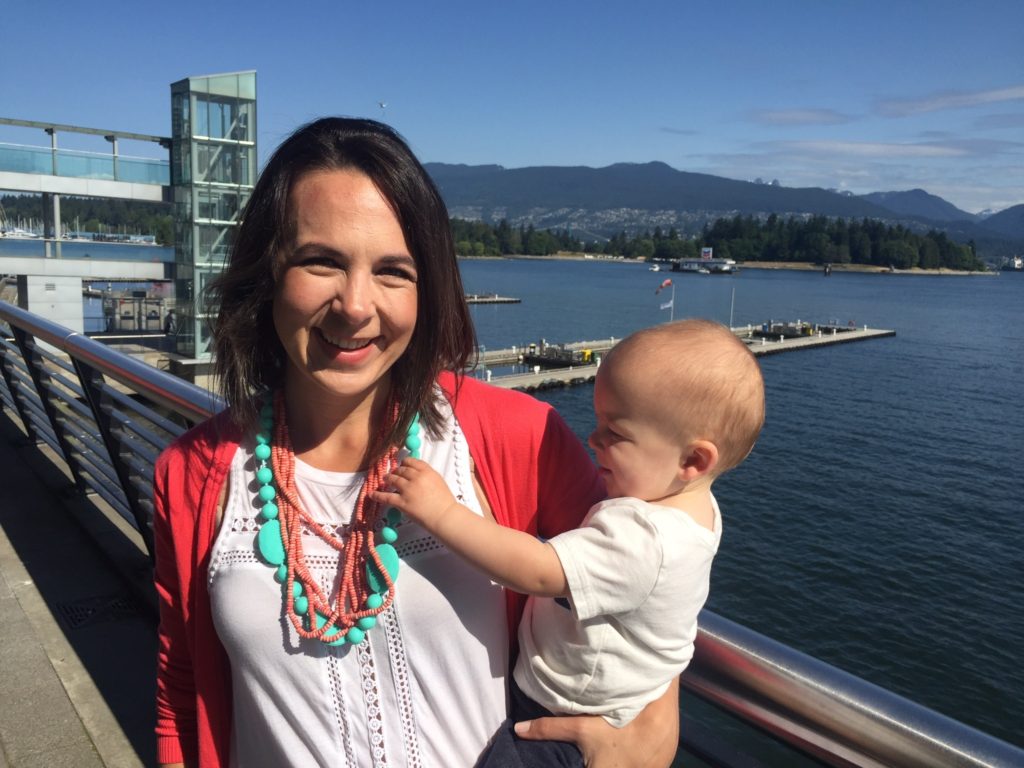 After a really fun breakfast on Saturday morning we rented a couple bikes and went for a bike ride through Stanley Park. I think Ben loved the bike ride but hated his helmet! 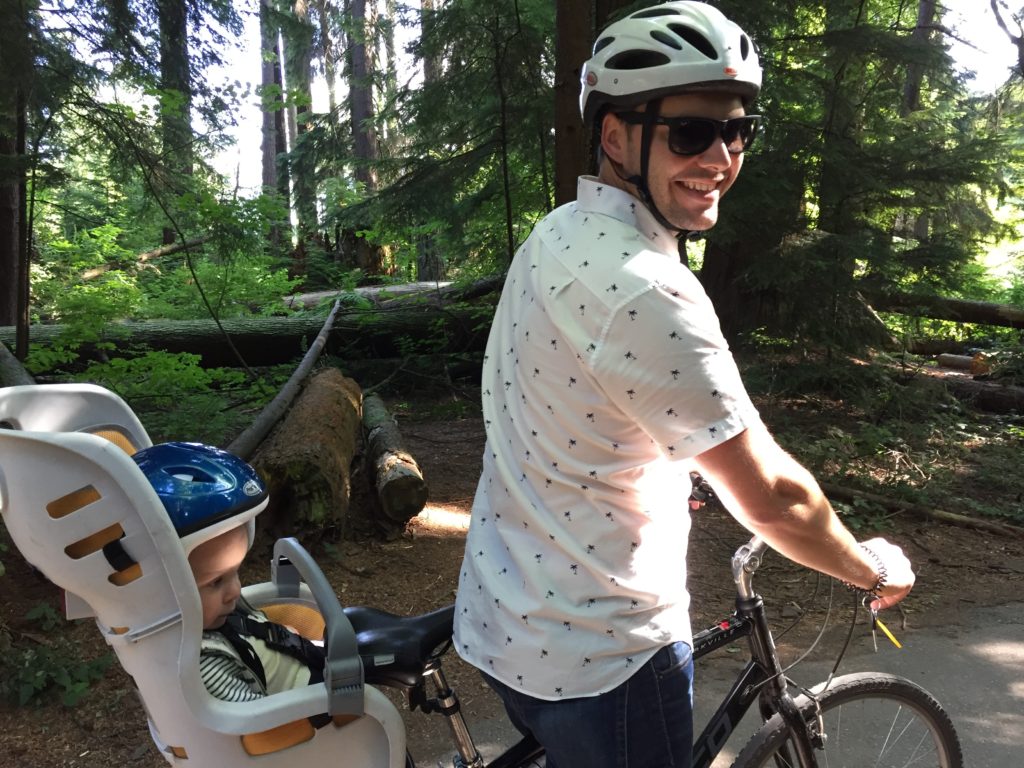 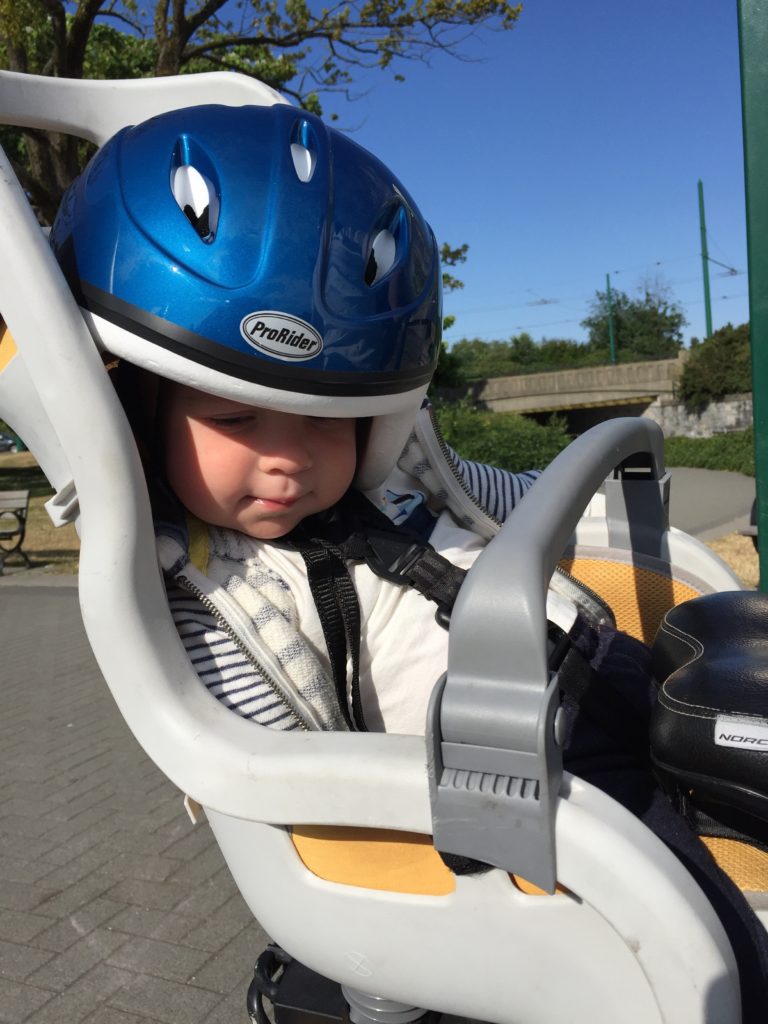 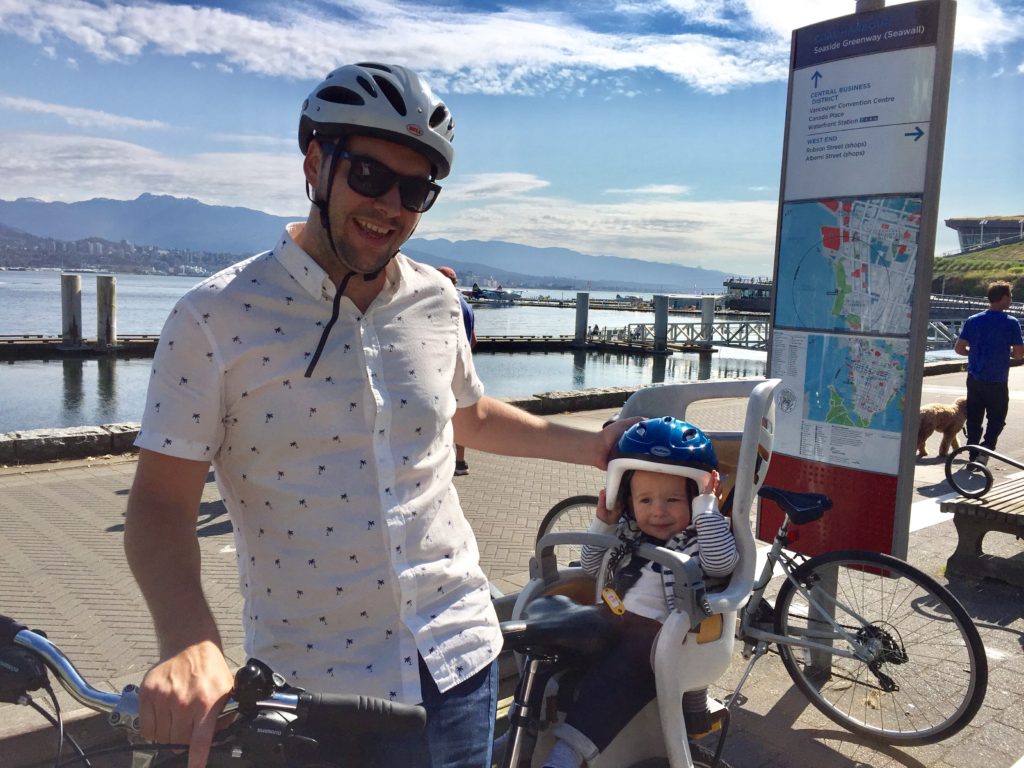 Our trip was really quick – after our bike ride we packed up the car and headed out in time for Ben’s long morning nap. We employed the same strategy that I used on my drive up, and that was to stop at a playground on the other side of the border. We had a suuuuuper long border wait time, so we were all ready to get out of the car and stretch our legs. 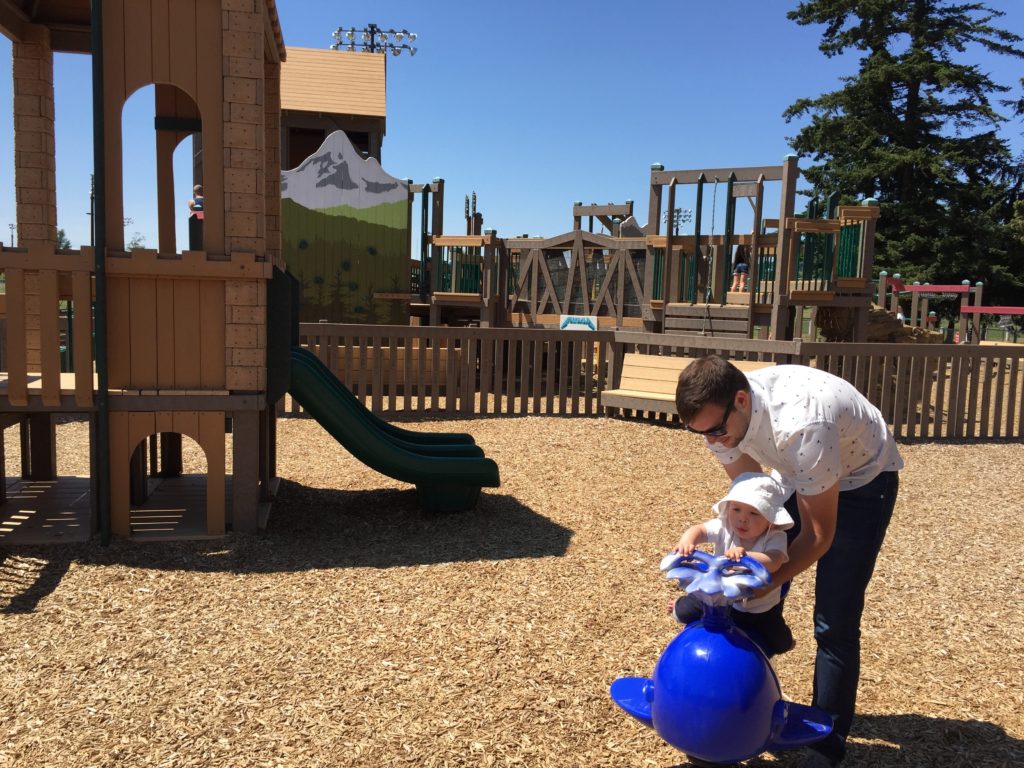 I’d say our trip to Vancouver was a huge success! I’d definitely do it again.