Now that we’ve had little Jackson for about a week I figured I should post some more photos and info about how things are going.

Jack is doing really well and seems to be settling into our home quite nicely. We don’t have much in the way of a routine or a schedule yet, but we’re working on getting there soon.

The weather has been sort of iffy this week but we have managed to take advantage of sun breaks each day and get some great playtime outside. Jackson is a fast runner and loves to sprint around the perimeter of our backyard. I have a feeling there’s going to be a “dog track” around the outside of our yard someday soon from those four big paws.

Changing the focus from Jack a bit, Oliver cat gave us a little scare on Thursday night. He came in from playing outside and seemed to be choking or gagging on something. After a while, I decided that there was something going on so I took him to the animal ER. Indeed, he did have a very nasty, thick, sharp piece of grass caught way back in his throat. He had to be sedated for the docs to remove it. Oliver has made a quick recovery and was able to come home with me that night.

I got a glimpse at Jackson’s future of being a front porch dog. I am really looking forward to having our morning coffee out on the front porch with Jackson laying out and soaking up some Seattle sunshine with us. 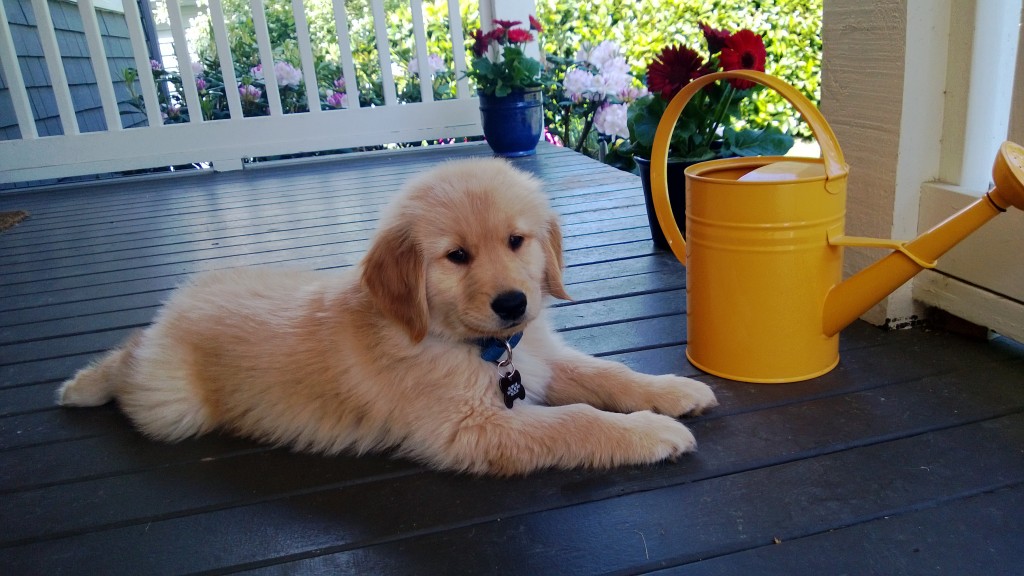 We have introduced Jack to sitting, laying down and standing using food lures and hand motions. Hopefully this week we’ll graduate into the “sit”/”down”/”stand” commands using hand motions and verbal cues. He is getting used to his leash and we have not started walking much with him yet. We are going to be very strict about teaching him how to walk on a leash so as to avoid starting any bad habits from the beginning.

Things are off to a really great start. I think we are much more prepared and confident this time around!