It’s official – Alex and I are puppy parents once again. We welcomed our newest four legged furry friend into our home and our hearts on Sunday. Jackson is a 7.5 week old Golden Retriever who we got from a breeder in Salem, Oregon. We named our puppy after Jackson Hole Mountain Resort.

So far, things are going extremely well with Jackson! He is adjusting very well to his new life and we are enjoying getting to know our new little pup.

We selected Jackson, who was “blue boy” in our previous photos, because he was very interested in playing with toys and he was super cuddly. “Blonde boy” in the litter was chosen first, by another family, “green boy” was way too independent and not very interested in us, and “silver boy” was very small and had a strange kink in his tail. So, “blue boy” seemed to be the best out of the bunch, but we have since realized he really is a great fit for us.

Since Jackson came from Salem, Oregon, we had a long drive back to Seattle. The four hour drive felt a lot longer than that because Jack was terrified of being in his crate in the back of the car. He had never been separated from his siblings and was having a hard time adjusting. I ended up holding him for about half of the trip and that quickly calmed him down.

Once we got home we were able to really start engaging with Jackson and seeing his personality come out. It turns out he is extremely playful and loves to run and play with toys! He had so much energy and excitement on Sunday when we got home – we were surprised at how long it took him to crash.

We didn’t expect to get a whole lot of sleep our first night with Jackson, which did end up being the case. We ultimately woke up for the day at 4:30 a.m., and of course by the time we had finished our first cup of coffee he was out cold. Monday was our first full day with him and we got a chance to see just how much sleep he needs. It seemed like he had bursts of energy that lasted about an hour and then needed to follow that up with a 2-3 hour nap. To help him adjust to being on his own, we decided to try to put him in his crate for short periods of time when he was really sleepy and when we would have the opportunity to take him out and play right away afterwards. This seemed to work quite well and his whining and crying disappeared almost altogether. Our second night was amazing – he woke up around midnight and went out and then when we woke up at 6:00, he was already awake but he was just hanging out in his crate and not crying. Victory!

Jackson got his first shower on Monday. He seemed to easily adjust to the shower and then fell asleep on the bathroom floor when I was drying him off. I suppose a full body massage would put me to sleep too.

Things have been pretty easy so far, but give Jack a few days to finish adjusting and Alex and I both know that we’ll soon be tested. We start puppy class on June 5th, but until then, we’ll introduce him to treats and then work on some basic commands like sit, stand and down, as well as learning to not jump on people and how to walk on a leash. Training is so much fun, so hopefully he will be receptive and motivated by delicious treats.

Overall, Jackson is fitting in very well with our household. He is doing great with the cats and the cats seem to be doing very well with him, too. He has had a few bonding moments with both Oliver and Henry and I am hoping that they’ll eventually become friends. Either way, Jack is a great addition to our family and we’re really looking forward to watching him grow up to be an amazing dog. 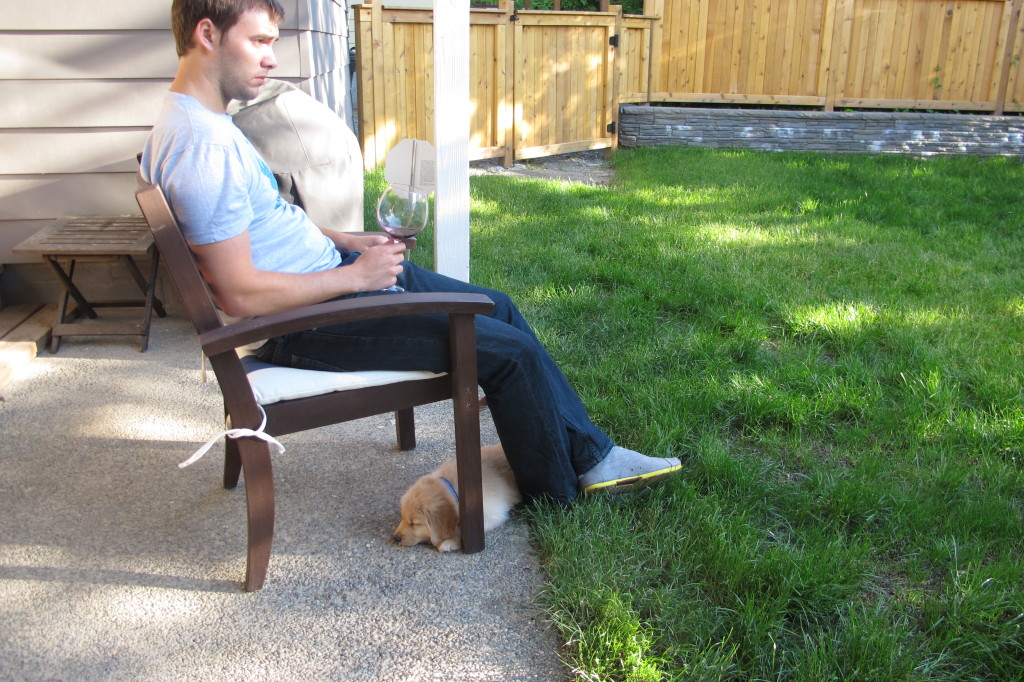