Miss Hannah is eight months old and full of joy, squeals and smiles. She is getting more animated and excited about everything by the day. It’s hard to keep up with her frequent changes! 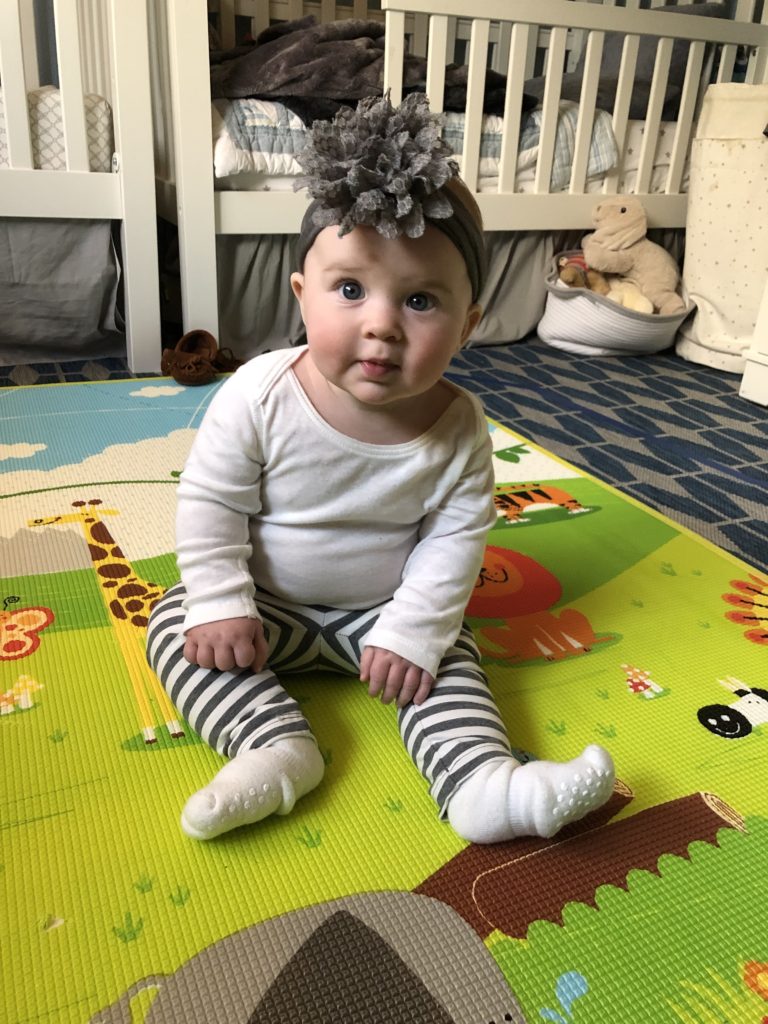 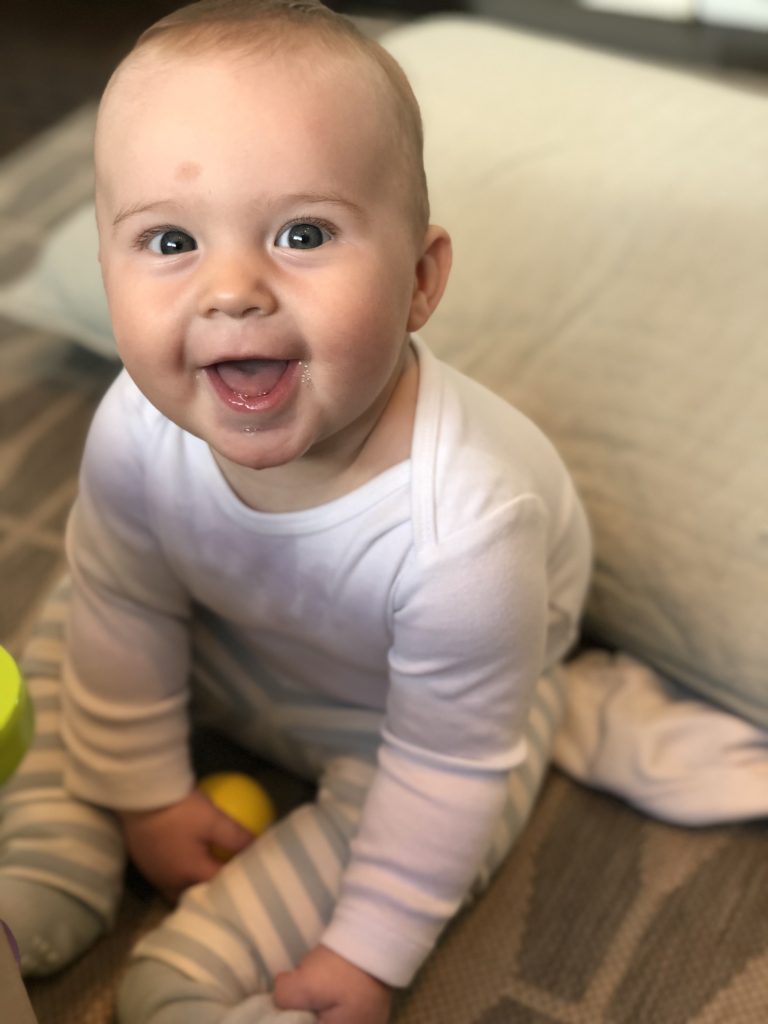 Over the last month or so Hannah has been working very hard on moving. She is doing barrel rolls like it’s her job, she loves scooting around the room and can do pivots on her back or tummy. No crawling yet – I thought she was closer than she actually is. She still needs to get up on all fours so I think she has a little ways to go before she starts crawling.

Hannah is making her opinions known and shares them loudly! Hannah is so noisy. She squeals with excitement and screams out of frustration. Sometimes to an untrained ear it’s probably hard to tell the difference. 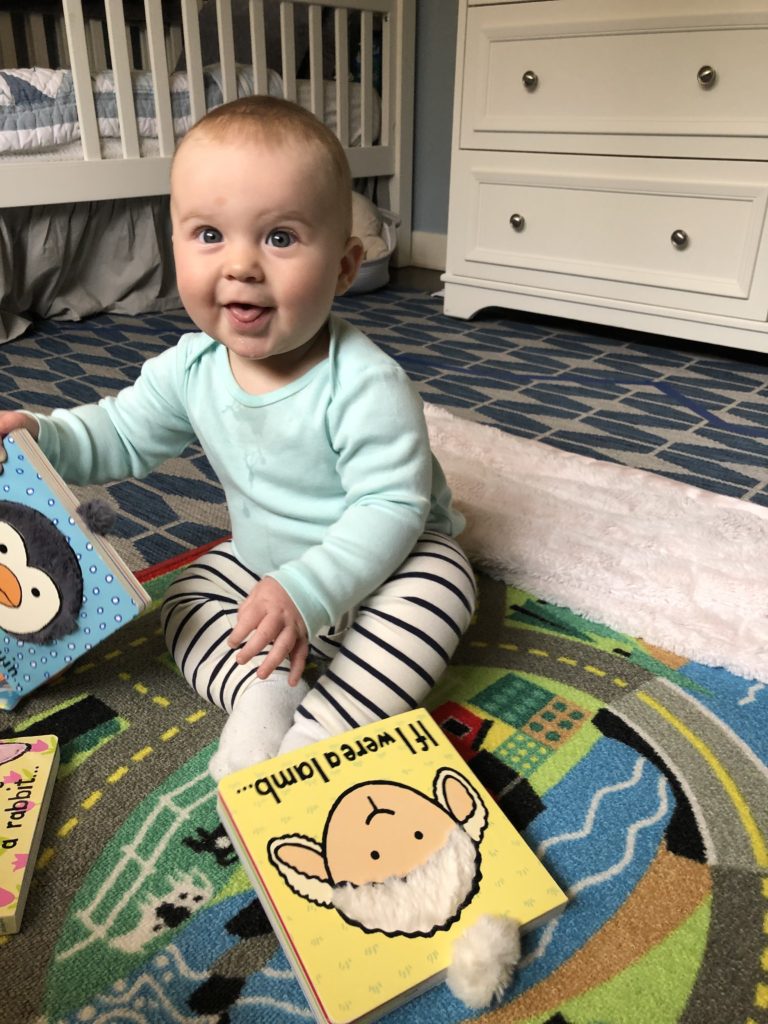 Our sweet girl loves to be a part of the action. She loves attention and will most certainly let you know if you’re not giving her enough. She shrieks and squeals and makes all sorts of wild animal noises to communicate what she wants. 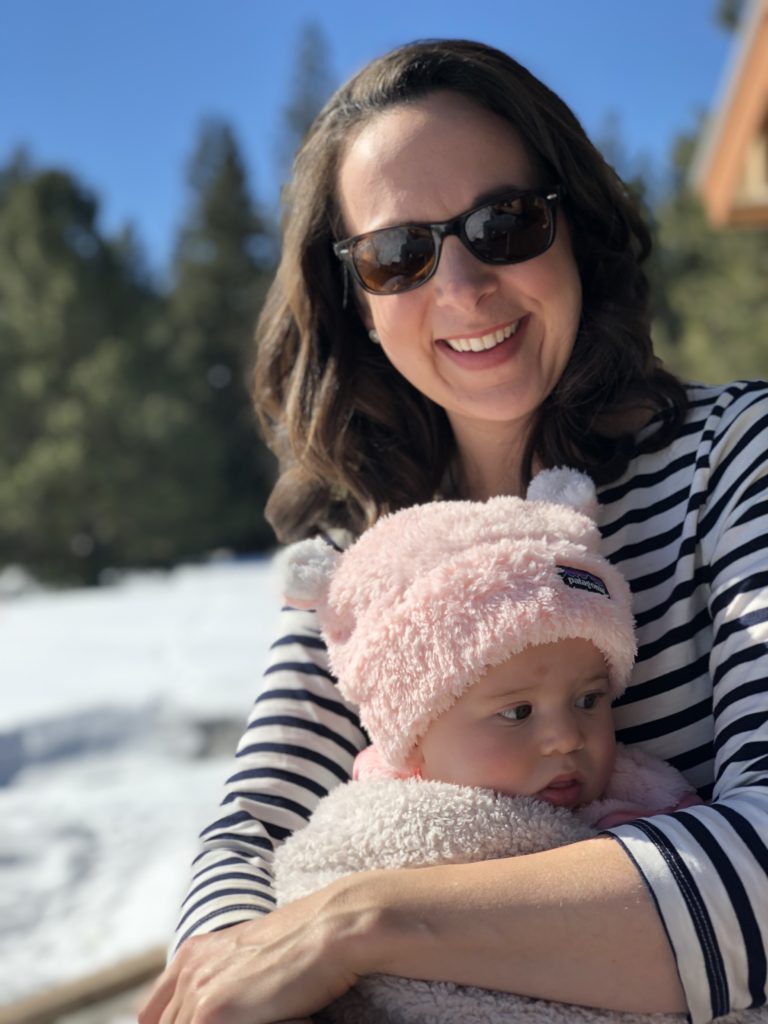 Lately Hannah has really become a dada’s girl. She has been saying “dada” or “dadadada” and gets super smiley and squealy when Alex comes near her. It is adorable. 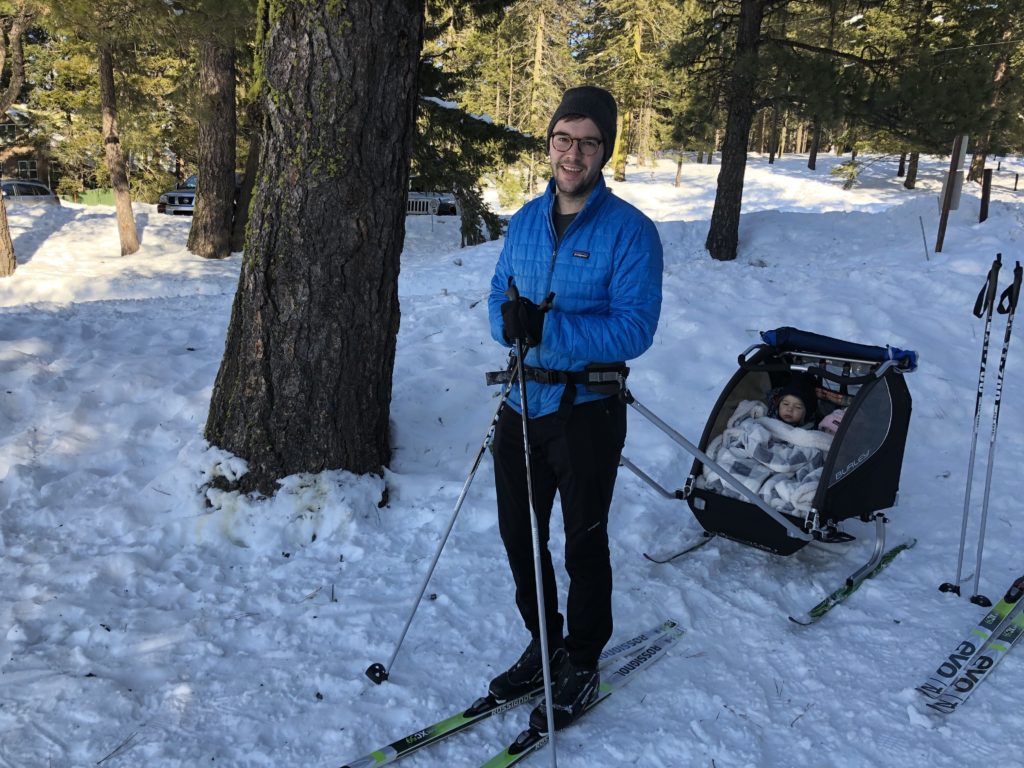 Ben is Hannah’s first love, though. Anything and everything he does can get a giggle out of her. Ben loves to roar like a dinosaur to try to make Hannah laugh – he has a 99% success rate I think! 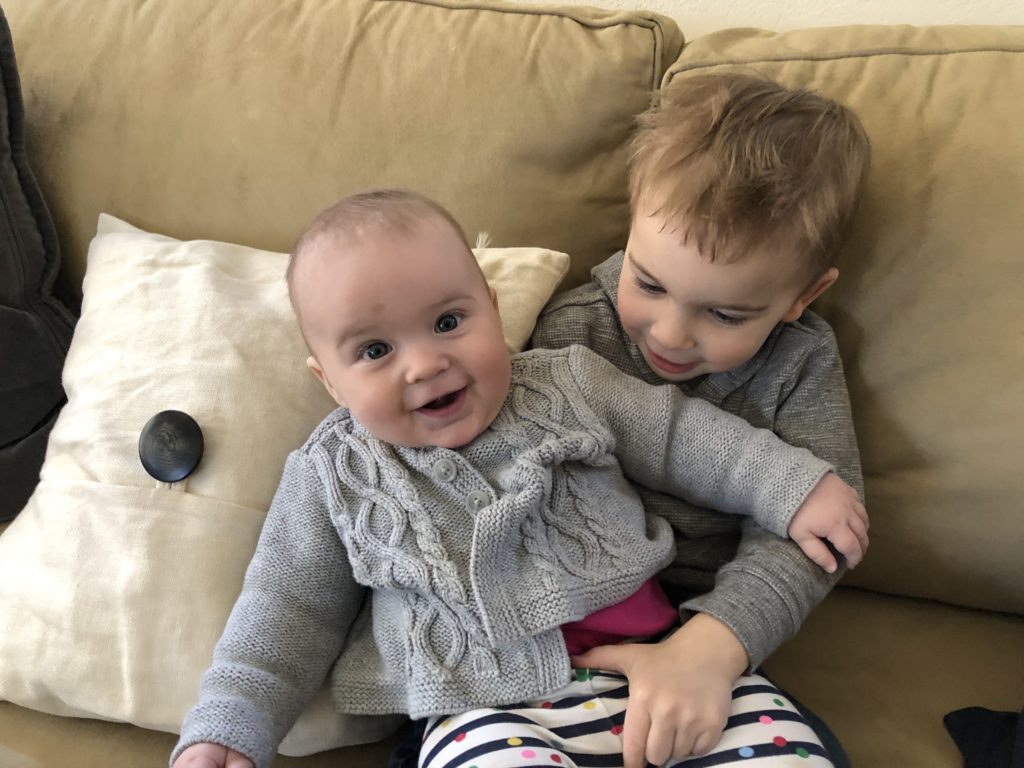 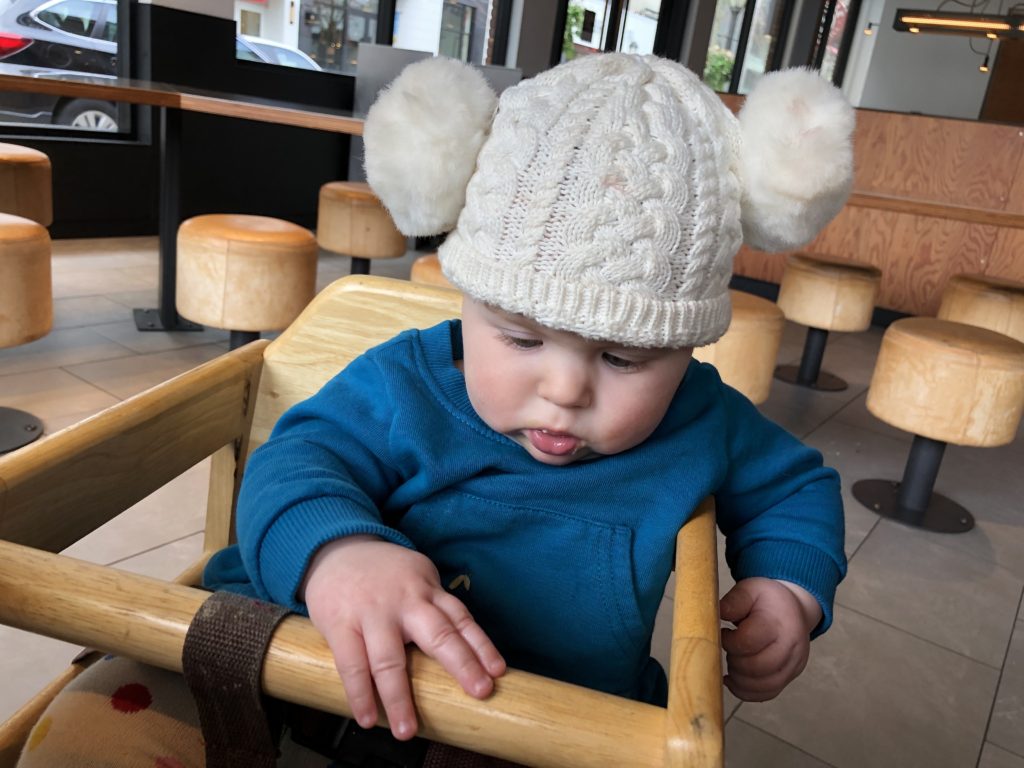 It’s really hard to narrow down Hannah’s favorite foods. The only thing I’ve given her that she doesn’t like is avocado, otherwise she’s loved it all. She can eat a tremendous amount of solid food, too. She has been known to down a pouch and a half in one sitting before {that’s a lot for a 7-month old!}. 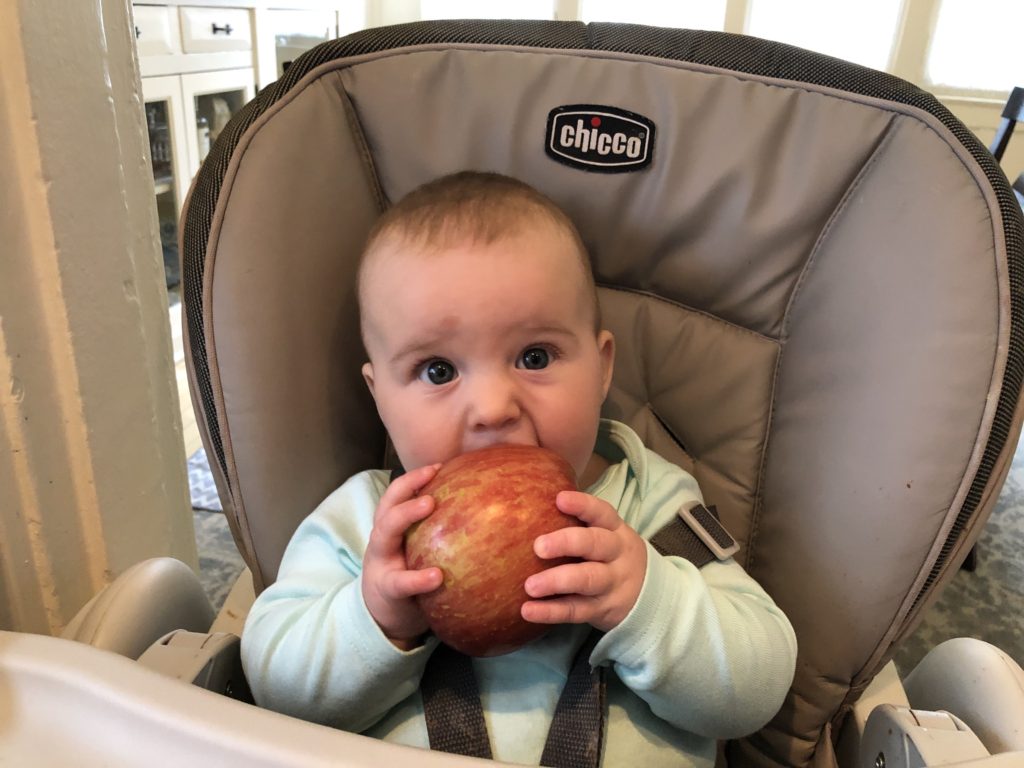 I have started feeding Hannah the Once Upon a Farm pouches – in my limited research these seem to be the real deal and Hannah LOVES them. She quickly figured out how to eat straight from the pouch, as opposed to from a spoon – this is much faster and far less messy. Once recently, Hannah got frustrated with me spoon feeding her from a pouch and grabbed the pouch, put it in her mouth and fed herself. This girl knows what she wants!

Hannah has been playing very independently lately. She is very much in the stick-everything-in-her-mouth phase, so she loves teething toys. She also loves our activity cube, a toy we got when Ben was a little older than she was. This is our tried and true attention holder toy – it is so wonderful and Hannah is so into it. 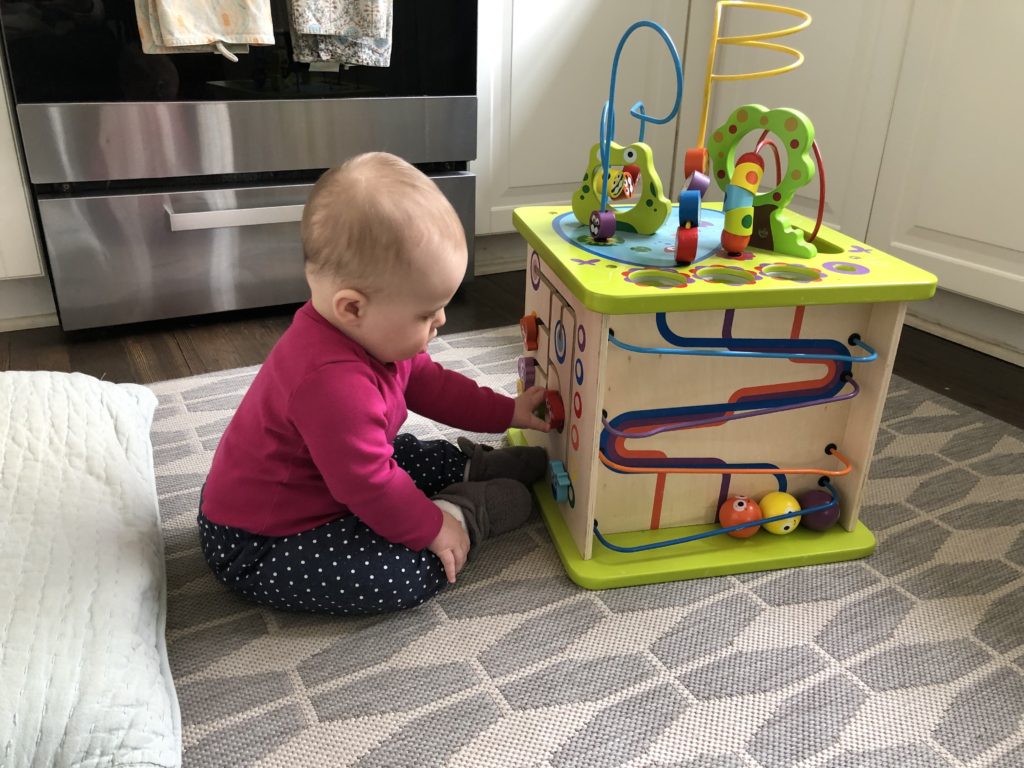 Anything that Ben has is of tremendous interest to Hannah. She is so curious about everything her big brother does and has and this is a great source of frustration for them both. 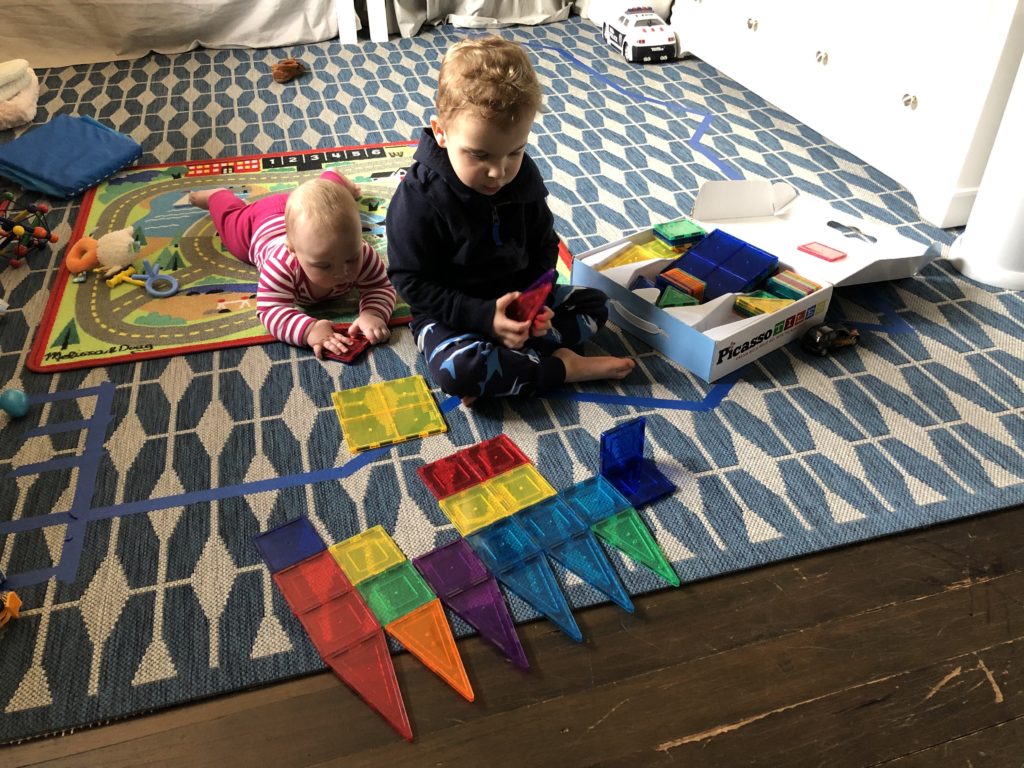 Since she was about 10 weeks old, Hannah has been sleeping through the night. The last five weeks or so have been more hit-or-miss, I think with the changing environments since we’ve been back and forth to The Lodge a bit more. More often than not she is sleeping through the night – sometimes she just wakes herself up and, really, I probably go in there too soon out of fear that she’ll wake up her brother. 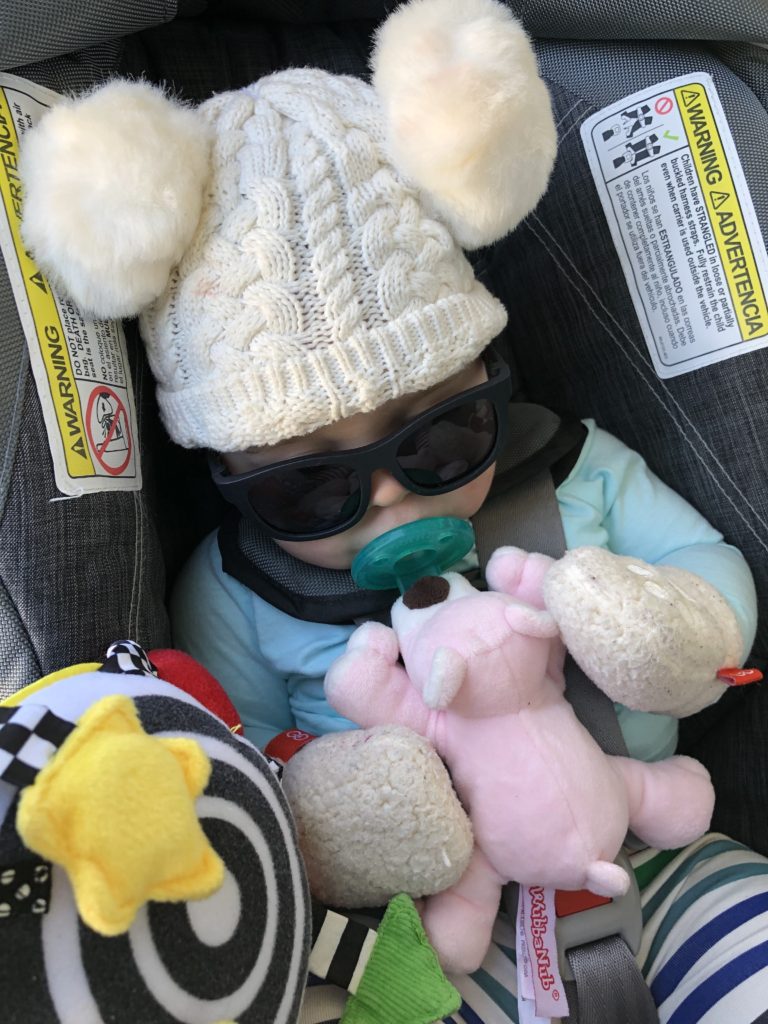 One of the biggest challenges of having two young kiddos is managing the logistics. Hannah’s naps have been so inconsistent. When given the opportunity, she’s a great napper, and when being carted around from here to there she finds the chance to take cat naps and then falls asleep a little earlier at night. These days she’ll either take two or three naps during the day, depending on what we’re up to and how mobile she is. She is such a trooper with sleep, though I do wish I could consistently allow her at least one long nap every day. 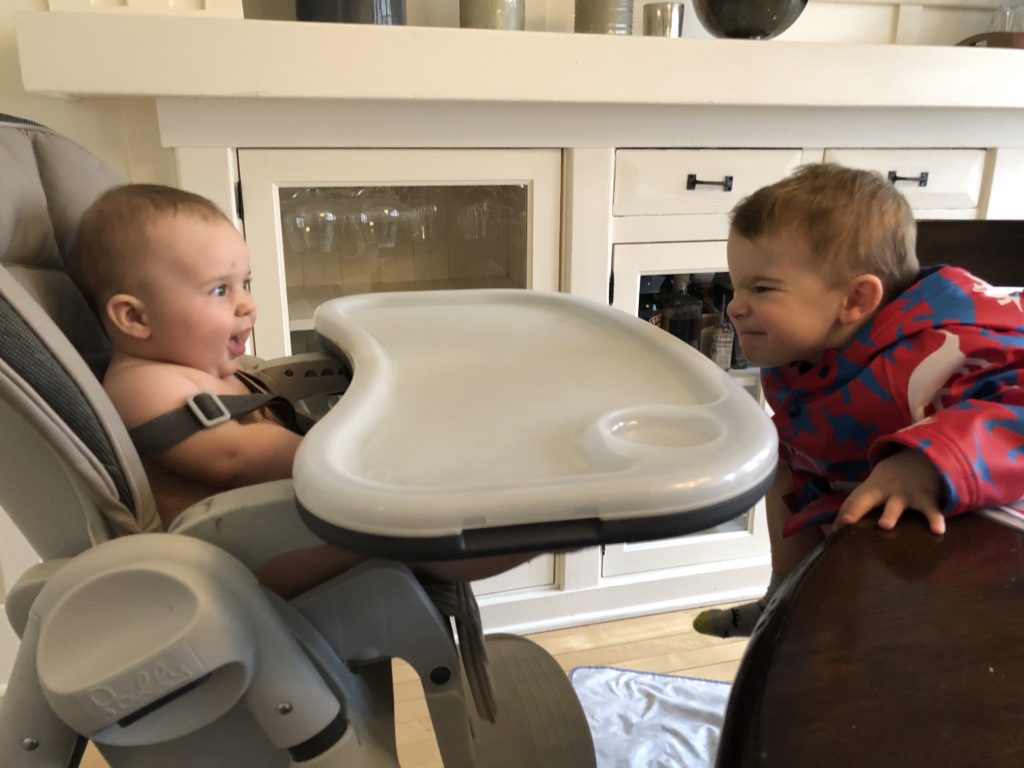 This sweet little girl continues to light up the room and our little house. We adore her so very much!

Ben at eight months old – they had so much in common!