My friend Sarah recently pointed out that Ben has been alive longer than he was in eutero for! He is officially 8 months old. As most people say it just keeps getting more and more fun!

Ben hasn’t had a doctor’s appointment for a while so we haven’t gotten too many updated stats, but as of a few days ago he weighed 16 pounds 10 ounces. He has been bouncing around the 8th-9th percentile for weight recently. 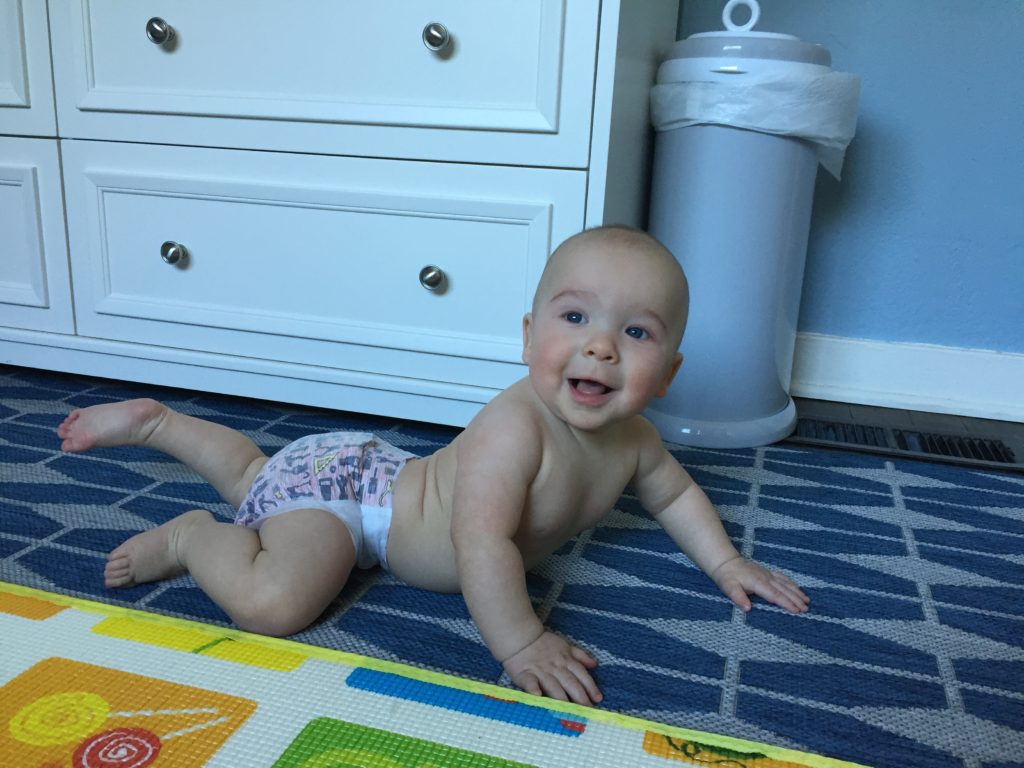 Right now Ben is working on seeing how fast he can bust out of the size he’s in. He was in 6-9 month / 6-12 month stuff right after he turned 7 months old and already some of the 9 month clothes {Carter’s brand} are too small for him. He still fits into 6-12 month.

Over the last month Ben has gone through tremendous changes. One of the most notable has been sleep! He started sleeping soundly through the night about 3.5 weeks ago and hasn’t looked back. I think there have only been 3 occasions in the last 3 weeks that he’s woken up once in the middle of the night. His bedtime is 7:00ish and then he sleeps until between 6 and 7 a.m. His naps have been much more consistent and he has been putting himself to sleep for most naps. All of our hard work and consistency these last several months is really paying off! 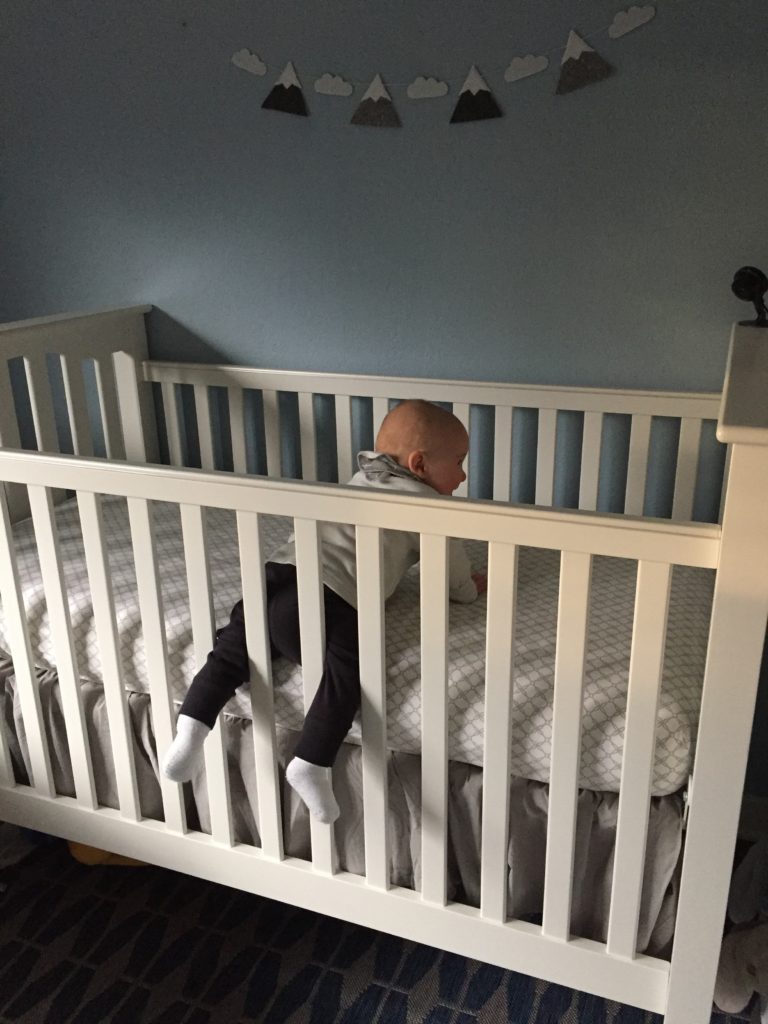 Ben basically never sits still. That holds true when he’s in his crib too! Normally he’s not this silly, but our nanny caught him dangling his legs out the side of the crib when she put him there to leave the room momentarily. He regularly surprises us with his crib gymnastics!

Ben puts everything in his mouth these days! He’s a little drool factory! 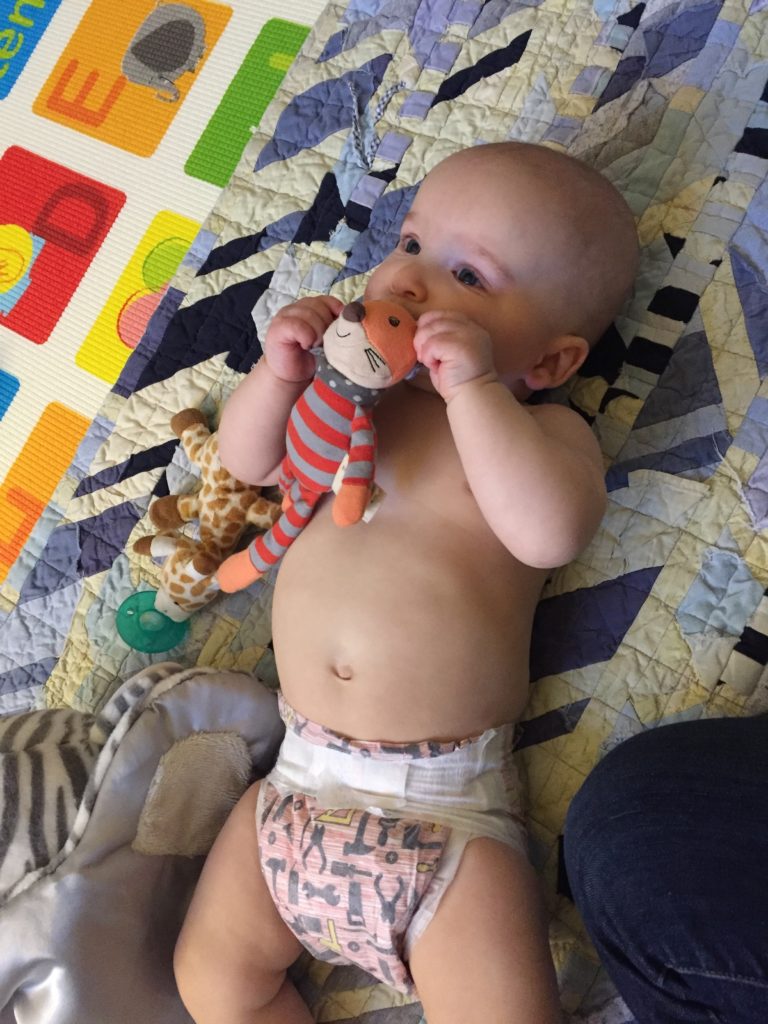 The most noticeable milestone from this last month was that Ben started sitting up totally unsupported. He went from being really wobbly or doing the tripod sit to sitting up with control in a matter of a day. It was a drastic change that happened extremely fast. He had been really close for weeks and then one day he had built up enough core strength and determination and figured it out! 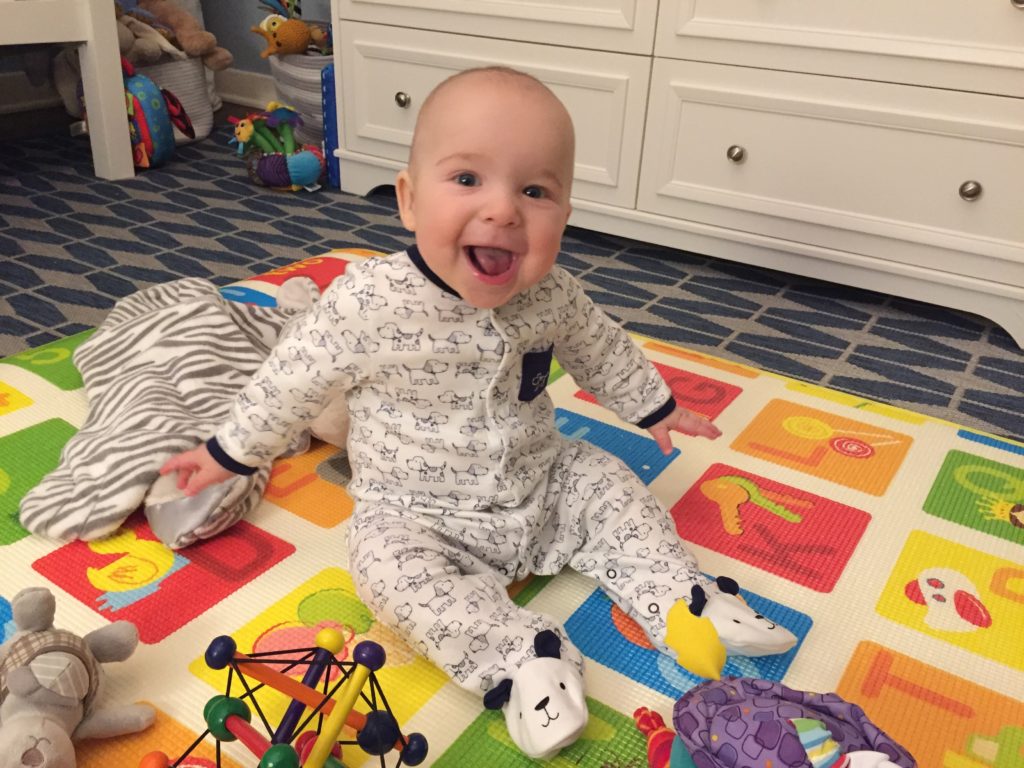 It has been so nice to plop him down on the ground in a seated position with a toy where he can hang out with a new vantage point. He’ll occasionally crash down on his head if he’s not paying attention but mostly he’s worked out how to fall with control. He is still figuring out how to get into a seated position on his own. 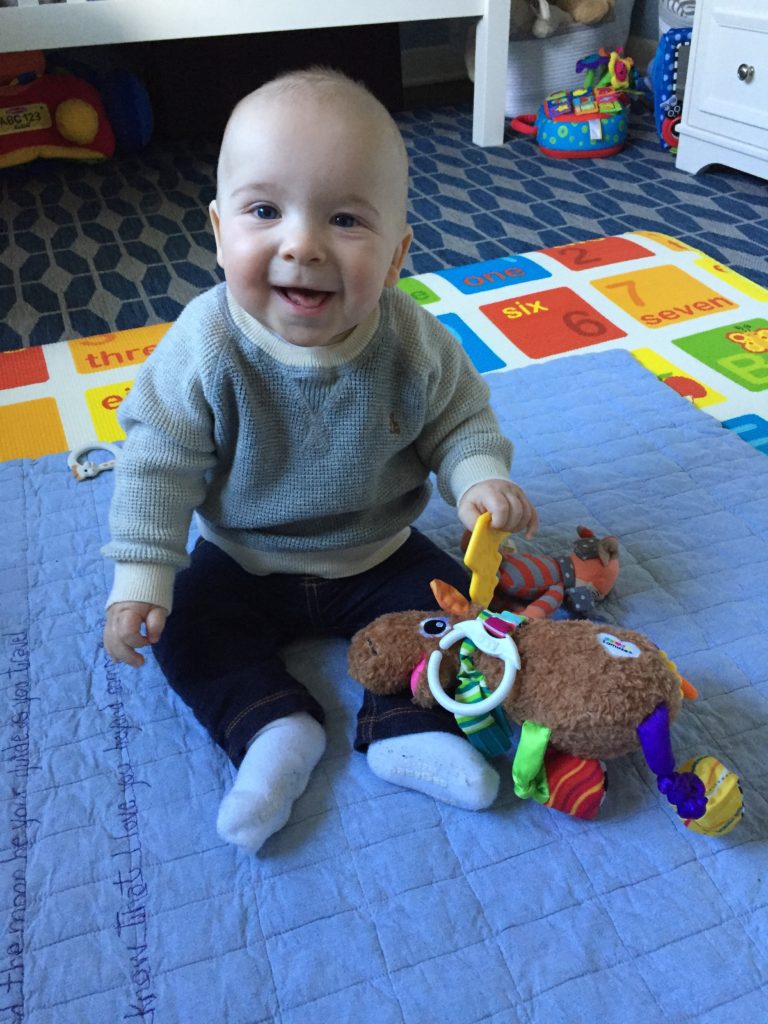 As expected, once he started sitting, the scooting quickly followed. Ben can scoot backwards – he seems to have about a 5 foot radius right now. Occasionally he’ll exceed that, but mostly he doesn’t go too far. We are excited to see him graduate to crawling! 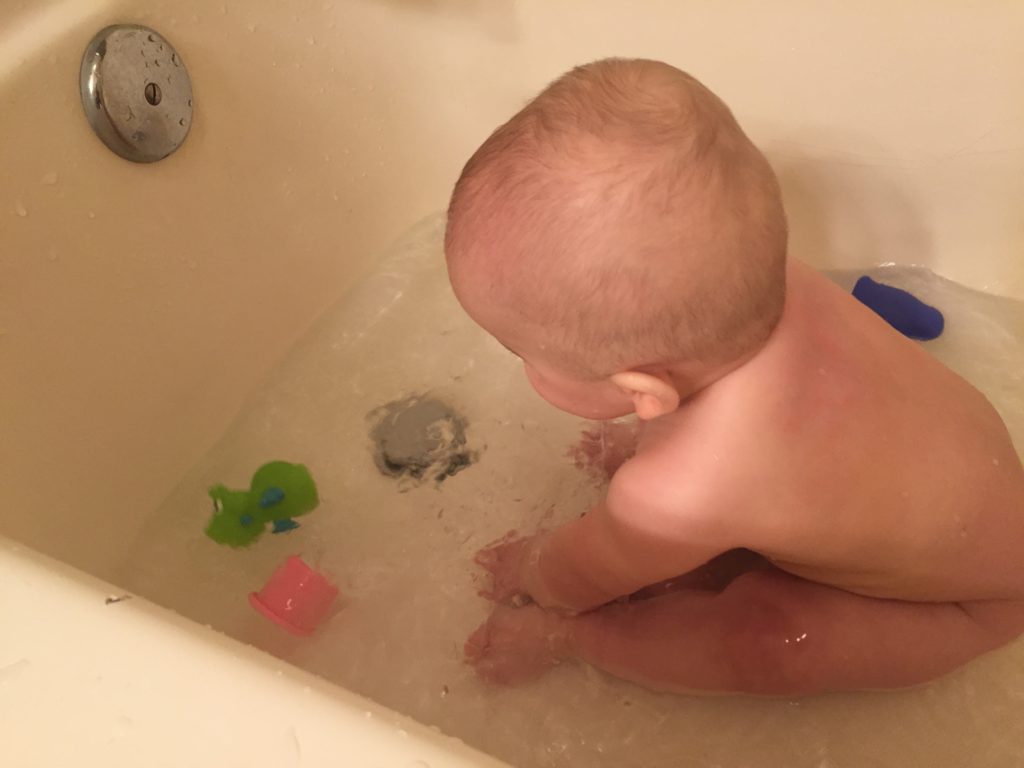 Ben also graduated from his little baby bathtub to the actual bathtub now that he can sit up. He absolutely loves the water! I took him swimming last week, too. We had a blast! 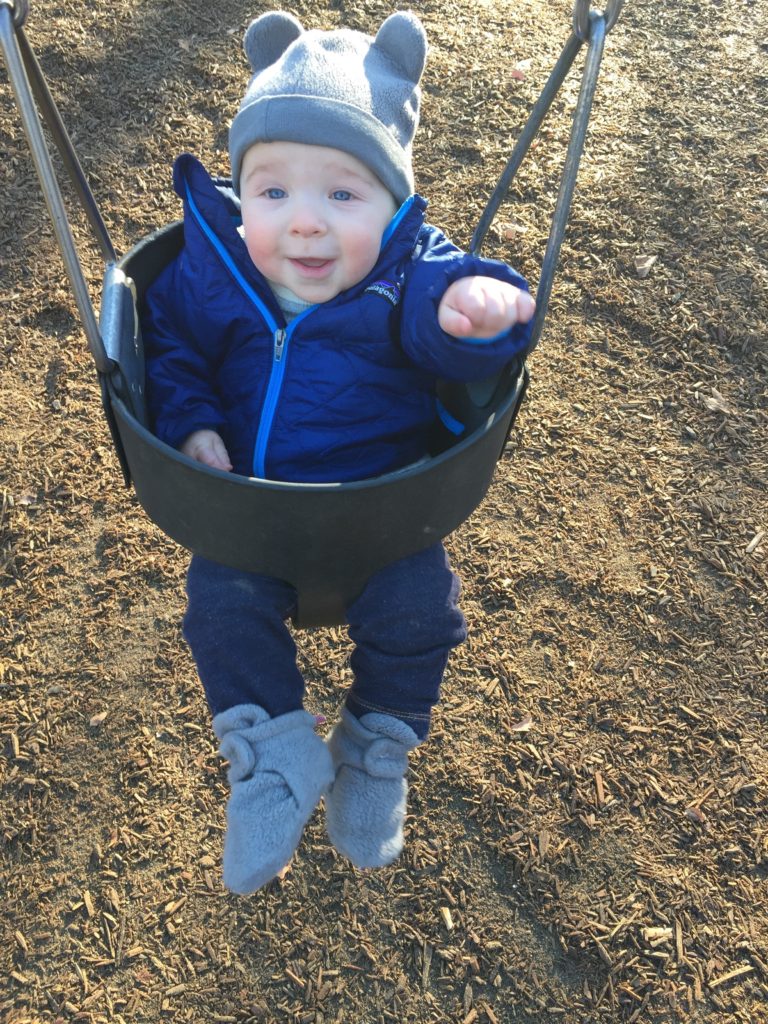 Feeding Ben solid foods continues to be a highlight. It’s so fun watching him explore new tastes and textures and see him enjoying food. So far there hasn’t been anything he doesn’t like, except for maybe oatmeal. I can’t blame him though because plain oatmeal is so boring and flavorless!

Ben is a pretty vocal kid. He lets you know when he’s excited, frustrated, annoyed or simply wants to chat. He has been SO chatty lately! He’s working on “da” and “buh” sounds and repeats them with enthusiasm all day long. We’ve heard a few “muh” sounds, but definitely no mama yet. He has a habit of being a liiiiiitle dramatic sometimes. Case in point is this photo: 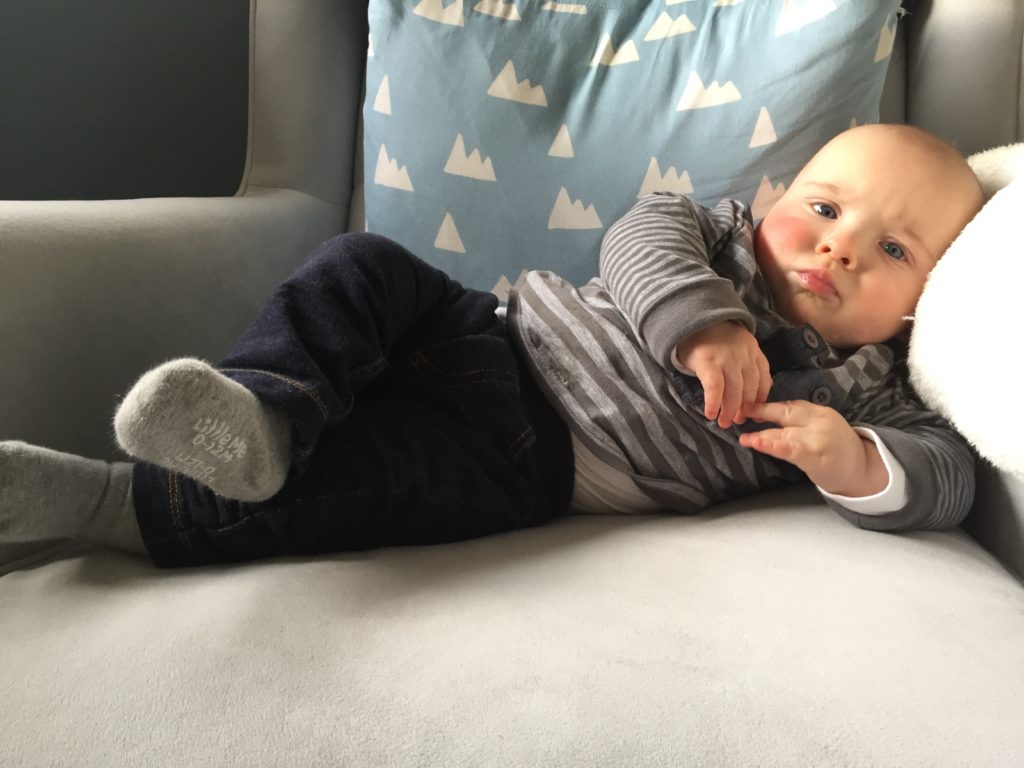 During the month of January Ben got to spend a little time with a few of his grandparents. Alex’s parents stopped here for a day on their way to Hawaii, then my mom came for a brief visit at the end of the month. 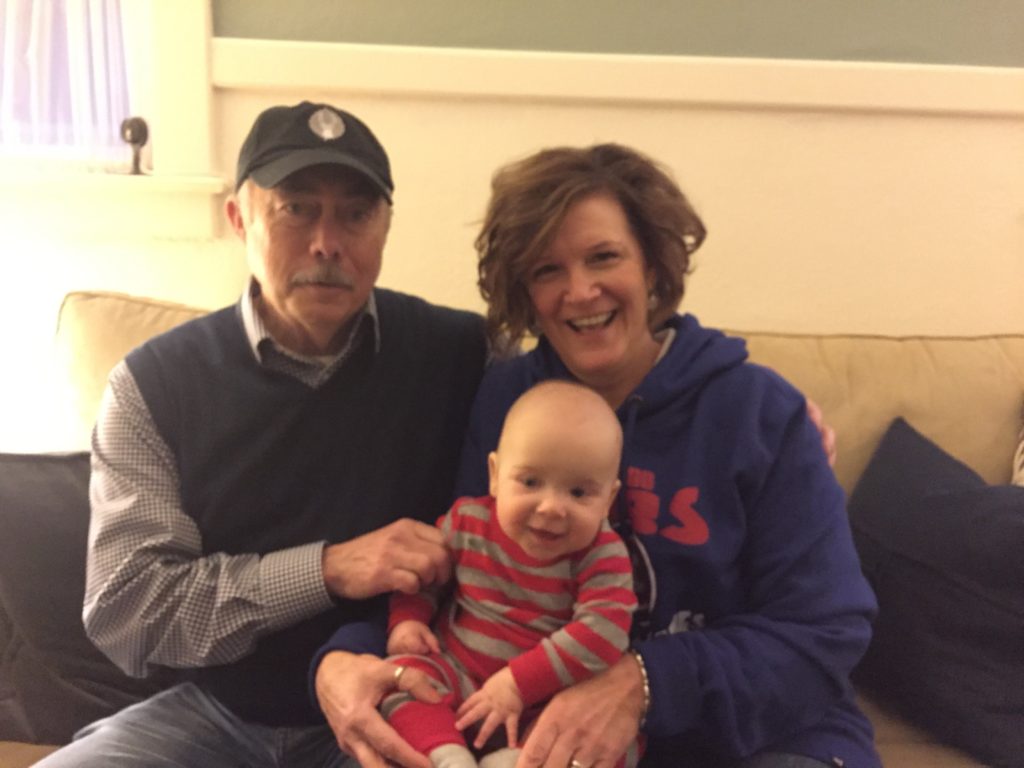 Last week Ben and I had lunch with Nurse Megan, who was Ben’s primary nurse in the NICU. She was so sweet to us all both in the hospital. We’re so grateful to have stayed in touch with her and it was wonderful getting together with her and showing her how well Ben is doing. He’s come a long way in 8 months!

We are loving our new kitchen rug. I wouldn’t have thought to put a rug in the kitchen but especially with Ben it is really nice to be able to plop him down on the floor in there while I prepare some food or empty the dishwasher. And that way he’s not stuck in his high chair or anything – he can be down on the ground playing and exploring. 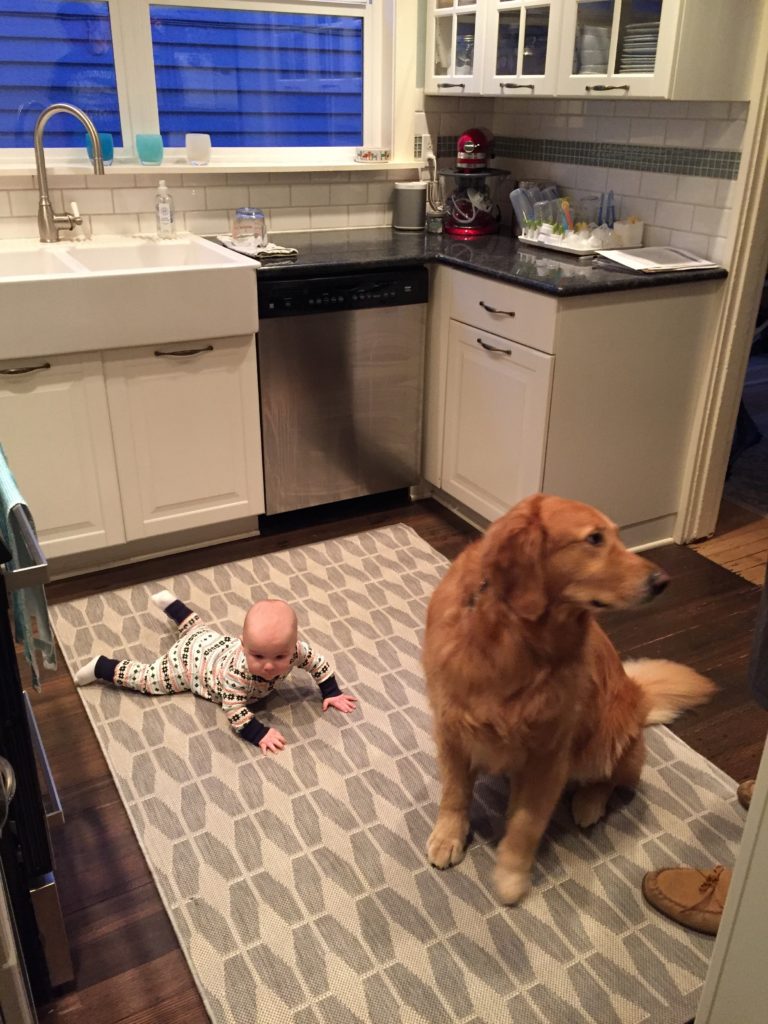 We have a lot to look forward to now that Ben is in his 9th month. He is such a happy kiddo and we are loving being his parents! 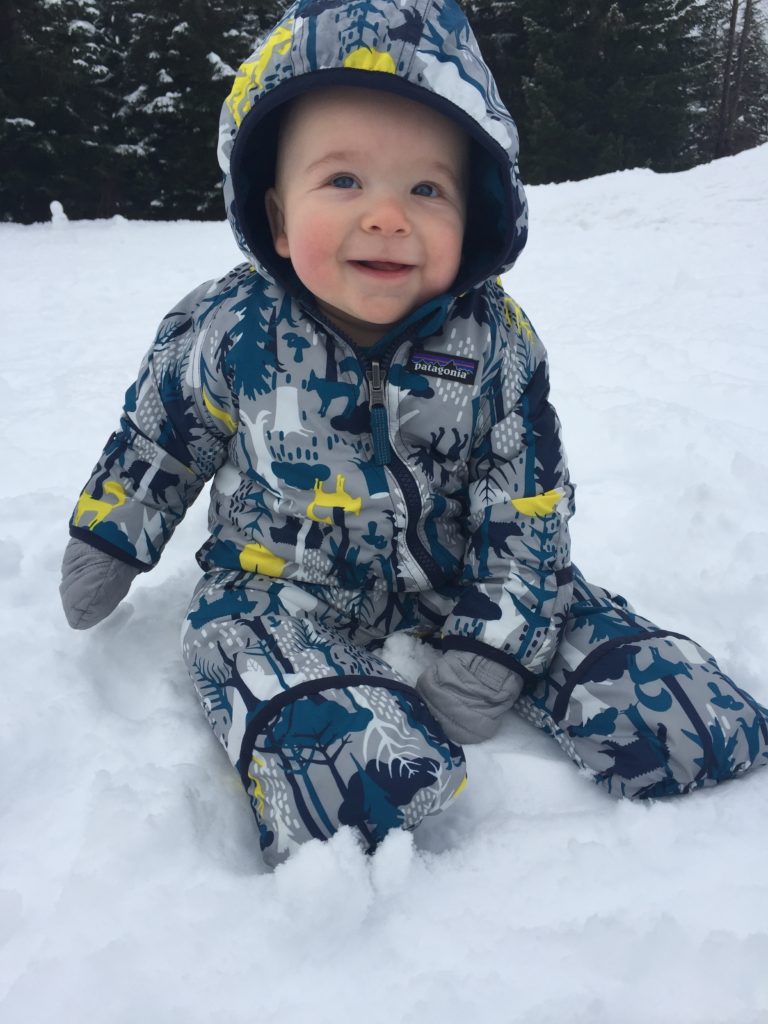