Last weekend was a highlight of our summer in Seattle. We spent the weekend camping in the central Cascades with our friends Carrie, Patrick, Mary and Ryan, and of course Jackson and Berkeley {Ryan and Mary’s dog}.

The drive once you get out of the city is breathtaking. After passing through the town of Enumclaw you start to follow the Green River as you move towards the mountain pass. Most of the drive is through a tree-lined highway that hugs the river. While Alex and I make the drive to Crystal Mountain most Saturdays during the winter, I had never been through Chinook Pass, which is just a bit past Crystal. 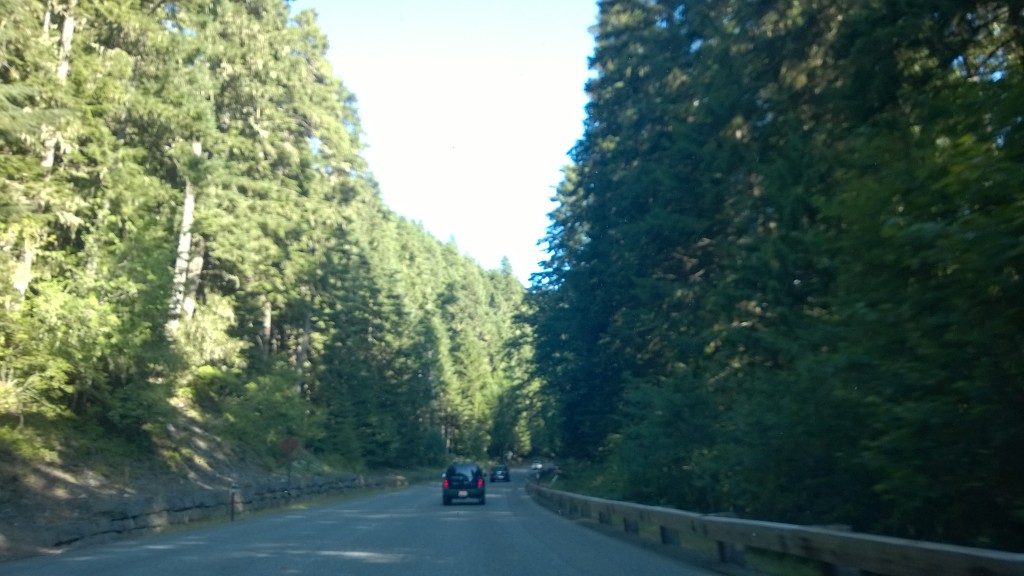 The pass is gorgeous to put it mildly. Once the road starts switching back you have a constant view of Mount Rainier. As you climb in elevation, the mountain in view just gets bigger and bigger and really looks fake. The Millers timed it right and got to see it at sunset. 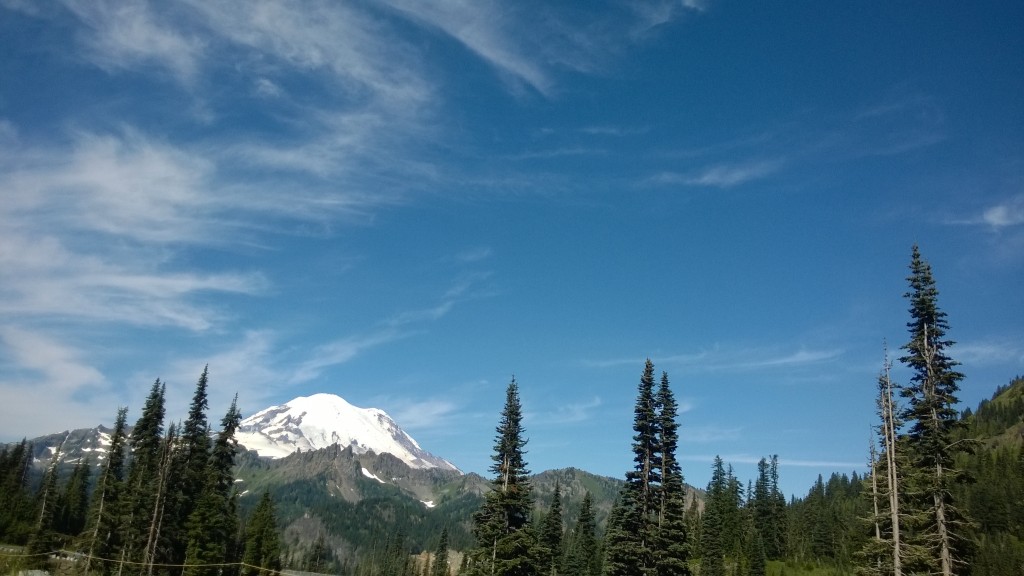 We rolled into our campsite around 7:00, which was just the perfect amount of time to get set up and explore the campground before the Millers arrived at 8:00. 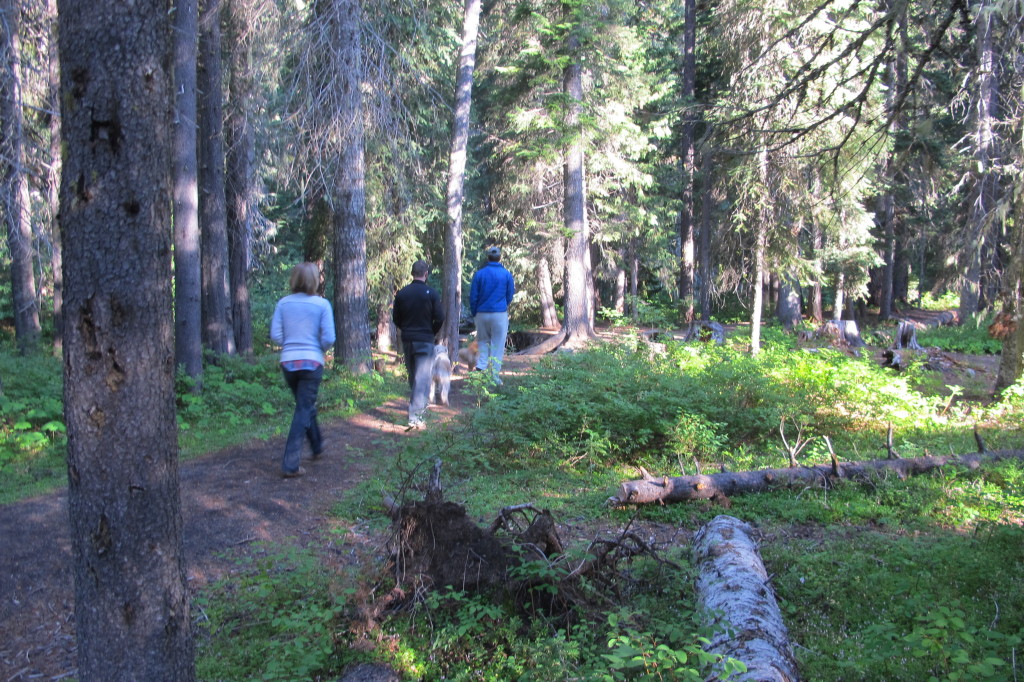 There have been horrific wildfires throughout eastern Washington in recent weeks. Thankfully it seems like they’re under control now. That said, we happen to be technically in the same national forest as the wildfires which meant there was a strict burn ban and we were not able to have a campfire. It was disappointing, but we were fine hanging out around the picnic table and catching up while drinking some wine {or beer}. 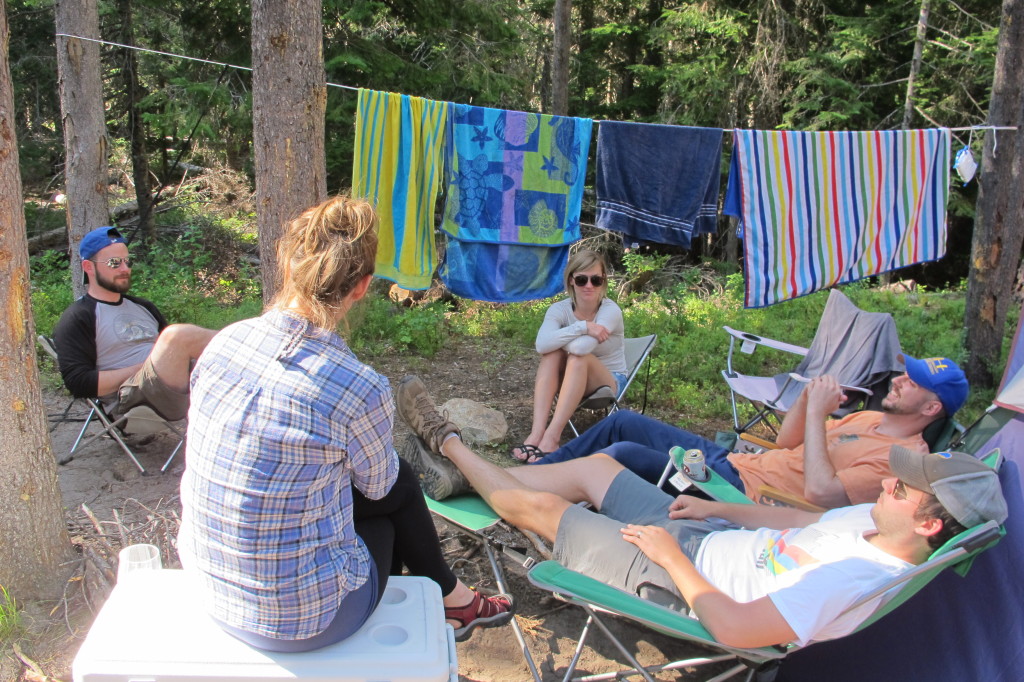 When we woke up the next morning we could tell right away that it was going to be a gorgeous day. There wasn’t a cloud in sight! It was chilly, though!! Most of us were pretty cold in the night, actually. Carrie and Patrick brought the coffee and I’m pretty sure Alex “accidentally” threw a stick at their tent for the dogs to fetch as a way to get them to get up so we could have some coffee {it was locked in their car}… Nice way to wake up your friends!

I was in charge of breakfast for our first day. I whipped up some mighty tasty breakfast burritos and served them along with fruit I had picked up at the farmer’s market on our way the day before. One of my favorite parts of camping is the food. While Mary, Carrie and I love to cook and go all out with food it is always a challenge to pick foods that are easy to transport and prepare at a campsite. Somehow we all seem to come up with new ideas that turn out really well. 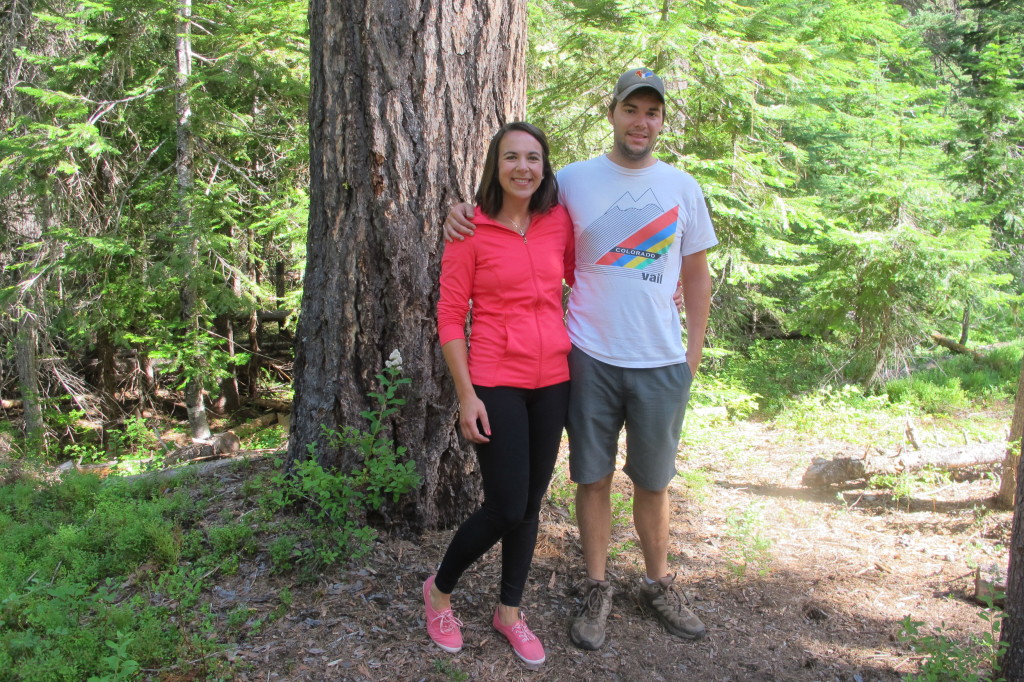 After breakfast we set out towards Bumping Lake to go for a hike. Once we pulled up and let the dogs out of the car they ran about 150 yards down towards the lake. 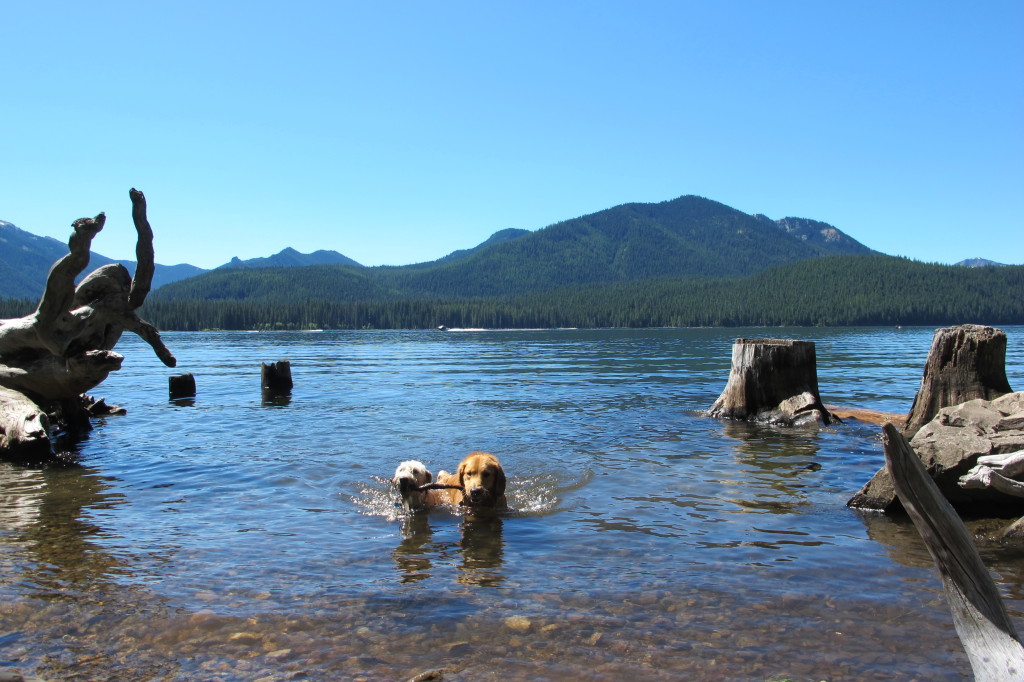 When all of us caught up to the dogs we realized what an awesome spot they found and decided to park ourselves there instead of going for a hike! 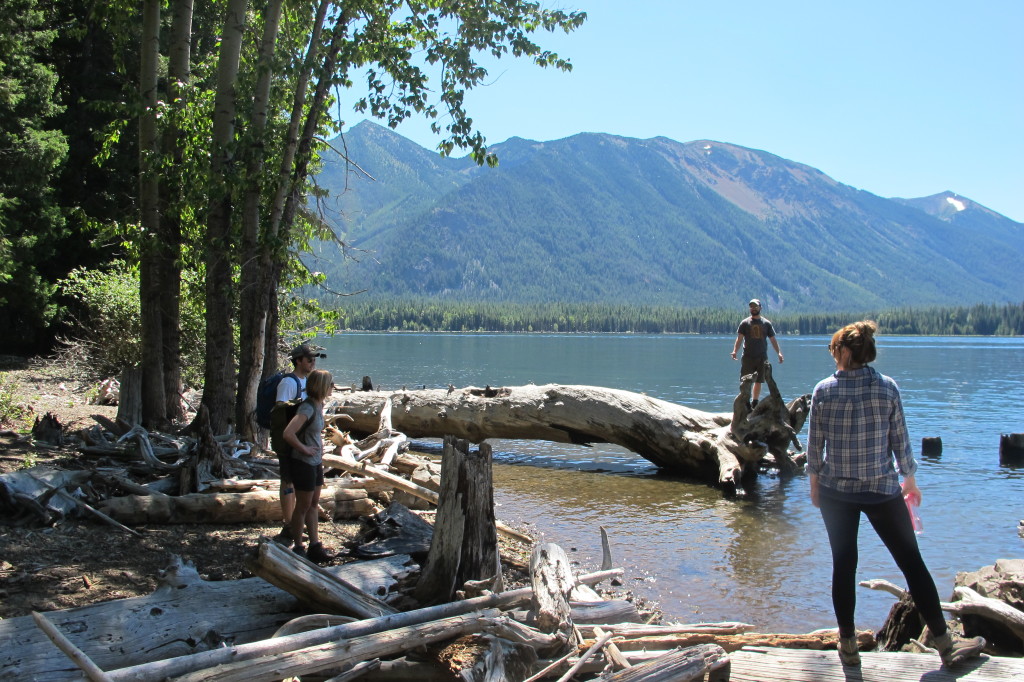 The mountain lakes in Washington are just incredible. We could have sat on the shores of Bumping Lake all day just staring across at the scenery. The two campgrounds we stayed at last summer had such majestic alpine lake views, as well. This one compared quite well! 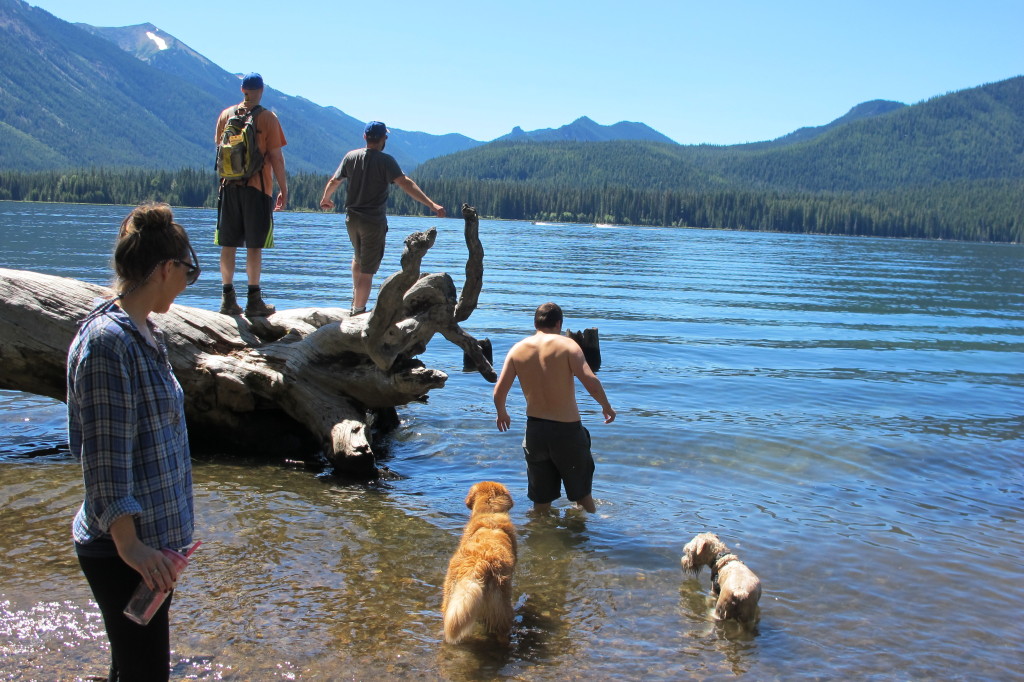 The dogs had fun swimming with Alex. I think the water was a little chilly for him, but the dogs didn’t seem to mind. 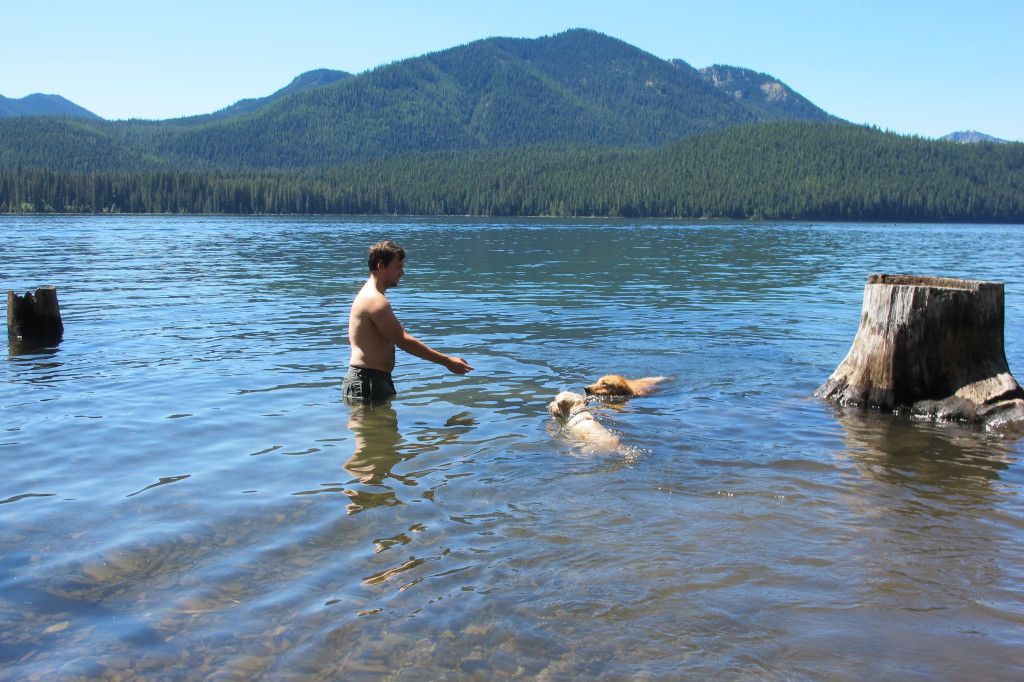 Mary, Carrie and I made ourselves comfortable on a huge piece of driftwood and popped open a bottle of wine. 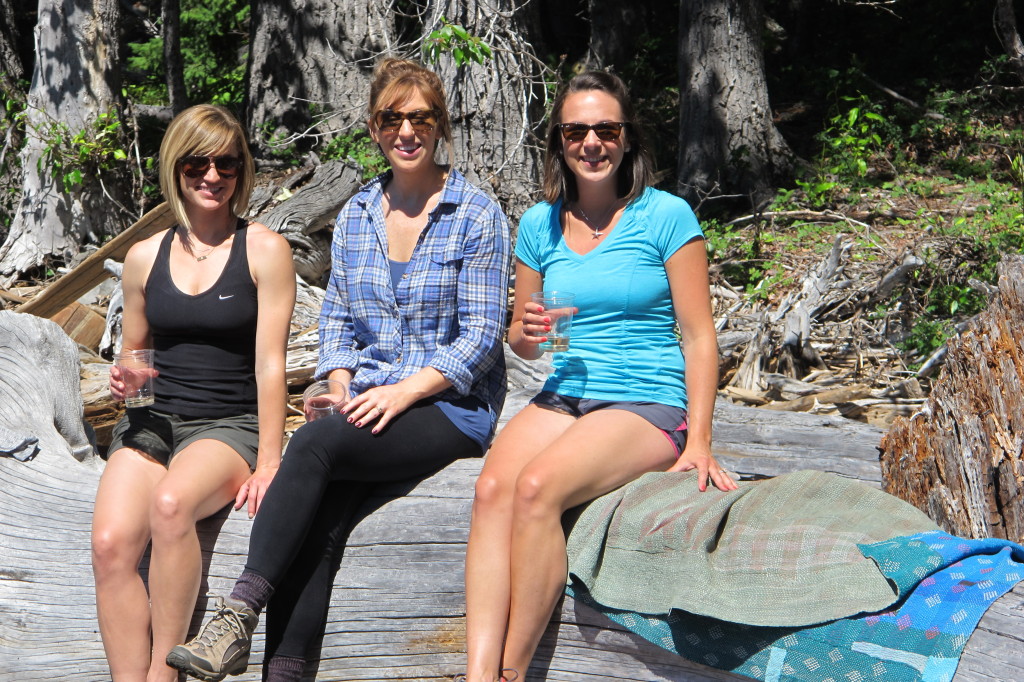 While Patrick and Ryan were perusing the shores, checking things out. Ryan decided to try his skills at jumping from a small stump/log to a huge stump. It did not work out well for him, as he did a slooowww mooottioonnn fall backwards right into the lake. He was fine and it provided a nice chuckle for the rest of us! 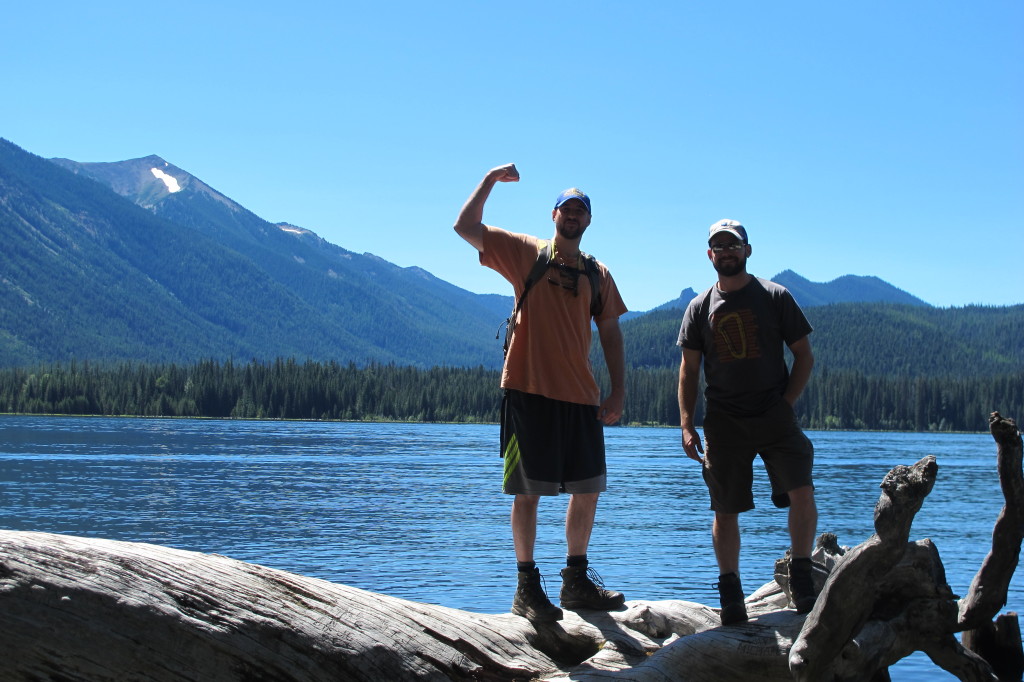 The weather was absolutely perfect this day {and the whole weekend}. We were all loving basking in the sun, overlooking the gorgeous lake. 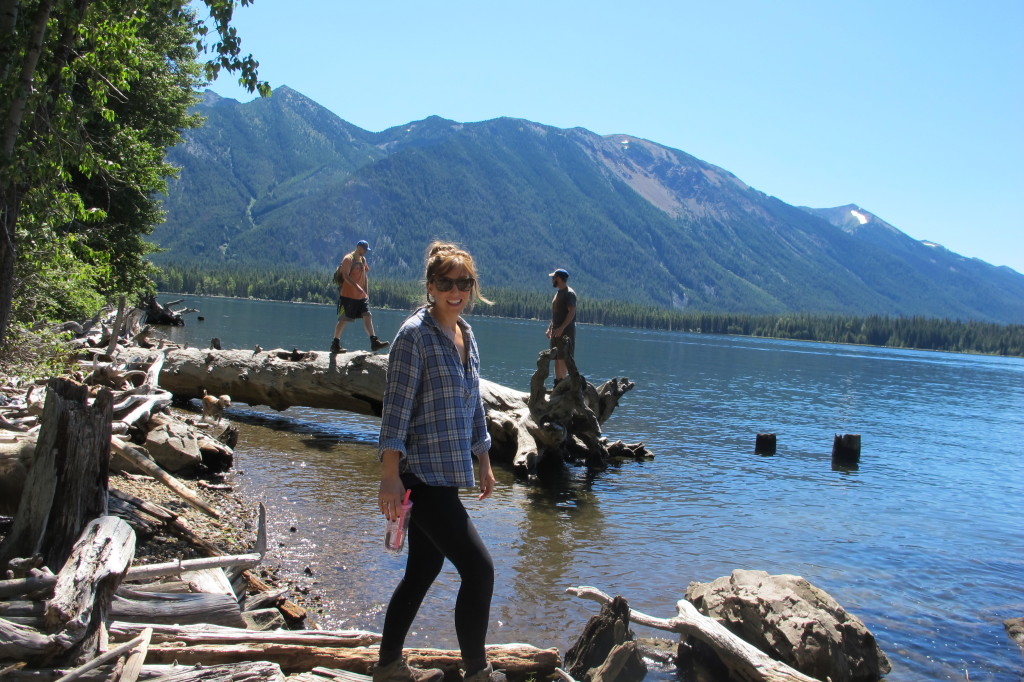 The dogs were in heaven. I think they swam for 3 hours straight.

Alex tried to convince the other guys to smoke a cigar with him but he was the lone smoker. They all indulged in a cherry seed spitting contest, though. I never heard who won?

All good things must come to an end, though. Eventually we mustered up the energy to walk back to the car and head to our campsite to eat some lunch.

Once we got back the boys decided to put up the canopy tent that Alex and I had just purchased before the trip. We got the canopy in case of rain so that we all wouldn’t have to retreat to our own tents. This canopy is huge – it’s 11′ x 11′ and about 8 feet tall, plus it has screen walls that zipper shut, which was a saving grace from the bugs. It made a great party tent! 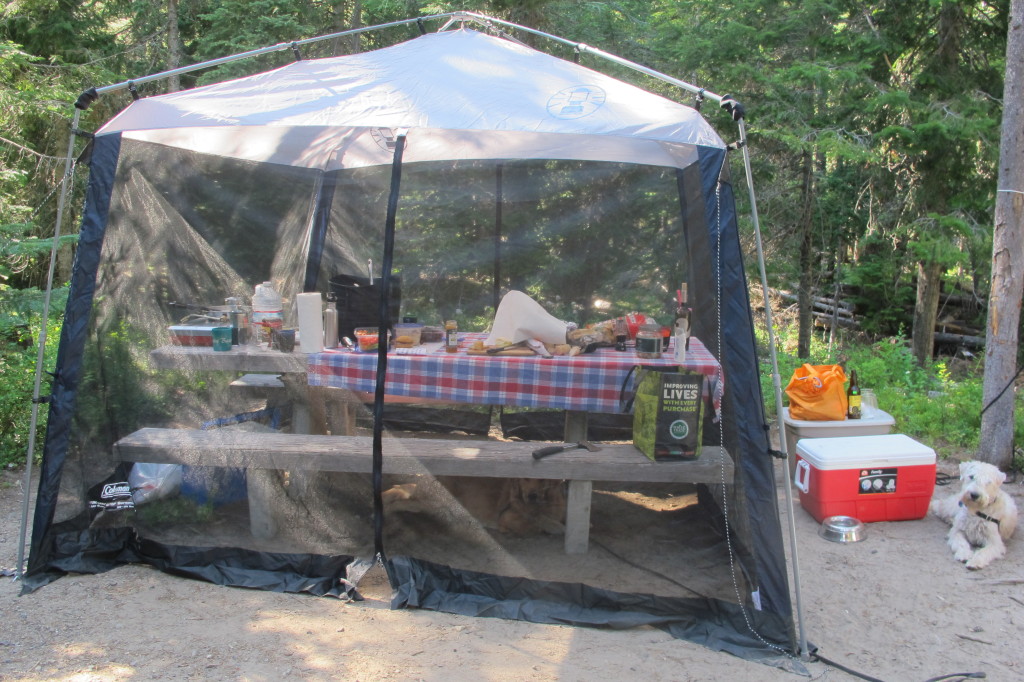 The canopy has bold verbiage on the bag that says “Set Up in Three Minutes or Less” so that was one of the selling features that drew me towards it. I always seem to forget how to set up a tent so easy is good! As it turns out, it took two engineers and a doctor 45 minutes to put up the damn canopy. Perhaps if someone would have read the instructions it could have taken 42 minutes off the setup time… Just a thought…

We ended up loving the canopy! It felt like our own little private space. We set it up to enclose the picnic table. It worked out so well we didn’t really leave the tent after we got it set up. 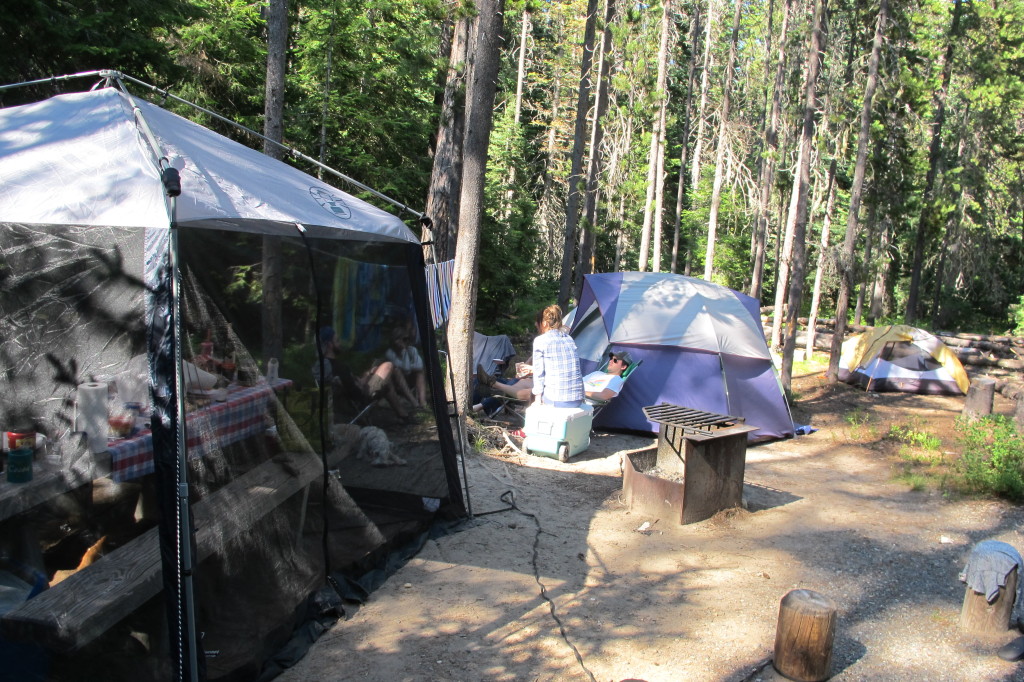 Carrie and Patrick were on dinner duty that night and prepared us a hearty meal of brats, beans and potato salad, then we snacked on her yummy monster cookies for dessert {ok, all day!}. The rest of the evening was spent playing card games in our party canopy until we were finally ready for bed.

Sunday morning came bright and early and quickly showed us it was going to be another gorgeous day. After eating pancakes and bacon we broke down our tents, packed up and hit the road. Before our trip Carrie had requested that we not rush out of the campground and head home right away – she wanted us all to do something on Sunday, too, so that the weekend felt longer. Since we were so close to Crystal Mountain we ended up going on a hike there.

Alex and I had previously hiked from the base of Crystal up to the top of the gondola tower and I remembered it was a challenging hike, but boy, this was pretty strenuous, plus it was hot out and there’s not much shade.

It is always fun to be at Crystal in the summertime because you’re reminded of what lies beneath the snow that you ski on. It is so hard to believe that you can ski on terrain that is so rocky and jagged! There were some spots that literally had a creek running through it that freezes and gets covered in snow mid-winter that we ski over. 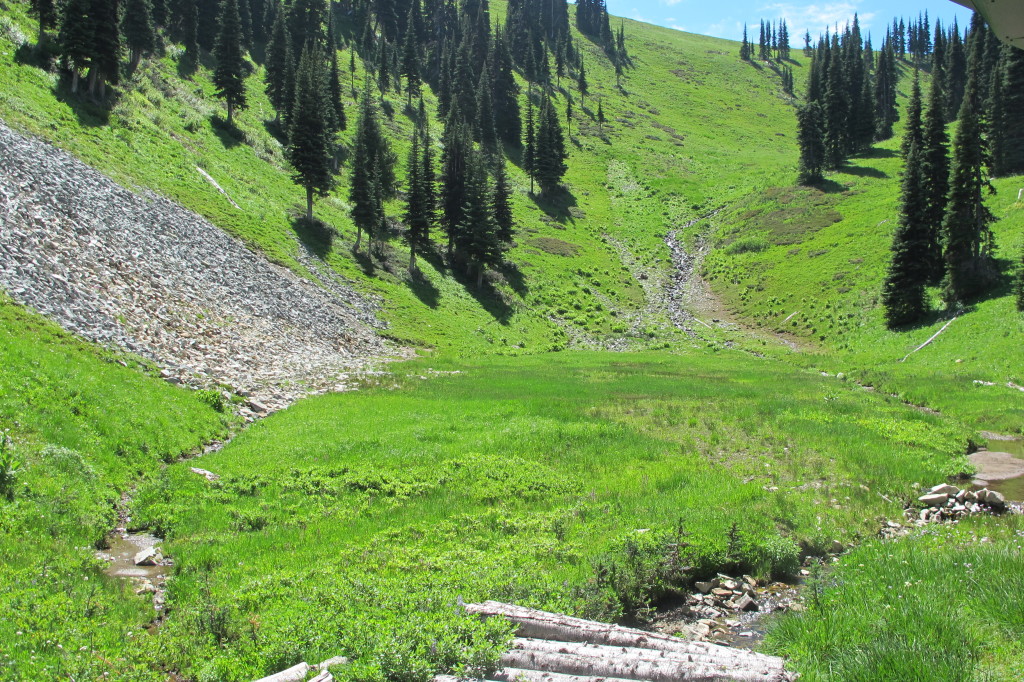 The dogs were in heaven during the hike. They both love being out in nature, but you could tell by the middle of the hike they were ready to be done. It really was quite warm for them {and us!}. 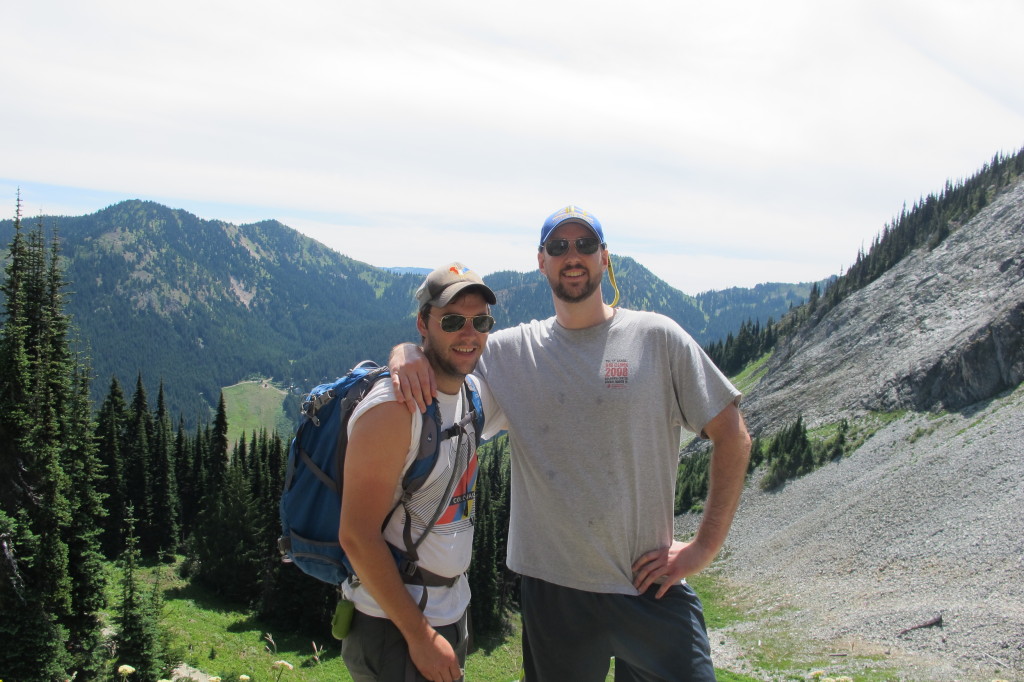 It’s safe to say we had a great time hiking, exploring Crystal in the summer and just spending time with each other. 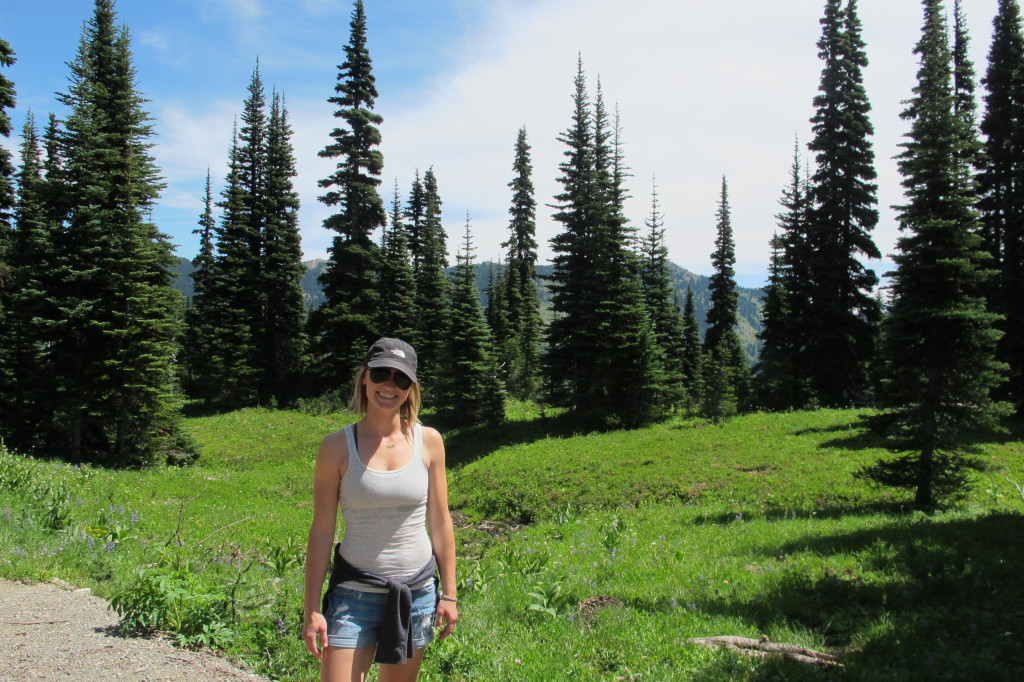 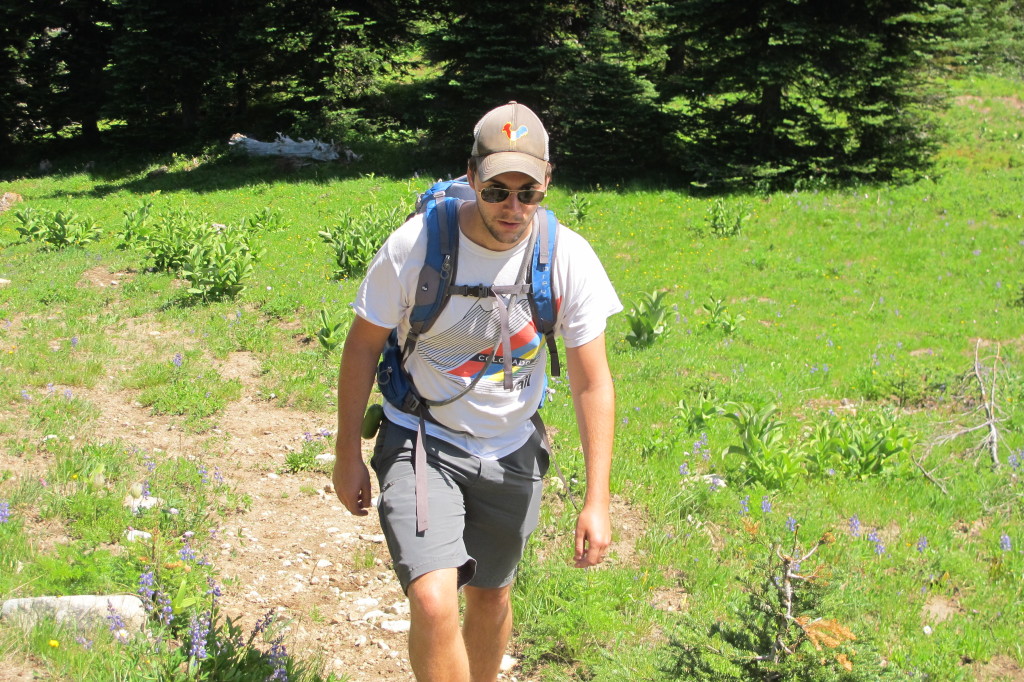 The view at the top was well worth the work! 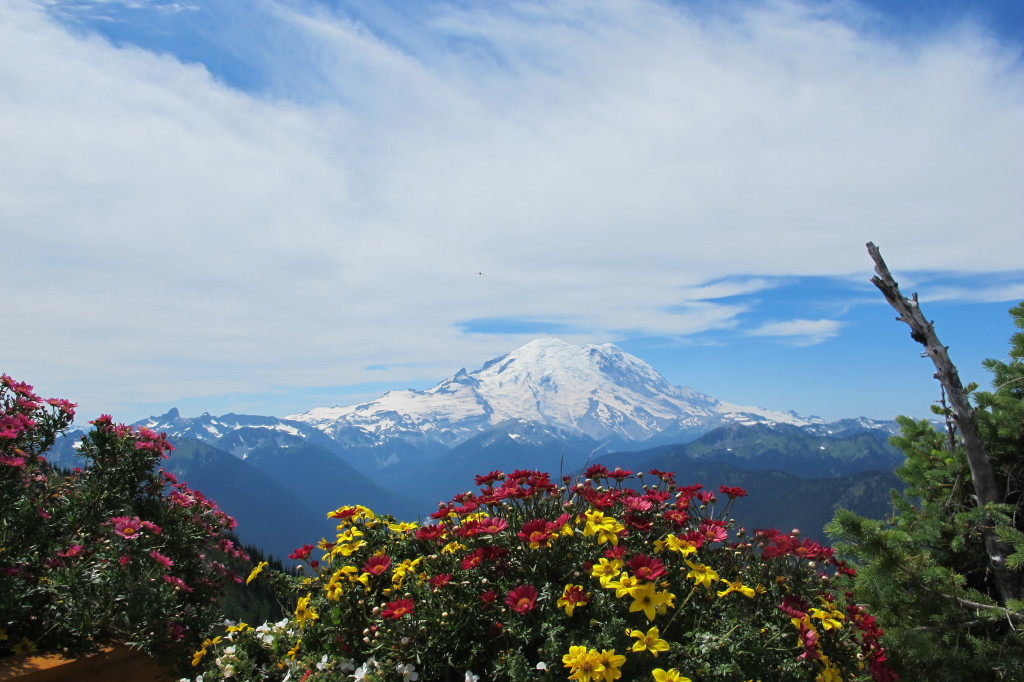 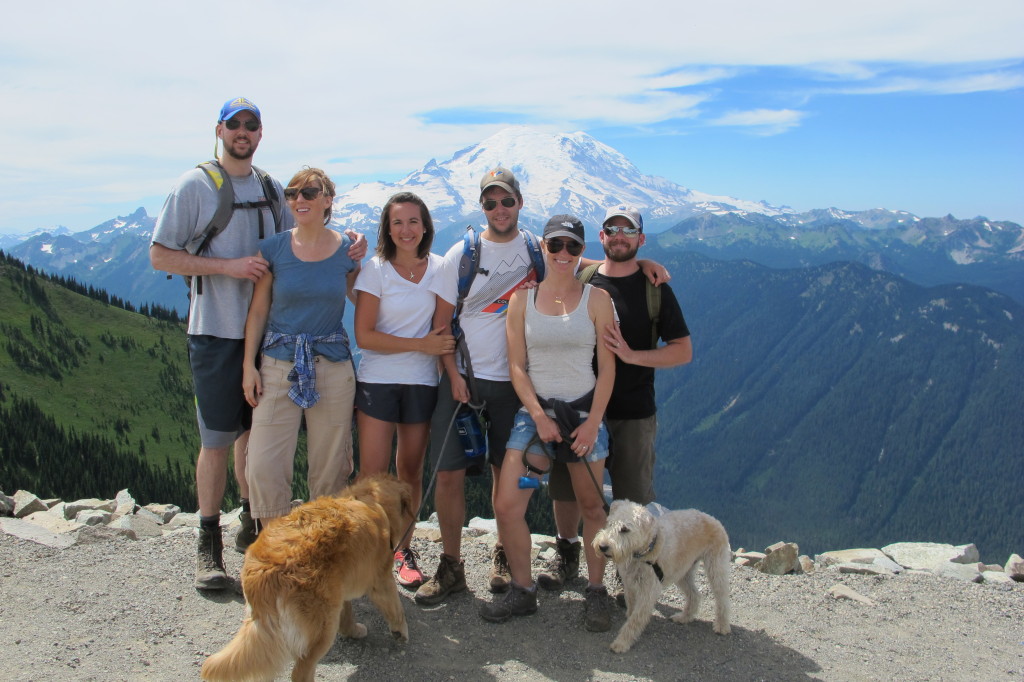 We are so thankful for having such good friends and for living in a state like Washington. There is endless beauty where we live and we are so lucky to live here.