Alex’s cousin Bryan and his bride to-be, Sarah, just came out to Seattle for a long weekend visit us. Alex and I went to college with Bryan at Iowa State, so I know him quite well. It was a treat to get a chance to spend some time with Sarah since the two of them started dating after Alex and I left Iowa State and we haven’t had many opportunities to get to know her. Bryan and Sarah arrived on Thursday from Chicago and brought some terrible weather with them. Thankfully we didn’t let a monsoon ruin our fun weekend.

Once they arrived, Alex took them downtown to do some tourist things, like see Pike’s Place Market and walk around, but the weather was so bad that they came back to our house pretty quickly. Later that evening we went up to the Bottlehouse to show Bryan and Sarah our neighborhood. They all split a bottle of wine while I had some hot tea since I was under the weather from earlier in the week.

On Friday the crew headed out for Crystal Mountain to get a day of skiing in. There was a bit of fresh snow on the ground and no crowds, so it was a day full of great skiing. I wish I could have joined them on the mountain but I still wasn’t feeling well enough.

No different from college, we spent all day Saturday drinking. We started the day off on Saturday with brunch at home. I made ham and egg cups, along with muffins, fruit and coffee and we lingered for a while before driving out to Woodinville. Our first stop was at Red Hook Brewery. We grabbed a table and had some lunch while watching the beginning of the Seahawks game. After our meal we took a tour of the brewery. The brewery tour comes with a beer tasting portion and everyone was feeling pretty good after that!

Now that everyone’s bellies were full of beer and bar food, we ventured up the road to a winery that we had never been to. Our first winery was Gorman Cellars, right in the heart of the tourist district. I was still not feeling 100% so I didn’t taste any wines, but it sounded like everyone really enjoyed the wine. Once the tasting was over we went next door to Patterson Cellars to do another tasting. I really like Patterson and was disappointed that I wasn’t able to try the new wines on their tasting menu. Safe to say, we’ll be back!

After a full day of drinking, we decided to cap it off by going to a cocktail bar. Why not!? We went home for a quick siesta and then grabbed an Uber {taxi service} and headed for Capitol Hill. Our first stop was at Le Zinc, a French restaurant with a swanky cocktail bar. The bartender there also works at Bottlehouse, so it’s fun to visit him in a different element. I had Chris make me a hot toddy, which was fabulous, and Alex and Bryan had a spin-off of an old fashioned, while Sarah had a whiskey ginger, but with ginger liquor instead of ginger ale.

We moseyed a few blocks away to Quinn’s for a late dinner. Alex and I love Quinn’s. It’s a restaurant that has some “normal” food like a burger and chicken, but then they have more “foodie” options like wild boar sloppy joe or bone marrow. Everything we’ve had there has been fantastic. It’s a fun place to take out of town guests who are up for trying something funky.

After a good night’s sleep we woke up and had our final stop on the tourist train. We took Bryan and Sarah to the Hi Spot Cafe, our neighborhood brunch spot, this morning. It’s always a favorite of our guests. 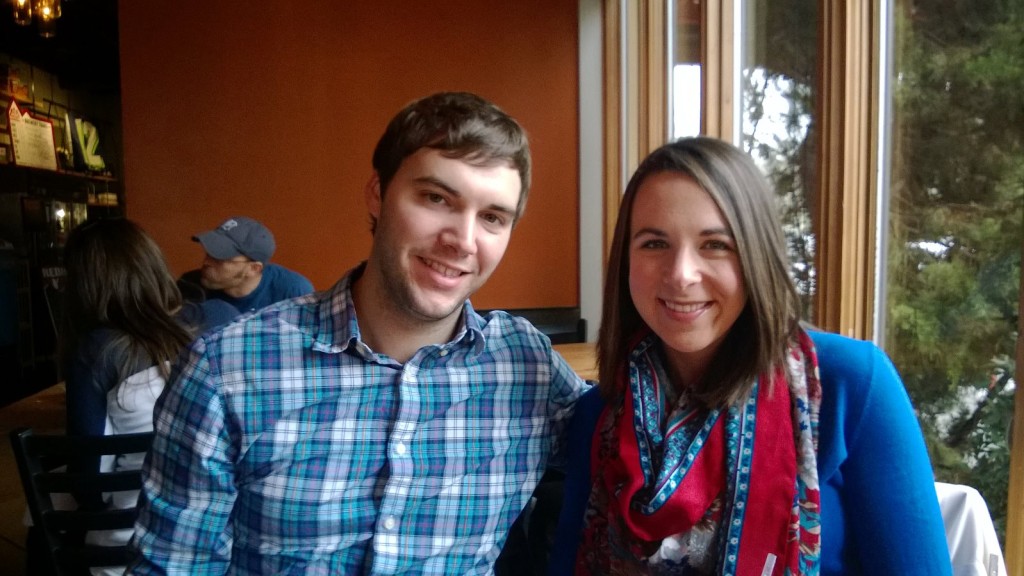 It was a great weekend with Bryan and Sarah! We had a great time showing them our city and neighborhood and look forward to seeing them in August at their wedding.