On Monday after we got home from our Leavenworth trip we could tell that Ben was coming down with a nasty cold. This cold came on fast and furious and resulted in a trip to the emergency room. 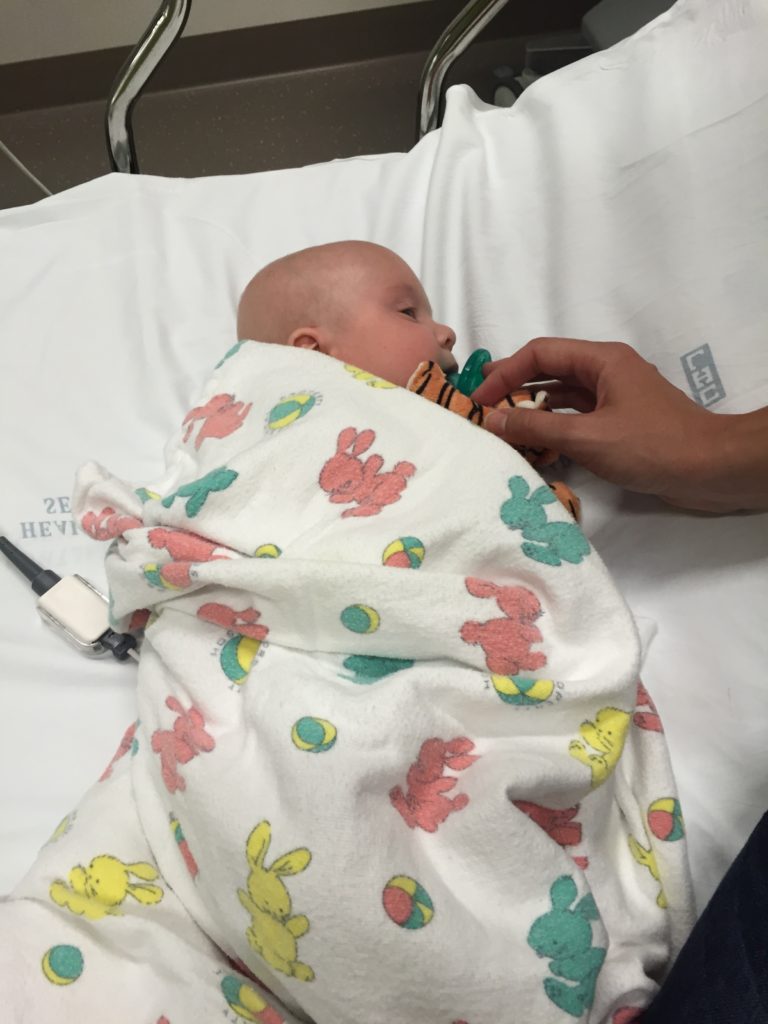 One of the bummers about Ben being a preemie is that when he gets sick he’s at a higher risk of developing pneumonia and it’s a much bigger deal for him to get a cold than a full-term baby, or even a baby born after 34 weeks gestation. Upon discharge from the NICU in June his doctor said the longer it is before Ben gets his first cold, the better. His lungs didn’t have the chance to develop like a full-term baby’s would have, and even though I got the betamethasone steroid shot at the end of my pregnancy to help develop his lungs, it’s my understanding that was to avoid serious respiratory distress upon delivery.

Anyway, on Monday afternoon when we got home we noticed Ben was really lethargic and not feeling well. He got lots of cuddle time with both of us. As the day went on we started noticing Ben was having trouble breathing and ultimately stopped breathing at one point. There was so much mucus in his nose and mouth that he couldn’t control it or breathe through it and kept choking on it. We’ve had many, many, many experiences with Ben where he’s stopped breathing {while eating} and knew what to do. Because of that, though, we decided a trip to the emergency department at Seattle Children’s was in order.

Ultimately, we got sent home after a few hours of monitoring. Ben screamed his head off during his examination and somehow that seemed to help clear out some of the congestion and ended up being the trick!

Being back in the hospital for Alex and me was something we’d really like to avoid again. The sound of the machines beeping brought back so many unpleasant memories from when Ben was in the NICU. I’ve heard people talk about PTSD after a NICU experience and hearing the beeps from the machines sure triggered whatever PTSD we have.

Since Monday Ben has been doing much better. He’s been in a surprisingly good mood given that he’s getting over a cold. He even slept through the night fully twice and made it 30 minutes from our cutoff of what we’d consider sleeping through the night {5 a.m. or 8 hours – he made it to 4:30 and slept 7.5 hours} another night! {Let me tell you – it was incredible getting a full 8 hours of uninterrupted sleep for the first time in around 5 months!}

In the end, Ben is fine, but it’s making us realize that we really do need to go back to being paranoid parents of a preemie. It’s a hard line to tow to figure out how “normal” of parents we can be versus how cautious we need to be. But, cold and flu season is upon us, and we’re not taking any chances with our kiddo.