Happy Halloween! Our little dinosaur is officially five months old! This last month has been filled with big developments and exploration from a curious Ben. Every day he continues to change as he explores his surroundings and gets more and more mature. The time is going so fast and Ben’s development is really ramping up. I’ve heard from so many friends with kids that around four months it starts getting much more fun – I swear it gets more and more fun with each day that passes. 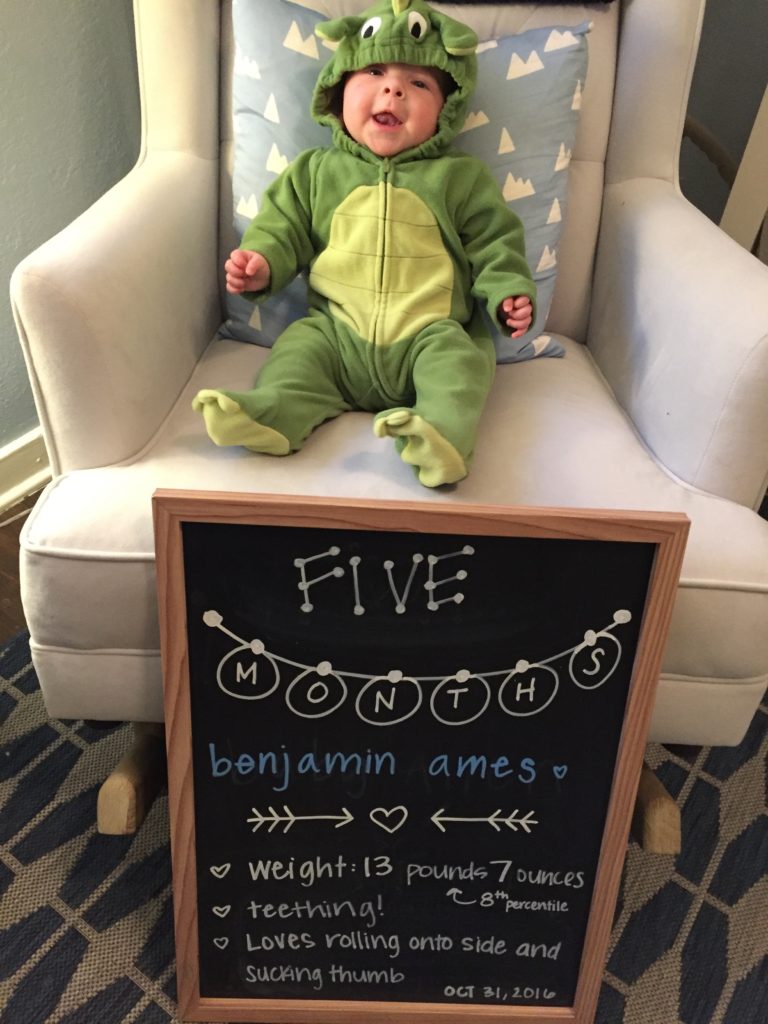 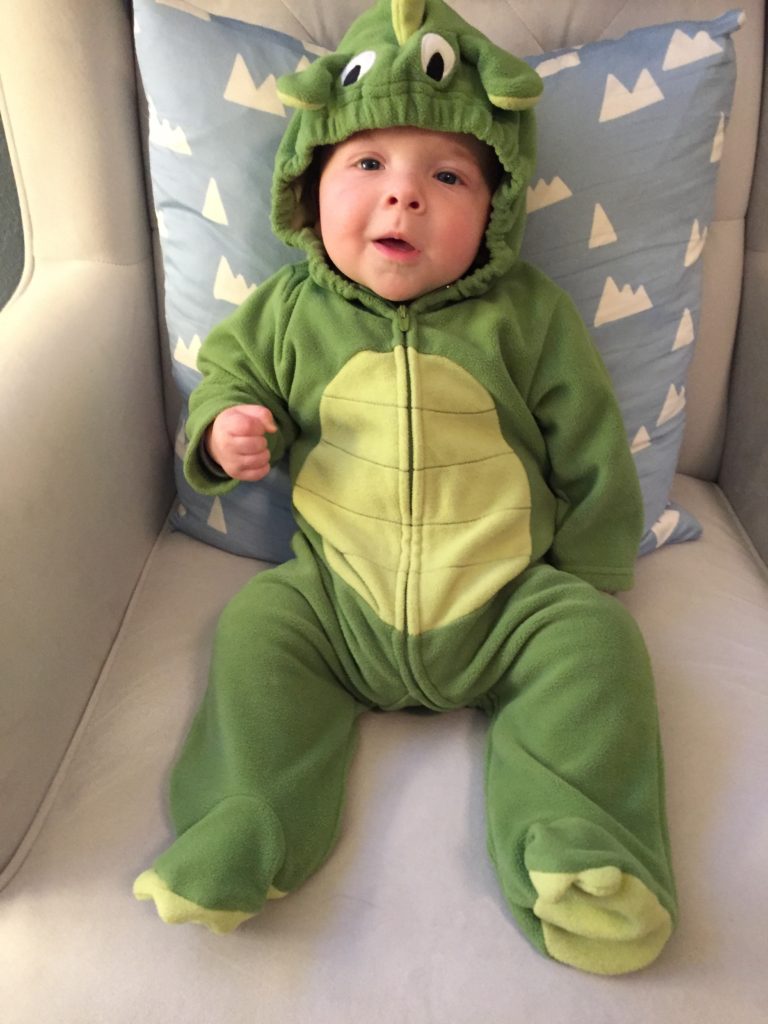 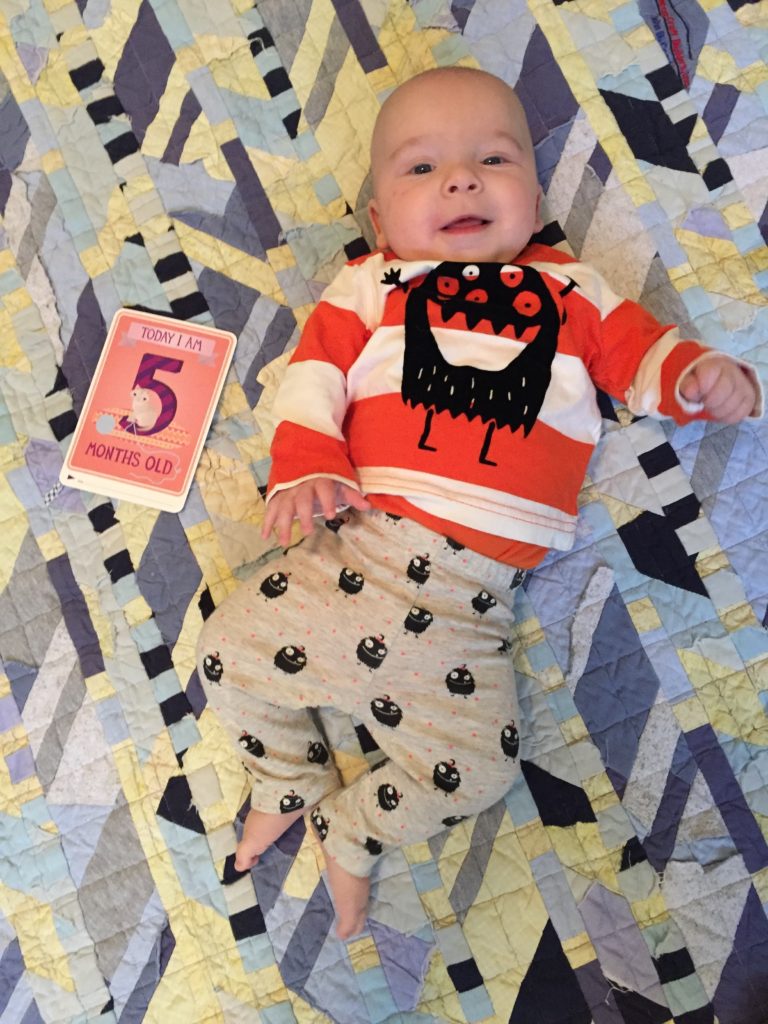 One of the cool things going on with Ben is that he’s getting more hair. We’ve noticed almost on a daily basis for the last two weeks that Ben’s hair is really starting to fill in and get darker. His eyes are still blue but lately we’ve been thinking in certain light that they are starting to change colors. It would be surprising if he kept his blue eyes since both Alex and I have hazel! 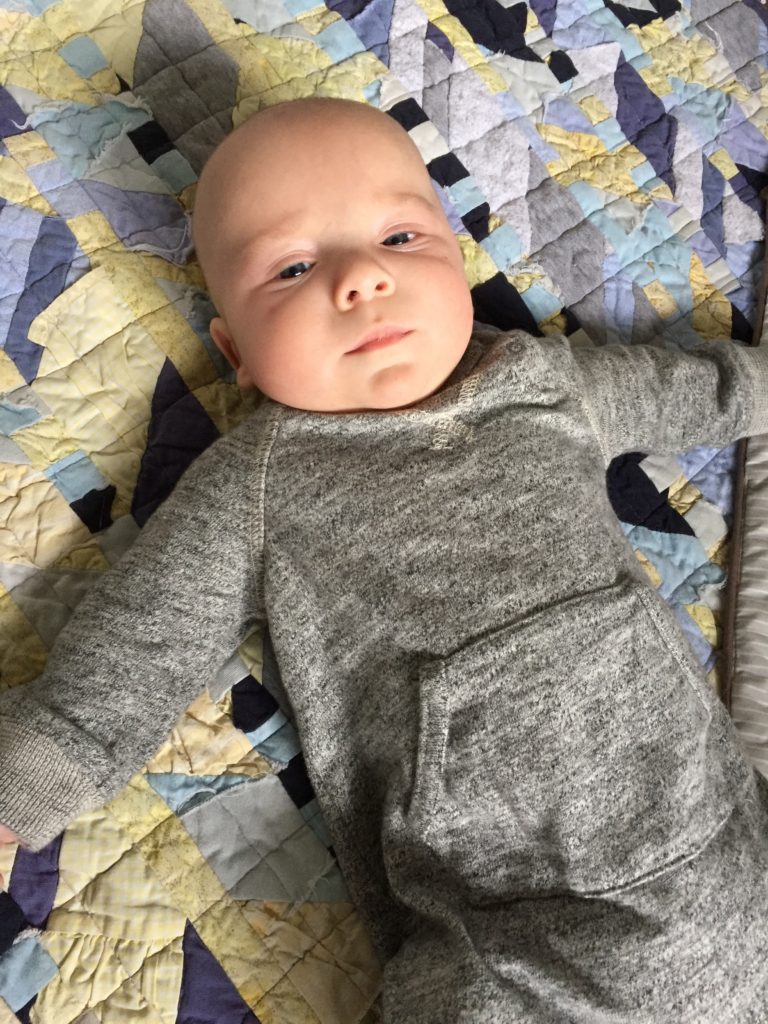 The last month we have seen a major change in Ben’s sleeping habits. Ben has been inconsistently sleeping through the night {3-4 nights per week} for about the last month, but in the last week he slept through the night almost every night. Right around the transition from 3 to 4 months we adjusted Ben’s bedtime. He now goes down around 7ish – we feed him, put him in his jammies, read him a bedtime story and then put him to bed. We’ve found that time to be the magic hour for Ben – earlier and it’s too early and he screams his head off, later and he’s so tired that it’s impossible for him to settle down and go to sleep. We are still feeding him again {while he’s basically asleep} at 10 and then he usually sleeps until 6 or 6:30. It has been really nice for us to get to eat dinner together and then either have time to spend together or getting a few things done in the evenings.

During the day Ben’s naps are evolving too. He wakes up at 6:30 a.m. and hangs out for an hour to an hour and a half then takes a 30-60 minute snooze. From then, he’s up until close to 10:30 a.m. Lately he’s been taking his long nap in the morning and then spends most of the afternoon awake with one to two short naps before his dinner at 6ish. 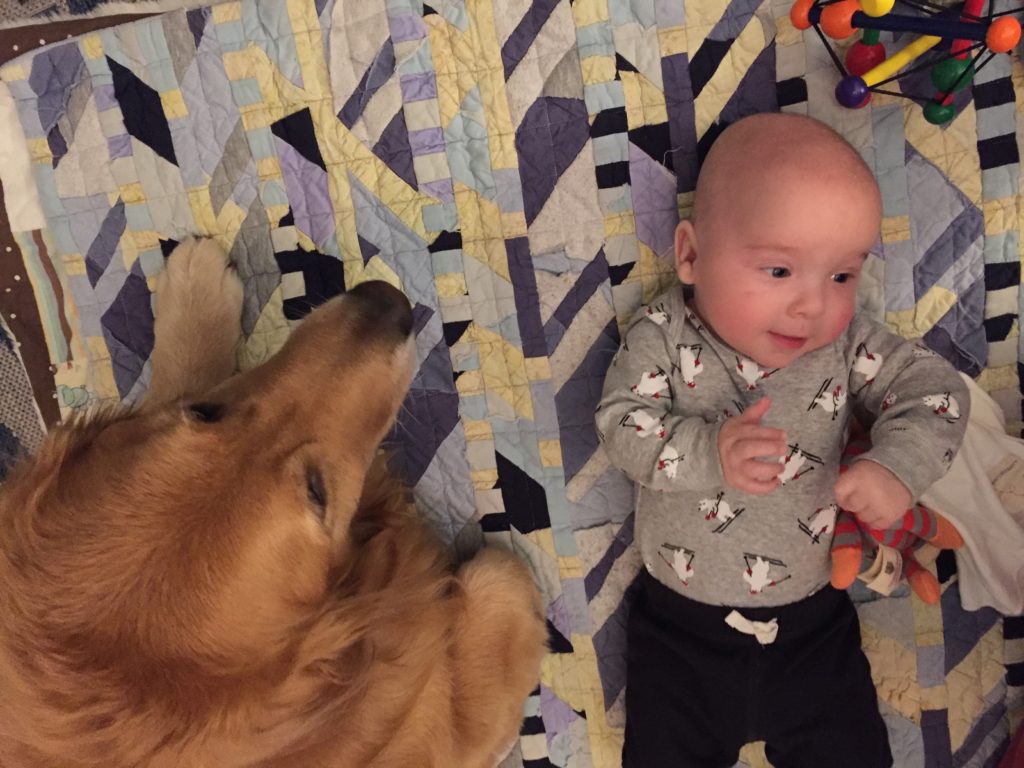 We’ve found a really great routine for feeding Ben and for his naps. It is fairly flexible depending on the day and it works really well for our family and gives us a bit of predictability.

Ben has been eating really well lately. As soon as the level 3 nipples arrive from Amazon {hopefully today!} we’ll test them out with him. They have a little faster flow. Right now Ben is eating up to 6 ounces per meal and around 29 ounces {845 milileters} per day. We are planning on starting to introduce solid food to Ben in December, after he turns 6 months old. 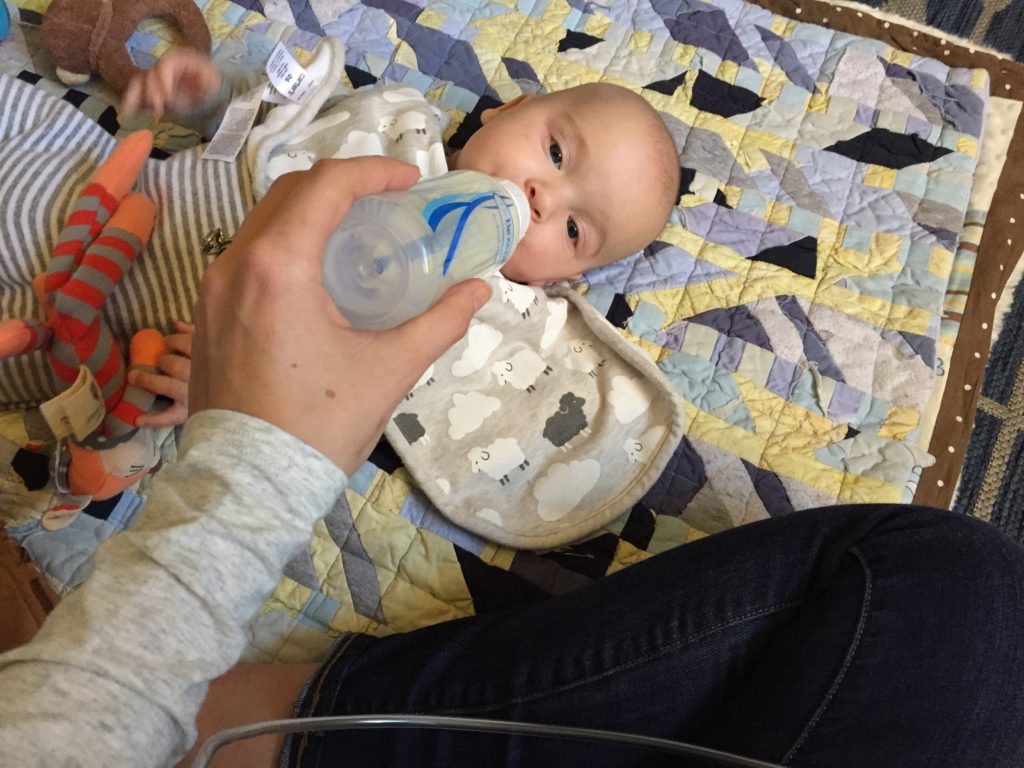 In other, more exciting news, Ben is working on sitting up! I’m fairly certain that unless it’s by accident Ben will be sitting up by himself before he rolls onto his tummy. He is so happy rolling from back to side that I don’t think he has any desire to get onto his tummy. Maybe that will change once he is able to grab things from being on his belly. For now he is only reaching for things on his side or back, but he will roll from back to side to reach for a toy. 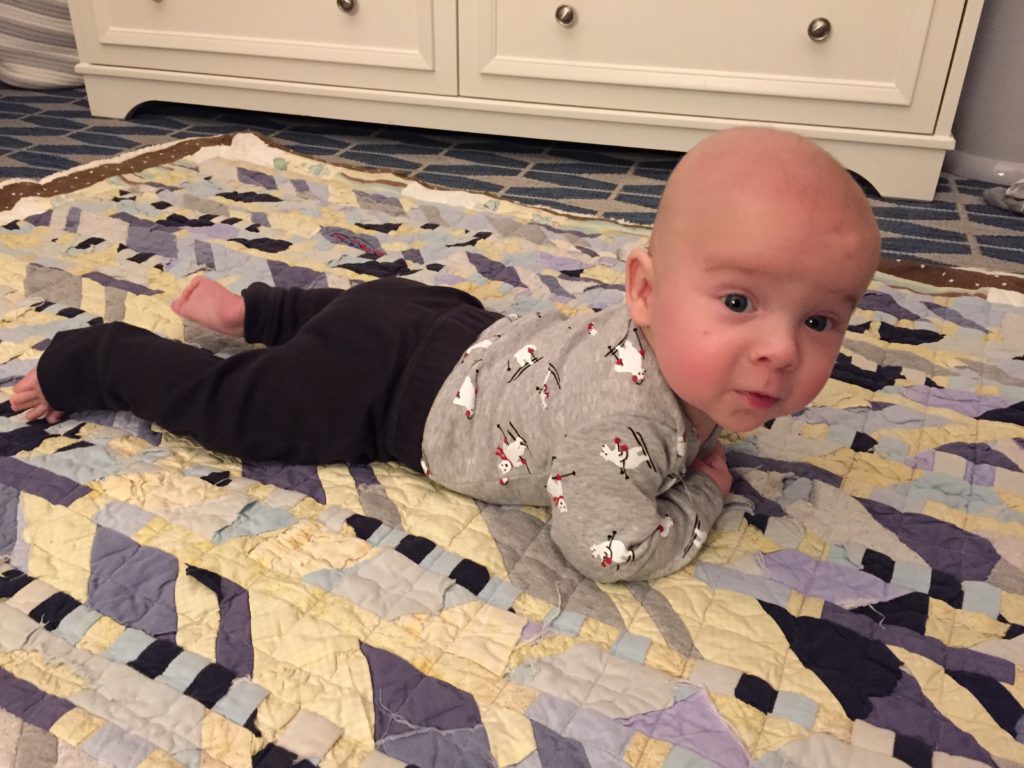 Lately {about the last week} we have noticed that Ben really strives to be sitting upright and can actually pull himself up into a seated position. He doesn’t quite have the strength to hold it unsupported for more than a few seconds but he is really working on it. 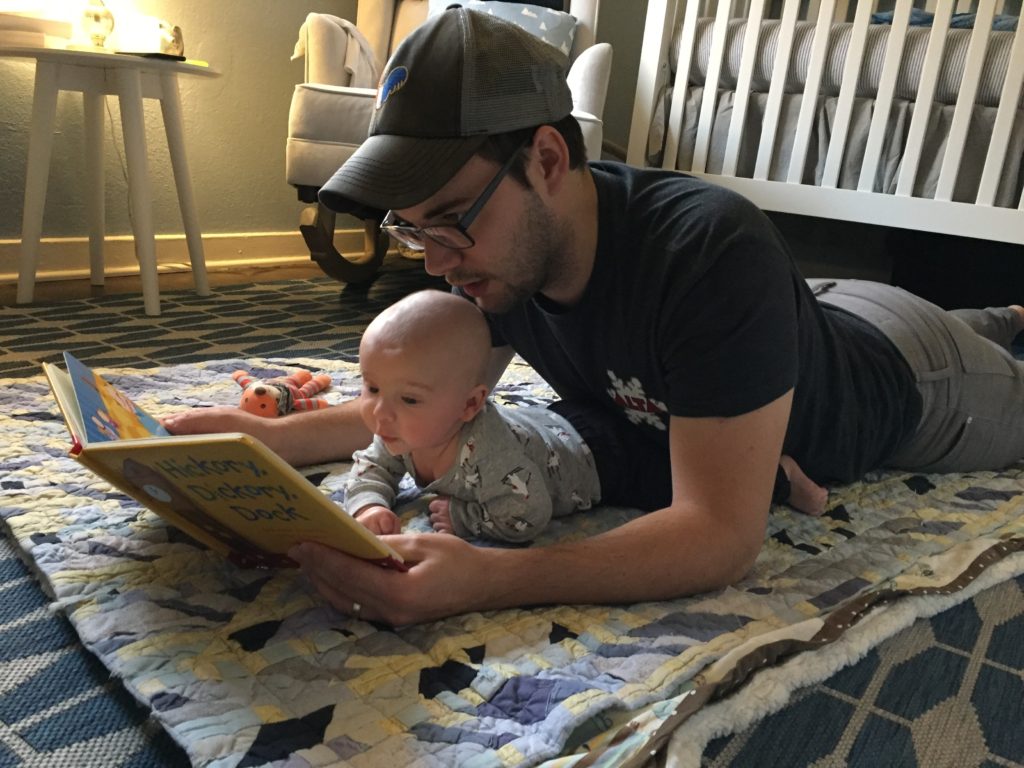 Ben is a super happy, laid back kiddo. He loves looking at himself in the mirror and playing “airplane” where you raise him up over your head. We are still desperately trying to get him to giggle – he’s done it once or twice and yesterday was making sound suggesting he was getting close… 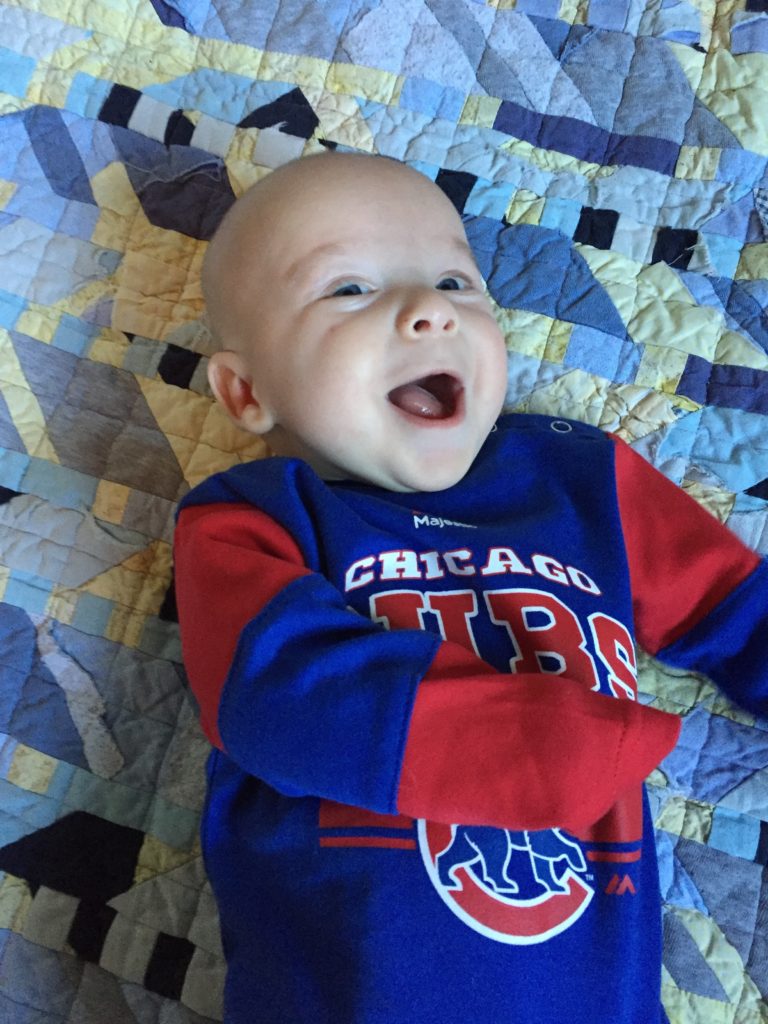 While there aren’t any teeth poking through yet, Ben is definitely teething! He’s got two little tooth buds that appeared about a week ago under the surface on the bottom of his mouth. It’s going to be so fun to see his teeth appear! For the most part he’s doing really well with teething but there have been a few days that he seemed really uncomfortable. He drools quite a bit and is obsessed with sucking his thumbs, fingers, entire hands or your hands. Sometimes he shows interest in teething toys and his pacifier but he calls the shots. 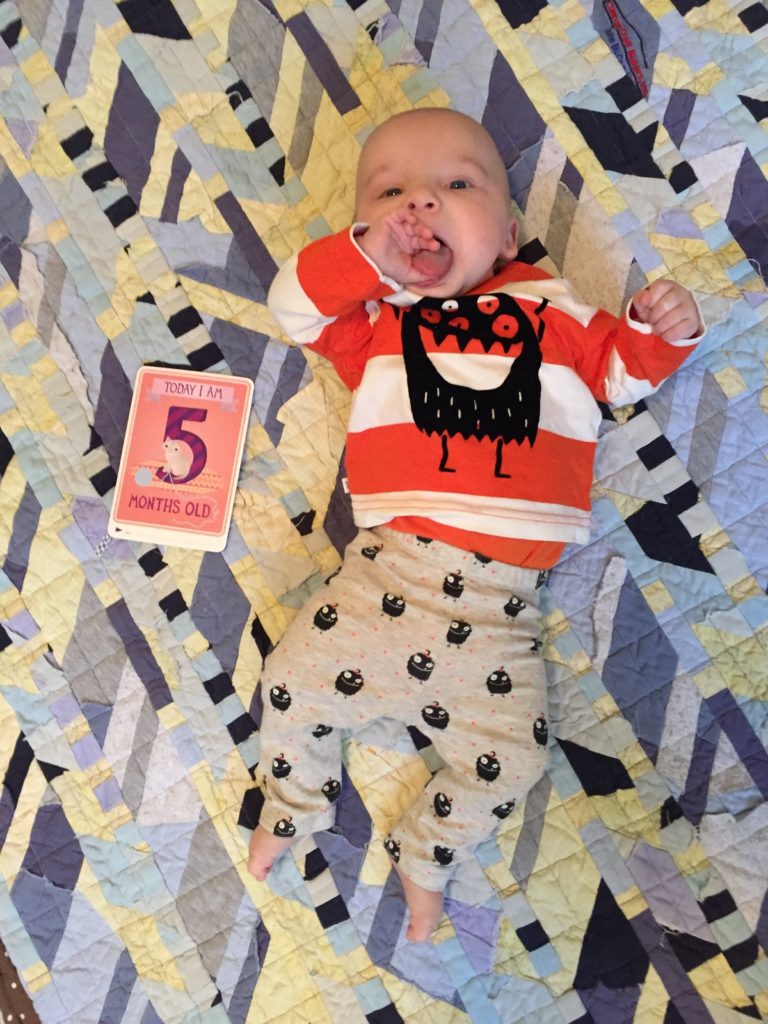 Ben is wearing 3-6 month clothes solidly now. He fits into that size in all of the brands that we have. A few things are a little long, but for the most part it fits really well. 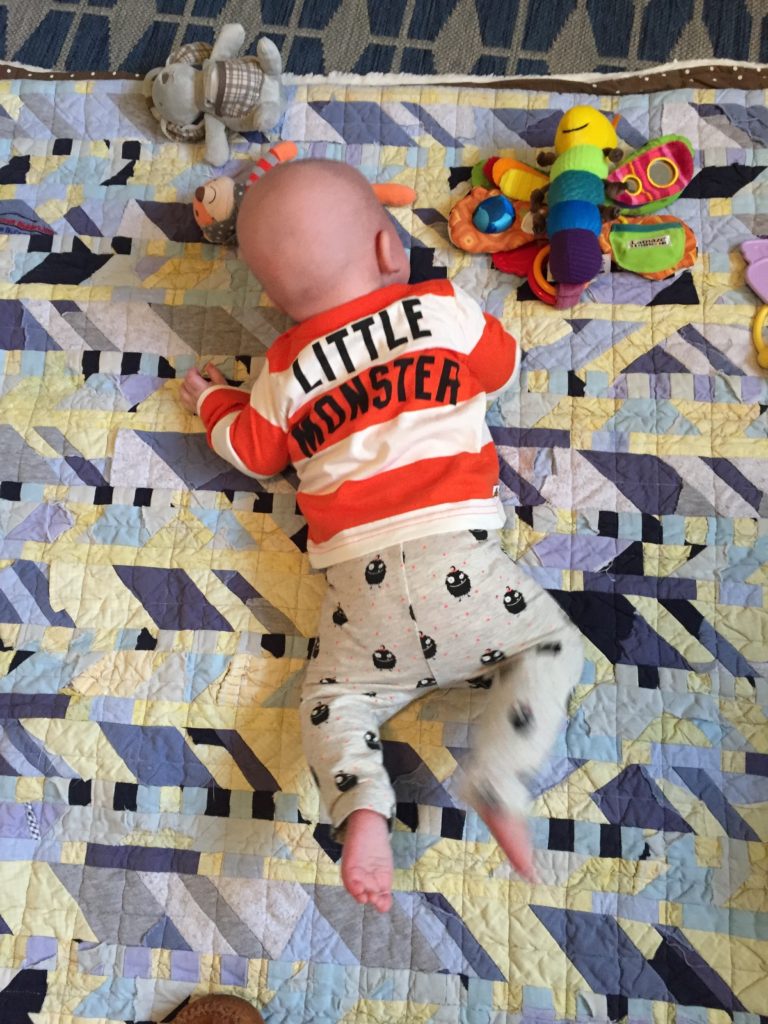 It has been fun to watch Ben outgrow various things over time. Most recently, Ben started boycotting the bassinet on our stroller and the inward facing baby carrier. We replaced the bassinet with the big kid seat for the stroller, so now Ben can look out and see the world. Our nanny pioneered the forward facing position in the baby carrier and Ben loves it – he never liked facing in with the carrier but he hasn’t complained about facing out. 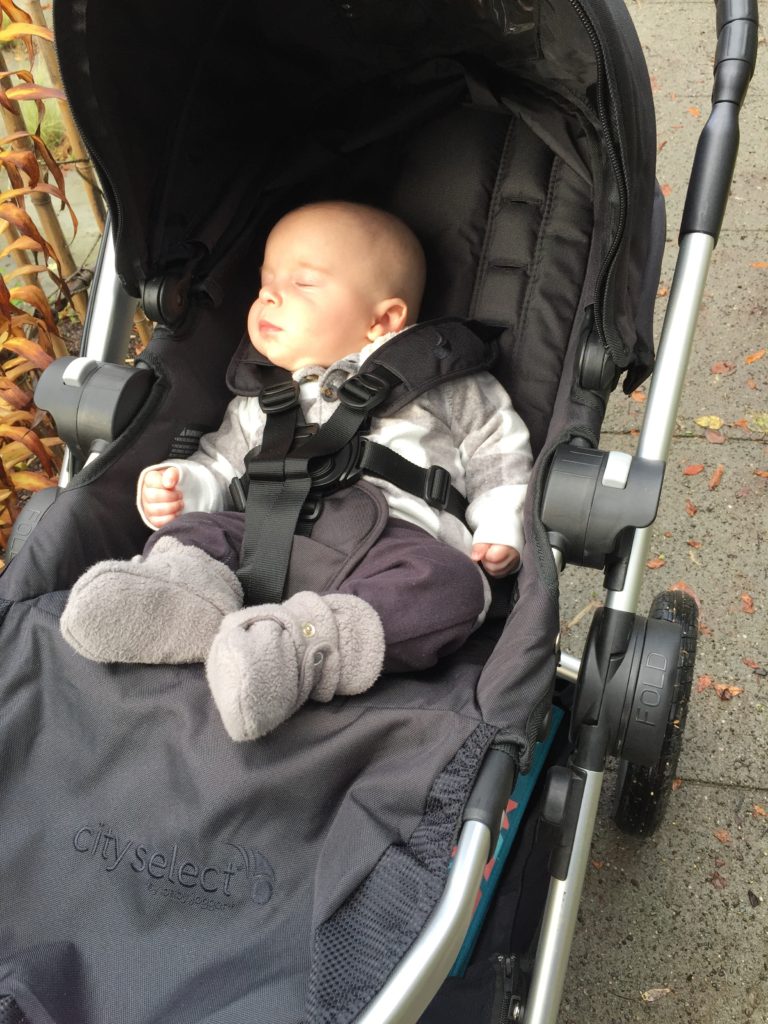 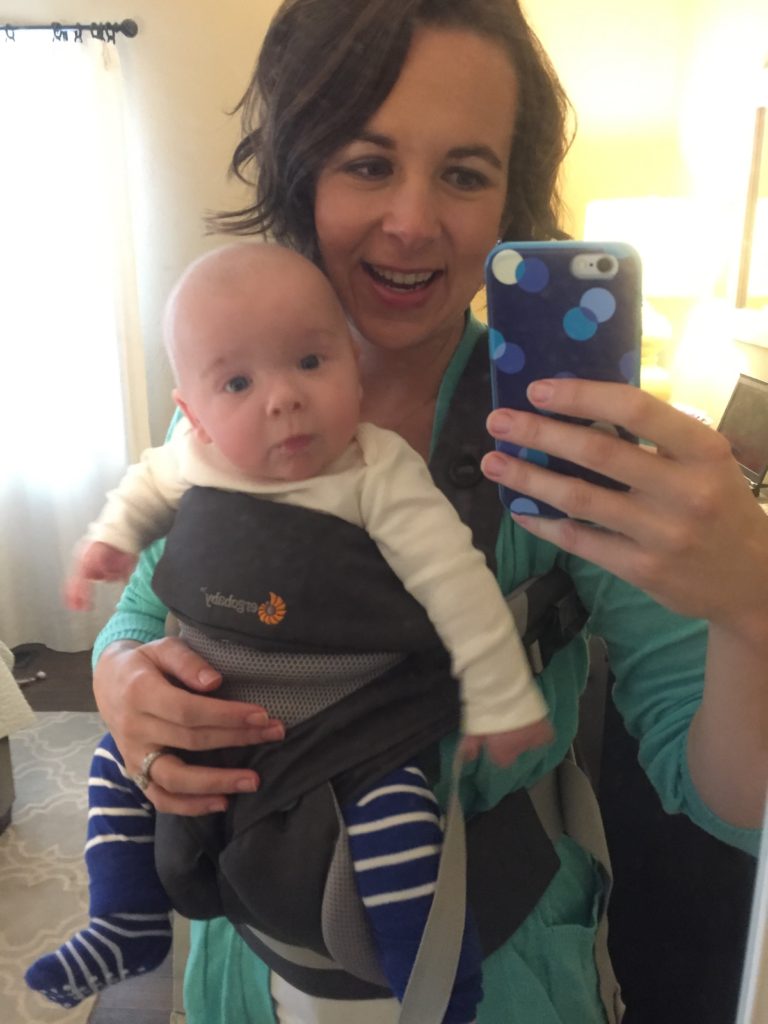 Lately Ben has been SUPER interested in books. That has been extremely fun for me – I love kids books, but man are there a lot of really dumb children’s stories. Also, I never realized how nonsensical and ridiculous nursery rhymes are, but they really are awful! Ben loves them – I think it’s the rhythm and the rhyming. Our new favorite is “The Barnyard Dance.” 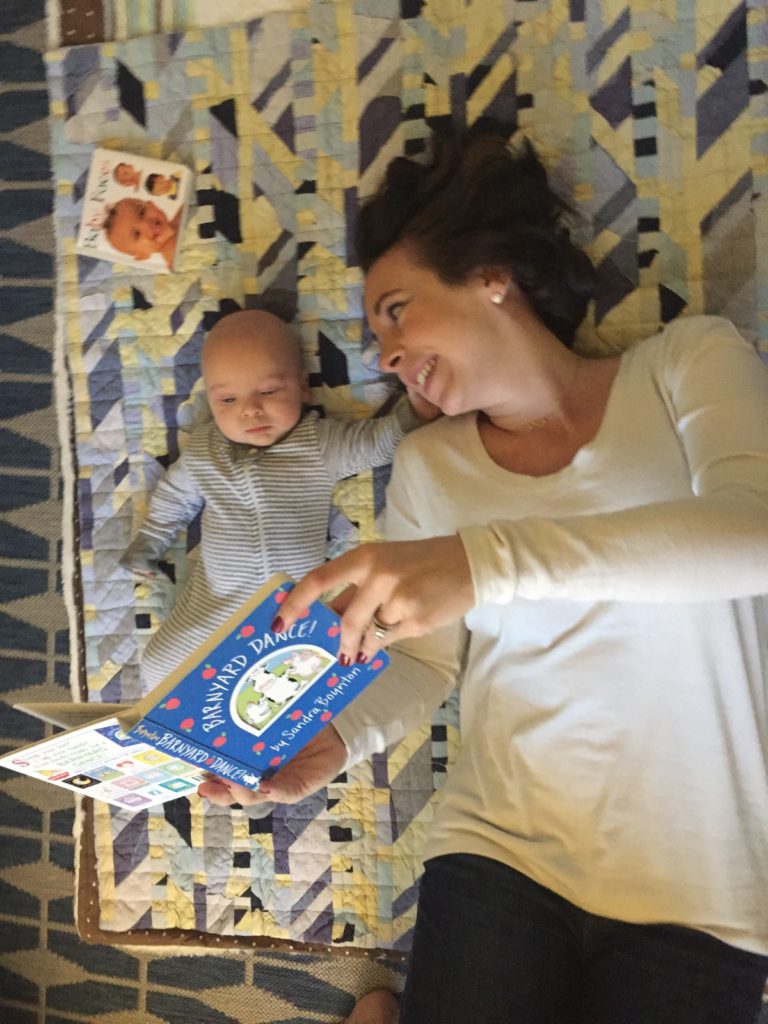 It has been such a fun month with Ben. He is doing very well and we are loving watching him grow and develop. It really keeps getting more and more fun!