The third country in our recent trip to Europe was Spain. We visited two Mediterranean cities in Spain: Barcelona and Alicante. First up, Barcelona…

After a long train ride from Zermatt, Switzerland to Geneva, a lengthy wait at the airport, a reasonably quick flight and an easy bus ride to the city center we arrived at our hotel in Barcelona late in the evening on a Saturday at the end of June. It was the perfect time to get checked in and grab a bite to eat since the Spanish enjoy eating dinner at 10 p.m.

We hadn’t figured it out quite at this point yet, but our hotel was situated in probably the most ideal spot in Barcelona. We stayed at the Portal de l’Angel hotel just off the Placa Catalunya, which we found out was the hub of the city center.

Upon check in we asked the receptionist for a recommendation for dinner that night. She pointed us to Bilbao-Berria, a restaurant closeby that serves pinxos {pronounced “peen-chose” – the letter “x” in Catalan makes a “ch” sound}. We had a great time at the restaurant. It is almost like the concept of a high-class cafeteria or buffet where you walk up to a very long bar and pick out which tapas you would like. Each pinxo comes on a skewer, then when you’re done with the dish you put your skewer in a little cup on the table and the waiter just counts the number of skewers you had to know how much to charge you. Some of the pinxos we had were skewers with meat, veggies and cheese, others were croquettes {basically fried mashed potatoes with some meat in them}, and sausages. It was a great introduction to Spanish food.

The next morning, our first full day in Barcelona, we didn’t have a huge agenda but wanted to check out some of the sights that were closer to our hotel. We set off for the Picasso Museum and got a chance to walk through that before it got too crowded. Both of us appreciated getting a chance to see Picasso’s works from an early age because it demonstrated his serious ability and showcased how he came to find his niche.

From the Picasso Museum we strolled around and wound up at Placa Catalunya, near our hotel, and at the start of La Rambla, one of the main tourist walking streets in town. Some say this is the heart of Barcelona, but both of us felt it was too crowded and way too touristy.

We ventured off La Rambla and came upon Placa Real {the royal plaza}, a big open courtyard with butter yellow buildings adorned with wrought iron balconies and beautiful palm trees in the center. The perimeter of Placa Real is all restaurants. We settled on a restaurant, Quince Nits {15 Nights}, and plopped ourselves down for our first Spanish lunch.

Much like the Italians, the Spanish love to eat and enjoy a laborious meal. Being on vacation we learned to love this, too. We found it quite enjoyable to settle in for a slow, leisurely meal once a day. In Spain, that leisurely meal was lunch, which is typically eaten between 2:00 and 4:00 in the afternoon, then a light dinner follows around 9:00 or 10:00 in the evening. Rarely did we eat dinner that late, but I can understand if you stuff yourself so much in the middle of the day all you want is a salad or fruit later in the evening. 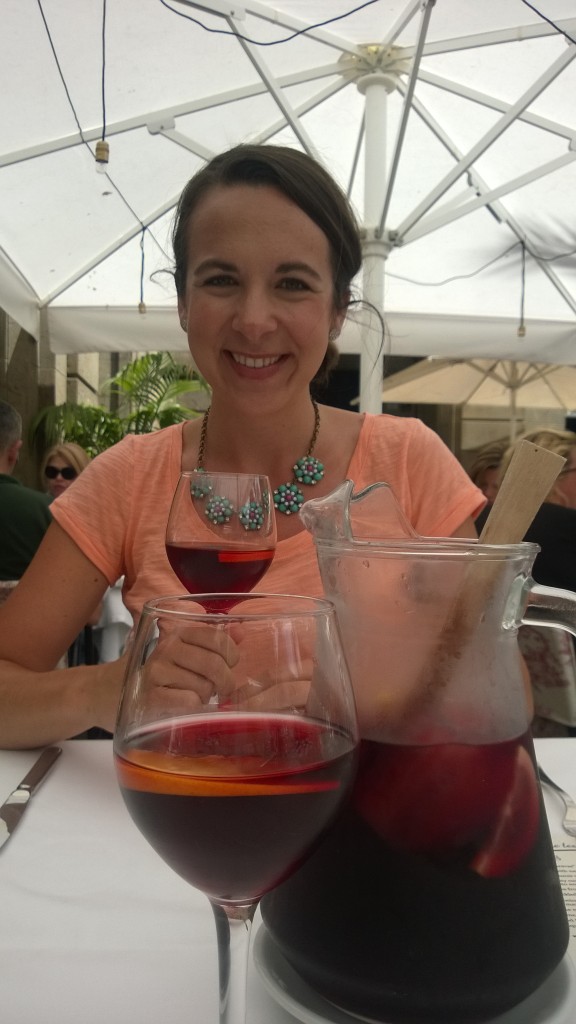 This meal in particular ended up being one of our favorite Spanish meals. We enjoyed a liter of incredible Sangria, then shared a variety of tapas, followed by a roasted duck breast and beautifully prepared pork tenderloin.

After lunch we strolled through el Barri Gotic {the Gothic Quarter neighborhood}, stopped for ice cream and retreated to the courtyard pool oasis back at our hotel. 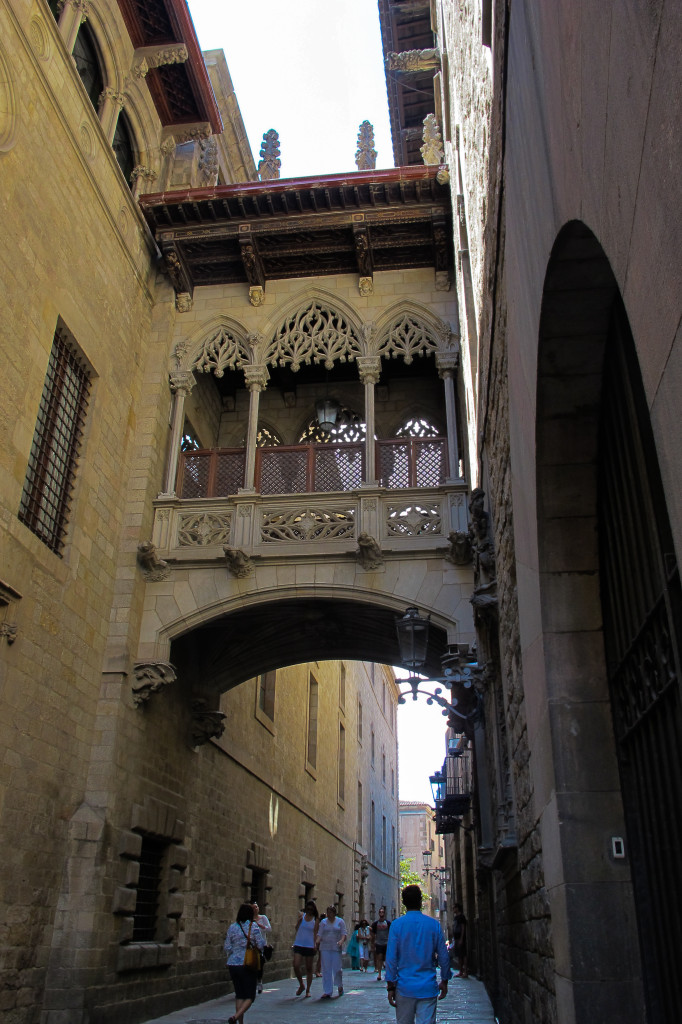 We had completely forgotten that this little section of paradise existed so we were extra happy when we were able to take our first siesta outdoors next to the pool. It was perfect.

Thanks to our siesta, we were well-rested and ready for an evening on the town. We had tickets to see a flamenco show at the renowned Palau Musica, an absolutely stunning music hall. We arrived a little early for the 9:30 show so that we could see the stained glass while it was still light out. Before I get ahead of myself, we stopped for an “early” {8:00 p.m.} dinner of tapas and wine at Ohla, a gastropub, which was awesome, on our way to the show.

The flamenco show was something we are glad we saw but wouldn’t be in a hurry to see again. It was a fun experience but the best part was seeing the stained glass inside the Palau Musica.

Our second day in Barcelona was one we had been looking forward to for many weeks prior to the trip. This was the day we had signed up to take a tour of one of our favorite wine regions, the Priorat. We met our guide and trip companions at 9:00 sharp and made our way through the Spanish mountains {the Monserat Range} about two hours until we reached the rugged, beautiful Priorat.

The wine tour was awesome, to say the least. We drank our way through three wineries and sampled around 15 wines over a 12-hour period. Each winery had its own way of doing things and we appreciated the variances among the wines. It was one of the major highlights of our whole trip and warrants its own blog post… Stay tuned! 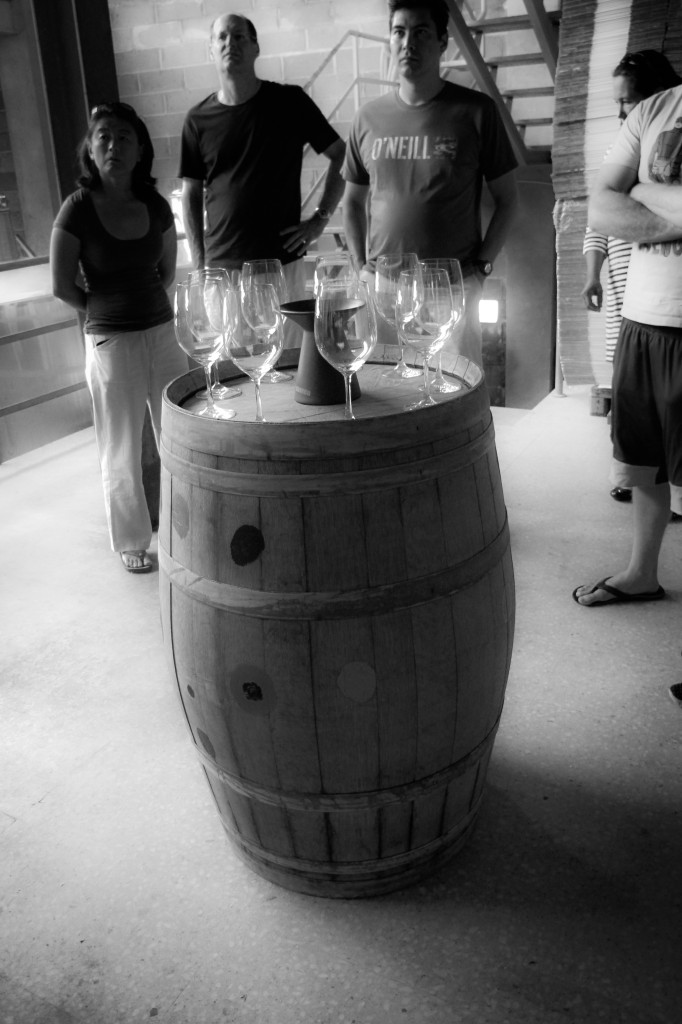 After drinking for 12 hours neither of us was particularly interested in going out to dinner. Thankfully we were on the same page and decided to order room service and watch a movie. Luck was on our side when the movie Knocked Up was just starting as we turned on the TV in our hotel room. Both of us were very happy to have a low-key night at “home.”

The next day was our last full day in Barcelona. We had a lot of ground to cover so we decided to do a hop on/hop off bus tour of the city. It is not something that either of us had ever imagined doing but we were very glad we did it. We got to see a vast part of the city that we otherwise would not have seen, plus it was just awesome to be riding around in the sun on the upper deck. We stopped at the Sagrada Familia, Hospital de Sant Pau and Parc Guell.

Since I had been in Barcelona eight years prior, a lot of progress had been made on the façade of the Sagrada Familia. I had been inside previously and the wait to just buy a ticket was more than 3 hours, so we walked around the outside and kept on our way. 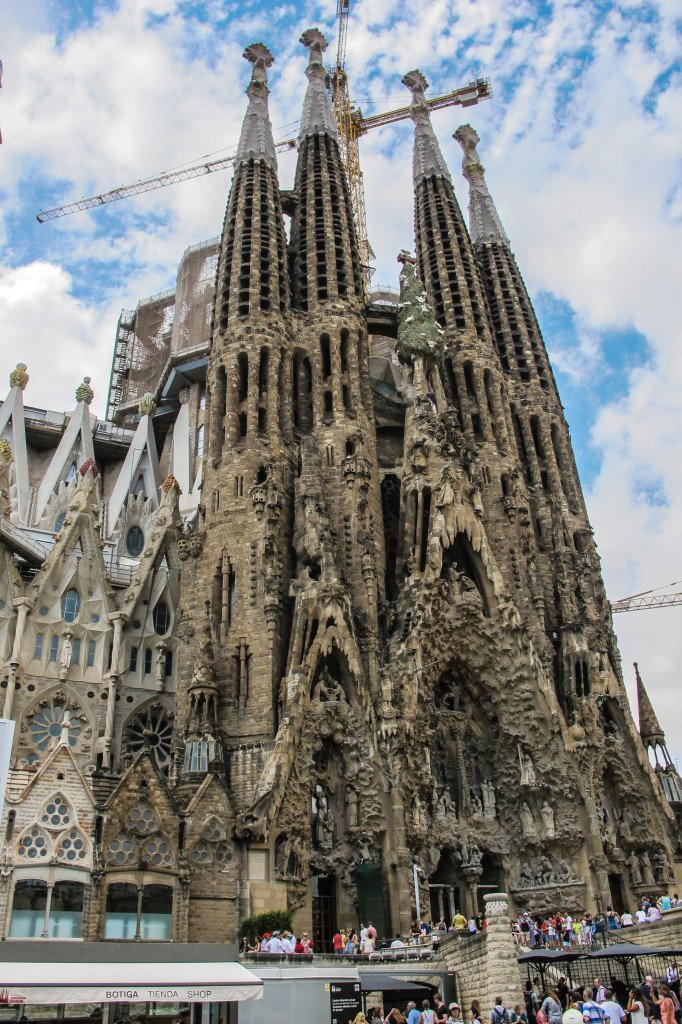 Our next stop was a beautiful hospital that was intentionally built to be a design sensation. Hospital de Sant Pau was designed by the same architect who designed Palau Musica, where we saw the flamenco show two evenings prior. Both of us agreed that this was our favorite stop of the day. 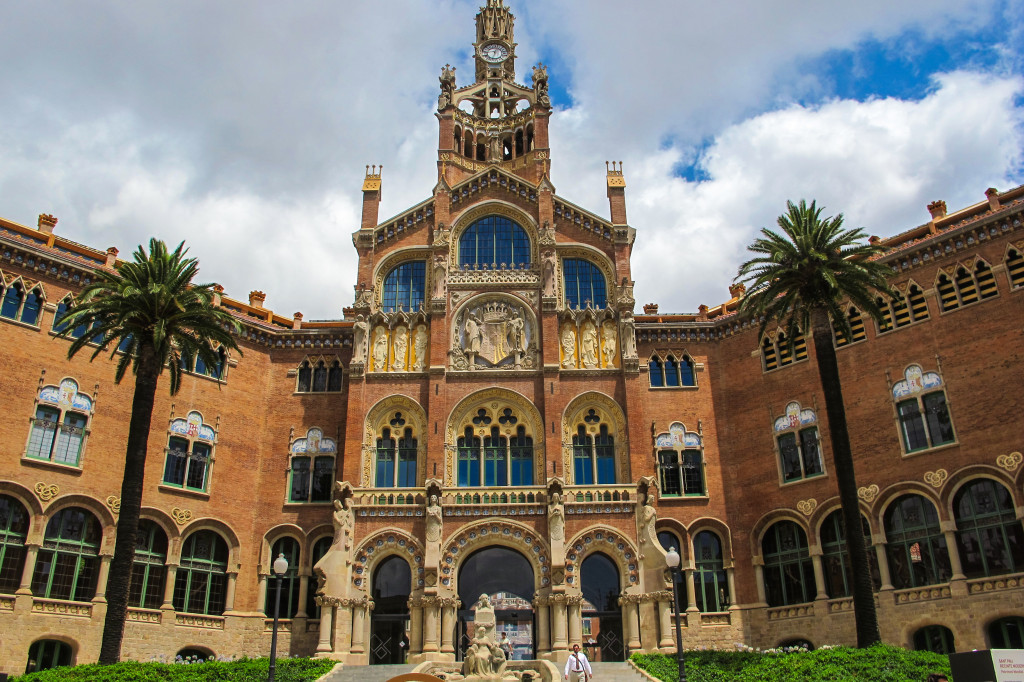 Parc Guell turned out to be a ridiculous tourist trap – much more so than it was in my past visit. The park is very unique – Gaudi, the artist, used mosaic tiles to design benches, fountains, and sculptures around the park, as well as two houses.

It is lovely, but somewhere along the line it got over-hyped and now they charge admission and ask you to buy a ticket for a particular time to see the park. All of that was new since I was there not that long ago. Even since they regulate the number of people in the park it was so crowded all we wanted to do was leave. It was neat to see but also very disappointing. 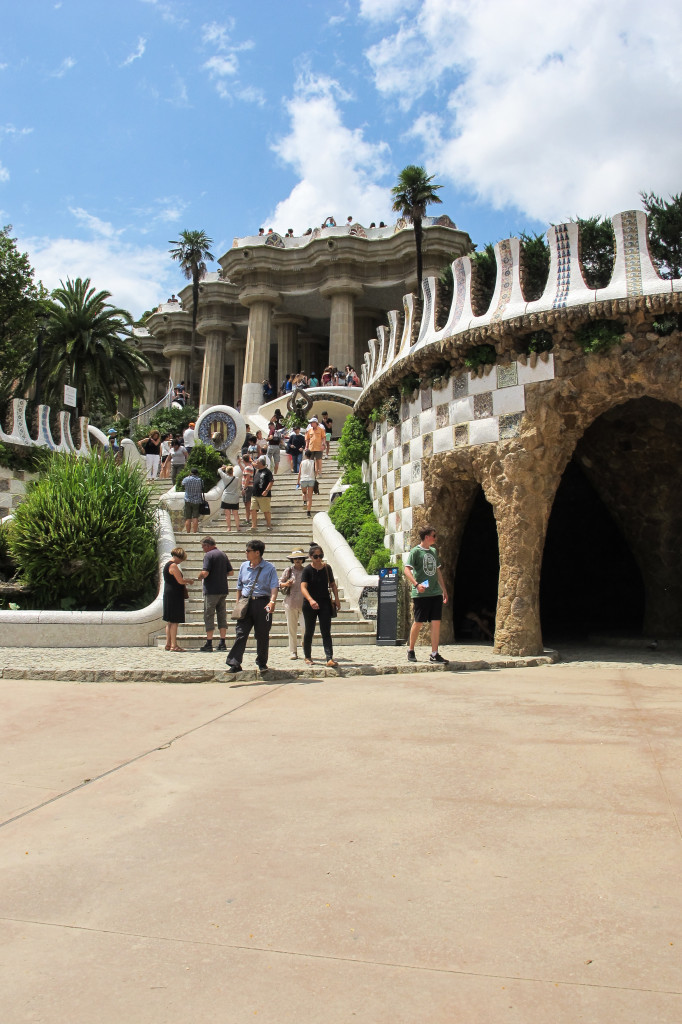 After our day of tourist activities we were very happy to return to our hotel for a siesta by the pool.

Our overall feeling of Barcelona was really that it was a very, very crowded, but very cosmopolitan city. The people of Barcelona are extremely trendy and they love to shop! We felt that the customer service here was lacking, generally speaking, but especially compared to the exceptional service we received in Italy and Switzerland. The Spanish seemed to be more direct and in a hurry than the Italians or the Swiss. We really enjoyed the gothic architecture in Barcelona and being able to explore a city with so much culture and history.