Continuing with the theme of international travels this year, Alex and I just returned from an exciting adventure in Mexico. Our trip was a little disjointed so we’ll share our journey over the course of a few different blog posts. Alex promised to chronicle his solo portion himself, so stay tuned for his inaugural blog post… hopefully soon!

Anyway, the trip started on Thursday the 12th when I headed south to meet my mom for a week in Puerto Vallarta. Alex stayed home for the weekend and met a few of his friends in Guadalajara that Sunday, then when my mom went back to Minnesota on Wednesday, Alex came and joined me for a day before we headed across Bandaras Bay to Yelapa for Nigel and Jolene’s wedding.

My mom and I had not taken a trip together, just the two of us, since I was 7 or 8 and I joined her on a work trip to Miami. It was a great excuse to get together and share some beach time – who knows when we’ll have an opportunity to take a trip together again. We had a lot of really nice conversations and enjoyed spending time together, and only had one disagreement. It was a special time just the two of us and I am very grateful we were able to make this memorable trip happen. 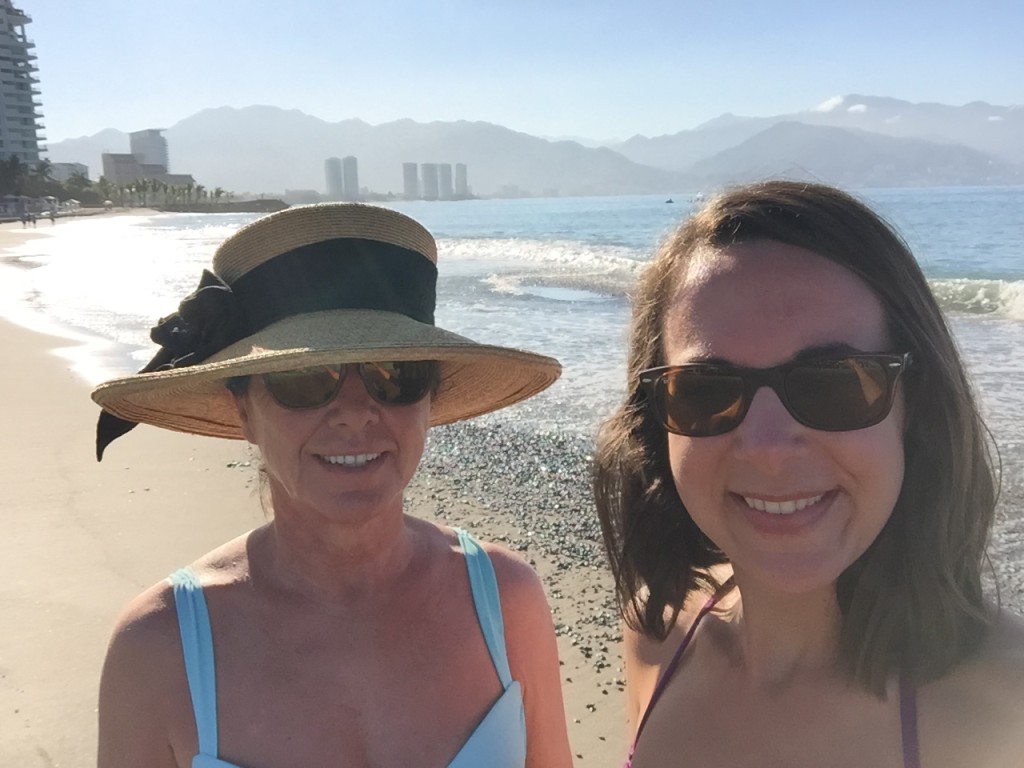 We decided to stay near the marina in Puerto Vallarta at the CasaMagna Marriott hotel. After our experience, I would very happily return to that hotel and absolutely recommend it. We loved the location – the beach was really nice, albeit a bit rocky, and it was a bit off the beaten path from the downtown area, so it was quieter. The amenities were great and the service was exceptional. You really can’t beat the infinity pool overlooking the ocean!

Our routine was pretty low-key. Most mornings we got up, my mom had her tea on the balcony overlooking Bandaras Bay, then we made our way downstairs to have breakfast either at the hotel or the marina, which was a 5 minute walk away, and then we’d set ourselves up on a beach chair for a day filled with lounging, watching the waves crash, getting entertained {and a little annoyed!} by the beach vendors, and also reading. Eventually we would take a long and leisurely walk on the ocean. Pretty rough, huh??

We were surprised how much walking we did while we were there. One day we took our cell phones on our beach walk and measured 2.4 miles. Most days we walked either to the marina or around downtown/Old Town, as well. It’s always nice to get some exercise in while on vacation! 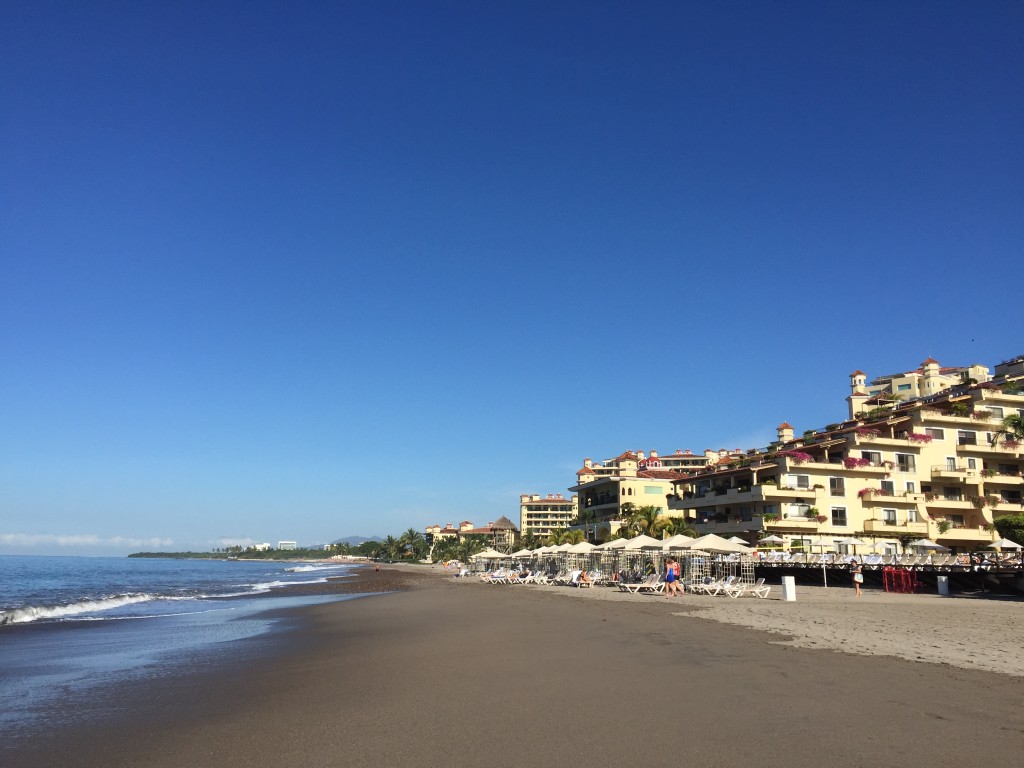 Most of the time we stayed close to the hotel and ventured to the marina for dinner. There were several restaurants to choose from that were within walking distance. A few of the days; however, we took a 15 minute cab ride into the Old Town area, also called the Romantic District, just to get out a bit and explore. This area was bustling with tourists, Senor Frogs locations and a lot of restaurants.

The Old Town area was really fun to explore. It’s a fairly old neighborhood with white-washed walls, wrought iron balconies, clay tile roofs and lots of palm trees. The best restaurants we ate at were La Palapa, where my mom and I had lunch one day, and Vista Grill, which I ate at with Alex on the last night in Puerto Vallarta. Alex and I also had tacos for lunch at cunado, a taco stand on the street in Old Town. It was nice to at least have a little “real” Mexican food while in Mexico!

For the first three days of my trip the weather was mediocre – very comfortable temperatures, but quite cloudy, though each day the weather improved more from the day before. On the fourth day the sun started coming out for most of the days and the temperature was in the low 80s.

On the first truly nice day of my trip my mom and I decided to go on a whale watching excursion. This was in celebration of her birthday, which was back in January. We booked a half day trip with a local company, Mike’s Fishing, to take us out on a beautiful catamaran to search for whales. 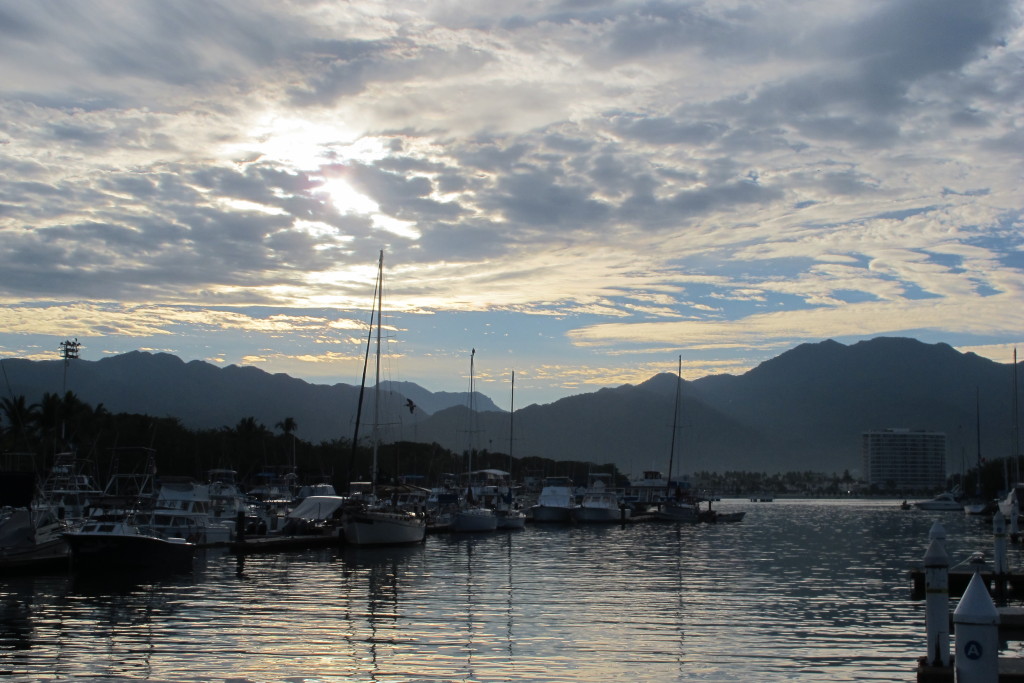 Our whale watching trip was a huge success! We saw so many whales there were times when both of us didn’t know which direction to look because there were whales all across our line of vision. There were several different pods, mostly with at least a male, female and calf, and some with two males.

We saw a lot of whales flapping their tails after allowing us to see their backs, but we didn’t ever get to see a whale breech. There were several times when we were just feet away from the whales. In addition to the whales, we also saw several dolphins, tons of silly birds, some eels, jellyfish and lots of big fish jumping in the water. It was a very memorable experience to say the least! 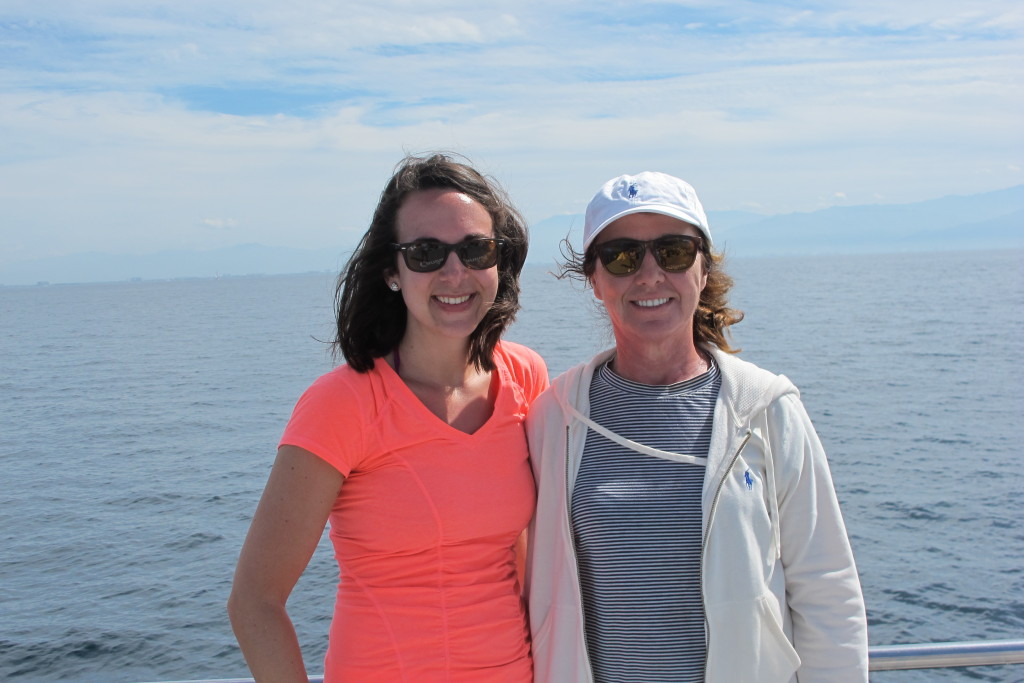 After my mom had stayed in Puerto Vallarta for a full week it was time for her to head home and for Alex to come over from Guadalajara to meet me. We just spent the afternoon and then one night in Puerto Vallarta before we made our way to the wedding we were attending. Since Alex was in Guadalajara, several hours from the beach, he was very excited to order a poolside drink and relax in the sun. 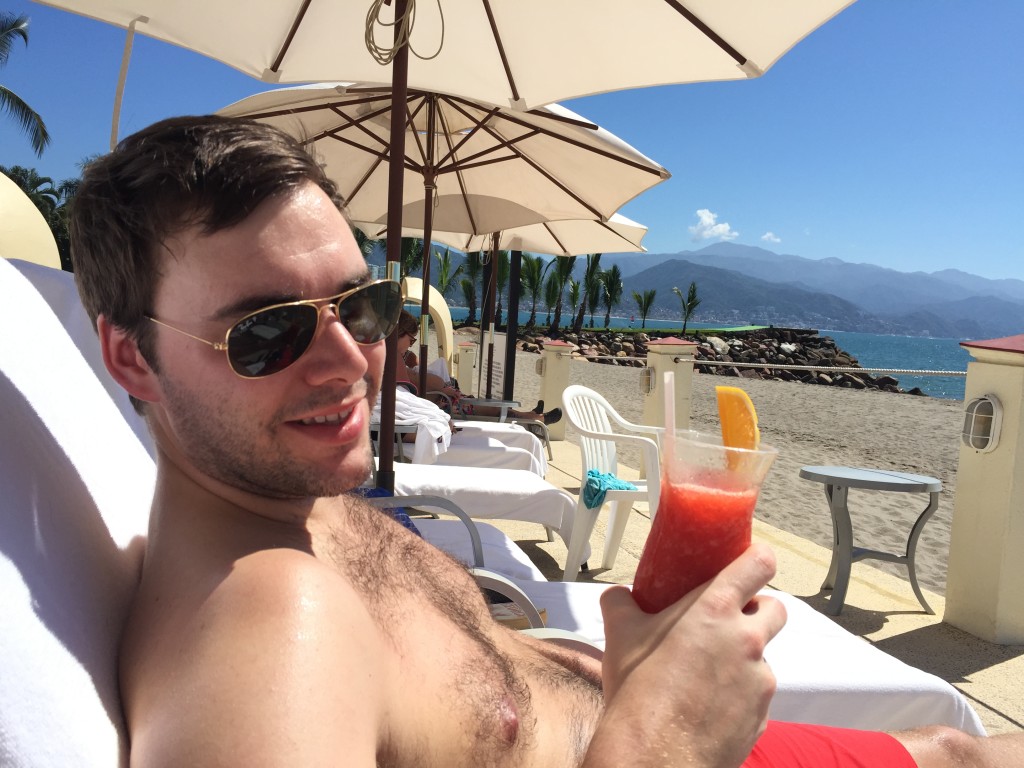 Since we were in separate countries for Valentine’s Day Alex and I decided to celebrate a few days later with a really nice dinner at Vista Grill, a restaurant that overlooks all of Puerto Vallarta. We had a great meal and a lovely view of the whole town. It was a great way to round out the experience in Puerto Vallarta. 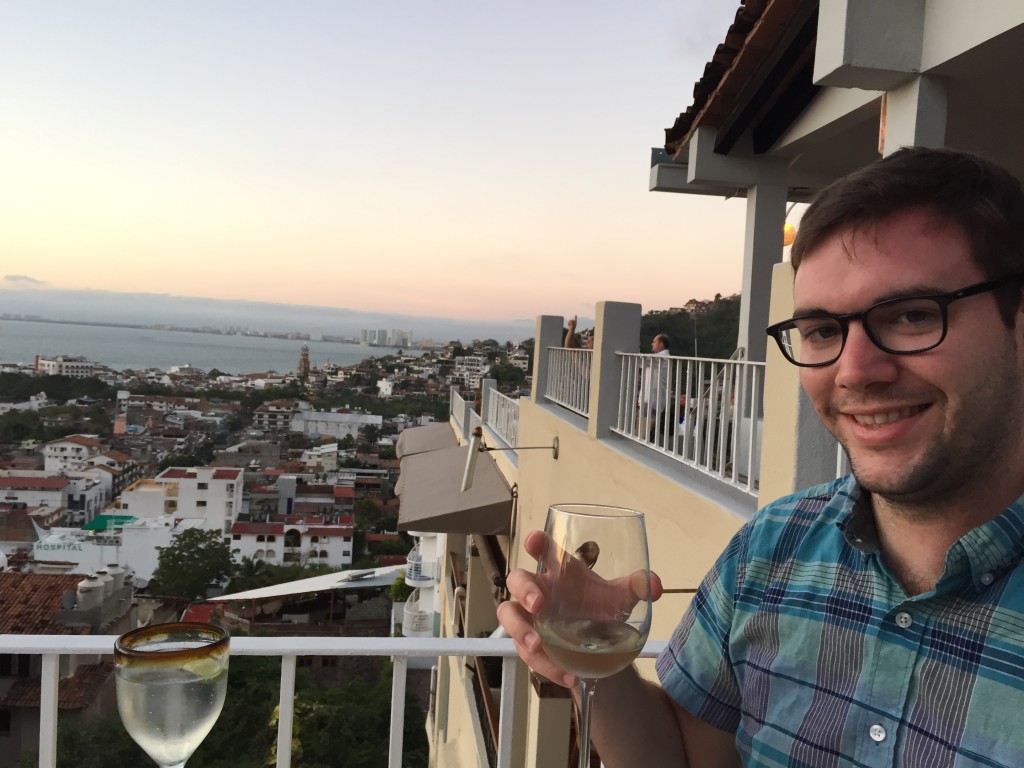 Overall, I had a really great experience in Puerto Vallarta. I would definitely return. If I could get a direct flight there it would be even better, but really, it was pretty easy to get there. We eventually stumbled upon some good places to eat, and I hope to one day return to do some more exploring in Old Town and Downtown. The prices in Puerto Vallarta were totally unbeatable. Cab fares, food and hotel prices are extremely low, particularly compared to Hawaii. That’s reason enough to go back!  I can’t say enough great things about the CasaMagna Marriott, though – we had such a lovely experience there.

The only thing that really turned me off about Puerto Vallarta is how overrun it is with Americans. I knew to expect this going into the trip, but for me it’s a little sad that the city caters so much to the American tourists and makes it so easy for them. I know that sounds a little brash, but everyone there speaks English, menus are almost exclusively in English, and it’s just so Americanized. It’s great that Americans have a place to go in Mexico that is so safe and comfortable for them, but I had hoped for a little more of an authentic experience. I was glad that Alex and I did have an opportunity to see “real” Mexico at the end of our trip, because I think I would have felt a little slighted if we had only seen Puerto Vallarta. With that… stay tuned for the next phase of our trip…!