Well, it’s official, we have a “kids’ room” – not just Ben’s room anymore.

If you’ve been to our house before you know it’s on the small side of the size spectrum. Our main floor is around 1,000 square feet and is where all the action happens and where life is lived. Our little 1909 house has a circular floor plan with compartmentalized rooms and no insulation. That being said, it’s loud, creaky and closed off. What it lacks in modern day function for a family with two young kids, it makes up for in charm and character, thankfully.

Hannah spent her first six months in a pack & play {a portable crib} in our bedroom. You could draw a 10 foot line from the kitchen stove straight to Hannah’s pack & play. Not the most ideal place for baby Hannah to sleep in the evenings when Alex and I are trying to clean up the house, get coffee ready for the next morning or make Ben’s lunch for the next day.

We decided to take the band-aid approach to merging our two kiddos into the same room. We pressed “order” on the crib for Hannah and then shortly after it came we made the time to assemble it and re-arrange the spaces. That happened about 10 days ago.

It took Hannah a few nights to adjust to her new crib and surroundings. Her new room is much different – Ben sleeps with white noise to help drown out the sounds coming from throughout the house, as well as a night light and a heater that makes noise. It’s loud in a different way.

I’m happy to report that it seems like Hannah has fully transitioned to her new space. She’s been napping so much better in her crib than she did in the pack & play {honestly, I almost never had her nap in the pack & play because the naps were so short! Probably because it was so awful and uncomfortable… sorry Hannah!}.

It was an adjustment for Ben, too, and I think he really loves having Hannah in there with him. He is such a caring big brother. Ben woke up too during first few nights when Hannah would wake up upset. When I’d come in to comfort Hannah Ben would ask if I was going to rock her or feed her. If I’d say I was going to take her out and feed her he’d ask if I was bringing her back, then he’d wait up, quietly in his bed, for her to return safely before falling back to sleep. 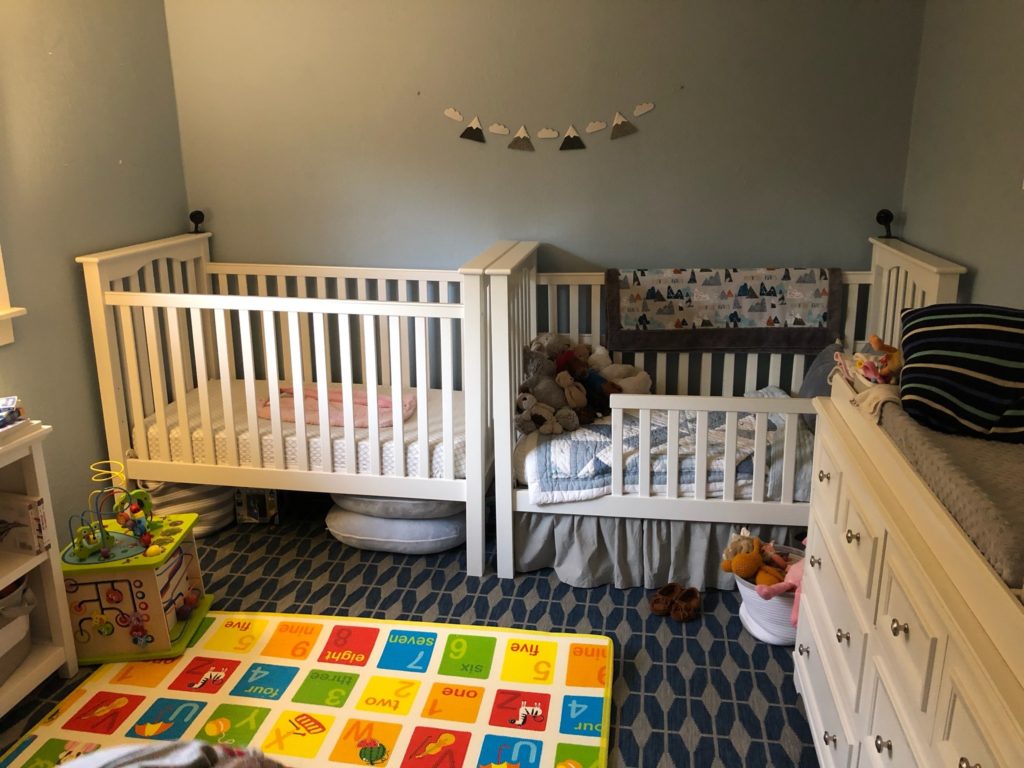 My office just got cleaned out downstairs {more on that to come!} and I made a super quick turnaround to turn that into an alternate play space for Ben to use if Hannah is napping upstairs. So far his quiet time {usually on the couch} and afternoon play time has coincided nicely with Hannah’s naps and hasn’t been a big deal… yet! 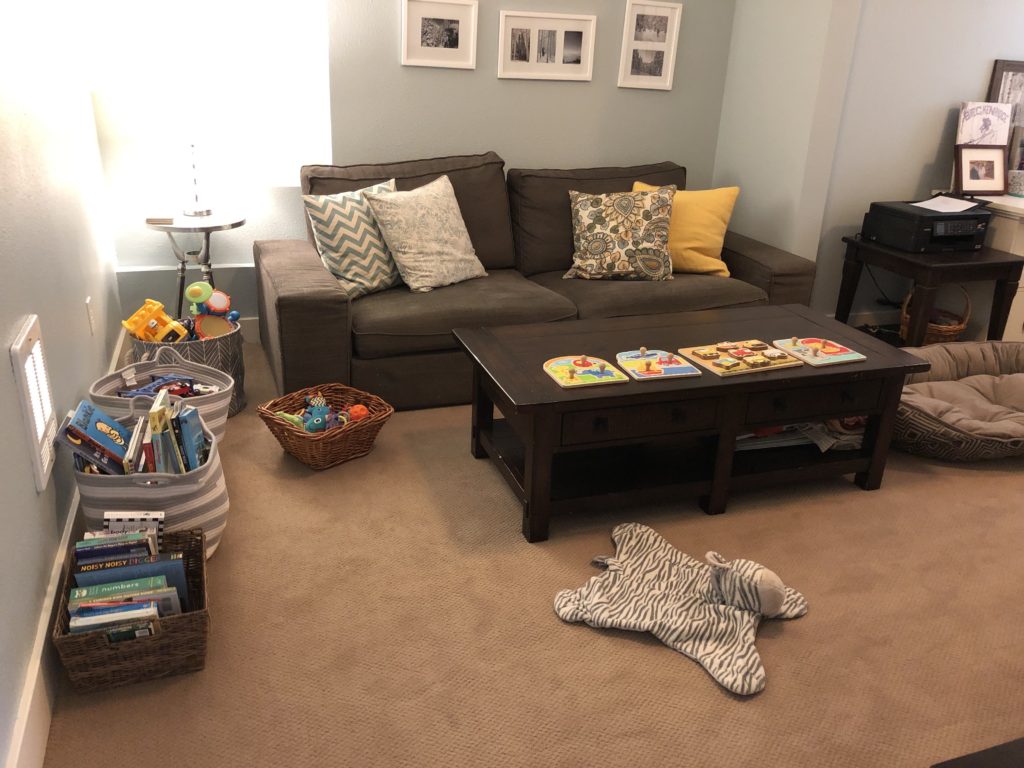 I think that having Hannah move into Ben’s room has been one of the first big steps into the sweet sibling dynamic. Ben has been really interested in Hannah this last week. He makes sure to hug and kiss her goodnight and he’s been trying to play with her or help her lately. The sibling love is pretty much the sweetest thing ever. 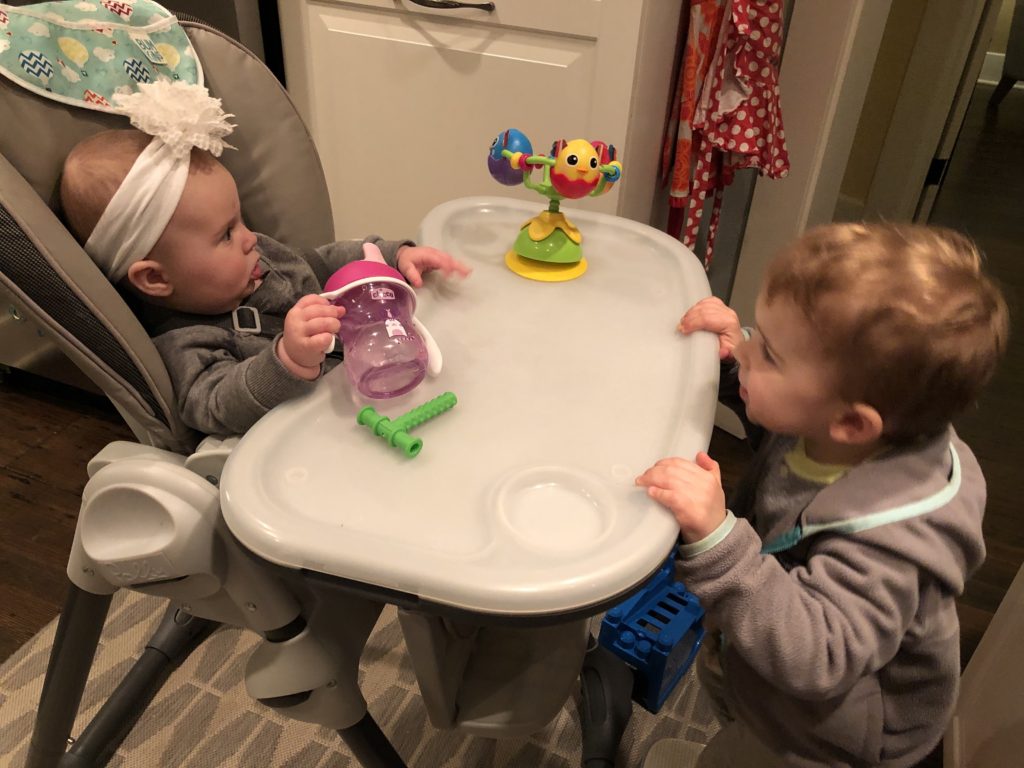 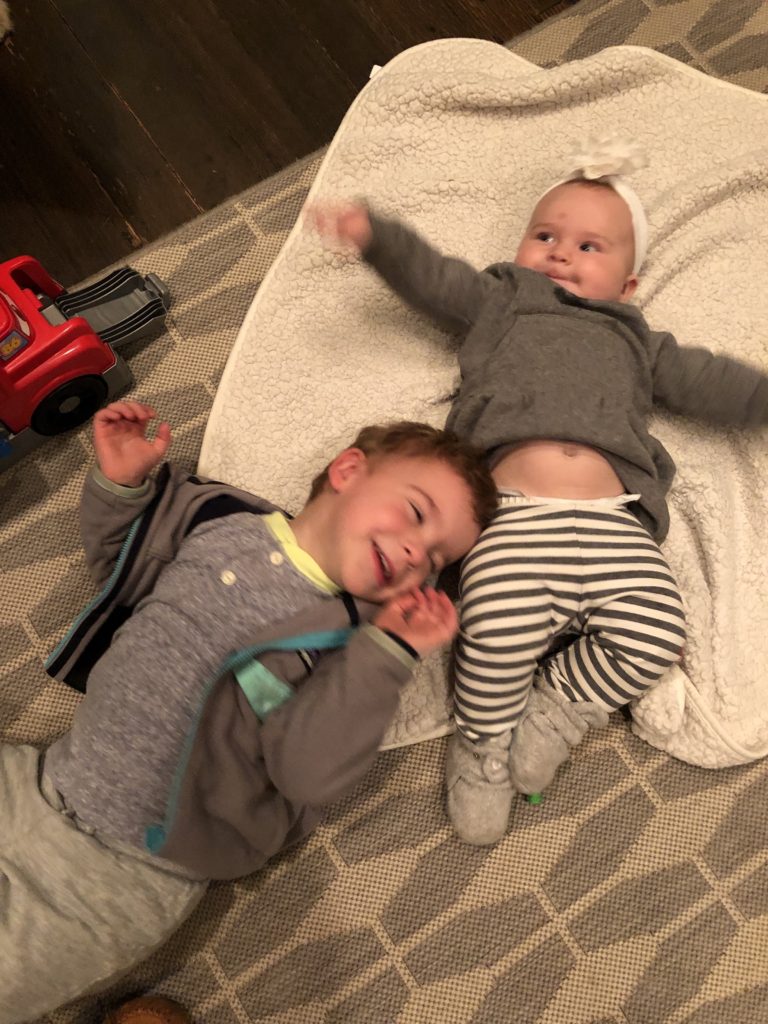