After 22 hours of travel we finally reached Cinque Terre, Italy, the first destination in our 26 day trip to Europe. 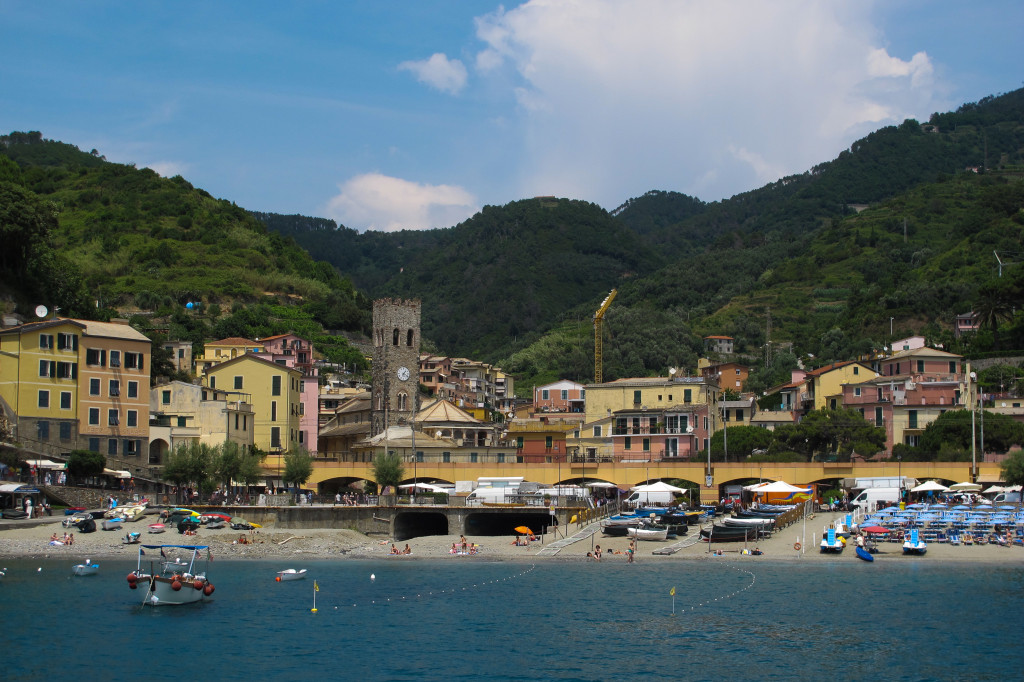 We arrived by train from the Milan airport to the village of Monterosso. When we made it through the train station we were greeted by the sparkling blue Mediterranean Sea just in front of us. The sun was shining, there was warm breeze coming off the sea and we both felt a sense of relief to have made it there. 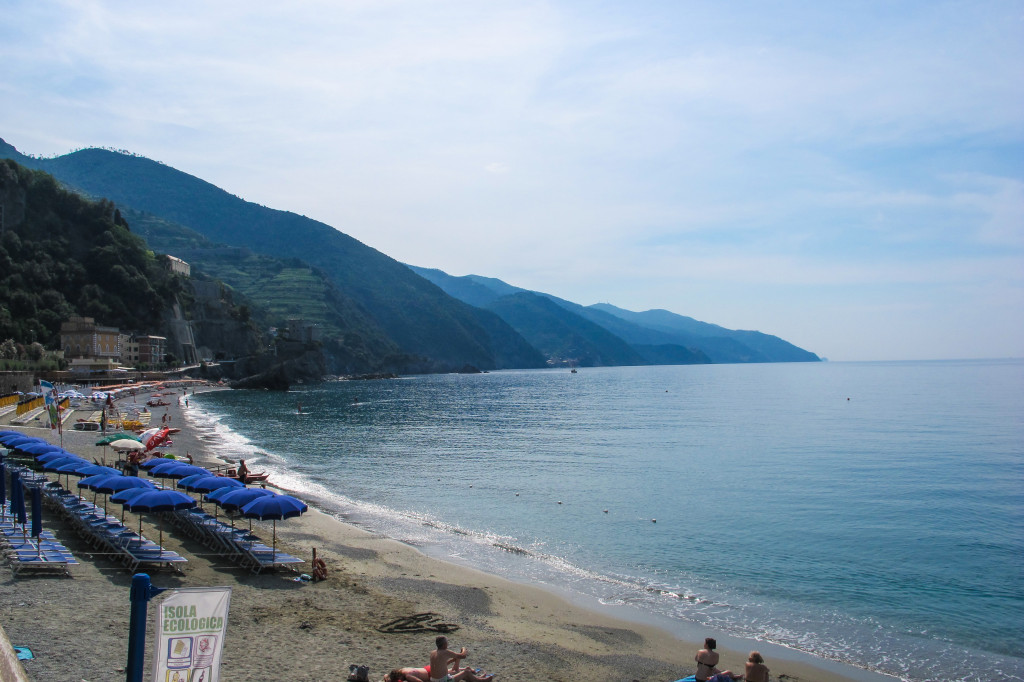 Both of us had passed the point of exhaustion but wanted to make the most of our first evening in Cirque Terre. After getting settled in our AirBnB apartment rental, we walked down to the town center and found a local pizzeria to dine at.

We waited in line for about an hour, fighting the locals for a table, then we were finally seated. Our first meal began with a ¼ liter of vino de la casa, prosciutto de melone and fried pizza dough {not sure how to say that in Italian}. We each ordered our own pizza, which ended up being way too much food. Neither of us cared much, though, because it was fantastic and it provided a free lunch for the next day. 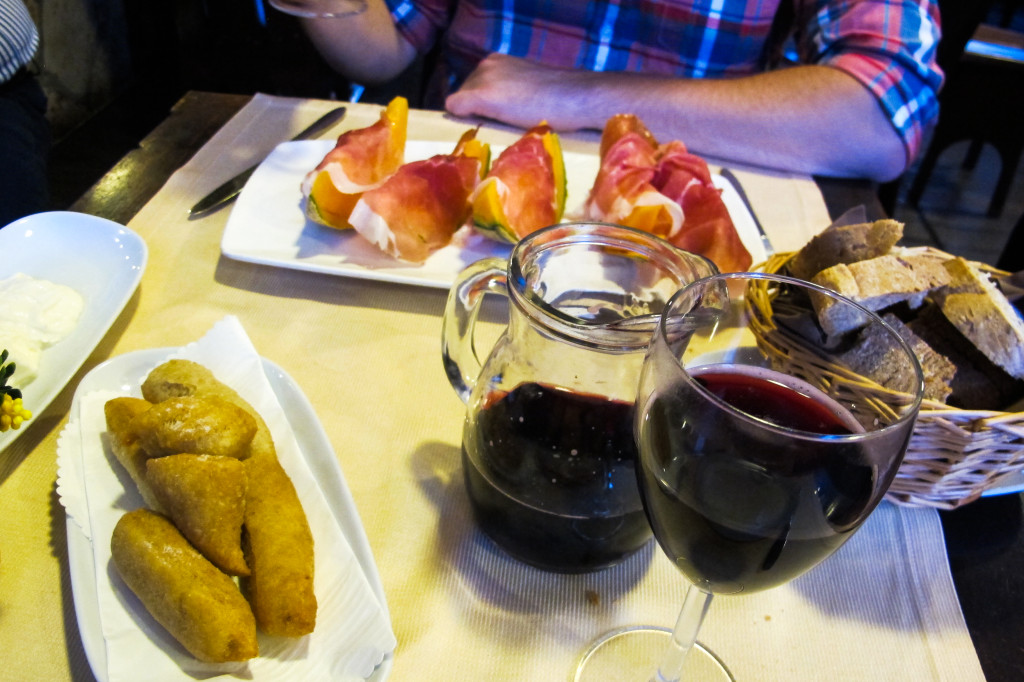 After our meal we decided to take a walk and get some fresh air and treat ourselves to some gelato. We shared a bowl of stracciatella as we walked through the village of Monterosso toward the city center. 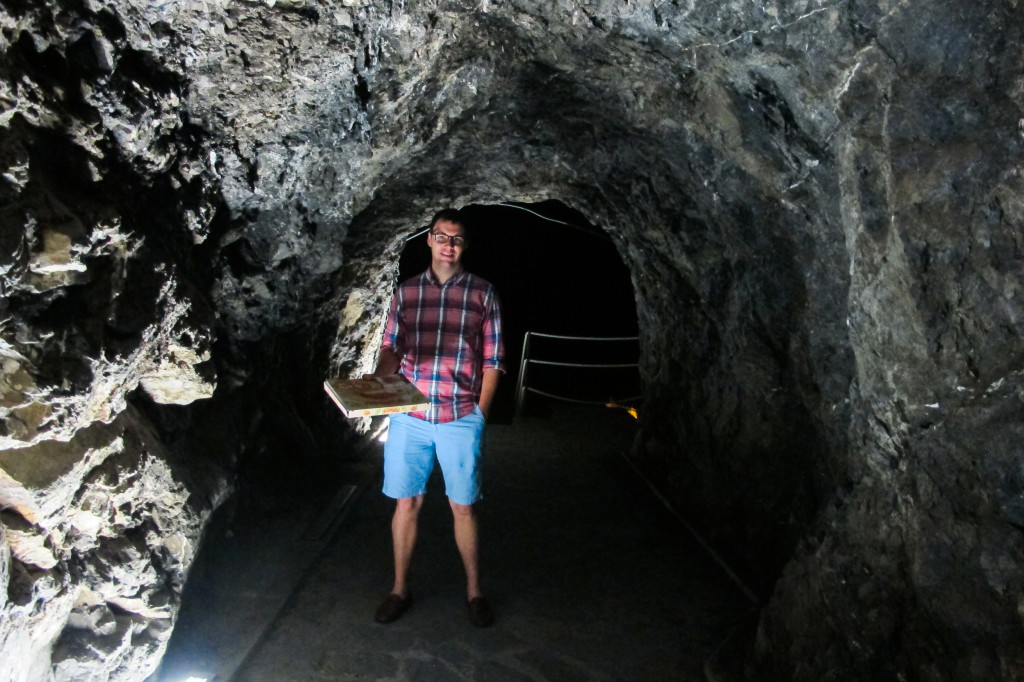 After our jaunt through town we headed back to the apartment. One big hill and 221 stairs later we were moments from laying down in a bed and falling asleep. The instant our heads hit the pillow we were both down for the count.

Having only one full day to spend in Cinque Terre, we wanted to squeeze in as much as possible. The sun was shining brightly from the light-filled apartment and we knew it was going to be a great day. Our first stop that morning was for cappuccino. 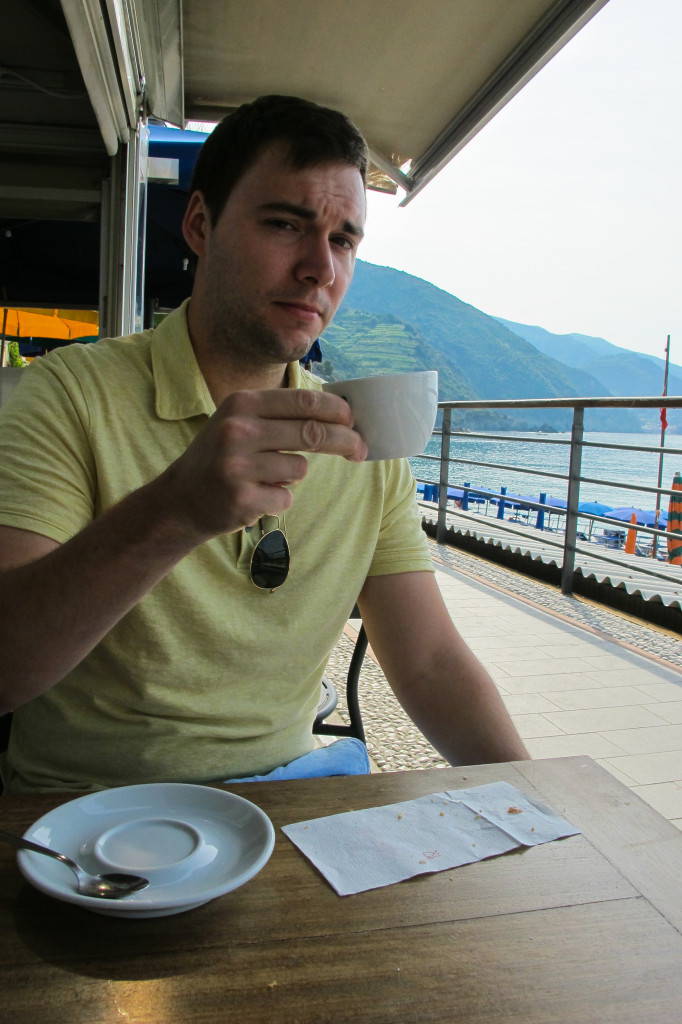 I accidentally ordered a doughnut instead of a croissant, the first of many mis-orders in a foreign country, but once I tasted it I didn’t regret that mistake. We ate our pastries and sipped our coffee al fresco, just feet away from the sea. It was the perfect way to start our first full day in Europe. 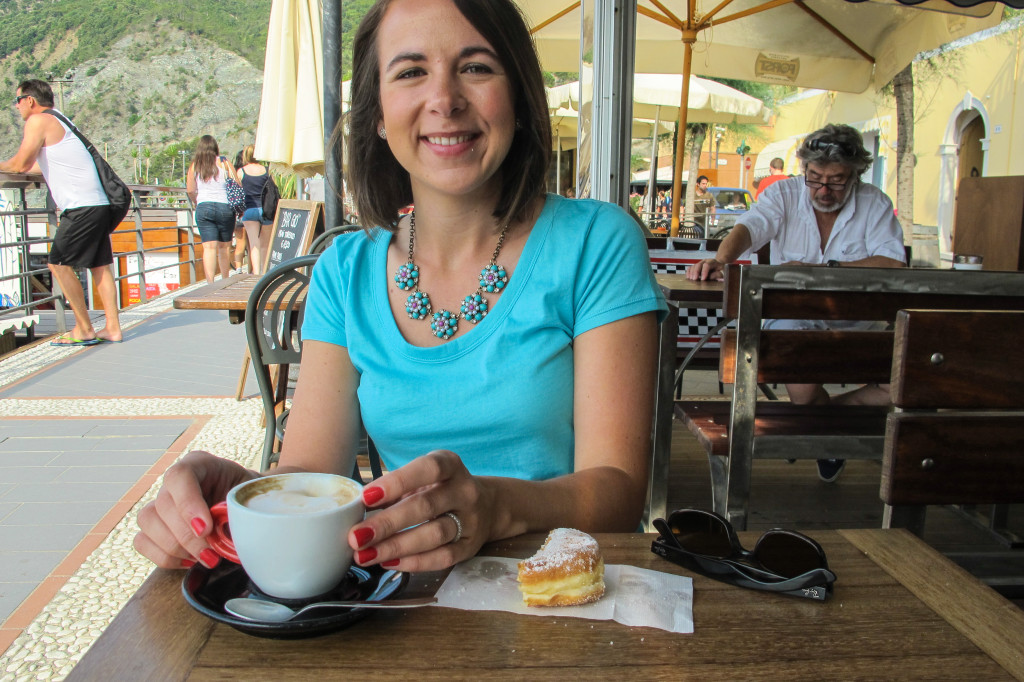 With full bellies we set out to do the hike from Monterosso to Vernazza. In my mind it was going to be a nice walk along the beach. Not so in reality. The hike truly was a hike. We climbed stairs and hills and wound our way across the mountainside, clinging to the cliffs as we moved towards the next village.

Vernazza looked more like what I had expected Monterosso to look like. When we approached it you could see the village dotted with brightly colored buildings, just like in the pictures I had seen. 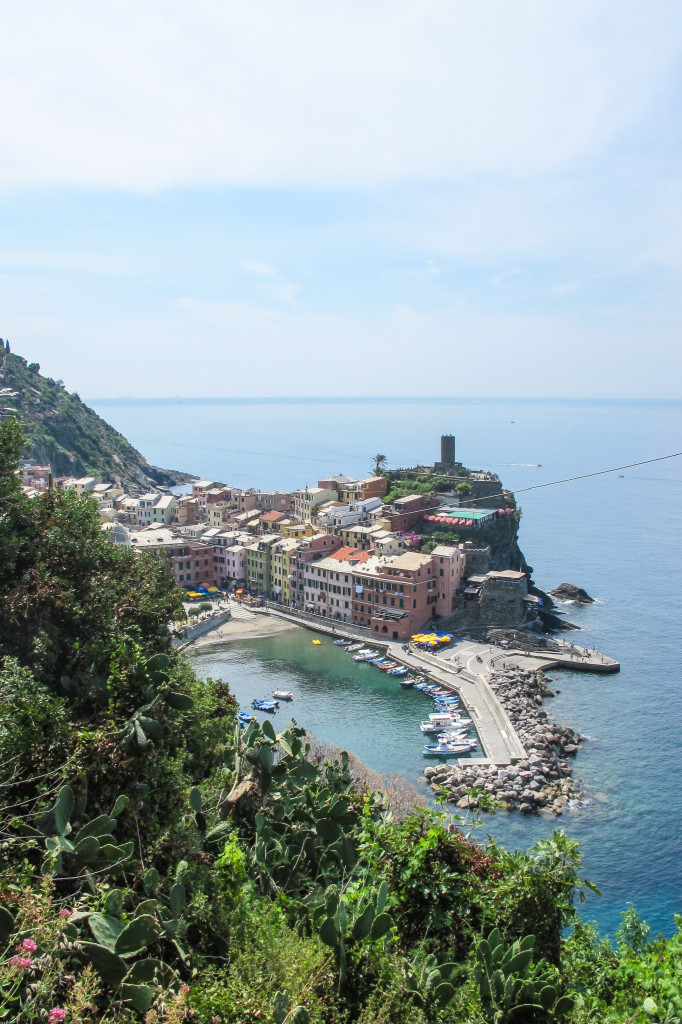 Monterosso never seemed to look like that to me. While there were bright buildings it just didn’t look like what I had expected to. Monterosso is more spread out than Vernazza and the buildings didn’t seem as tall. The beach was what did it for me.

We spent some time strolling through the sidewalks of Vernazza and admiring the ancient architecture, pink and peach colored facades, the laundry hanging from the windows and the cute boats lined up along the seawall before settling in for a drink and some bruschetta.

Eventually we made our way back to Monterosso by way of a boat. The rest of the afternoon was to be spent lounging on the beach.

Our final evening was spent at a restaurant right on the beach where we ordered a liter of sangria {because why not?}, caprese salad, focacce e salami e formaggio {I expected this to be some focaccia with salami and cheese on the side but it ended up being basically a salami and cheese sandwich on focaccia bread}, then trofie pesto (trofie is a pasta that is short and skinny and has the bite of gnocchi, it was covered in delicious pesto, which originated in Cinque Terre). Of course we capped our evening off with some more gelato. 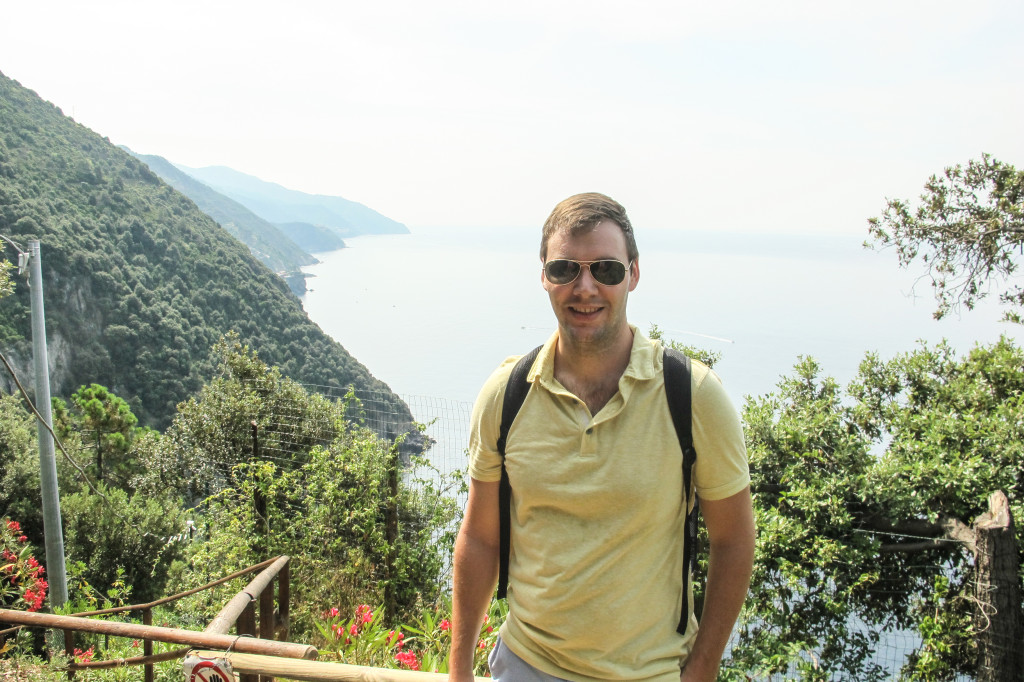 We were very glad to have gotten a relaxing start to our month-long excursion. Both of us enjoyed touring Cirque Terre but ultimately felt like it was over-hyped. It is a beautiful area but whenever we spoke with someone who had been there before it seemed like they made it out to be the most incredible place in the whole world, which in our opinion it is not. I know I am going to get a lot of hate for that, but it just is our perception.

Next stop… Arqua Petrarca for Alina and Alberto’s wedding.