We’ve officially moved into The Lodge! 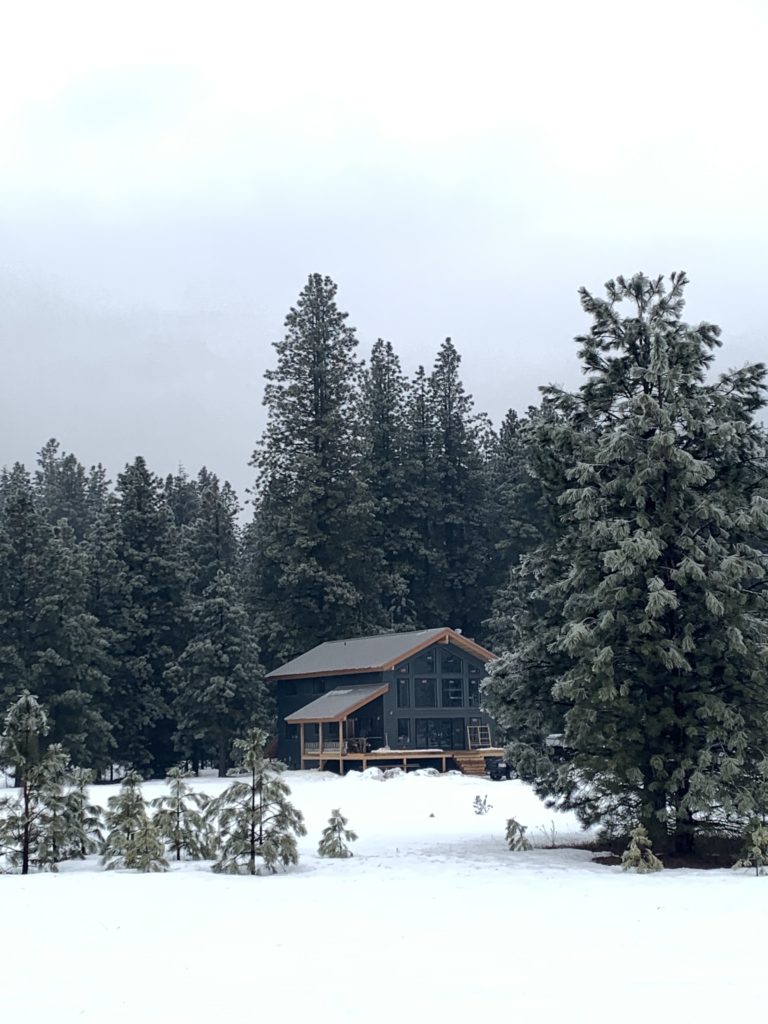 A few weeks ago Alex’s parents joined us in our first stay at The Lodge where we unpacked and got settled. We waited a long, long time and worked tirelessly to make this a reality for our family and it finally happened – we moved in! 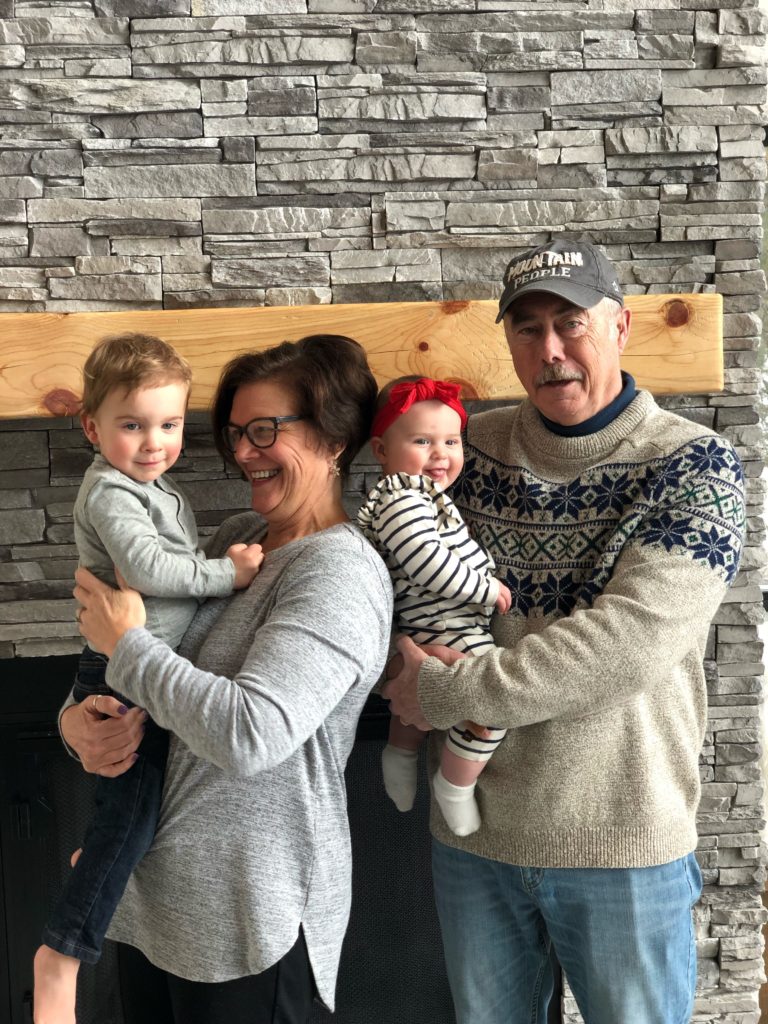 The day we had planned on driving out there ended up being the start of Seattle’s “Snomageddon” – when snow is forecast for Seattle the whole city shuts down. This particular storm was predicting 4-8 inches of snow which ultimately happened and caused nearly a week of snow days and gridlocked the entire city. Grocery stores ran out of food, cars were abandoned on roads – no one went out or did anything. We chose the very beginning of the storm as the time we left our house to head for the mountains. 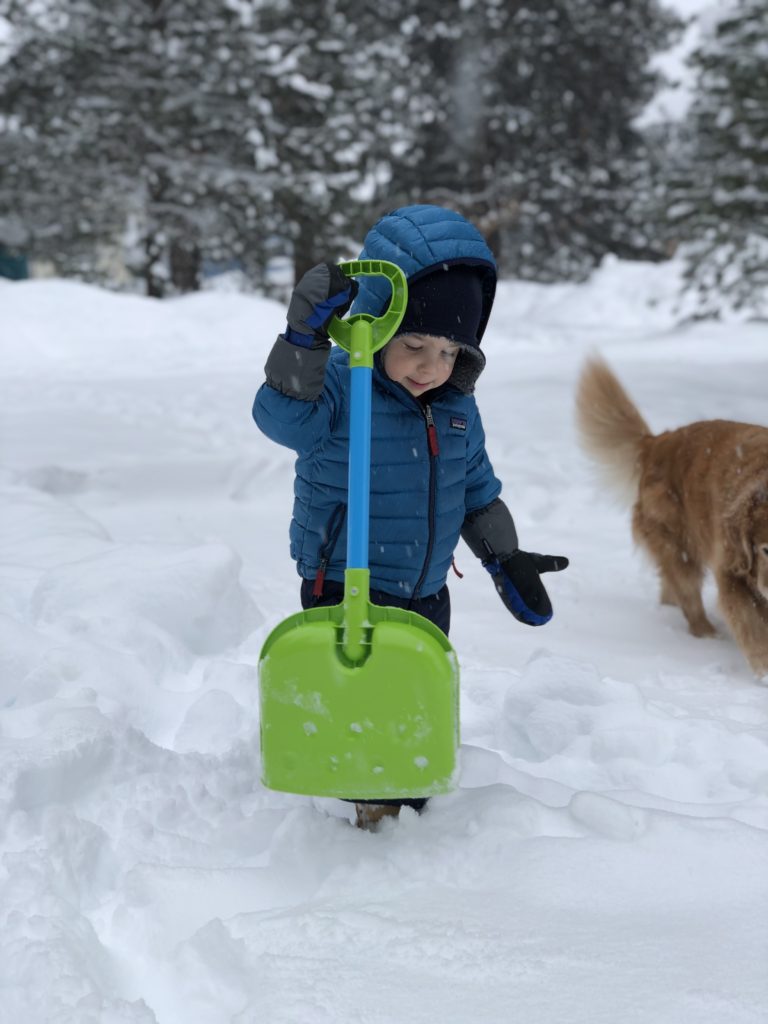 The drive to The Lodge was an absolute nightmare. I drove my car with Ben and Hannah and endured horrible snowy city traffic, then blinding and treacherous snowy mountain roads. A 2-hour drive turned into a more than 4-hour drive. It was awful. I was so relieved to have made it, and once we arrived, most of my stress melted away as we explored our beautiful mountain home. 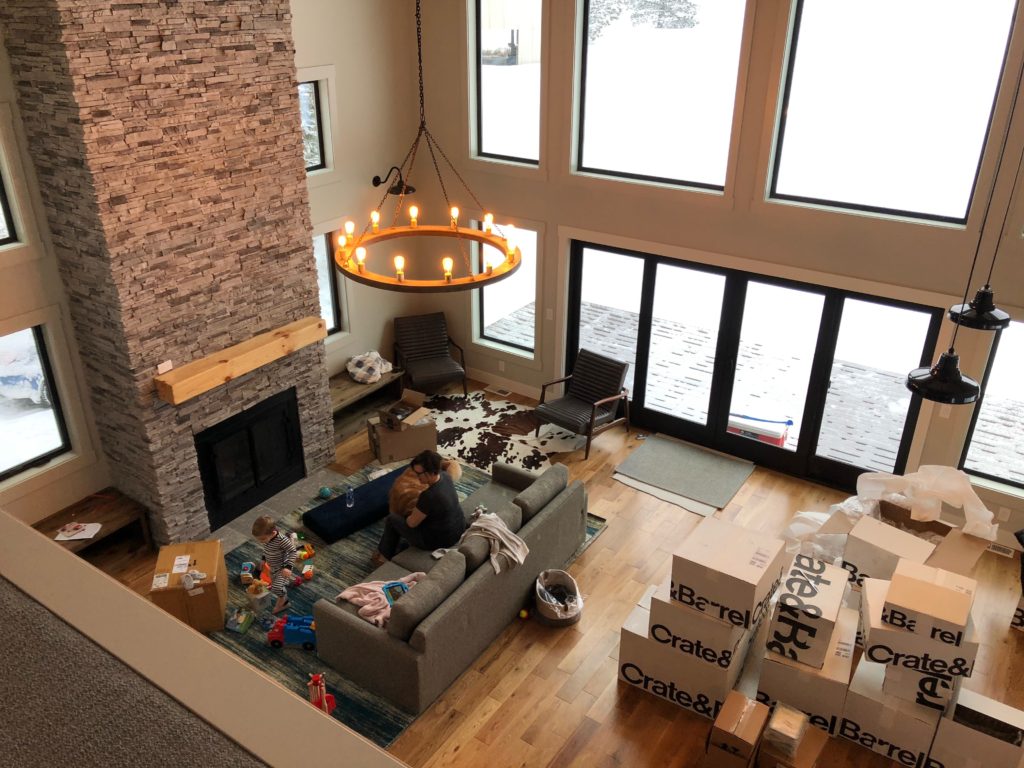 Unsurprising to anyone who knows anything about home building or renovations – our completion date for the house kept getting pushed further and further back at the last minute and the house still isn’t done. Finally we just told our builder that we have a non-negotiable furniture delivery date and Alex’s parents have airline tickets so we’re coming to the house and we’re staying for a week. They were able to finish up quite a lot, but still some final details were not complete yet. 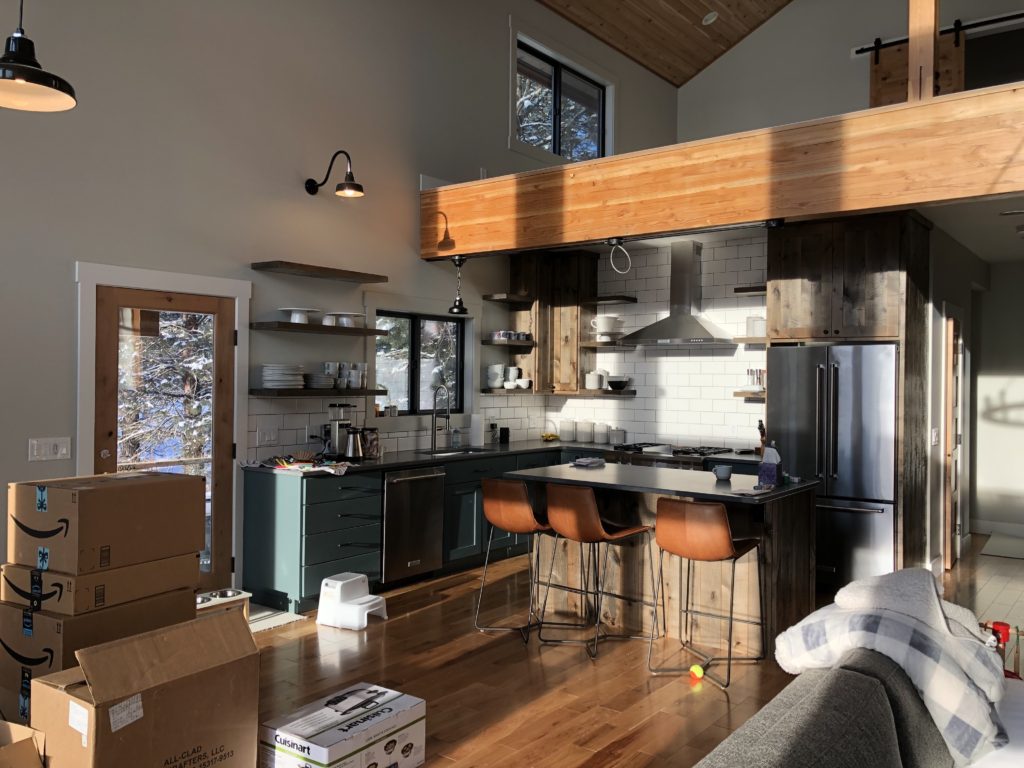 During the course of our stay there was a bit of work that took place on the house and since we’ve been there more finishing details have been taken care of. At this point I believe the house is more than 99% complete – I think there are only a couple more odds and ends to be taken care of, and most of those things are changes we’re making. The biggest things that are undone now are the deck railings outside and the shower doors in the master bathroom.

The moving in process was a little more complicated than a standard move. Moving into a vacation house was different in that we ended up having so, so, so much stuff shipped to our primary residence, renting a trailer and then moving it out there that way. We purchased almost every item specifically for the house, so we had to acquire everything and get it out there. 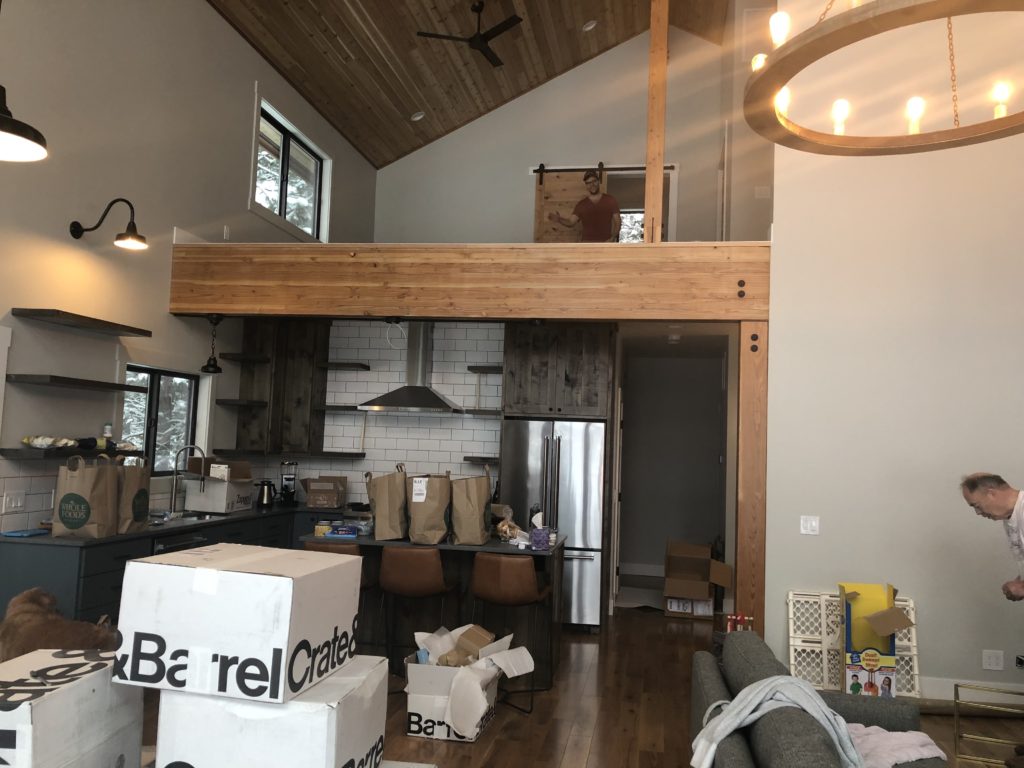 The day before our move-in date we learned from our mail carrier that because we didn’t have a mailbox we were not considered customers of USPS. That was news to me, and because of that, they would not deliver packages there. Apparently the mail carrier is paid per customer and she was not interested in not getting paid to deliver our 28 packages. This, along with shipping delays from the inclement weather, threw a bit of a wrench in our move-in plans since we had anticipated our massive Amazon orders would be at our house upon our arrival. The day after we arrived we had to make two trips into town {25 minutes away} to the post office to pick up our packages that weren’t delivered. And then we had to put up a mailbox. In February when the ground was frozen. 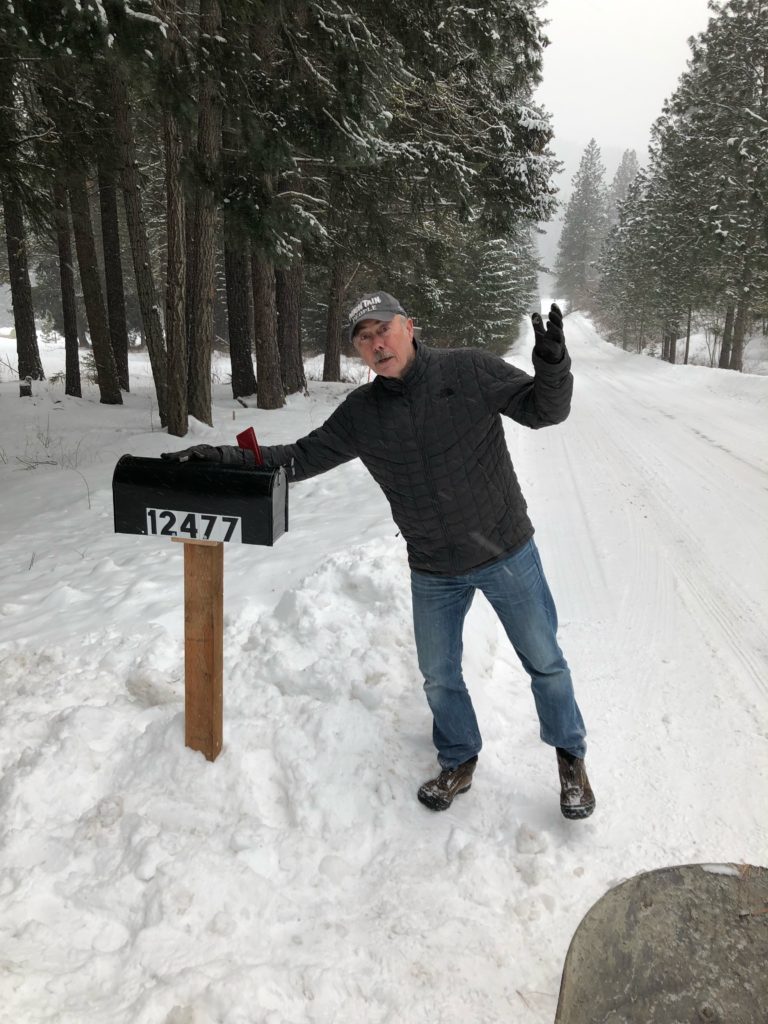 It seemed like the boxes would never end. They just kept coming and coming. We worked through them really quickly and by the end of our first full day we had the kitchen largely pulled together, thanks in large part to both of my children napping AT THE SAME TIME for more than an hour. Side note: it is unbelievable how much I can get done during nap time! 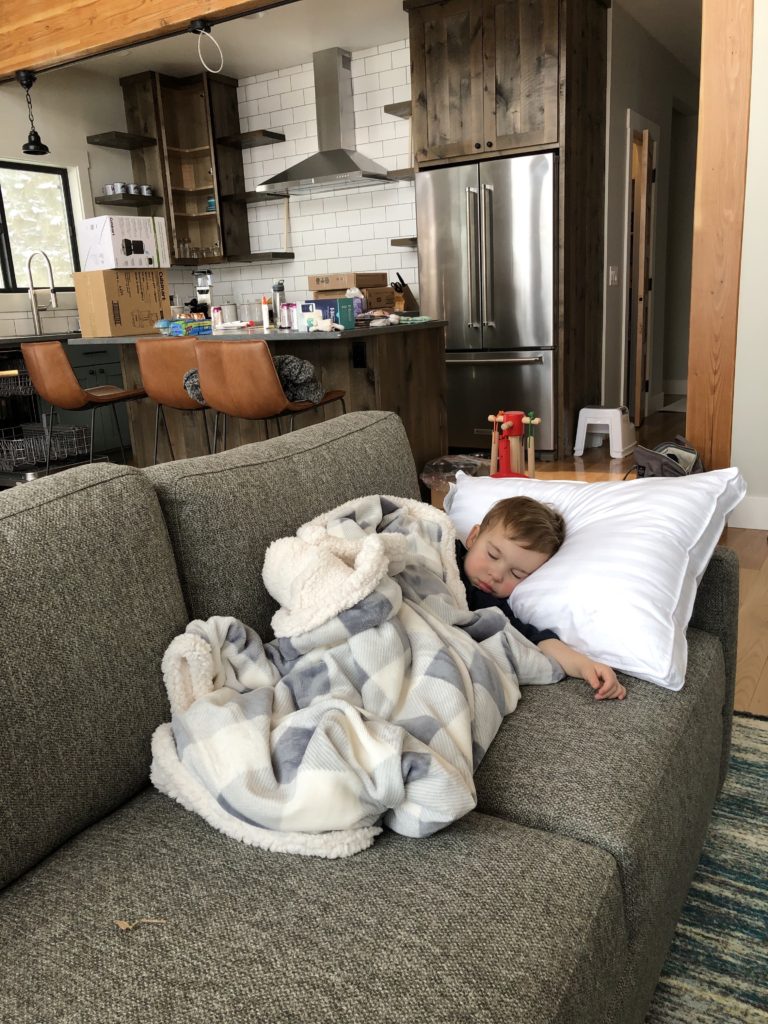 We all ran out of steam pretty quickly and the glamour of moving in faded fast. It’s tiring and cumbersome and never seems to end. Despite all of the housewares that we have and the food in our pantry and the furniture we have, there is still so, so very much to do. I know we’ll get there one day – hopefully within the next 6 months or so we’ll be able to step back and say that we feel like the house is in a complete state. It’s so, so, so very exciting to see it come together, though. 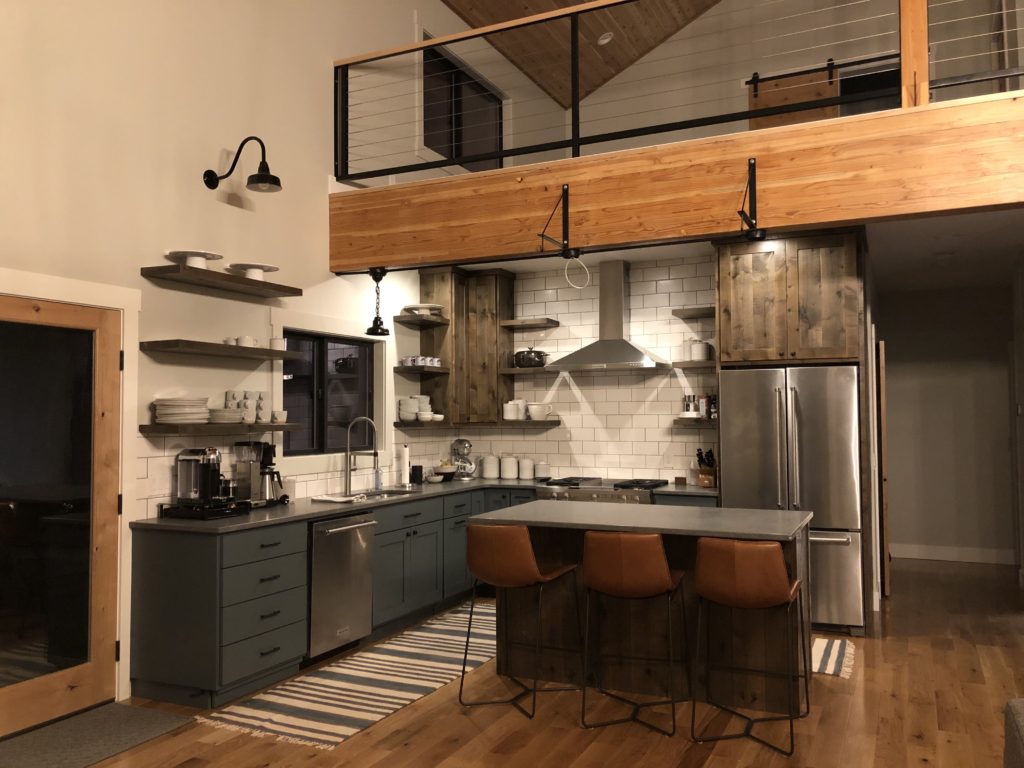 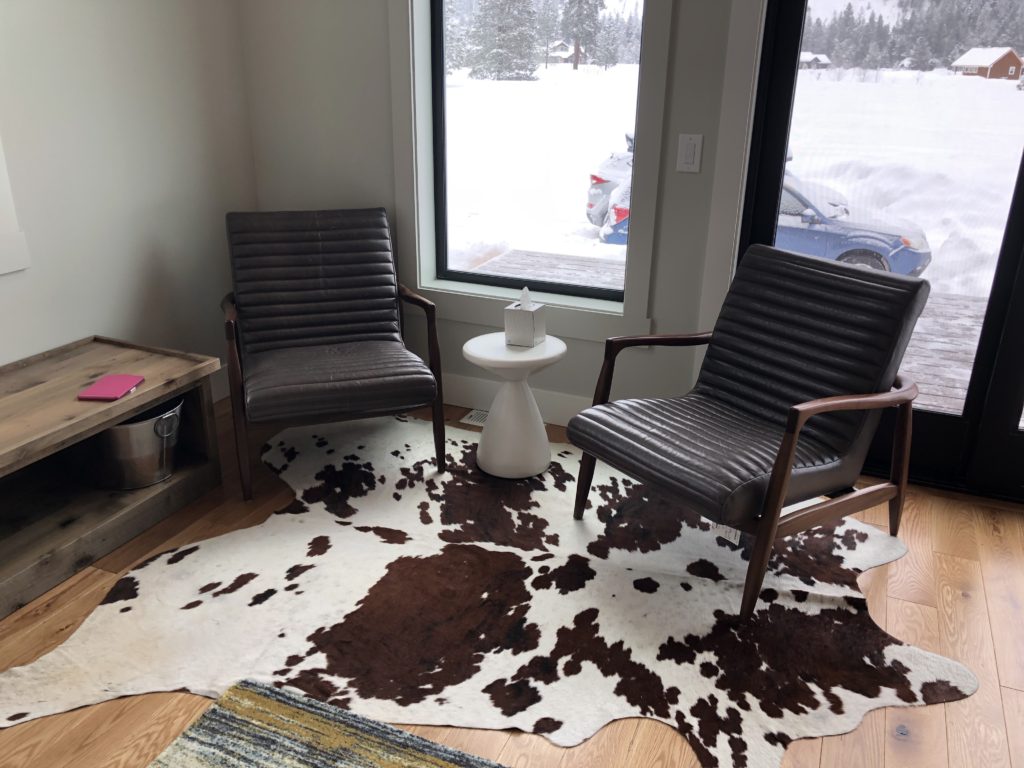 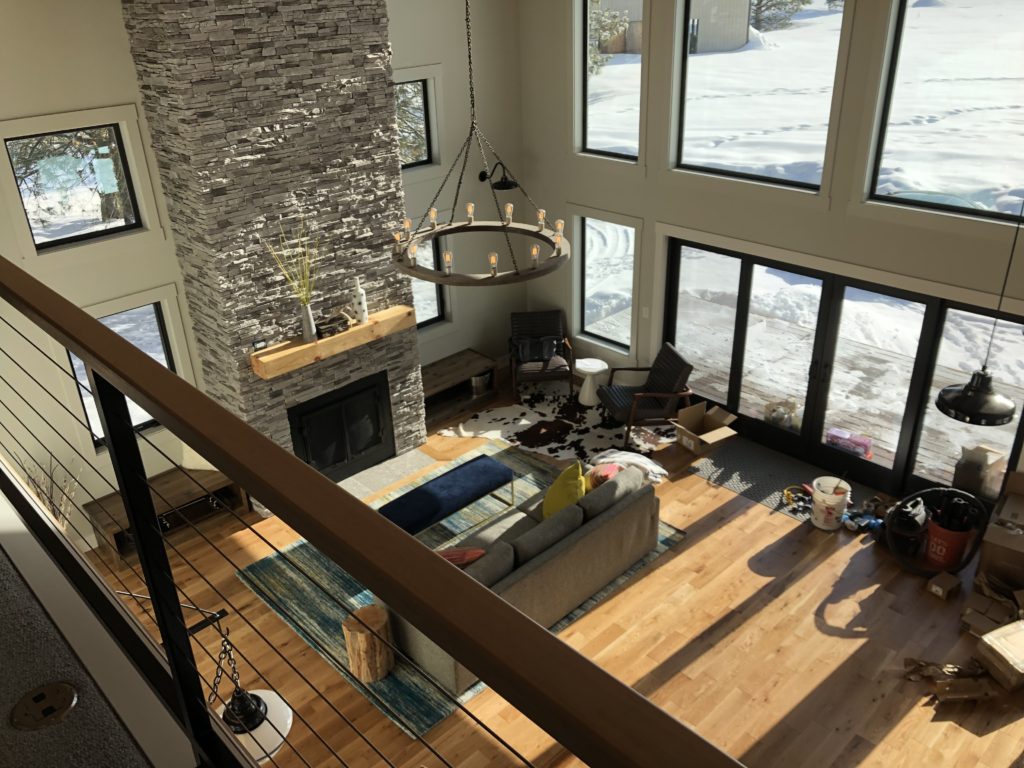 As I’m writing this it still hasn’t hit me that it’s real. I feel like we just had a vacation at a really nice house in the mountains and spent a really long time settling in there. I’m hoping that during our next trip out it will sink in that this is our mountain house… 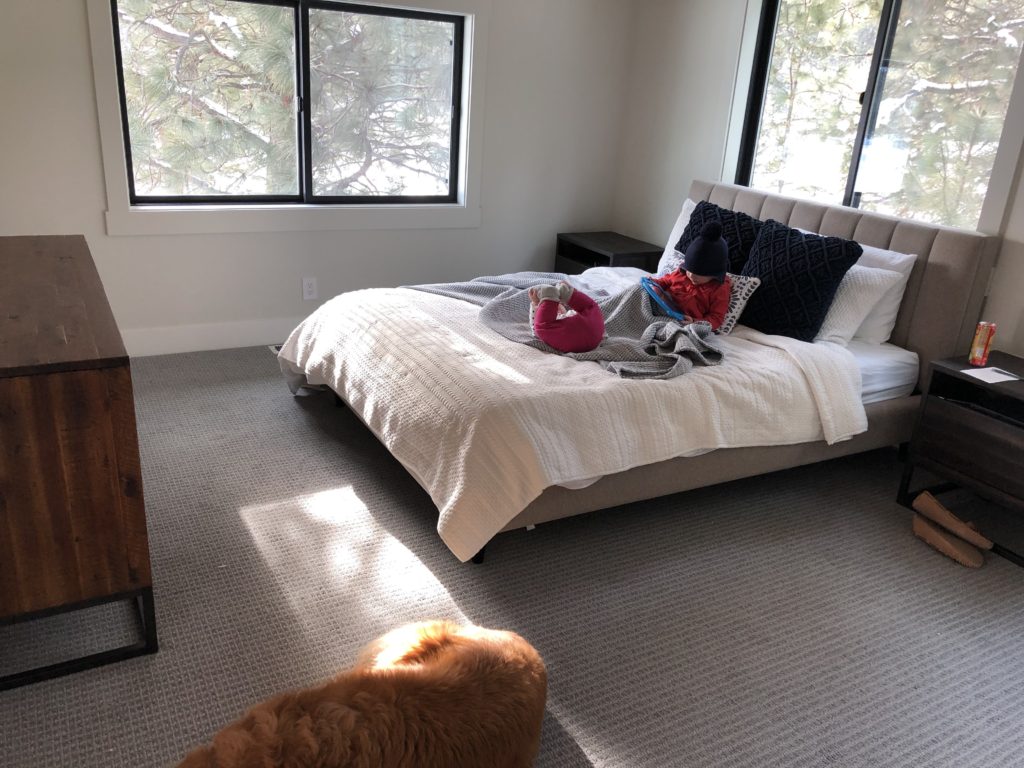