Happy New Year! We are ringing in 2017 with our seven month old!! Several of our friends have told us that from about four months on it just keeps getting more and more fun and we are really seeing that hold true with Ben. The first few months were fun in their own way but now that he’s super interactive and alert, he is a blast! Here is what Ben is up to these days… 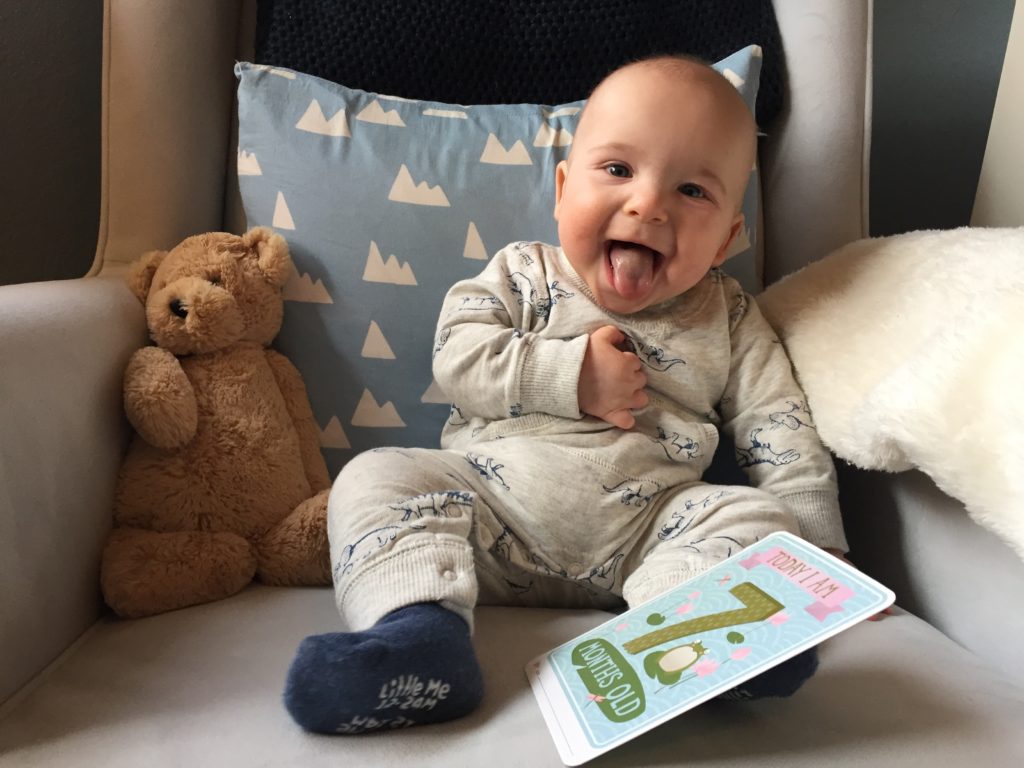 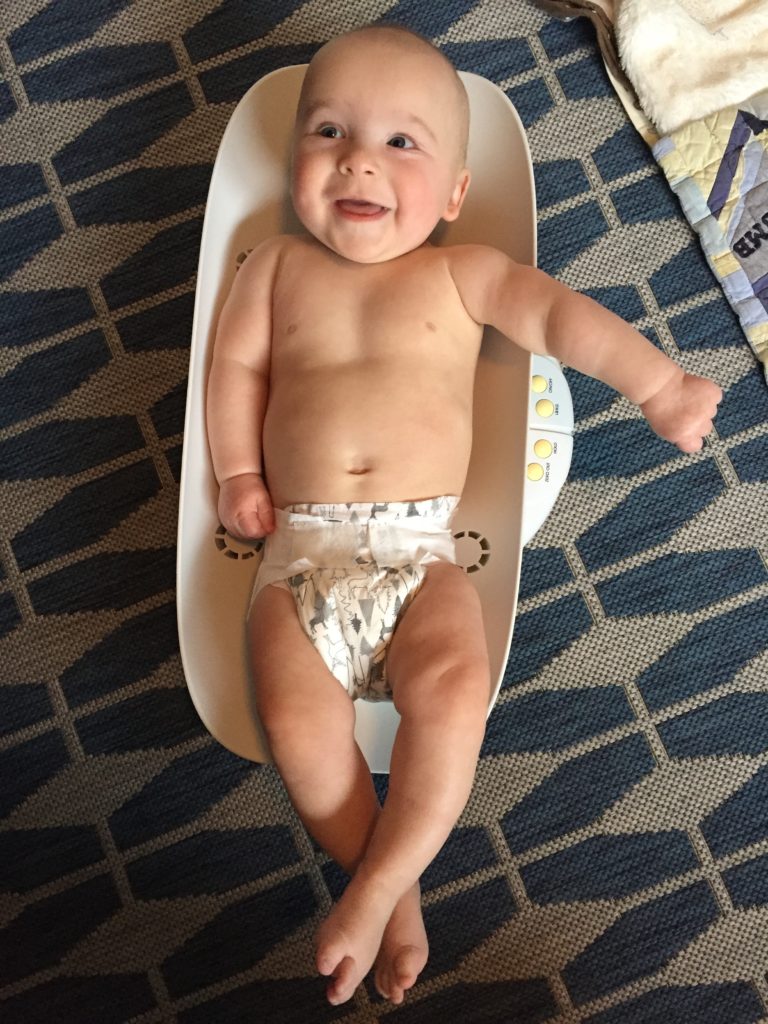 The biggest change in his seventh month is that Ben started eating solid food! We started right when he turned six months old and it took about three weeks but now he’s mastering the pureed foods. When foods have more texture he is still figuring out how to navigate them in his mouth and swallow. 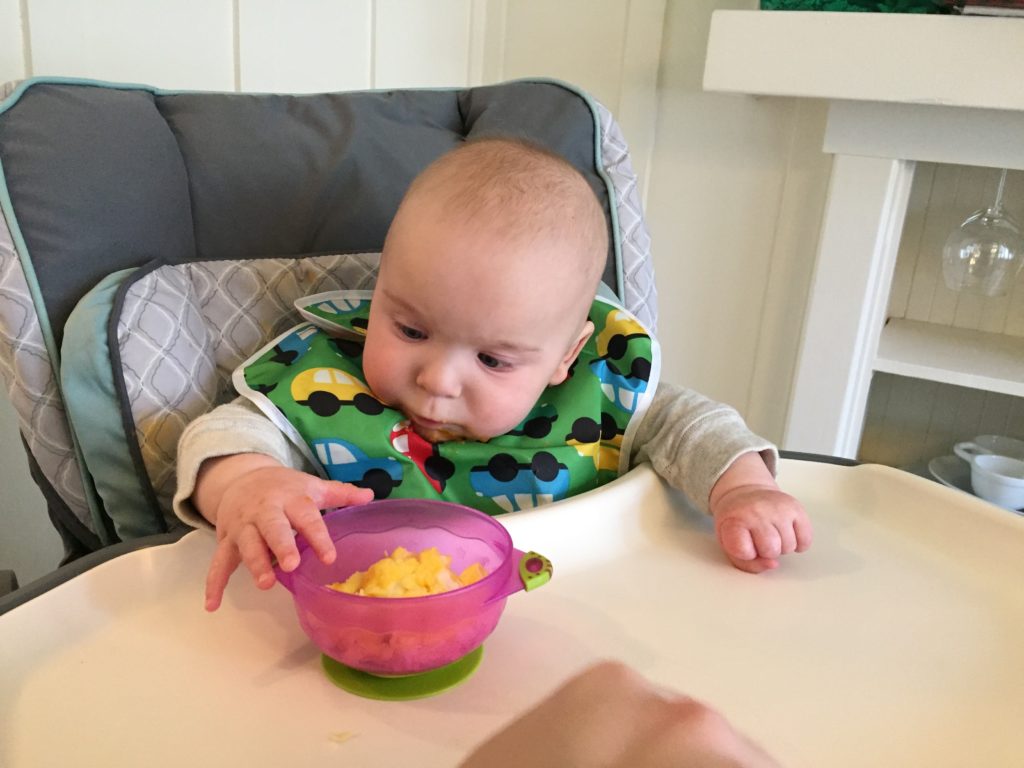 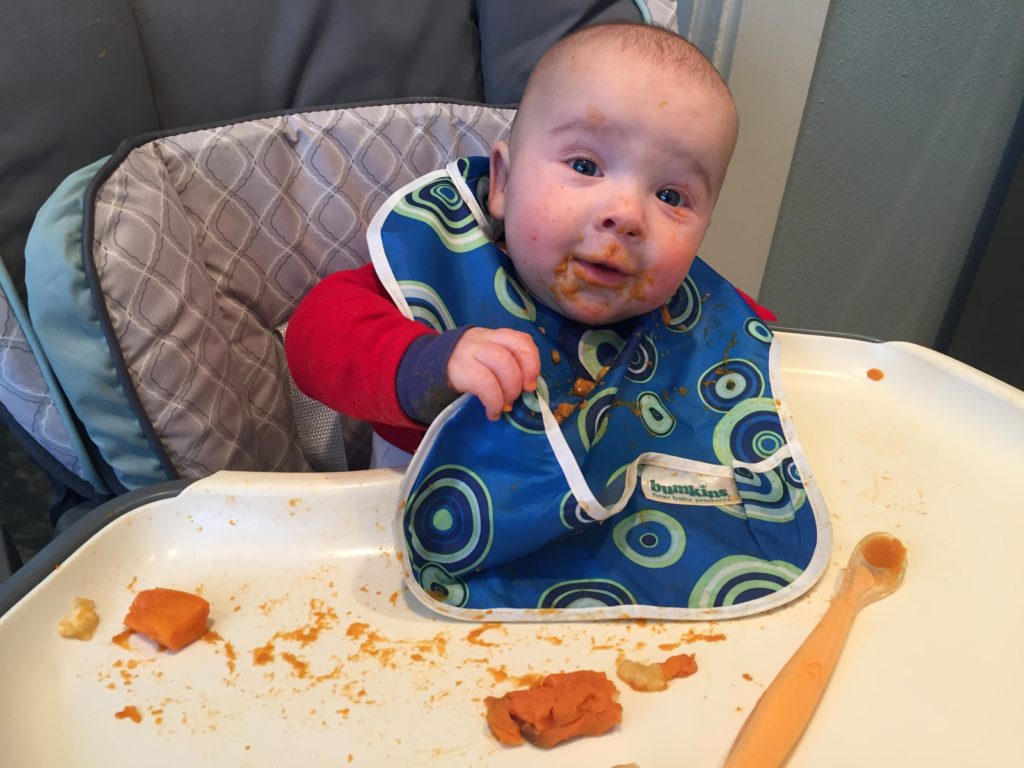 He’s mastered feeding himself with a spoon. I had expected that I’d have to put the spoon in his mouth and feed him but instead I hand him the spoon, usually upside down, and he takes it and puts it in his mouth. Most of the food actually makes it into his mouth, though by the end of the meal he’s wearing quite a bit of it. He loves chomping on the spoon too! Bath time and laundry have become a daily occurrence in this house now, as well. 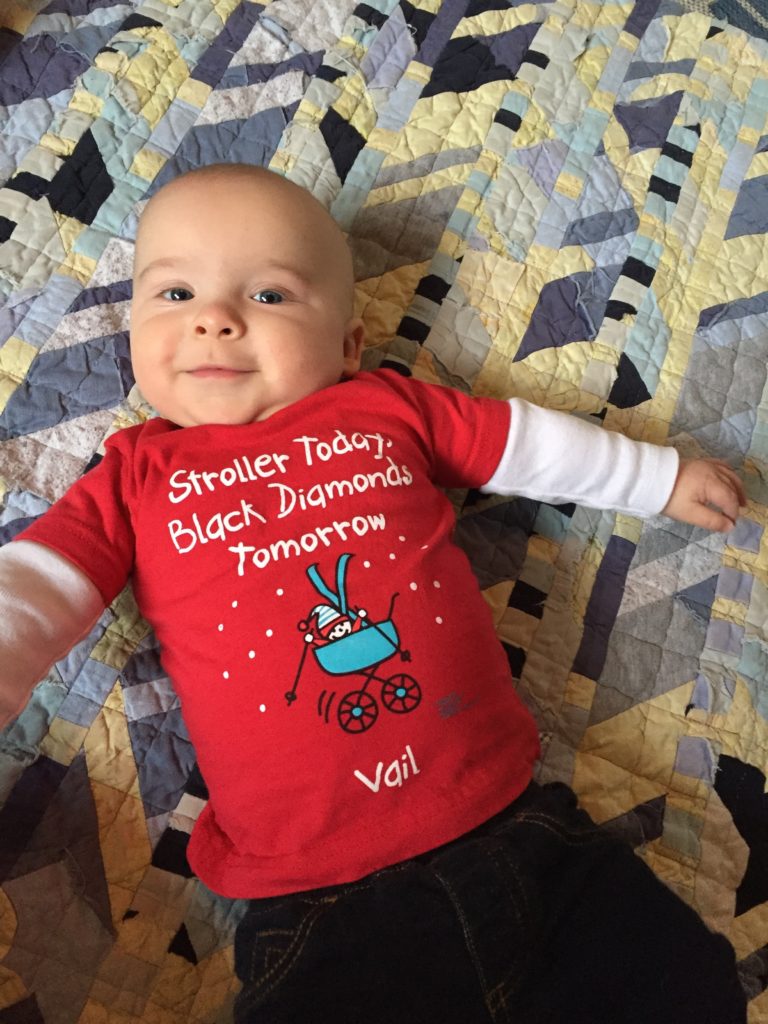 Throughout his seventh month, Ben was seemingly changing every single day! He went through a physical growth spurt and tons of developmental changes. Most of his growth was really small but we noticed day-by-day he would figure something new out or be able to balance better from one day to the next and other times it’s figuring out how to make new noises. I think, though, the thing that grew the most was Ben’s feet. He’s in size 12-24 month socks already! You’re welcome for the big feet, Ben! 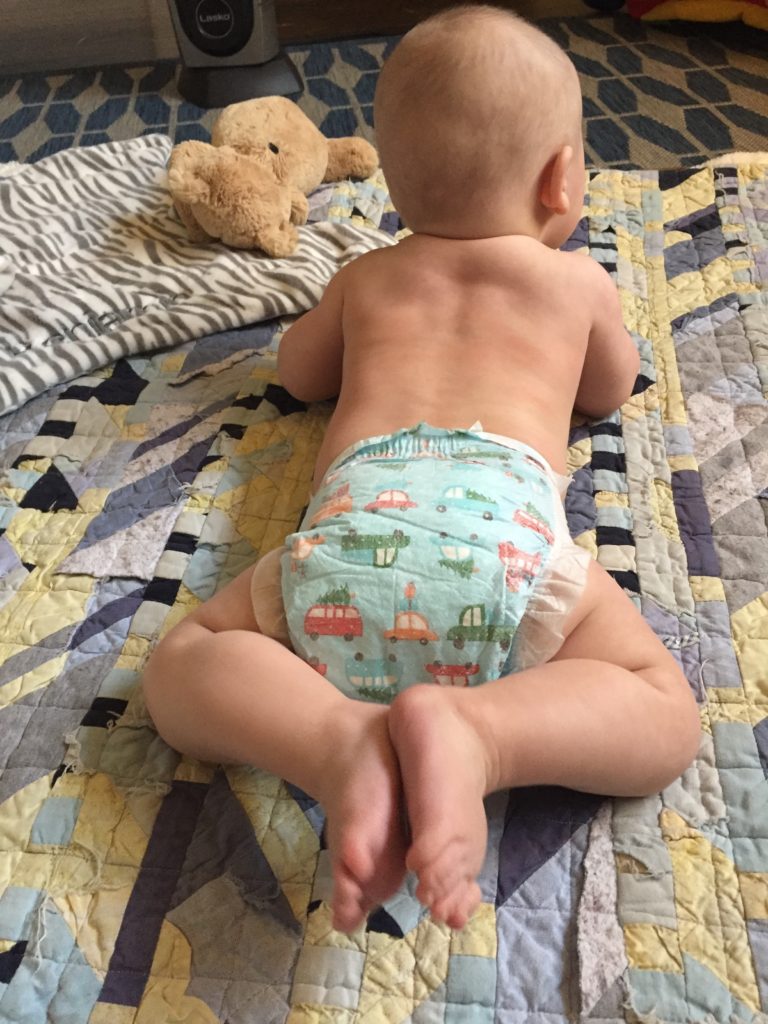 The biggest challenge we had with Ben as a six month old was sleep. He went through a significant sleep regression, likely due to a combination of travel/adjusting to the time change, major developmental changes and learning how to sleep on his tummy.

At the end of his seventh month {within the last week or so} he started becoming more comfortable sleeping on his belly and resumed sleeping through the night. We had a few rough nights in there, though, where we were waking up 8-10 times a night to help him re-adjust and get back to sleep. Needless to say, our coffee intake increased substantially in the month of December. Thankfully, though, it seemed to work itself out and we’ve started to catch up on sleep again. 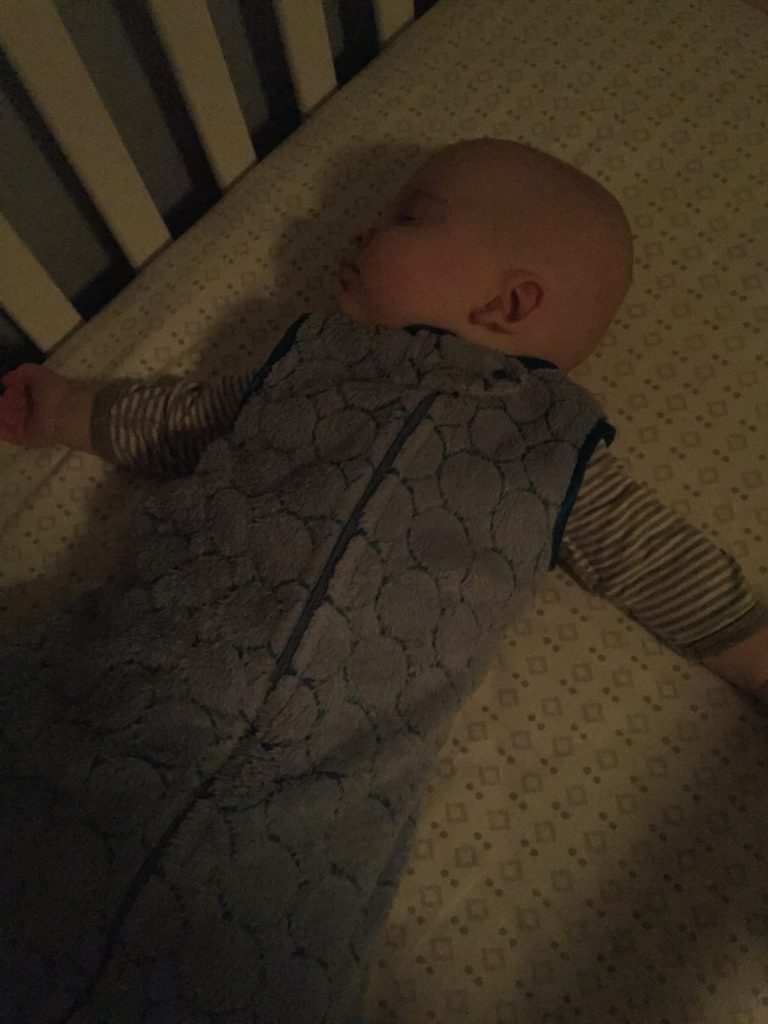 This last month has been filled with physical development for Ben. His physical movements are so much more calculated and solid. He’s not really mobile yet, though he can sort of navigate around his play mat and get to toys by rolling and doing little scoots, but his rolling skills are really improving and his balance and body control is more precise. 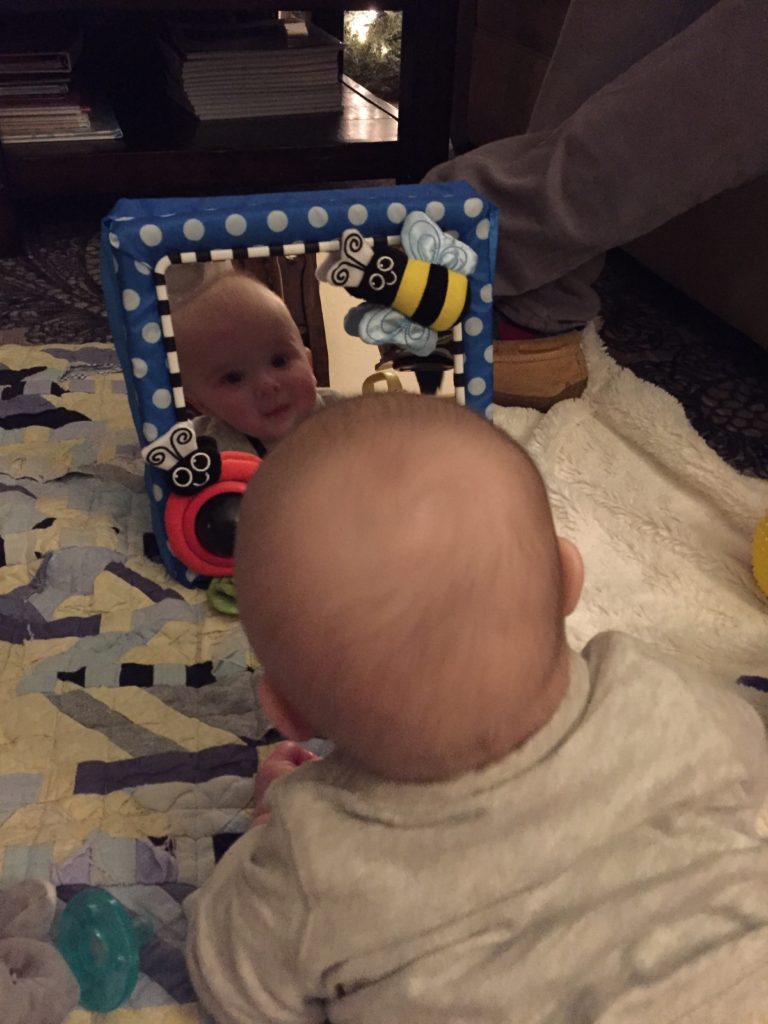 The biggest physical thing that Ben is working on right now is sitting. He is able to sit unsupported for a period of time; however, he doesn’t quite have the core strength and control to keep himself upright 100% of the time. He still tips over if he gets off balance. We’re not able to plop him down on the ground in a seated position and leave him there, but we are able to sit him upright and he’ll stay that way for a few minutes until he gets distracted or over-reaches for a toy. 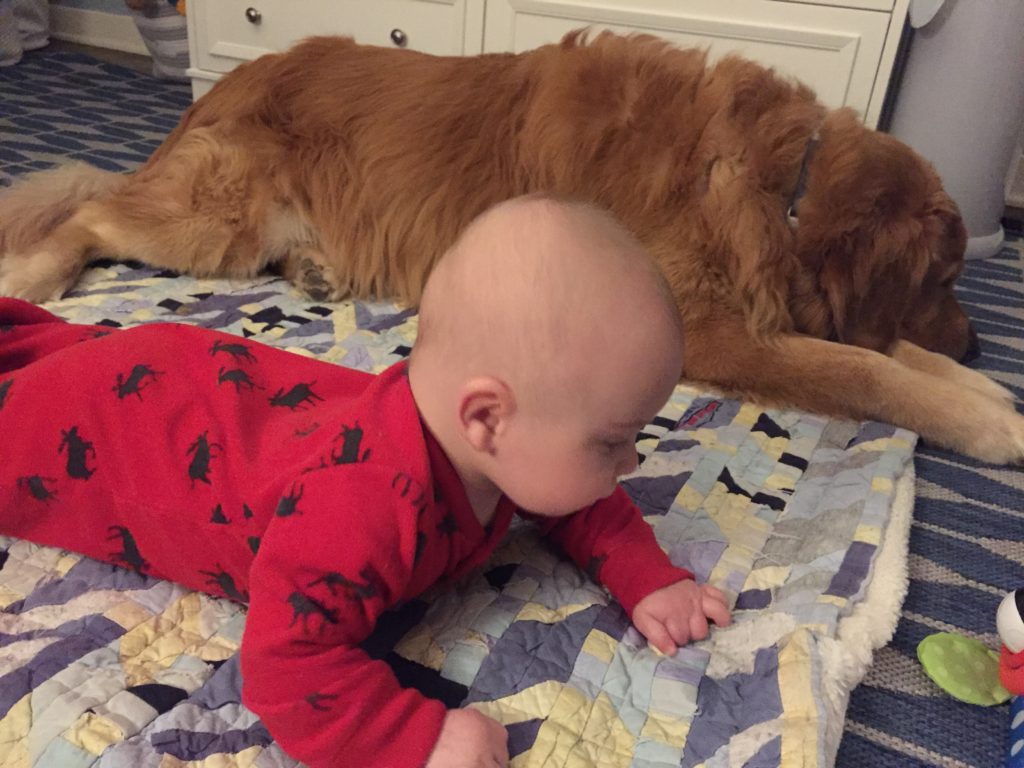 Ben’s personality is really starting to emerge. This kid is so much like his father and he’s got a BIG personality!! He is stubborn, very charming and social, curious, observant, happy and easy to make smile and quite a chatterbox. He’s also quite easily distracted… I think he gets that one from his mother though! 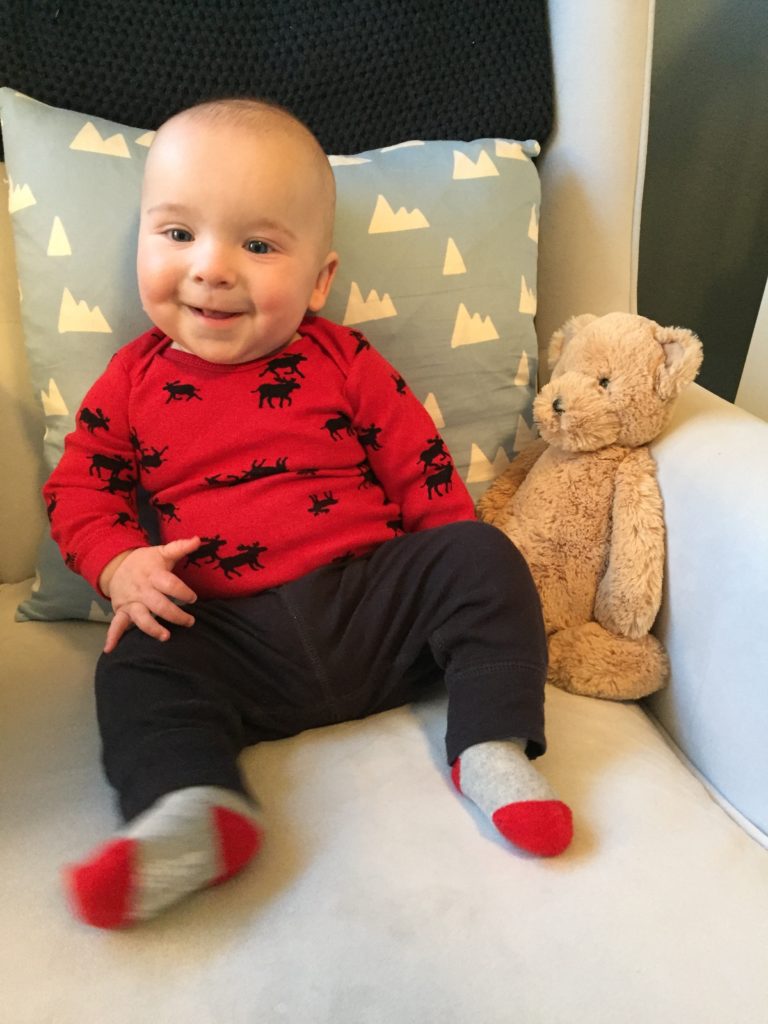 We are having so much fun with Ben and can’t wait to see how much he changes in his eighth month! 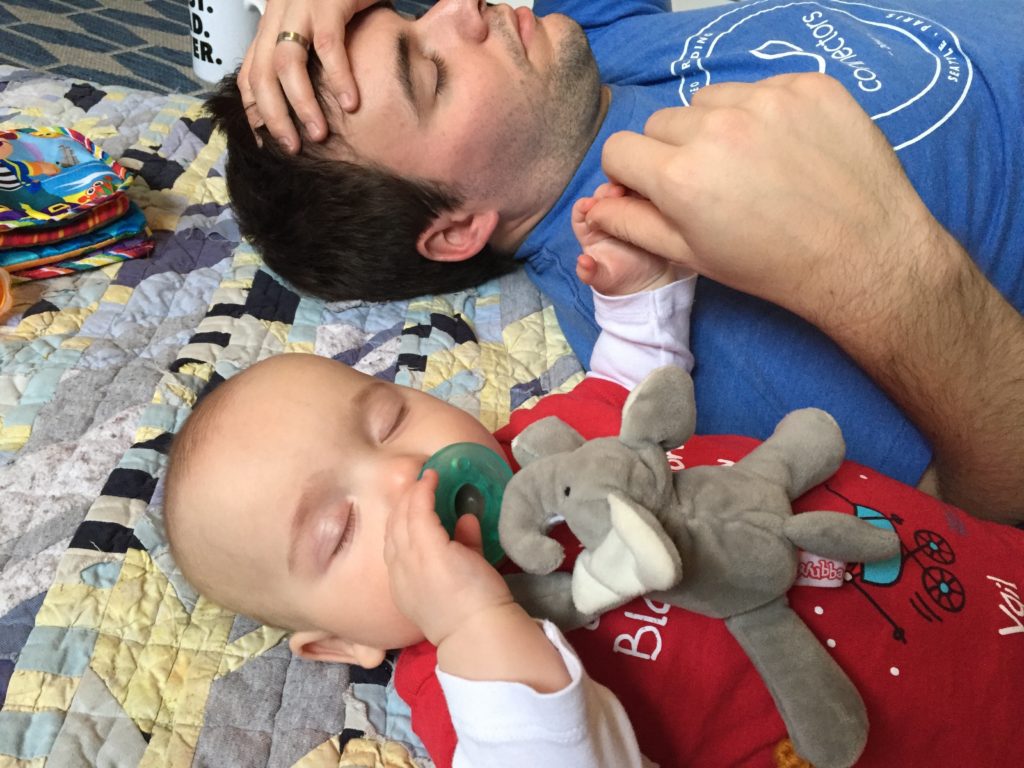