More and more each day this sweet boy is becoming a big kid. He’s growing so tall and he’s so confident and so articulate. Sometimes I’m taken aback by how big he seems. We’re having such a blast with so much about three and love the boy Ben is turning into. 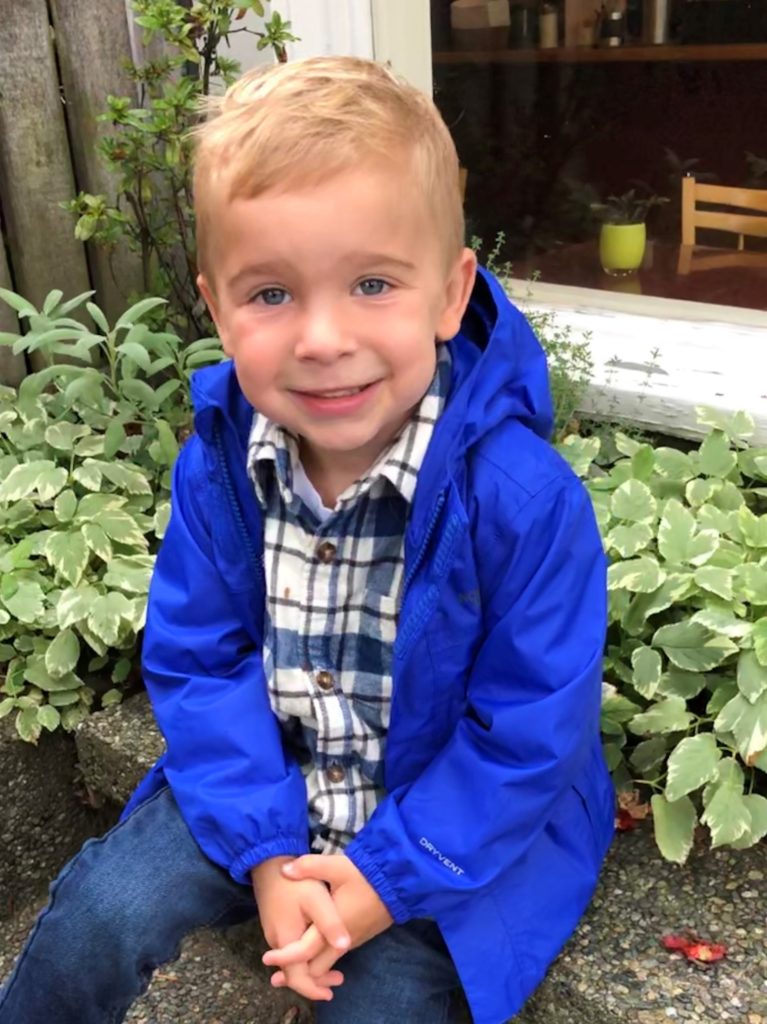 As a 3 1/2 year old Ben is still super sweet. Sometimes I find my heart swelling because of his sweetness. He is a world class cuddler and loves to get cozy on the couch with his stuffies and a blanket. He is so thoughtful, typically quick to apologize or check on someone and so genuine in his random notions of appreciation. “Thank you for building this house for our family, dada!” 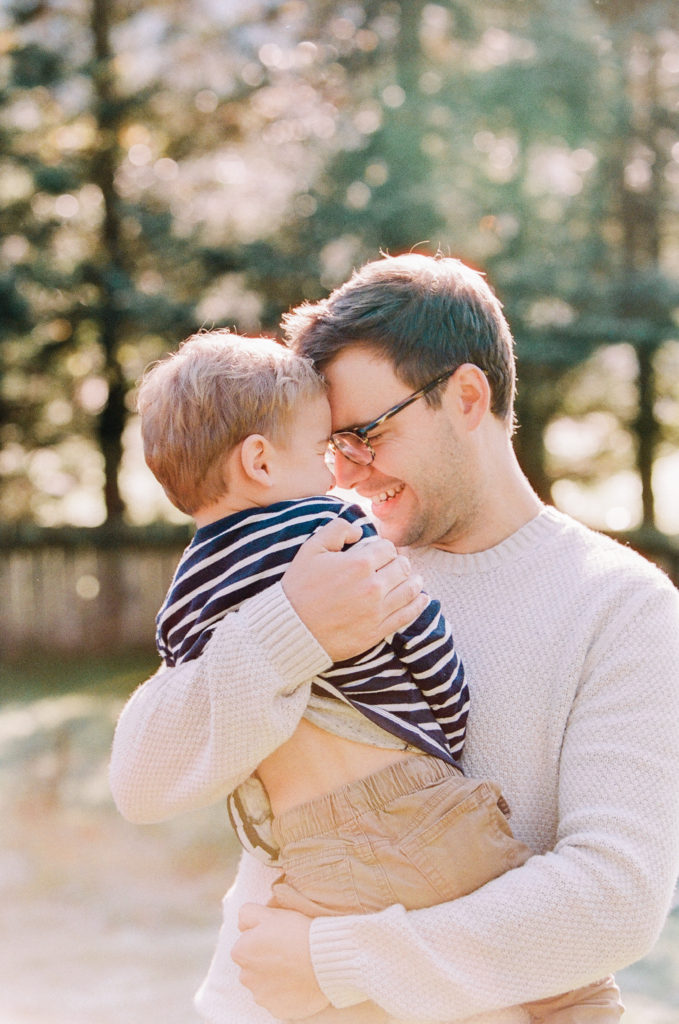 One of my favorite moments with Ben this last quarter was taking him for a bike ride while I ran around the 2.2 mile loop at Seward Park. Seward Park is a peninsula that juts out into Lake Washington. The day of our activity was very chilly but it was a picture-perfect fall day. Ben kept stopping every 25 feet, it felt like, either to wait for me or to take in his surroundings. He kept pointing things out and saying “look, mama! It’s so beautiful!” Ben sure loves nature and he is extremely observant. 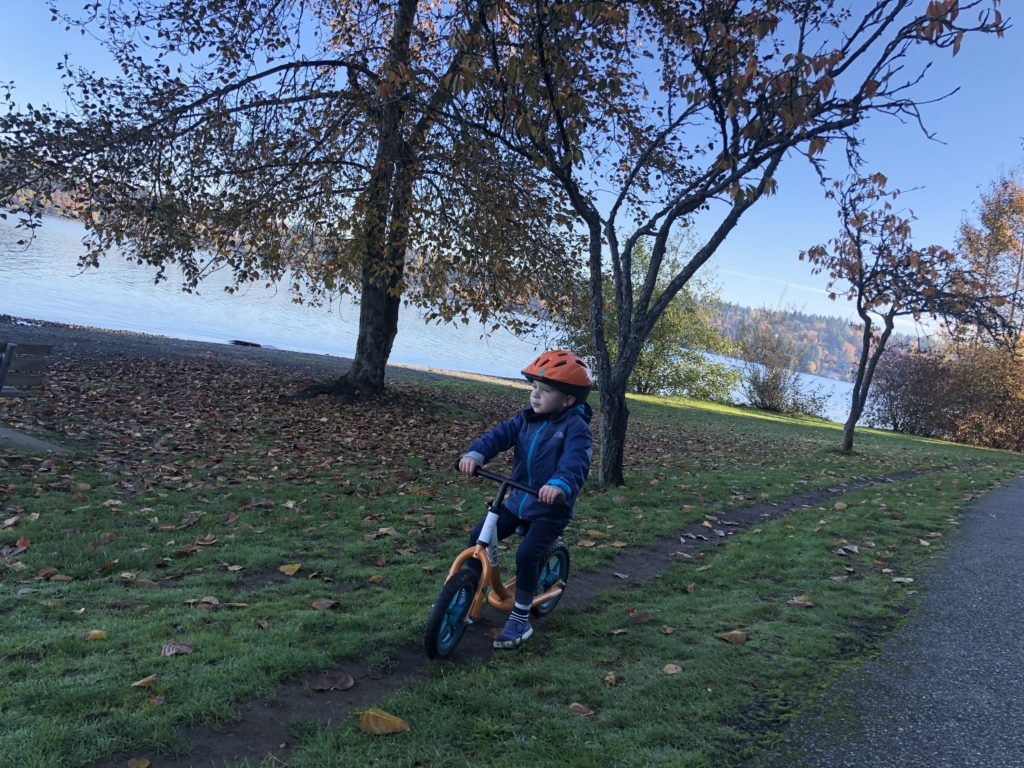 Ben started a new preschool this quarter and I’ve seen some remarkable growth in his independence and willingness to help and take on responsibility. Ben loves being in charge of feeding Jackson, especially at the mountain house. He’s careful to properly measure Jackson’s food for him and also loves to throw Jackson’s ball. Ben has been very interested in selecting and serving himself a snack and pouring anything he can get his hands on. 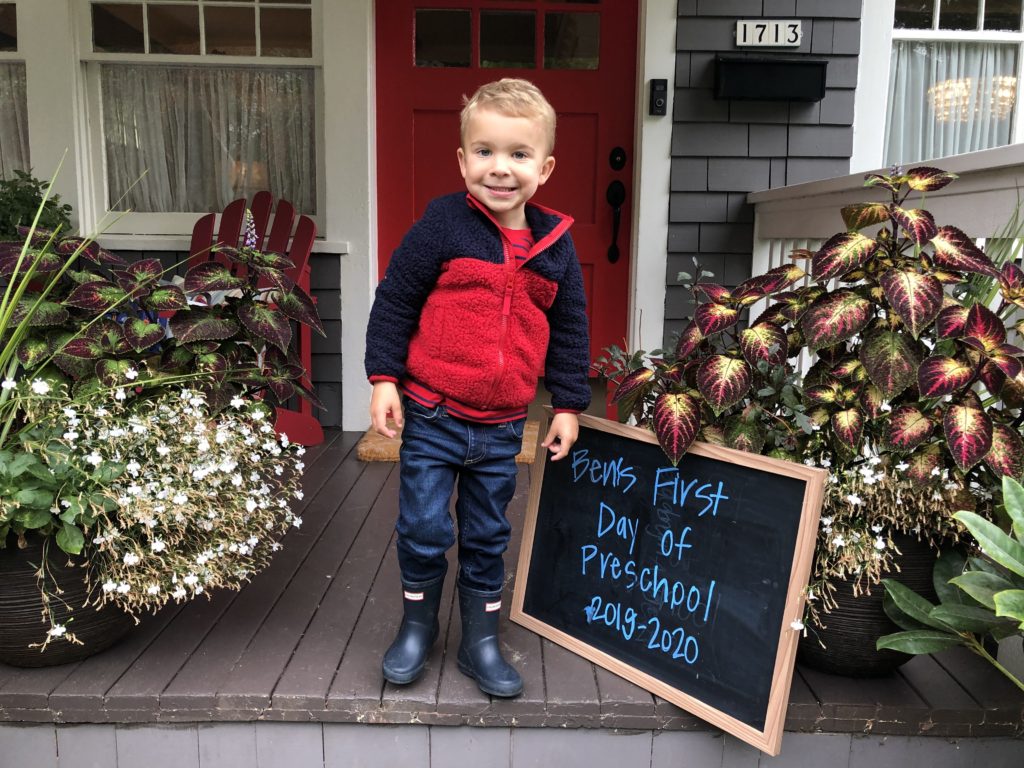 Fairly recently Ben figured out how to ride his pedal bike. This was an unexpected challenge for us all. It took a lot of practice and ultimately finding a tricycle at the park helped him put the pieces together. He’s definitely ready for the training wheels to come off, but now that winter is coming we have decided to hold off on that {we’re keeping that bike at our mountain house}. 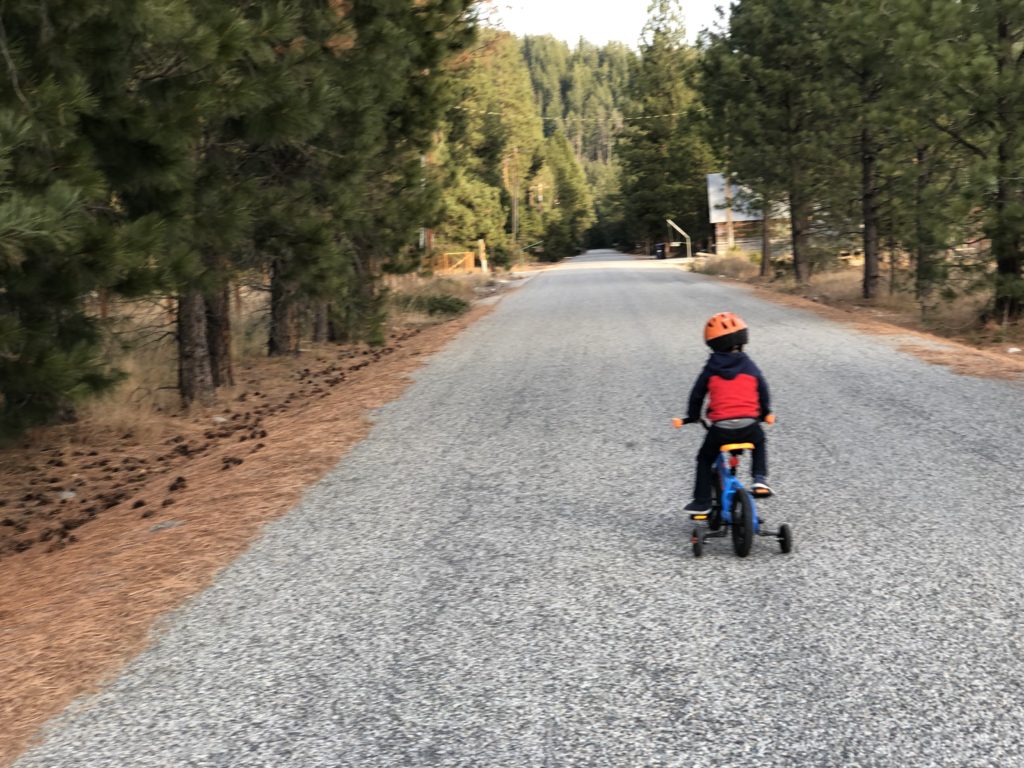 Ben has so much confidence on his balance bike. He’s been going back and forth between his two bikes and it’s so impressive watching him at the pump track as a little 3-year old skirting past the big kids and flying over the little hills. Parents and older kids are quick to comment how comfortable he is there. 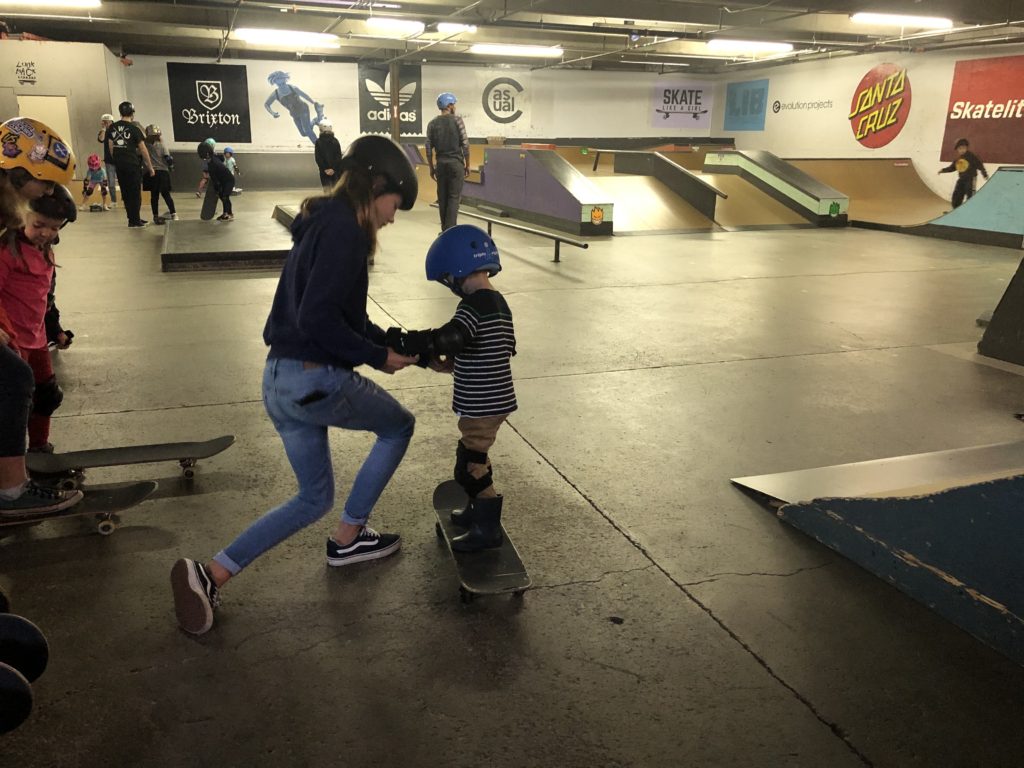 Very recently Ben had the opportunity to try skateboarding. He was very insistent upon giving it a shot and he loved it! 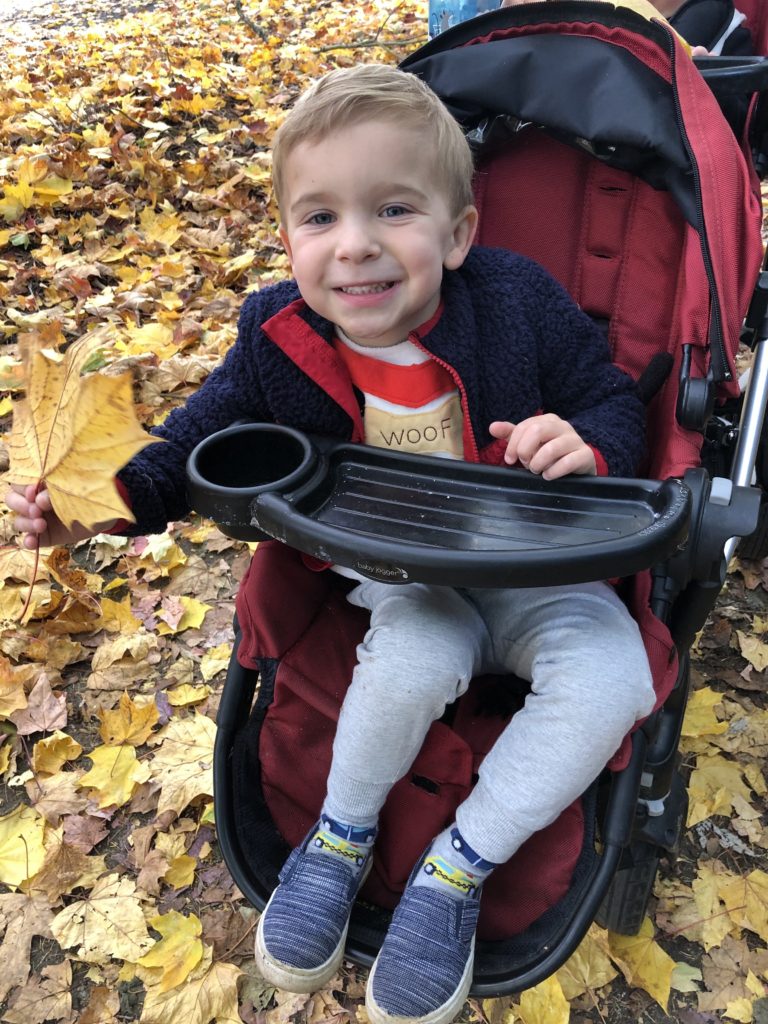 Puzzles, playing games and looking at books have become big parts of Ben’s life these days. He loves to sit down on the floor and put together a puzzle all by himself. We’ve really gotten into some games, particularly at the mountain house, and Ben loves to play Sequence for Kids. 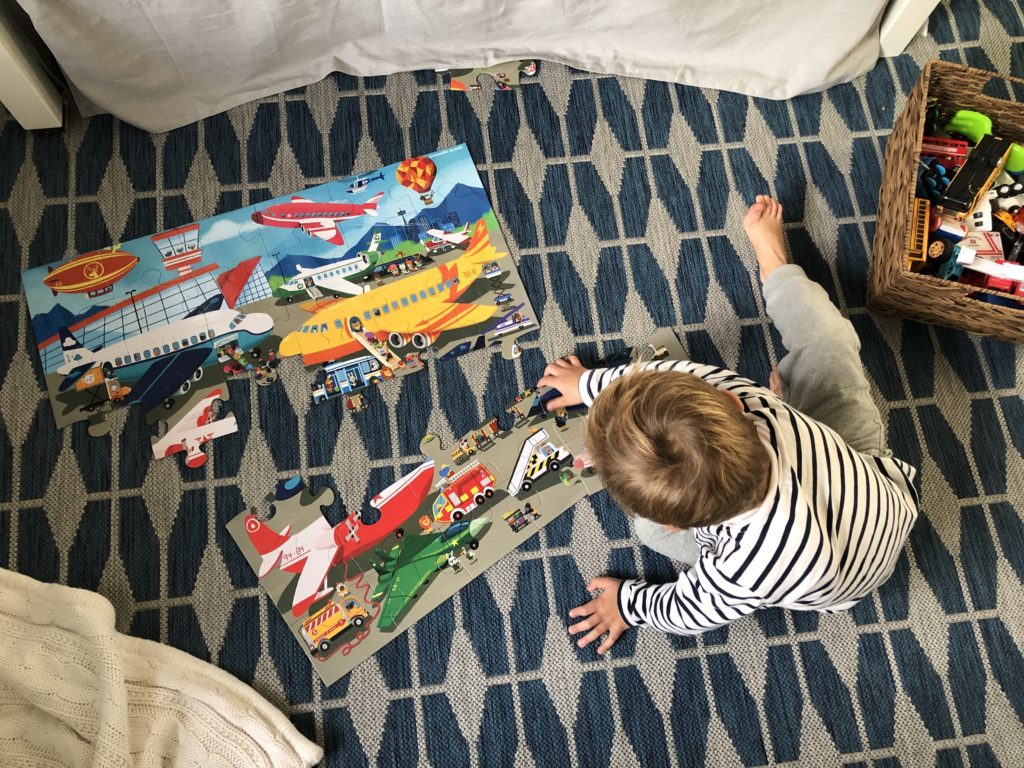 This fall Ben had his first experience with soccer. I signed him up for a soccer program for 3-5 year olds at the park in our neighborhood. It was adorable but in my experience and in talking to the other parents it seems like 4-5 would be a more appropriate age. Ben had a very difficult time becoming engaged in the drills the coach put together. He absolutely LOVES to kick the soccer ball, and he’s really good at it, but when it came time to listen and follow directions he was off doing his own thing. We’ll try again next year… 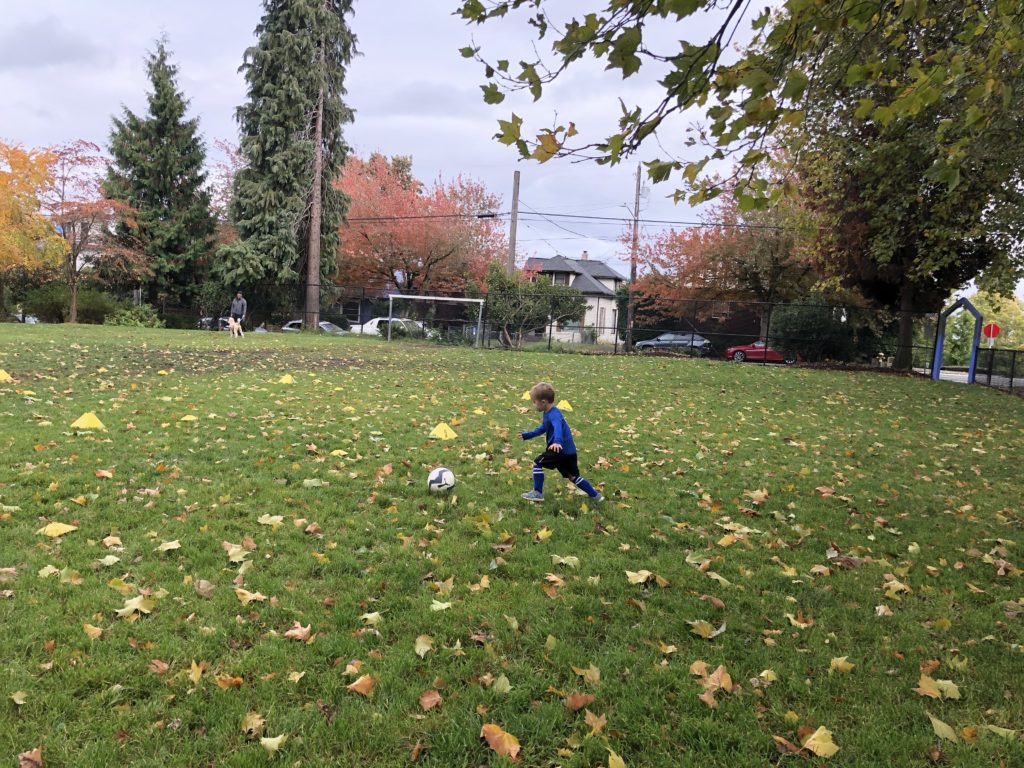 As a 3-1/2 year old Ben is very inquisitive, observant and curious about his surroundings. He’s such a terrific car rider because he loves to look out the window and take it all in. He is now typically awake for most of our drive through the mountains and he does so well entertaining himself with his surroundings or reading a book in his car seat. 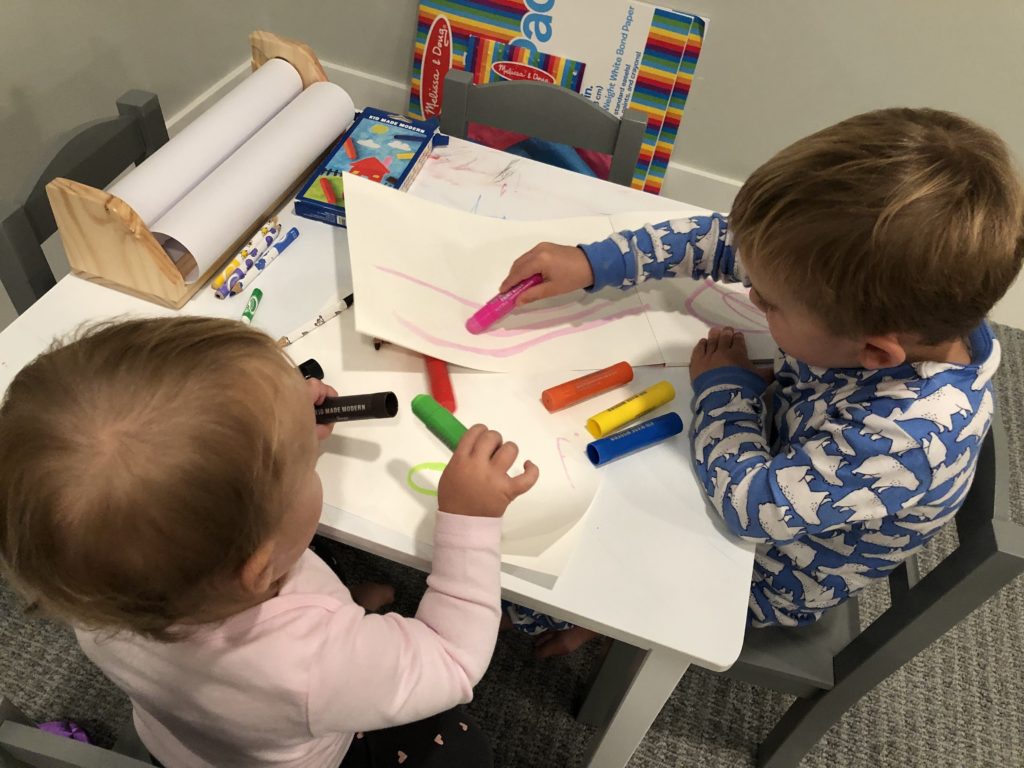 Ben asks a lot of questions and makes a lot of connections. He comes up with the sweetest things to say, like “mama, I think I want to bring Elephant with me just in case I need something to hold” when he was getting ready to go to the park with a babysitter. Or “dada, you look great!” It makes me smile every time he says something is “great!” – his typical response to our inquiries about how he slept or how his day at school was. 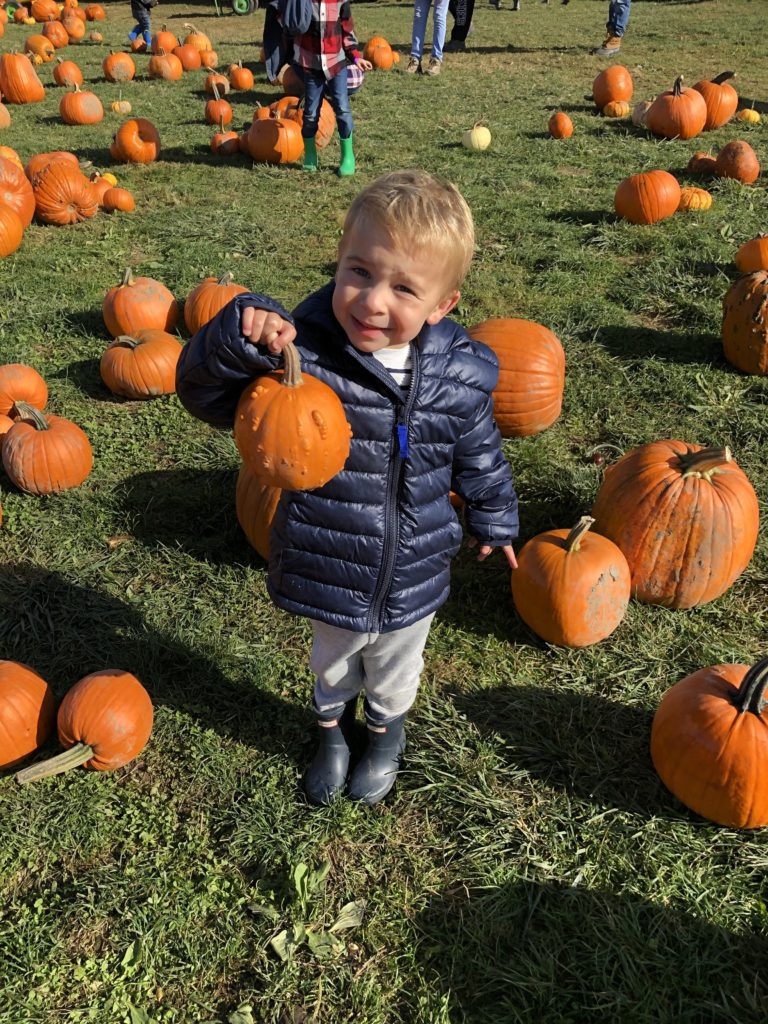 Ben’s teacher at school mentioned he is one of the happiest kids in the class. She found it fascinating and sweet that he regularly comments on how beautiful the day is or that it’s so nice the sun is shining. He has a very positive attitude. It is rare to hear him complain about anything. 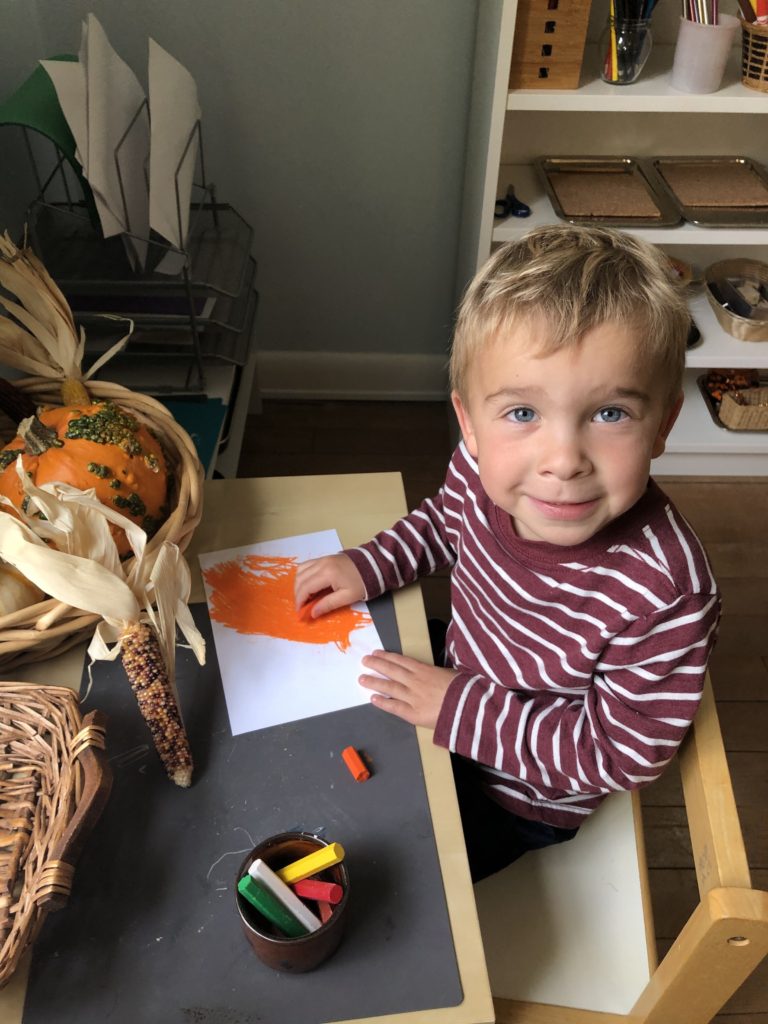 The challenges we see Ben facing these days are fairly minimal. He is quite a sensitive kid and he feels his emotions very strongly. Depending on his mood, this can be tough and he can have a harder time calming down when upset. He also is very compassionate and empathetic. When we came upon a homeless person one day {I had always wondered when he’d start to ask…} and I told him about homelessness his response was “that is so terrible! Can we go say hello to him?” 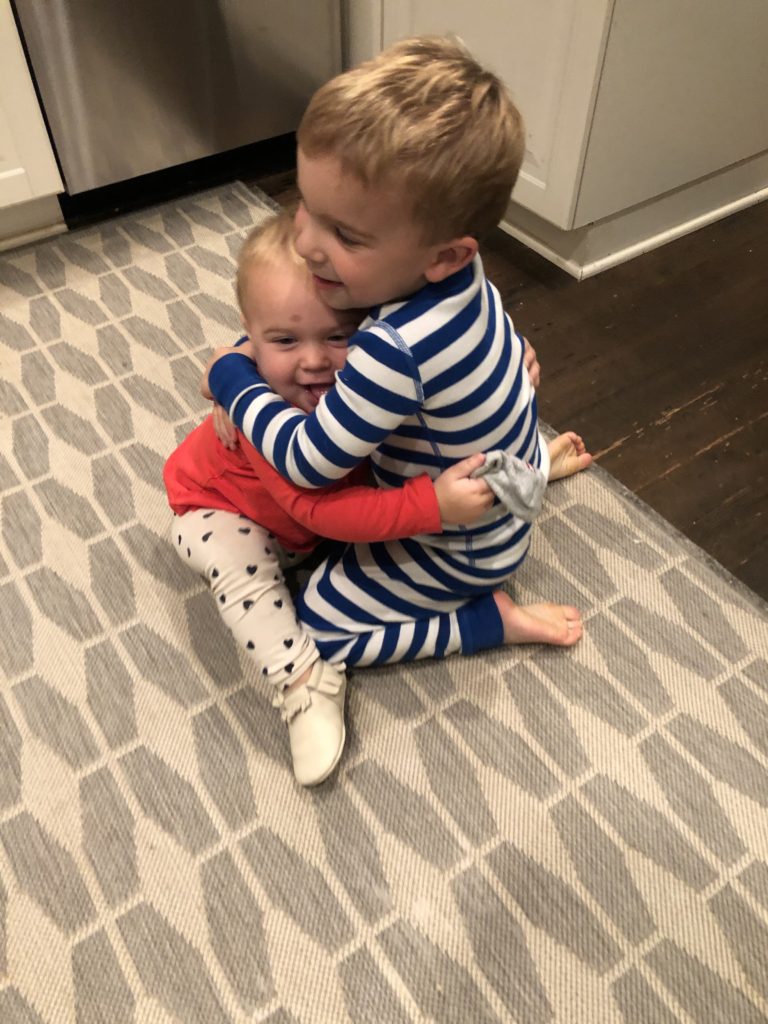 Lately Ben’s friendships are starting to really take shape. He will talk more and more about friends and he has started asking to have friends over. At the park he loves to ride bikes with friends and it seems like that’s a really great tool for him to connect with other kids. 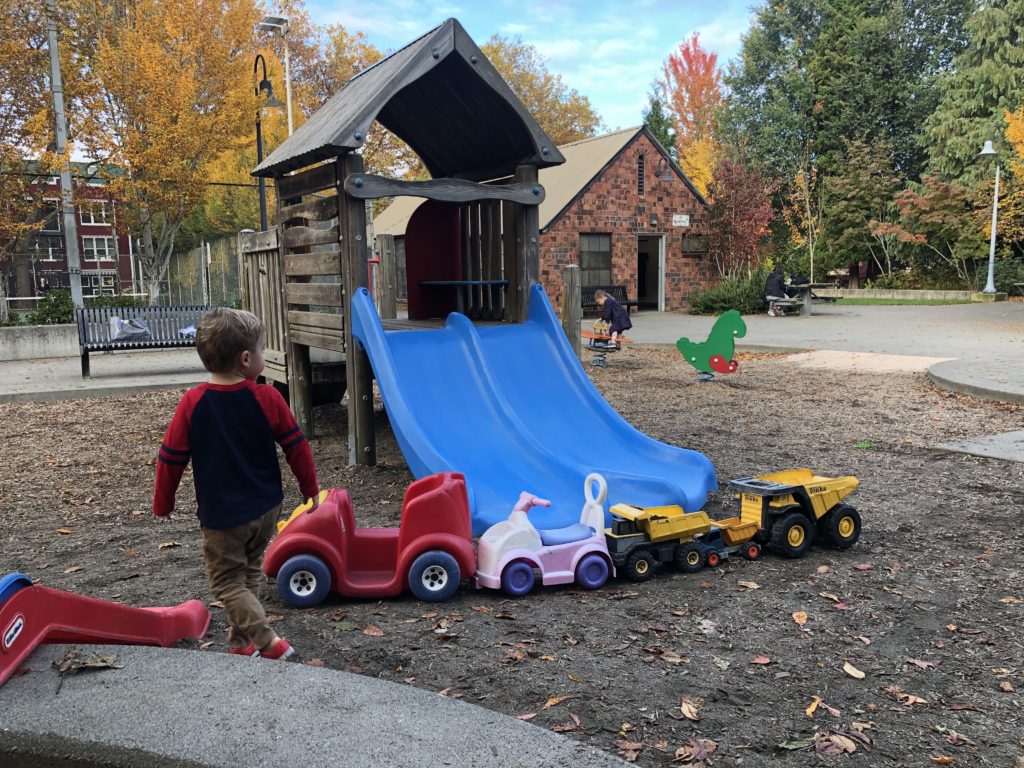 We’ve had a lot of friends come to stay with us at The Lodge and most/all of them have kids near Ben’s age. It was especially fun seeing him with Liam, the only other boy who came up, who is slightly older than Ben. Those two hit it off and had a blast running around, riding bikes and playing cars together. For whatever reason he seems to gravitate towards girls, but he relates to and plays better with slightly older boys. 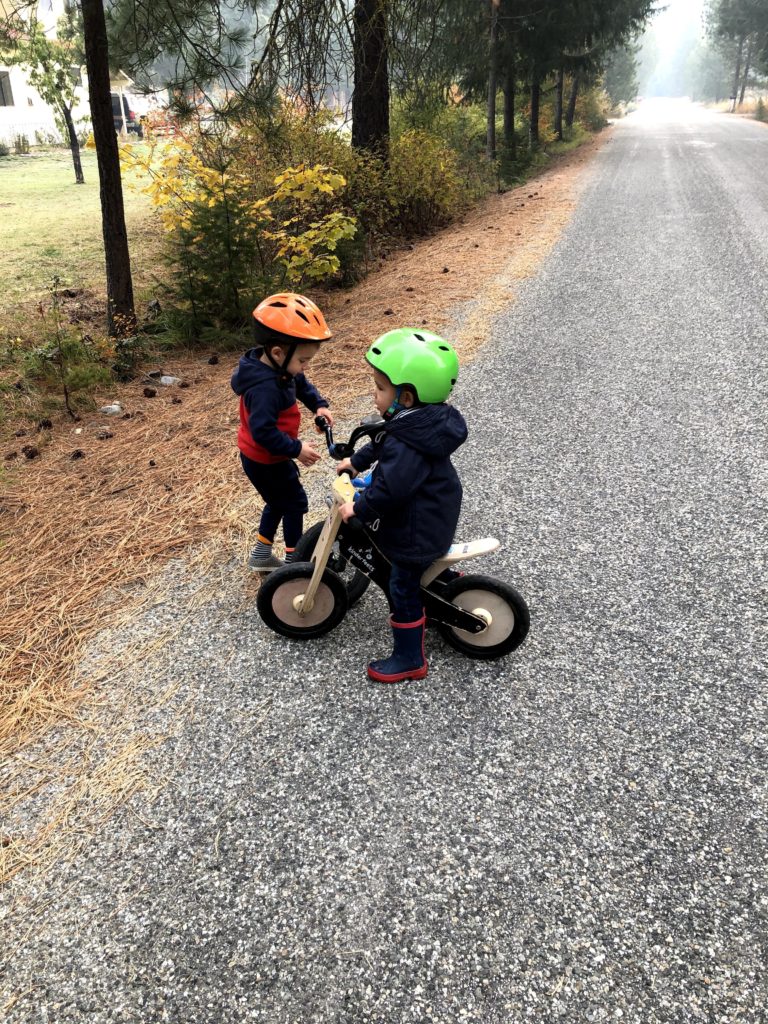 As we officially round the corner towards four I’m so curious what this next quarter will look like – what will the major developmental milestones be? What challenges will come with it? What is on the horizon for Mr. Ben? All good things I expect.