Lake Chelan has been on our “to visit” list for several years and now that we’ve been, I can’t believe it took us this long to make it happen. At 55 miles long, Lake Chelan is the largest lake in Washington and is located in the middle of the state, about 3 hours east of Seattle. The lake is extremely deep {apparently “chelan” means deep lake or something like that and is pronounced “shuh-lan” – with the “a” being like “apple”} and is surrounded on both sides by beautiful deserty mountains. The lake is pretty populated in certain areas and is also known for its cute, charming towns and abundance of wineries – it is in Washington wine country, after all.

This trip was extremely impromptu and planned entirely by Alex. He and his friend Nigel signed up for the Lake Chelan Rotary Century bike ride, a very challenging 100 mile bike ride around the area. Since Alex was planning the trip he was in charge of figuring out our lodging arrangements and boy did he deliver.

I was especially impressed given the last minute nature of our trip, but he found an adorable place called Kelly’s Resort, which is a waterfront resort that has a bunch of stand-alone cabins, a beach, walking trails through the woods and it just oozes charm and character. It really reminded me of my family’s lake home in Minnesota. We really lucked out, too, because this was the last weekend of their “off” season rates, so we got a great price for the cabin.

We made the 3 hour trip over to Chelan on Friday afternoon and miraculously didn’t hit any traffic at all. Once we got settled into our cabin we headed down to the bottom side of the lake to pick up Alex’s biking packet and meet Nigel and Jolene for dinner. We settled on a cute pizza place called Local Myth and really enjoyed our dinner, though were disappointed to have been seated in the only “non-alcoholic” table {the table was on the outside of their fenced in patio area} so we couldn’t order any wine or beer. By that point it was 8:30 and we were ready for dinner so we didn’t put up too much of a fight, plus it was the only outdoor table that would have accommodated the four of us. 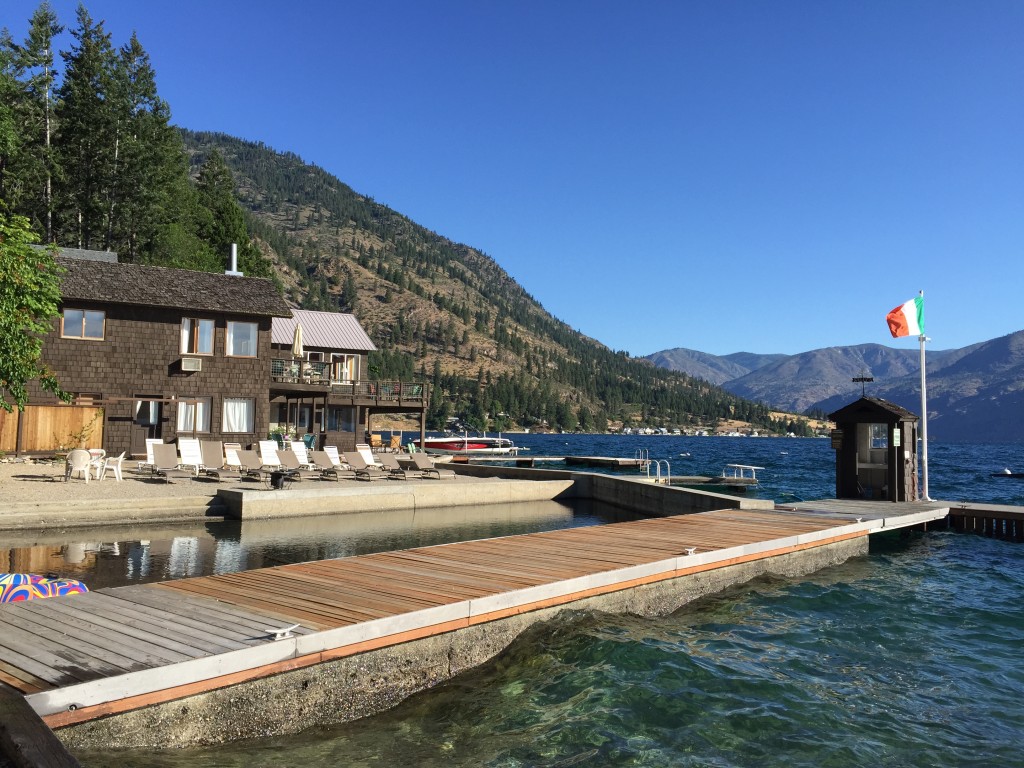 Bright and early Saturday morning, I dropped Alex off at the start of the bike race and he and Nigel met up and got started. The ride was very challenging – it was 85 degrees by mid-ride and being in the desert, there was virtually no shade. The ride was broken out into three loops that all started and ended in the same spot, so in theory you could do one, two or all three of the loops.

Alex’s goal for the day was to make it to the top of a massive 3,000 vertical foot climb, which was over the course of 6 miles {a very short distance for that much climbing} and averaged around 10-12% grade {very steep!}. He said the hardest part was how hot it was and how limited the shade was, but he and Nigel both made it to the top. Mission accomplished! Alex achieved his goal and that was good enough for him, while Nigel’s goal was to complete the 100 mile ride. Alex decided to call it after 70 miles, so I ran over and picked him up.

The bike ride lasted from about 7:00-2:30, so while Alex was biking I was back at our cabin with Jackson. I took him for a 40 minute swim right off the bat – he is such a water dog, so I figured that would be a good place to start!

I was just enjoying being down on the water – the view across the lake was gorgeous. And the water itself is so clear and clean and just looks different because of that.

After Jackson tired himself out I grabbed a cup of coffee from the little coffee shop and sat out on the deck of the main lodge with Jackson and just relaxed for a bit. Then we headed back to the cabin and went for a walk on the hiking trails up the hill. I got in my 10,000 steps pretty early that day! 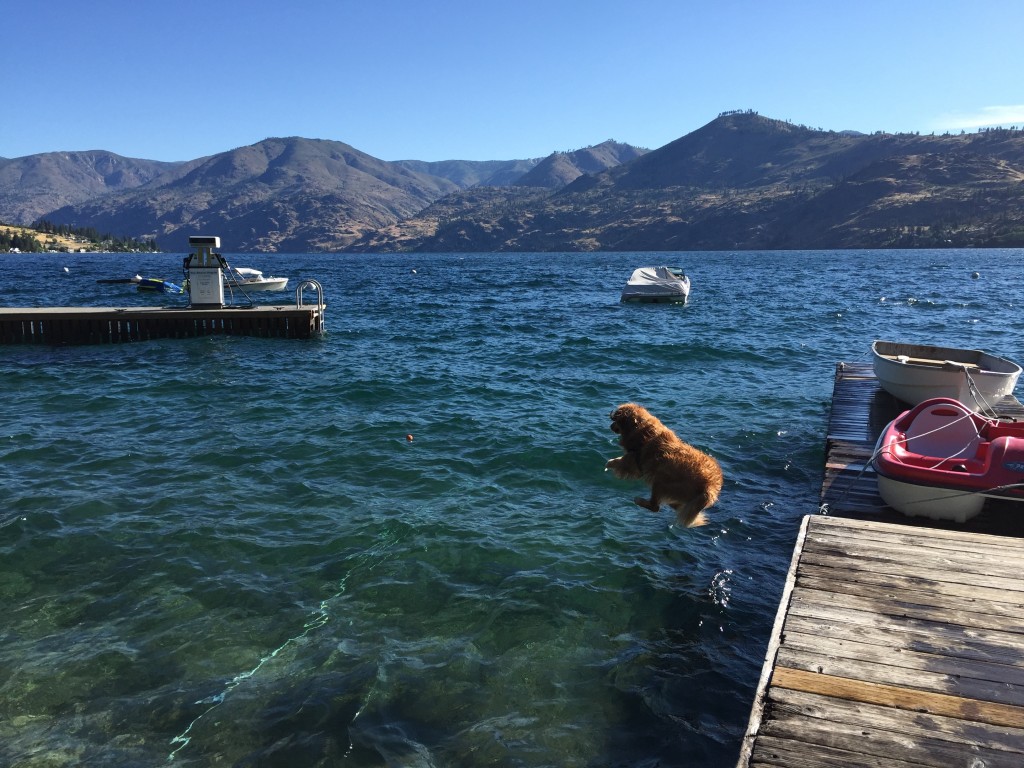 The rest of the day was mainly spent on the deck of our cabin, which overlooked a lot of mature evergreens, as well as the lake. I caught up on some reading and just did some relaxing until I picked Alex up. 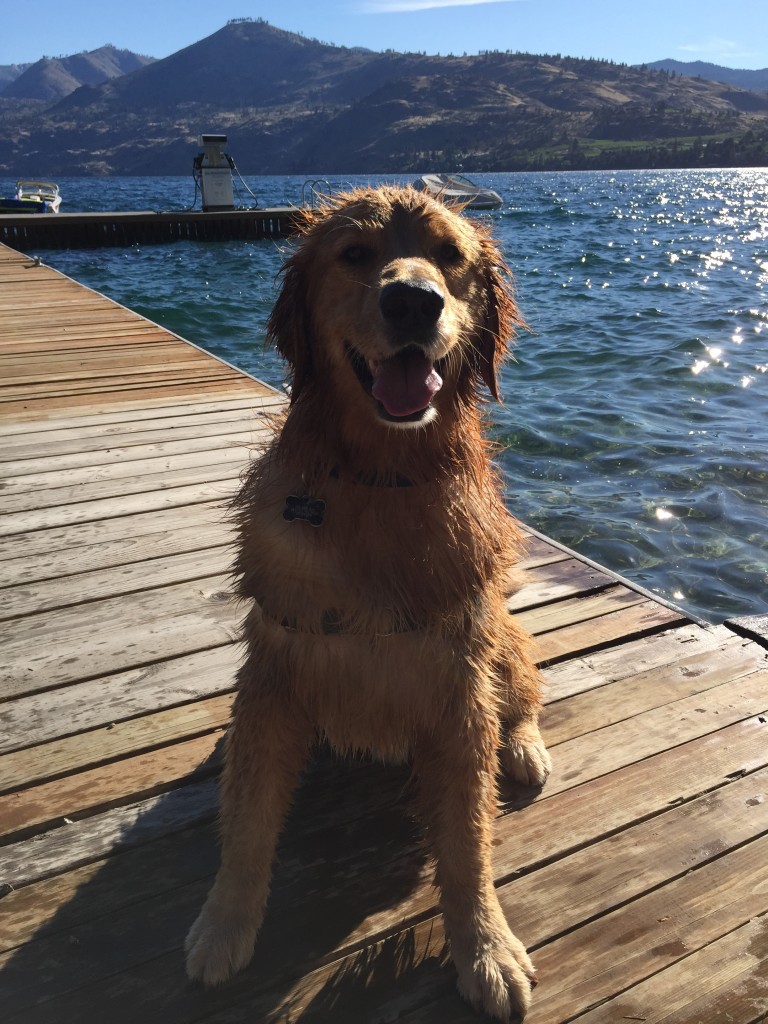 Of course Alex was beat when he got back to the cabin, so we just hung out for a while and then got cleaned up and headed out to meet Nigel and Jolene at a winery called Tsillan {pronounced like Chelan}, which was conveniently located adjacent to Sorrento’s, the restaurant we had dinner reservations at. The wine tasting was great and we lucked out in getting the best seat in the restaurant for dinner. This restaurant was voted to have one of the top 100 restaurant views in the country and it didn’t disappoint! We all really enjoyed the food, too.

On our way out of the restaurant our car had an unfortunate mishap with a decorative pillar, conveniently located in our blind spot, so hurrah, we get to get a new front bumper. The car just turned too sharply getting out of the parking space and Alex couldn’t see the pillar in the mirrors or the backup camera. Oops! 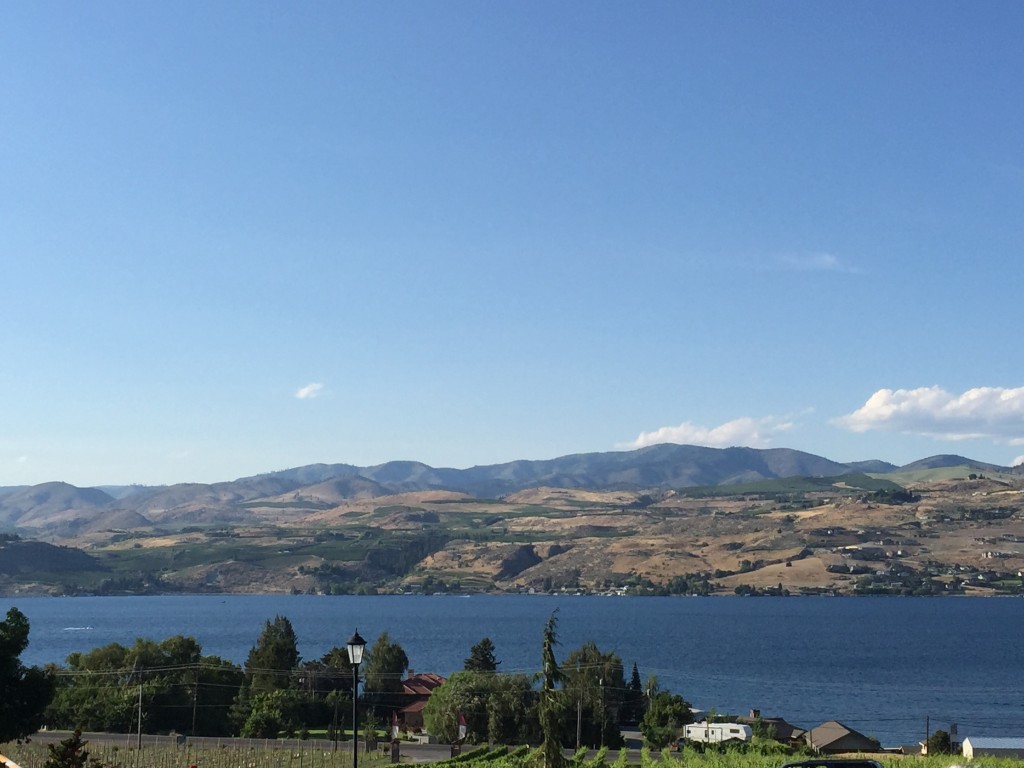 Our last day in Chelan was a short one – we took Jackson swimming one last time, packed up and hit the road. We stopped at Twin Pines, a cute little townie hamburger joint just off the highway, which was surprisingly awesome {so much for eating light…}, and then spent the rest of the afternoon unpacking and relaxing in the sunshine.

….until next time, Lake Chelan! I have a feeling this will become an annual summer trip for us.