Every day Ben continues to demonstrate how much he is learning right now – it is such an incredible thing to experience as a parent. Our little tyke is 16 months old now and his language and communication skills have exploded over the last few weeks. That has been one of the highlights of the last month. 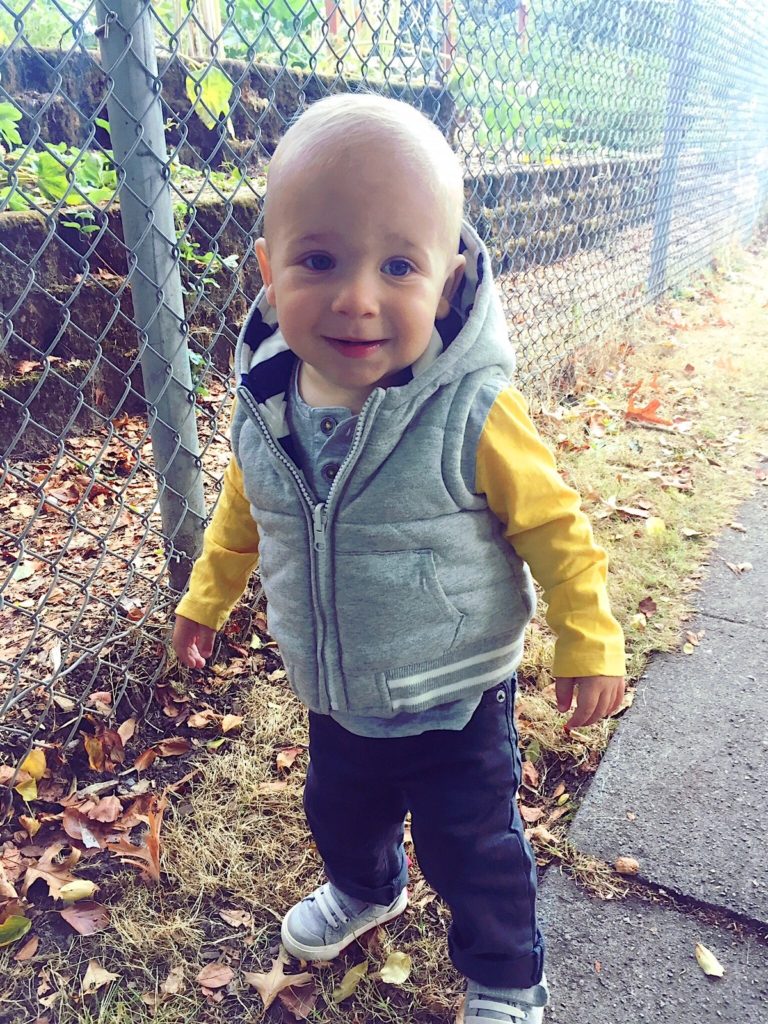 Because of our recent vacation, Ben only just had his 15-month check up last week. The doctor gave him a clean bill of health, along with four vaccines. We were excited to see Ben break through the 10th percentile in weight for the first time – he’s now in the 15th percentile! For height he’s around the 40th percentile. As of last week, Ben weighed 21 pounds, 14 ounces and was 30 3/4 inches tall. 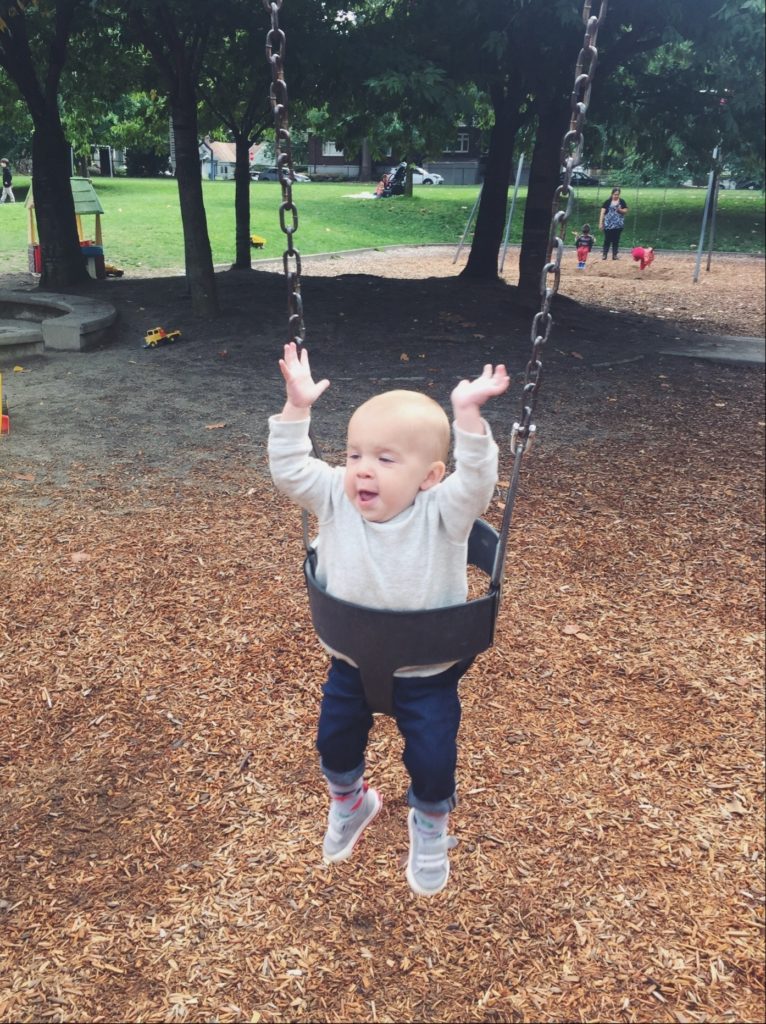 We have been having so much fun watching Ben learn to talk recently. He had been repeating words for a while and began to build up a vocabulary with proper association. Today he has a vocabulary close to 30 words, I bet. It seems like he’s learning a new word or two every day. I’m pretty blown away at how much he is able to communicate. His doctor let us know that his vocabulary is much more advanced than his age, which I had no idea. 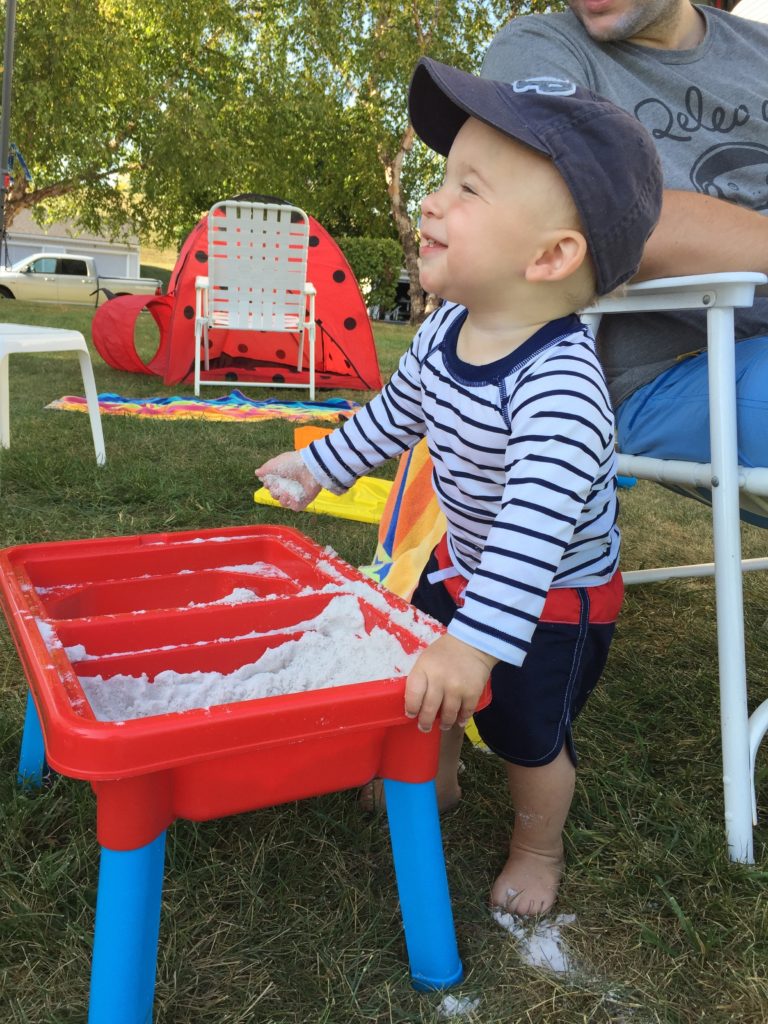 It’s hard to say what his favorite words are at any given point, but they definitely include:

Ben picked up on the baby sign language pretty quickly around 12 months. We taught him a few signs for things like “more” and “water” and “milk” – it’s really helped him figure out how to communicate with us. While we were on our recent trip Ben came up with his own sign for “hungry” or “eat” – he just started pointing to his mouth when he wanted some food. He’s very good at pointing at something and saying “that” which is super helpful so we know what he’s asking for. 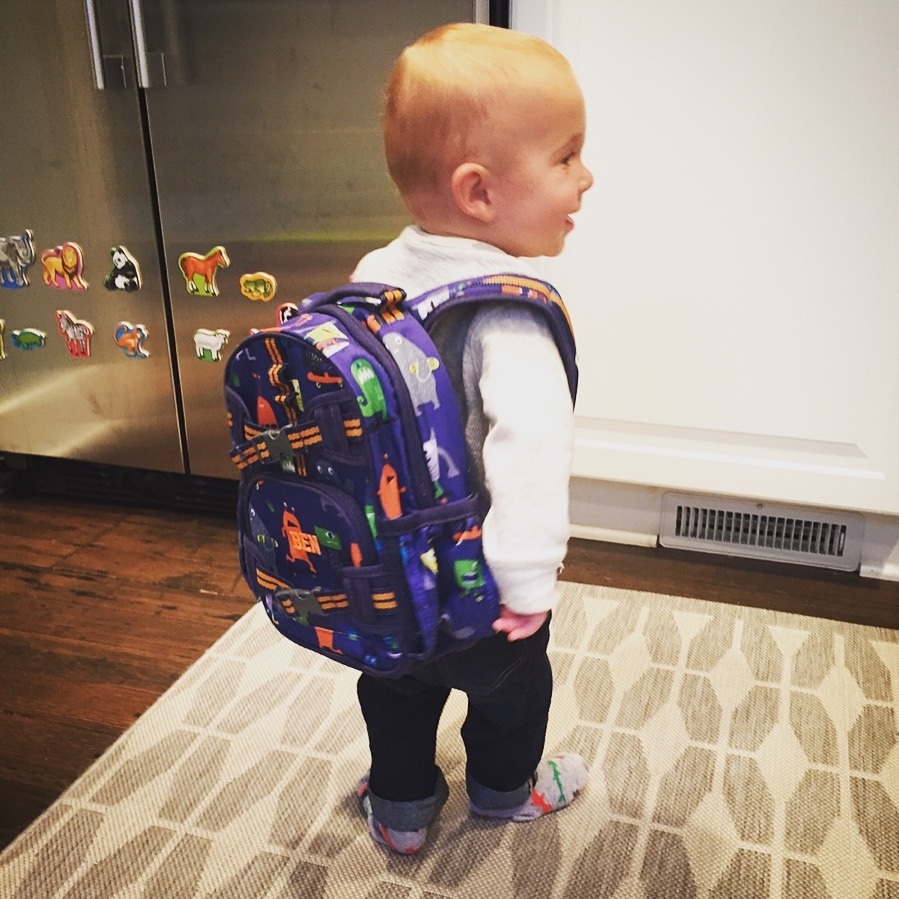 What’s possibly even more fun is the associations Ben is making. His nanny sings songs with him all the time and he’s learning random words from the songs. He can point to and say “ceiling.” “floor,” “window,” and “door” because of a silly song. He can identify his head, nose, mouth, tummy, feet and ears and can clap his hands. He is starting to be able to point out animals in books, in person or on the refrigerator magnets. There are a few animal sounds that he makes, but mostly just the name of the animal or he can point to the animal if you say its name. I just cannot believe how much his language skills are developing right now. 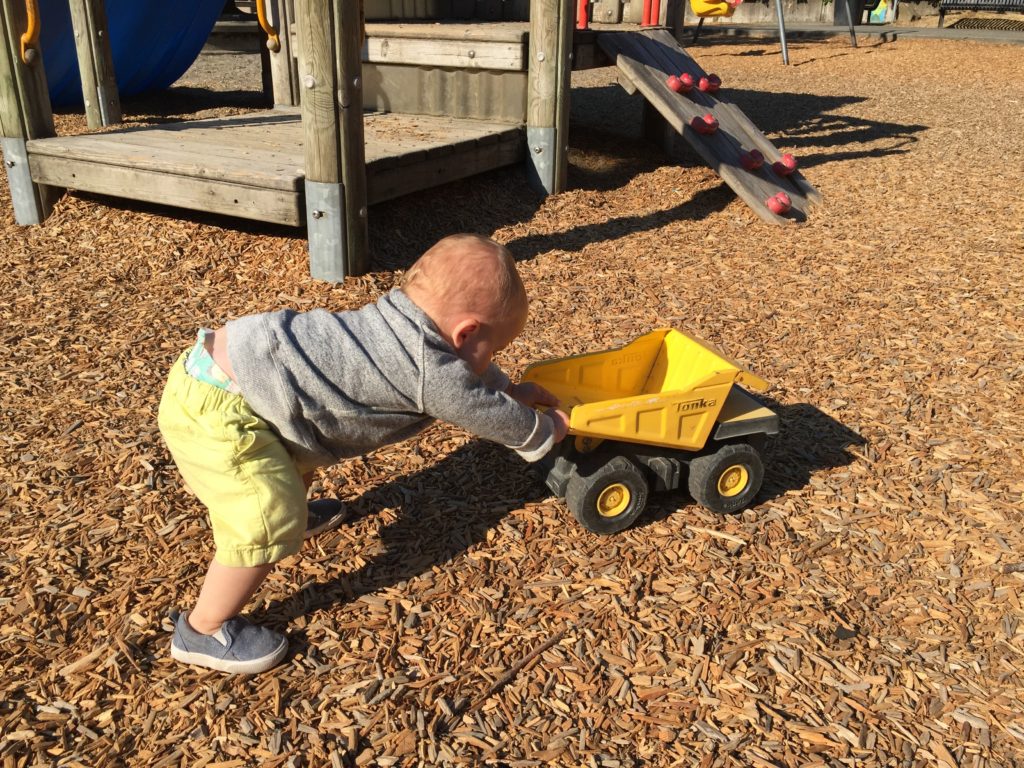 In addition to communication, Ben’s physical skills are developing and he has become super stable on his feet. He’s beginning to pay attention to uneven surfaces and he’s falling a lot less {though he did just take a nasty tumble, nose first, into some concrete at the playground over the weekend}. 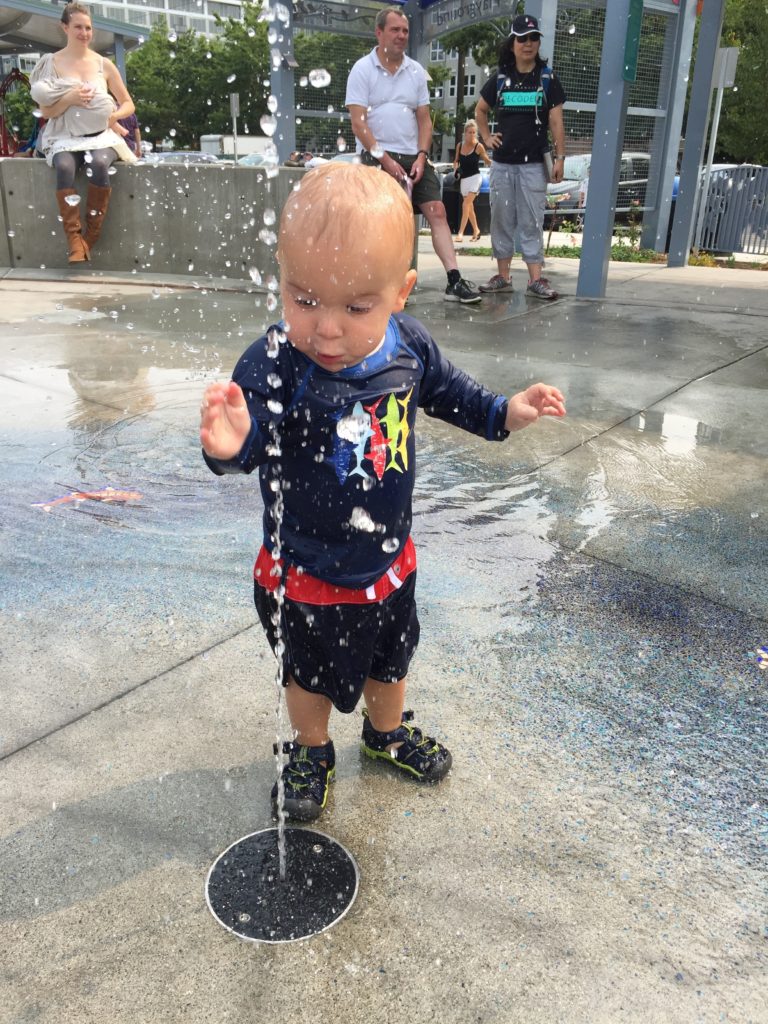 Ben has taken to scurrying around the house these days. His “scurry” is somewhere between a walk and a run – he’s moving fast but not too fast. He loves to push his old school popcorn popper around the house and do laps through our circular main floor. 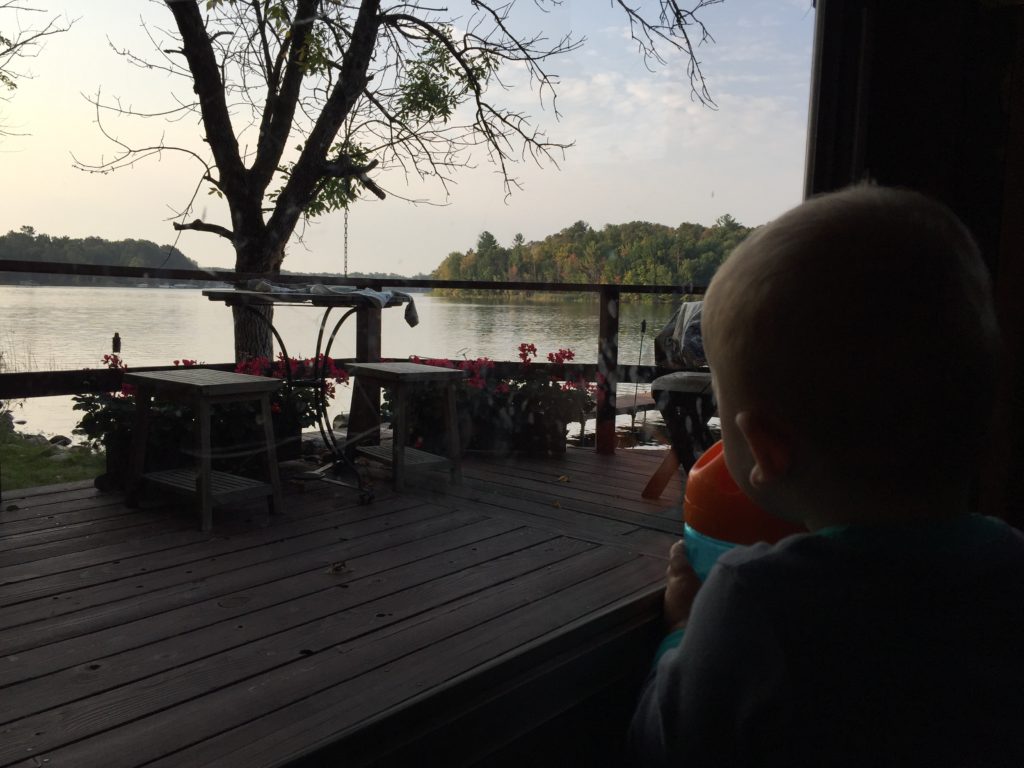 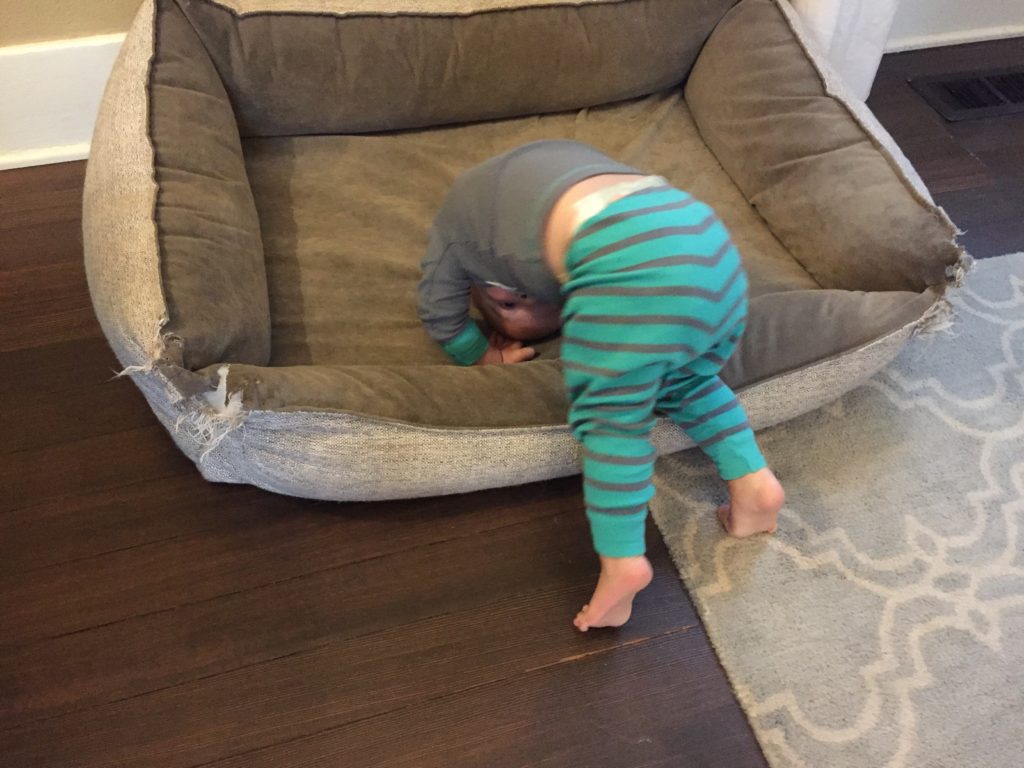 Another highlight of the last month or so has been how focused Ben has become on something that is of interest to him. He has really taken to reading and right now his favorite books are those that have one big picture of something {i.e. a truck!} on it, or really interactive books like touch and feel books. The other day while I was making dinner he sat in Alex’s lap and they read stories and talked to each other for a good half an hour. It was so sweet to listen to. 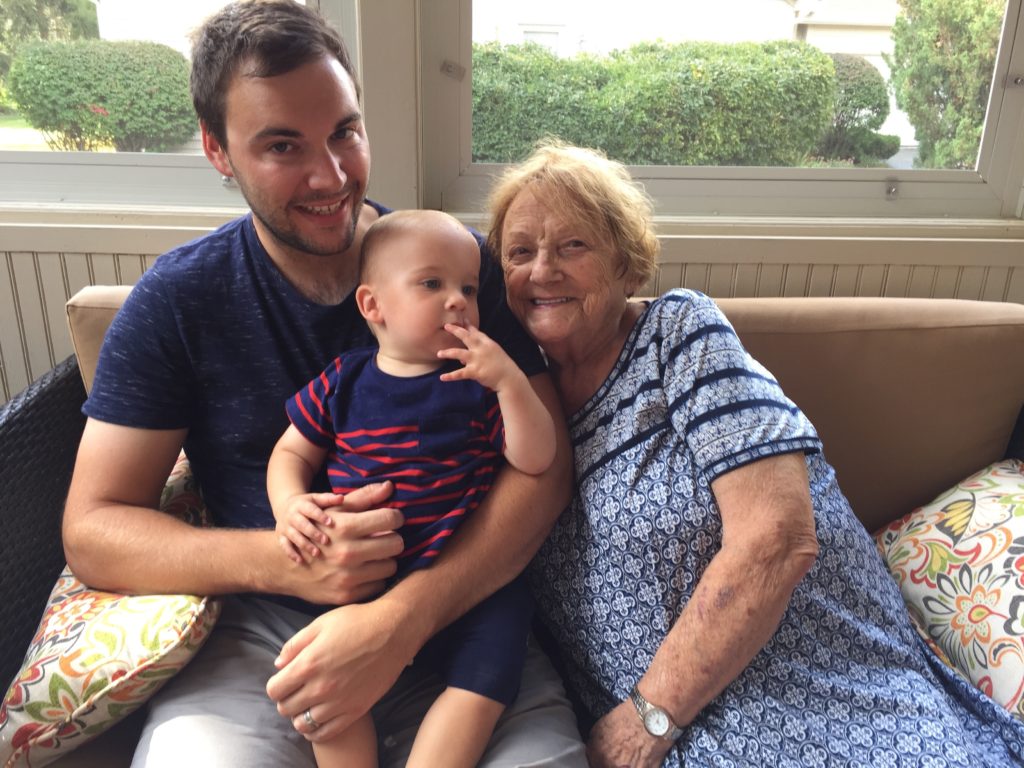 Ben’s personality is continuing to emerge. He is SUCH an entertainer. It is hilarious to watch – he has started blowing kisses as his way to say hello or goodbye and he does things to try to make people smile and laugh. He has begun laughing in appropriate situations – it is so funny. He is really starting to associate his actions with getting a smile from someone. 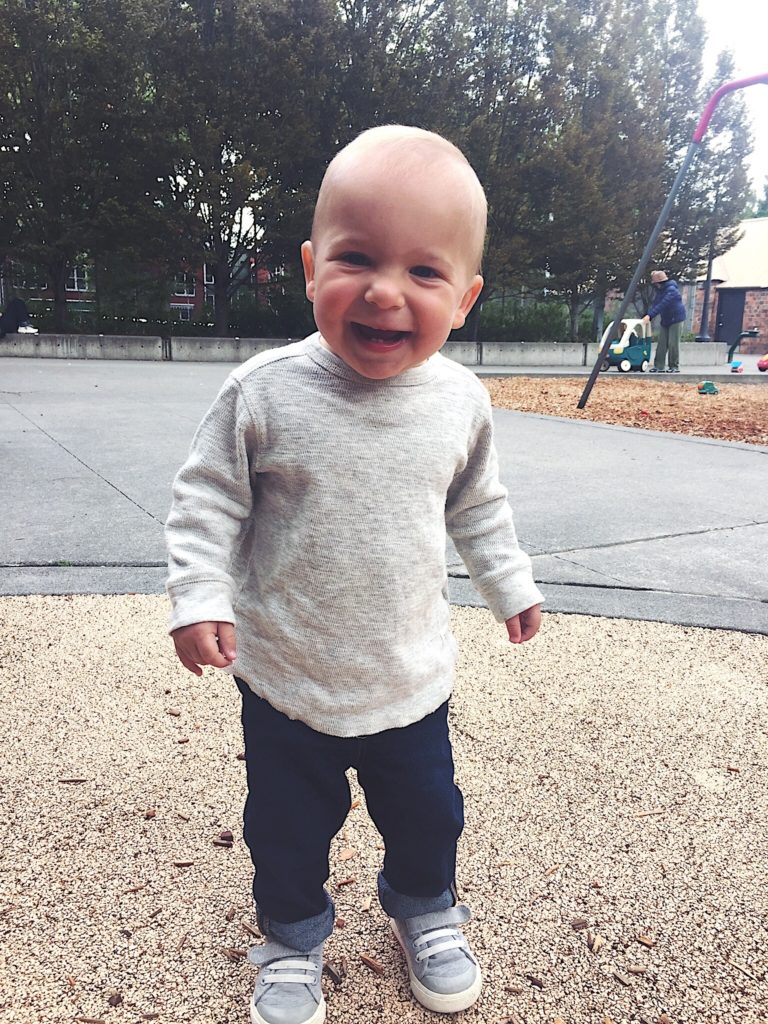 Ben’s demeanor is so sweet. He’s a fun-loving kiddo. He is liberal with the hugs these days and if I’m sitting on the floor with him he’ll walk over and climb right into my lap for a story. He is fairly calm, but also very loud and dramatic at times. If he’s got an opinion about something he is sure to let you know. It is really hard not to laugh if he’s having a tantrum about something ridiculous!

We are really finding that getting out for an active adventure every day is very important. Ben gets to a point where he gets bored if he is cooped up inside for too long. Most days for the last few months have been spent with at least one trip to the playground in the morning and another outing somewhere else. Now that the rainy season is looming over us {not here yet!!} we’re scouring the web to come up with an arsenal of tot activities. Ben tried out My Gym today and did a really cool gym class – I think that’s going to be a weekly thing now! 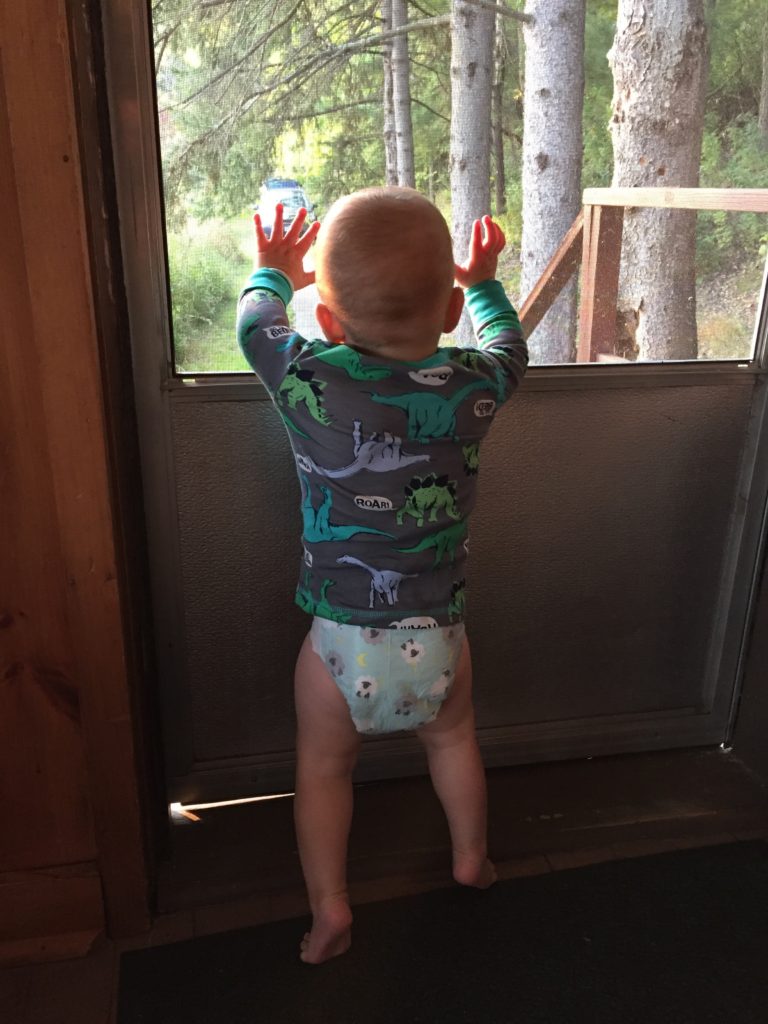 I can only imagine that when I sit down at the end of October {let’s be real, the beginning of November} to write my next month post about Ben turning 17 months that he’ll be talking even more and maybe mastered his somersault. It’s hard to picture what he’ll be like in a month, but I can say for sure that he’s changing more and more every day. This little boy is a blast! 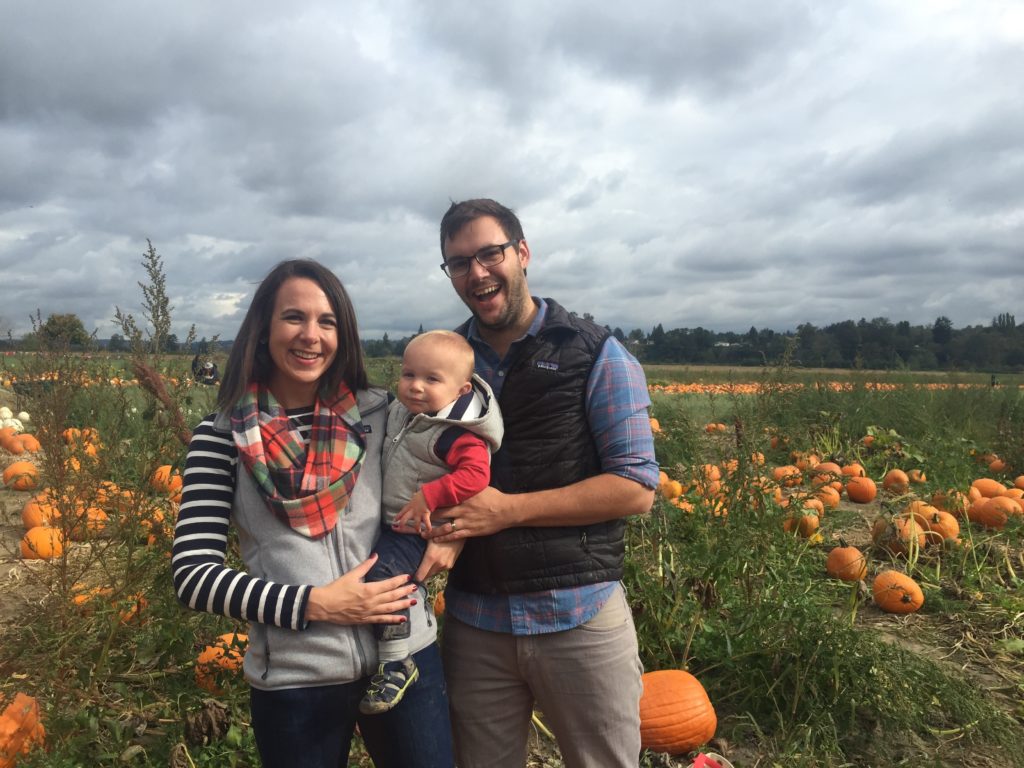